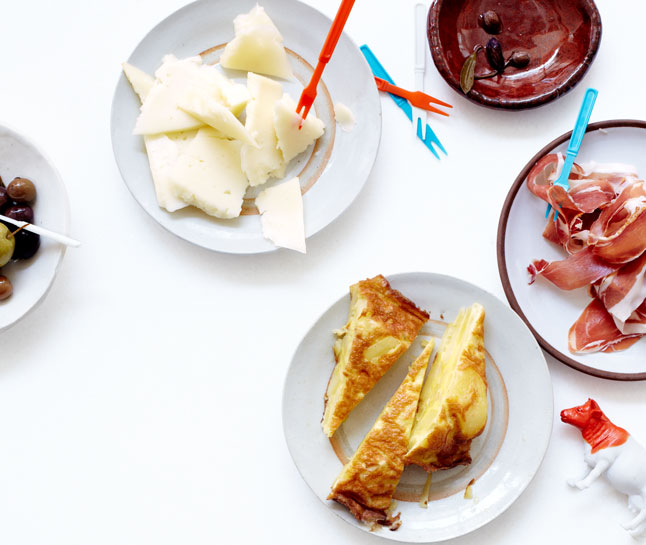 On a freakishly warm night this past spring, we dragged the family (our ten-year-old, our Samba-wearing eight-year-old, and our vegetable-hating five-year-old nephew) to Boqueria, a tapas restaurant in Soho. The reservation was at the Chuck E. Cheese-ish hour of 6:00 p.m., but the place, thank God, was full–and not with a bunch of other families, either. Our host took us to a high table with high stools on one side and a banquette on the other. He asked if we wanted menus, or if we were interested in sitting back and taking our chances. Since we like to think we’re past the phase where one of us has to escort a kid to the bathroom or take a tantrum-quelling walk around the block, we took our chances.

An open kitchen let the kids watch the staff crank out dish after dish until almost 20 little plates were vying for space on our long, happy table. Caught up in the energy, the drama, and the sense of surprise, our gang would’ve tried anything that night. In fact, they pretty much did: squid, Idiazûbal cheese, two kinds of ham, crisp potatoes with a smoky sauce and garlic mayo, fluke crudo with hazelnuts and grapefruit, rabbit (gulp) paella, lamb toasts with salsa verde, flatbread pizzas with mushrooms, and something with ramp pesto that we can’t remember because by the time it arrived our brains were officially overloaded.

True, our nephew eyed the crudo as if it might hurt him, and the Spanish tortilla barely got the shot it deserved, but one look at all the adventurous little fingers sampling whatever landed in front of us, and we claimed victory over boring kid dinners everywhere. These new flavors were embraced, free of parental nagging or pressure (the veggie-phobe even scarfed down a mushroom pizza). Something tells me there’s a lesson in there we can take home. —Andy & Jenny

This post appeared in Bon Appetit’s October Issue (The Restaurant Issue). Andy and I write a bi-monthly column for BA called “The Providers.” Head over to their site for the Spanish Tortilla recipe shown in the photo. Or click here for an archive of all our Providers columns and recipes.

Very cool! Tapas is always a good bet for our kids, too. Our traditional Sunday dinner has become a spread of meats, cheeses, olives, fruit and roasted veggies from our favorite small, local grocer. My favorite part is watching the seven and ten year-old step up to the cheese counter to place their own order. “We’re really liking Spanish cheeses lately. What have you got?”

This post gets me thinking that this strategy could easily be adapted to other meals. Perhaps a tutorial on how “Tapas-o-fy” more traditional meals is in order?

Tara – I think that is a great idea, if only so I can use the word “Tapas-o-fy” as often as possible. Thanks for writing.

I spent the month of May in Spain walking the Camino de Santiago with a group of students from the college where I work. This post made me feel homesick for Spain! Such great food, and I love the tapas style of eating. Lots of creative combos, enough to make you feel full but not stuffed. And the wine…don’t even get me started. Now I want a tortilla!

I know this is a cooking blog, but on the topic of NY restaurants… we are headed there with the family in October. Do you have other recommendations where we can eat with our 2 boys (6 and 4) that will be something we can enjoy but they won’t be completely out of place?

BTW – made the taco soup from the book last week and at least one kid ate it – and he never eats soup. I consider that a major win so thanks! The other just ate the shredded cheese, but that’s a whole other issue…

Thanks Sari. Helena – Look for a New York themed post coming up shortly!