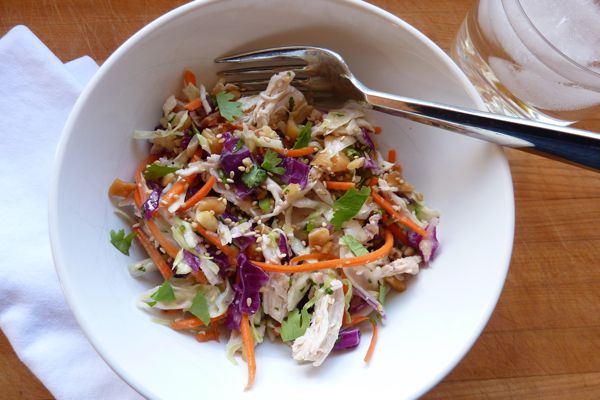 I’ve been so good. Seriously. On Friday I took one last bite of an oatmeal-brownie-butterscotch sundae (true story) and vowed That’s it. That was the last piece of junk that was going down the hatch until…when? That’s always the question, isn’t it? Does it speak to my pathological optimism or my deep-seeded denial that every year I vow to tweak my dietary habits — not the kind that involve a piece of homemade apple pie with the family; the really bad kind that involve shaking the kids’ carseat to unleash the last few nickels I need in order to uncoil the Milky Way Midnight from the vending machine. And every year, I come up short. As in, after few short days, I am right back to my I-hate-myself habits. I mean, how is it that I am already a little less excited by the whole-grain-packed cookbook that arrived on my doorstep today, which I one-clicked in a fit of steely resolve only five days ago. I was going to do it this time! I really really was! (Charlie Duhigg! Where are you when I need you?) This is not to say I have given up…entirely. All of this is merely an attempt to stay one step ahead of my worst self. This year, I’m embracing her instead of pretending she doesn’t exist — keeping my enemy close and all that. In the meantime, my best self has been enjoying some majorly healthy dinners — like this incredibly flavorful shredded salad with chicken that was spiked with a clean Asian-ish vinaigrette. I thought your pathologically optimistic selves might appreciate too. At least for the next few days. 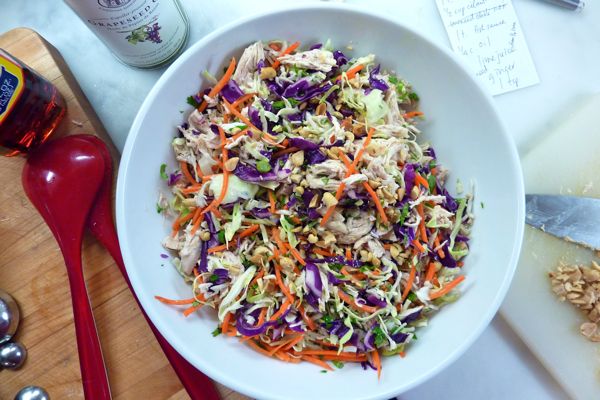 Asian-ish Shredded Chicken Salad
Warning: This recipe has one of those annoying ingredient lines that says “2 chicken breasts that have been poached in mirin and soy sauce for 15 minutes,” as though you just so happen to have that kind of thing lying around with the peanut butter. Feel free to use whatever leftover chicken you’ve got, or, even better, the white meat from a storebought rotisserie.

3 tablespoons rice vinegar
1 1/2 teaspoons brown sugar
1 teaspoon salt
1 teaspoon fish sauce (available at Asian specialty stores and better supermarkets)
lime juice from half a lime
1 teaspoon minced ginger
1 drop of hot pepper paste (or, for heat, you can use hot sauce or mince a jalapeno or serrano chile; we just happened to have this leftover from a 99-ingredient David Chang recipe)
1/3 cup grapeseed oil

2 to 3 large handfuls of shredded cabbage (both Savoy and Red)
half a handful of shredded baby spinach
1 handful of shredded carrots
1 bunch (about 5-6) scallions, white and light green parts only, chopped
1/2 cup cilantro, chopped
2 chicken breasts (poached/simmered for 15 minutes in a pot filled with 3 cups of water, a 1/4 cup rice wine, a little soy sauce, a half an onion) shredded
handful of chopped peanuts to taste
sesame seeds (optional)

In a large bowl whisk together all the dressing ingredients. To the same bowl, add all salad ingredients and toss until combined. If you are afraid your kids won’t like it, separate out the components you are sure they will like and reserve some dressing for them as a dip.

Looks delish. What can I use in place of grapeseed oil? Olive oil? Sesame oil? Peanut oil? Almond oil? I have those and and am not about to add another bottle to the pantry!

Can’t wait to try this! Pinning it too:)

Hi Essie. I used grapeseed oil because it’s so mild. You don’t want anything too overpowering here. Do you have vegetable/canola oil? Maybe use that, but cut back to 1/4 cup and add a few drops of sesame oil? Or just use a mild olive oil. Good luck!

This sounds terrific and I plan to make some version of it in the next few days, although I admit to thinking it would be REALLY good with some of those ramen noodles sautéed in butter tossed with it.

lov, love, love that cookbook. try one of his granola recipes (http://fullplatecookinglessons.blogspot.com/2010/02/cooking-with-little-ones-homemade.html) with your family– everyone can participate and the end result is a made-ahead breakfast served with milk…or combine with yogurt/fruit for make a simple snack/meal. i am trying to focus on breakfast and lunch and be really mindful there, and cutting myself some slack come dinner times as i am often out. it has worked so far!! i am pinning this delicious looking salad to try next week. it looks wonderful!! it’s recipes like this that make a mindful lunch FABULOUS!

This sounds delightful! Crunch and sweet and sour and yummmm. Can’t wait to try it out.

i have to agree, that cookbook is absolutely phenomenal. you should get excited about it again. 🙂 everything i’ve tried from it has been fabulous, i promise.

This looks delicious & I’m vowing (as I just finish up my first trimester) to finish this pregnancy strong: no more milkshakes, midnight pizza runs, or oversized bowls of cheesy pasta (haha!) – I love your blog & thanks for all the great recipes, inspirations & laughs! 🙂

Check out the recipe in that cookbook for New Orleans- Style BBQ Shrimp with Vinegary Black Eyed Peas; it is awesome! My kids (14 & 10) love it. I have made it with pinto beans or black eyed peas; great both ways.

Made this tonight – it was wonderful, I had two servings (oops!) and look forward to more tomorrow.

YUM. Made this tonight, quite possibly one of the best dishes I’ve had for dinner in a while. So fresh. SO GOOD.

This looks fantastic. I’m putting it on my meal plan now!

Sounds great! Definitely need to give it a go, since I am severely challenged in the salad-making area. (Why? What’s so difficult about putting together a not-boring-salad?)

Coincidentally, I’m right now cooking up the Mushroom Stew with Beef Chunks from Food Matters. It smells awfully good, and my kid picked the recipe. We have high hopes for healthy tonight, which’ll be good after my morning breakfast of coffee and cookies. Haaappy New Year!

Made this salad for lunch today. Added a few drops of sesame oil and a jalapeño – yummy, crunchy, healthy goodness. Thanks for this delicious and simple recipe.

added a healthy dollop of sriracha to the dressing and topped salad with toasted almonds. i totally poached the heck out of that chicken in mirin & soy and it RULED.
served it for lunch at a pickling party and everyone asked for the recipe.
very satisfying. being asked, and the meal.

Left this recipe for my husband to work, since I knew I’d be home late. Full-proof and easy to follow. Most importantly, very tasty and filling (usually I’m still hungry after having ‘salad for dinner’). THanks for the great idea!

I feel like a big huge dummy asking this….how do I poach the chicken in the ingredients listed? I’ve never poached!

Tuesday night I made the salad and dressing, minus the chicken, and served it topped with peanut butter soba noodles and salmon. The peanut butter noodles might have diminished the salad’s redemptive properties somewhat, but yummmmmmmmmm. Thanks for a great recipe!

This salad was so good. I made it and devoured a bowl before 12 noon, and re blogged the recipe onto my site.
I am going to make this a summer staple, it’s so easy and delicious.
Thank you. OMG. So good.

Omg!! Worth all the work! This was amazing!!!!!
I also bought a package of cabbage for coleslaw and added red cabbage -delish!!!

This was tasty and what we needed to get back into gear after a weeklong vacation. But I found myself wishing for cucumbers the entire time I was eating it — next time!!

Oh Jenny. Seriously, I’m eating this right now and it is so insanely good. I had some rice noodles on hand and they only take 2 mins to cook so I added those to the dressing and it was perfect for a hot summer night. Thank you!!

I love this website – its so usefull and helpfull.|

This recipe is the gift that keeps on giving!