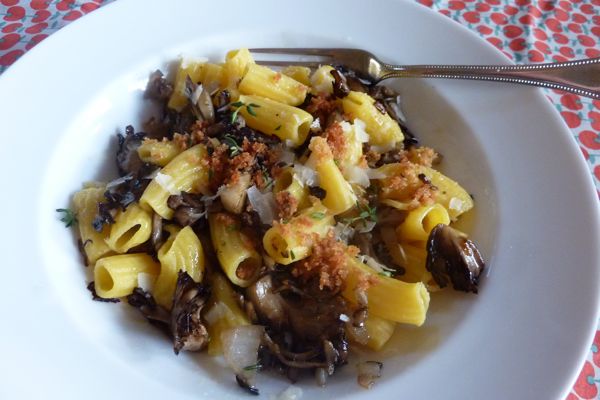 Last week, as you may have noticed on my visual market post-mortem, I came home with a pile of cool-looking maitake mushrooms from the farmer’s market. I probably sound like I know what I’m talking about, but in truth, I had never heard of maitakes before I spied them on a vendor’s table next to the Lion’s Manes (another new-to-me variety) seven days ago. Phoebe was with me and asked what they were. I told her I didn’t know but I was going to buy them anyway because they smelled so off-the-charts rich and earthy. She asked, You’re going to eat something you’ve never heard of? I told her yes — Isn’t that what I’ve been asking of you and you sister for the last eight years? I liked being able to impart that lesson to her — that just because I am a grown-up who gets more excited by a clean sink than a Bourne movie  — doesn’t mean I ever have to lose a sense of adventure at the table. I also liked being able to eat this particular adventure tossed with fresh eggy pasta and Parm. 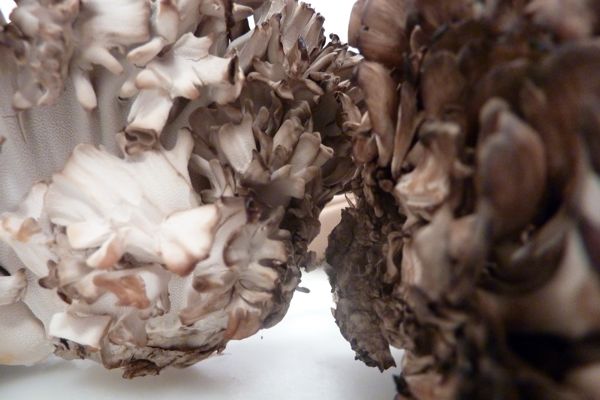 1 pound fresh rigatoni (I used egg, but you can use regular or whole wheat and I’m sure no one will come knocking)
2 tablespoons olive oil (plus a little more for later)
1 or 2 cloves garlic, minced
1/2 medium onion, chopped
dash of red pepper flakes (optional if your kids don’t like heat; but they probably don’t like mushrooms either, so might as well throw it in)
1 to 2 cups maitake mushrooms (or whatever fresh mushrooms you foraged at the market today), cleaned and chopped into bite-size pieces.
zest of 1/2 lemon
salt & pepper to taste
1/3 cup bread crumbs
1/3 cup Parmesan
handful of fresh thyme or parsley

In a medium pot, boil water and prepare pasta as directed. Drain, place in a large bowl (separating out pasta portions for kids who won’t eat mushrooms) and toss with a tiny bit of olive oil to prevent sticking.

Meanwhile, in a large skillet over medium-low heat, add olive oil and saute garlic, onion, and red pepper flakes until onions are soft, about 5 minutes. (Garlic shouldn’t burn since it’s “embedded” in onions.) Turn up heat slightly and add mushrooms, cooking until they release their liquid, about 3-5 minutes and adding more oil if you feel the mixture is too dry. Stir in lemon zest, salt and pepper and transfer to the bowl with pasta.

Turn up the heat to high and add another generous glug of olive oil. Add bread crumbs and cook until toasted and crispy, about 1 minute. Add to pasta bowl along with Parmesan and fresh herbs.

This looks super delicious. I may have to give it a try. What can I tell my kids mushrooms are so they will eat them? LOL

Liz–bunny umbrellas? (from the Richard Scarry book, “I am a Bunny”: “When it rains, i keep dry under a toadstool.” accompanied by one of the best pictures ever of all time in children’s books.) Jenny–did you take that picture of the mushrooms? Gentl & Hyers, look out! and about the recipe: yum

oooh i love maitake mushrooms! if you like maggi sauce, try a quick stir fry with chopped green onions and a dash of maggi (go easy on maggi, it’s salty)

Love your website, so glad I stumbled upon it. But…if you could make your recipes more printer friendly, I’d love it even more. Just a thought.

Esther- I am working on it. Printer-friendly versions will be available very shortly. Stay tuned!

Mmm…I can’t imagine anything better than cheese and mushrooms and pasta.