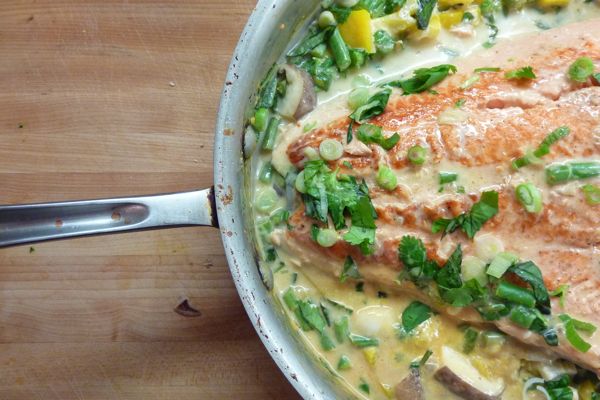 If you’ve been following this blog for a little while, you know by now that salmon was the first fish our kids ate. Which was fine by us — it was healthy, flavorful, and one of the few foods (in general) that we could all eat the exact same way at the dinner table. So we ate a lot of it. A lot of it. With yogurt-mustard-dill sauce, with hoisin glaze, mixed into salmon salads and salmon-rice bowls. At Japanese restaurants, I’d watch with both pride and horror as Phoebe would peel off the salmon from my sushi with her fingers then dangle piece after piece into her mouth. We have eaten so much of the omega-3 powerhouse in fact, that on Sunday Andy found his heart sinking a little at the fish counter when Phoebe pointed definitively at the wild salmon filets. Her choice for dinner.

What was he going to do, say no? No, he wasn’t. So he also picked up some coconut milk and lemongrass — ingredients that are not regularly in our pantry — and got motivated to make something that was different than any other salmon we’ve eaten. And he did. Browning the salmon in a skillet then letting it finish cooking in a pool of aromatic coconut milk gave the fish the most delicate texture — almost like it was poached.  Goes without saying that we will be eating it again soon.

Salt and pepper a 1 1/2-pound salmon filet. Heat skillet to medium-high heat and add a little canola oil. Place salmon in skillet flesh side down and cook for about 3 or 4 minutes until nicely browned. Remove from skillet. Reduce heat to medium-low. Add 1 tablespoon finely minced lemongrass (from the white part of the stalk) and 1 tablespoon chopped scallions and stir around for one minute. Then add 2/3 of a (14-ounce) can of light coconut milk a generous squeeze of lime, and 1 to 1 1/2 teaspoons Thai red curry paste (to taste). Whisk together and let simmer for five minutes. Add salmon back in, skin-side down, nestle into the sauce. Simmer (uncovered) for 10 minutes, then add a handful of each of the following: chopped green beans, chopped yellow peppers, chopped shiitake mushrooms. Simmer another 7 to 8 minutes. Stir in 1/4 cup chopped cilantro, 1/4 cup chopped basil. Cook another 5 minutes. Serve with jasmine rice, more cilantro, scallions, and a squeeze of lime.

Oh god yes, salmon (again! aghhh) but with new twist. Thank you. Sincerely. We eat an awful lot of it too.

I don’t even eat that much salmon, but I still get sick of the same old tried and true preparations. I was just wondering what to do with the Costco bag of frozen salmon I just bought…now I know! I definitely want to try this – I am a Thai food fanatic!!

The title of this post got me! We eat salmon at least once a week and usually we prepare it in the same old way (cooked in little tinfoil packets in the oven with a bit of butter and dill). After a while it gets boring! This recipe sounds super yummy. And I love that you can basically make it in one dish.

thanks. I am sick of salmon and am thrilled to see this!

As much as I like salmon, I agree that I can only eat it every so often.

Great stuff! Next time I think about cooking salmon, I think I’ll give this recipe a try.

I think I’m going to make this tonight! I am not tired of salmon at all- we cut back on buying it as often once Costco stopped carrying the wild salmon and I have to hunt it down elsewhere 🙂

Can you do this with other fish besides salmon? My kids won’t eat it.

This looks really, really good. With a Singha for me and a passion fruit spritzer for junior!

We had this tonight when some friends came over. It was delicious, and I felt like I was on a cooking show in a demo kitchen when everyone was watching me make it. One tip is that you can buy a big bag of frozen finely chopped lemon grass at the Asian market. It’s more flavorful and less woody than the stalks that dry out at the grocery store. I have to admit that I added 2 tbsp of brown sugar like I often do when making “thai-ish” dishes:) Like you, I’ve patted myself on the back because my 8 yr old twin boys have eaten salmon as long as they’ve eaten solids. I have been the problem the last 6 months…tired of salmon. You have saved us from a major salmon slump. Thank you…thank you–EVERYONE gave it a thumbs up!

I’m so excited to try this recipe. It looks delicious!

I made this and your chocolate mousse recipe for Valentine’s dinner tonight. My boys wouldn’t touch the salmon, but my husband and I loved it!! The chocolate mousse disappeared quickly. Thanks for all your recipes and tips…I think your blog is amazing!

Thanks for throwing this recipe out there! I used half a can of Maesri green curry paste (as well as some lemongrass and kaffir lime leaves from the garden) for seasoning, and a bunch of veggies out of the fridge, and it was a great, super quick dinner. We had some frozen salmon from Costco languishing in the freezer (we’re spoiled by freshies caught by my uncle, so the frozen doesn’t really quite cut it for my family) and it was perfect over brown rice.

I love this idea and bet my boo boo would eat it.

recipe sounds great! I would substitute extra virgin olive oil or coconut oil for the canola to make it even healthier!

I am a terrible cook but I’m giving this a go tonight… LOVE salmon and your recipe sounds idiot proof so can’t wait – thanks for the recipe!

This dish… is fab. It is easy and fun to cook, quick, and as I eat it, I feel like I’m having a dish at my favorite restaurant. I used wild Alaskan Coho salmon and I used regular coconut milk, not light, which might have been a bit reckless of me, but tit made the dish so decadent. This dish looks beautiful, too. I served it with a mix of Israeli couscous, orzo, and quinoa. Thank you for this recipe!

Made this recipe (with little tweaks because I did not have all ingredients) and it was superb!

I am part of that group that loves salmon but was tired of eating it on the same way.

Oh coconut milk with salmon, I have never tried it before. Thank you for the recipe!