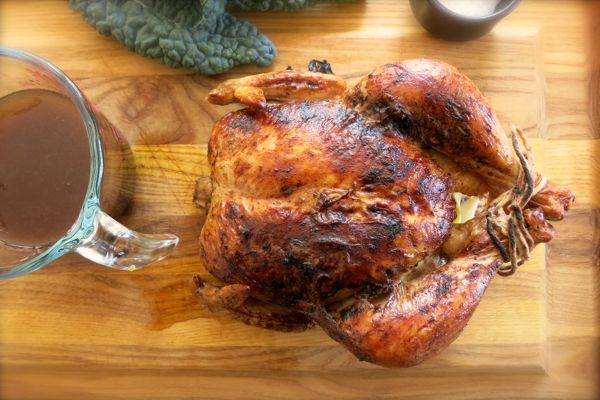 It took me a little while to find my go-to roast chicken, but once I did, there was no going back. Those of you who have happened upon the recipe (page 287, Dinner: A Love Story) know why: It’s low on ingredients, forgiving if you miss a few of those ingredients, and doesn’t require changing oven temps or flipping the bird over and back again. It’s about as straightforward as they come, which is probably — no definitely — the reason why I always go back to it. Every now and then, when I’m about to brush the melted butter on top, I’ll think to myself I should try something new here, before thinking, Nah. If it ain’t broke...

Then again, I just wrote an entire book on busting out of a dinner rut. A cornerstone of the book’s philosophy? If it ain’t broke, fix it anyway. I’ve always found that introducing new things  — new techniques, new ingredients — to my dinner routine as often as possible is the best way to keep things interesting. And when things stay interesting, I stay motivated. So I hunted around for some options and came up with just the slightest twist on my chicken, a salty, silky mirin glaze that stopped the conversation at the dinner table (always a good sign).  It wasn’t a lot, but it was enough.

Melt the butter over low heat in a small saucepan. Turn off heat. Add onions and carrots to a deep roasting dish and toss with olive oil. Place the chicken on top and stuff with lemon and garlic (no need to be artful about this). Tie the chicken’s legs together with kitchen string, then brush the chicken all over with about a tablespoon of the melted butter. (Do not discard the butter that remains in the saucepan; you should have about 3 tablespoons left.) Sprinkle salt and pepper all over the chicken.

Roast chicken for 45 minutes. Meanwhile, add soy sauce and mirin to the melted butter. Turn heat to medium-low and stir until everything combines. Remove from heat and let rest on stovetop.

After 45 minutes, generously brush chicken with mirin glaze. Roast another 20 minutes. Glaze again. Roast another 10 until chicken is cooked through and the legs wiggle easily.  (The general rule for making sure a chicken is done is to roast about 18-20 minutes per pound.) Slice and serve. The chicken is moist enough to stand on its own, but if you want gravy, continue with instructions below. 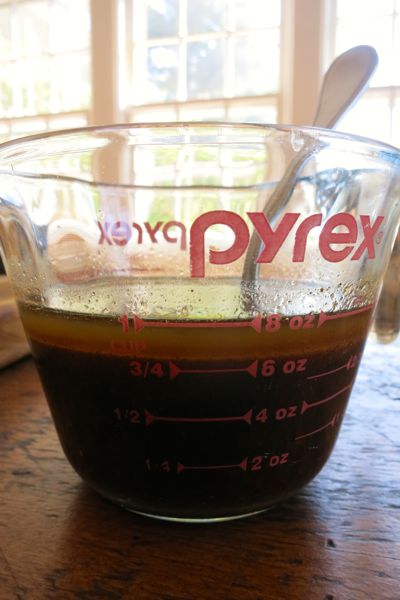 A Note on Gravy: So until fairly recently, gravy-making was a little terrifying to me — my knowledge of the process was limited to watching my mom mix a Knorr powder into the pan juices on Thanksgiving. I don’t know what psychological switch flipped, but for the past half dozen roast chickens, I’ve taken the initiative to experiment a little. I am not very close to being able to give you exact instructions yet, but I will say that it involves whatever juice is left from your chicken, some butter, and a little bit of flour. Here’s the rough idea:

2) Heat roasting dish over medium heat (or transfer to a saucepan if your roasting pan is not stovetop ready) and add a drizzle of chicken broth so it looks sort of like this: 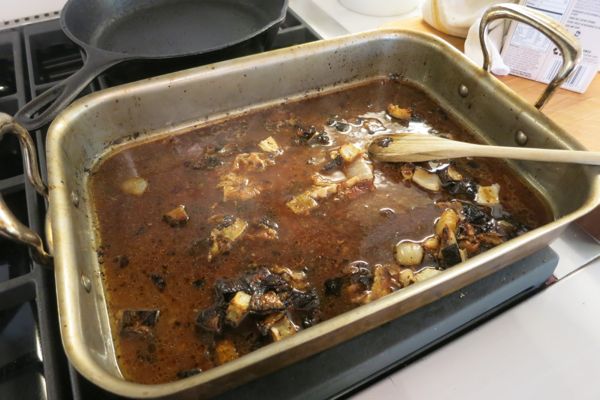 3) Then scrape all those bits with a wooden spoon until everything is cleaned off the bottom of the pan. (Those burnt onions? They’re your friends.)

4) Strain the whole thing over a bowl or a heatproof Pyrex measuring cup as shown above. Discard strainer contents. Let juice in pyrex sit for a little while so the fat separates. Remove that fat with a spoon.

5) Add back to a small sauce pan. Add 1 tablespoon of butter (about) and a tablespoon of flour. Whisk constantly over medium-low heat. Add flour in small increments until it reaches what you consider desired gravy consistency. I like mine on the thinner, less gloppy end, but you might be different. Serve drizzled over chicken — and anything else on the plate.

There is nothing better than a traditional roast chicken with the family – I must admit that I love cooking it the best as once it’s done you get to taste all the good bits first
This recipe seems like a nice change and sounds delicious!

I agree Victoria. Sunday dinner + Roast Chicken = Magic. That’s what I meant to do this past weekend before soccer got in the way — Much to the delight of the girls, I ended up going all Sunday on Monday.

Thanks for the primer on the gravy. I love making roast chicken, especially when the weather turns cooler. But homemade gravy has always eluded me. It always turns out lumpy and so not like the jars of Heinz I have had to resort to buying. It’s very comforting to know that you have been mystified by the process too!

My go-to roast chicken is Sara Moulton’s 40 garlic cloves…never disappoints. But i’m game to try something new! (not gravy … I don’t like all that work at the end when i’m trying to get everything to the table.) so, where does one buy mirin? it’s always been a page-turner for me.

I’d love to try this with individual chicken breasts or thighs. Thanks for sharing!

I’m a Knorr child too! So I’ve always been intimidated by the whole real gravy process–you’ve inspired me to give it a try–the photo and step-by-step are great. I’ll let you know how it goes this Sunday!

I’m ready to break out of my roast chicken rut. “My” version is a fairly basic lemon/garlic/butter/thyme thing that’s a mash-up of recipes from Jamie Oliver and Nigella Lawson. I think I’ll try this one this fall.

Looking forward to having this for dinner sometime this week. Sounds absolutely delicious and I imagine any leftovers would be fantastic in a salad. http://www.clementinebuttercup.blogspot.co.uk

it took me way too long to roast a chicken. like i did it last year. shameful right? glad to see an asian variation.

I just bought a whole chicken today and I can’t wait to try this. Perfect timing, Jenny!

I know from your article in Real Simple that mashed potatoes are the ultimate comfort food for your girls, but for my boys it’s a roast chicken all the way. Now that they are in their early teens I have to make two full chickens for family dinner (they really do eat that much!), but thankfully it isn’t any more work that roasting one!

I love the endless possibilities of roast chicken. We usually do a classic garlic, lemon, tarragon roast, but sometimes I’ll roast it with yoghurt and Chinese 5 spice, or mayonnaise (you didn’t hear wrong) and Indian spices. Great with guinea fowl, too – just treat exactly the same as chicken. All delicious, and simple enough for a weeknight.

@Jan: That’s what I do when my boys are around – 2 smaller birds seem to yield more meat than one big one (mine love dark meat, so extra legs and thighs are a bonus), and it’s the same amount of work.

And, there’s the terrific left-overs for lunches/snacks/whatever for the several days following. Stir-fries with added veggies. So many possibilities! I save the carcass and add fresh chicken to make a broth or chicken noodle/ chicken dumpling soup. By walking us through gravy-making steps, you help expand the deliciousness factor of our meals! Thank you!

When I first started cooking, I too was afraid of gravy! I didn’t like the last minute idea when everyone was in the kitchen watching. So I came up with a gravy I could make ahead. Melt 3tbs butter, add 3 tbs flour and stir. Cook for about a minute. Add 2 cups chicken stock while whisking. Season to taste with salt , pepper and thyme. I usually add a splash of white wine vinegar to brighten it up. I then add some of the drippings from the roasted chicken. I keep it warm. It thickens as it sits so I sometimes have to add more stock.

Um – YUM! Ever since the slight chill hit our air I’ve made like, 5 roast chickens! There is just something badass about cooking a whole chicken, I love it.

This one was roasted with chimichurri butter and it was to die for! My husband wanted to marry me all over again. 😉

What a delightful twist on a trusty go-to. @MM your flavor combinations are intriguing, taragon + Lemon+ Chicken, little piece of heaven.

@Dana: Some of them sound a little unusual, but, trust me, they all work!

This looks delicious! I have chicken thighs and legs in the fridge – would this recipe work with a cut up chicken, and how should I adjust the cooking time?

Conveniently, I just bought mirin for a salmon recipe. This one just might be next up (and thank you for reminding me about Sam Sifton’s Thanksgiving!)

Recipes always call for whole chickens that weigh “3-4 lbs”, but I have never found a whole chicken that weighs less than 5 lbs–and usually if I can find one that’s closer to 5 lbs than 6, I feel triumphant. What am I missing?