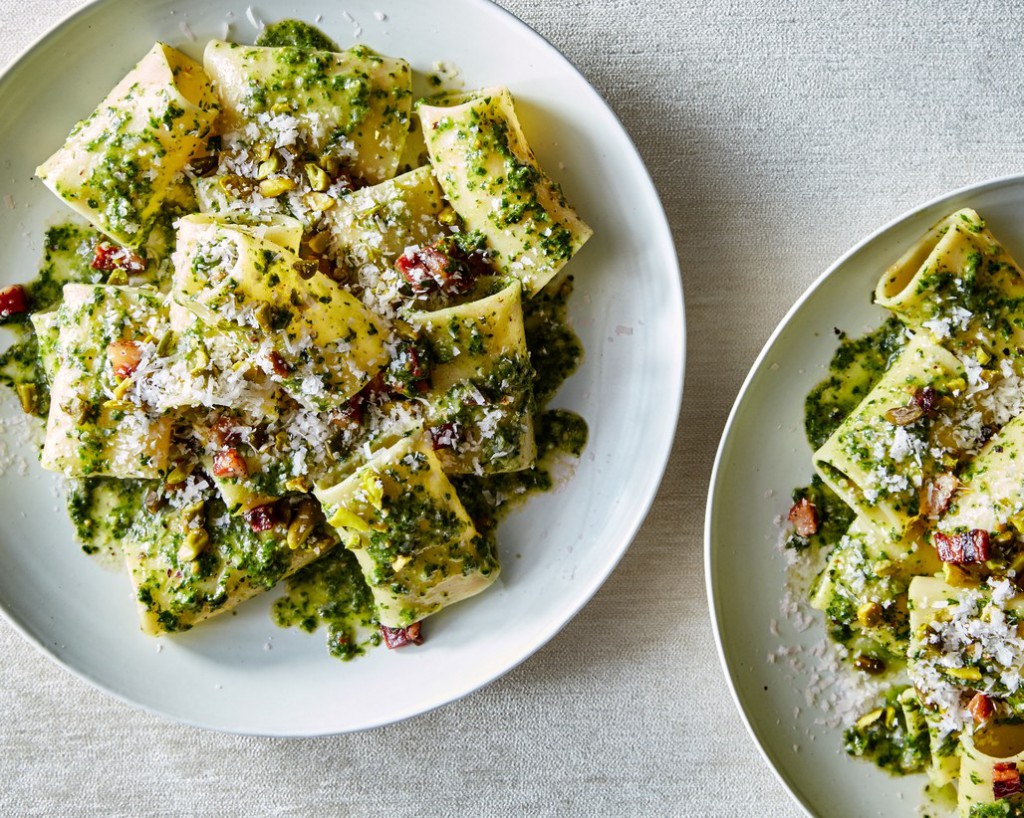 For the last few weeks, when dinnertime rolls around I haven’t found myself where I like to be the most, namely sitting around a table with my family, downloading the day’s events over a plate of something quick and fresh. Instead, I’m sitting in a parking lot or on bleachers or walking around a track waiting for a practice to end. I had been warned this day would come, I had been warned that the older the kids, the later the practices, so I’m not complaining. Especially since it gives me some time to catch up on the podcasts I can’t listen to (or I’m not allowed to listen to) when the kids are in the car. Pod Save America saves me on Mondays and Thursdays, The Daily saves me…daily. Reply All and Alec Baldwin round out the rest of the week. But my favorite way to check out of the truly insane news cycle, if only for 45-minute bursts, is the Bon Appetit Foodcast. Last week, waiting for soccer to end, I found myself listening to Carla Music (food director) and Andy Baraghani (senior food editor) talking about spring pastas in their usual animated and highly opinionated way. Maybe it’s because I was eating a stale Kids Clif Bar at the time; or maybe it’s because one of my daughters doesn’t eat pasta, so I go through phases when I really freaking miss it; or maybe it was just because I realized it was already May and I had yet to take advantage of mint, peas, leeks, asparagus, ramps, greens, and other spring VIPs…Whatever the reason, I have not been able to get their creamy, greeny, spring pastas out of my mind since listening. It’s a problem I intend to solve as soon as possible. To that end, a round-up of what’s in the running for dinner this weekend, beginning with the above, Pasta with Ramp Pesto and Guanciale, from Bon Appetit. (photo credit: Gentl & Hyers). Others that have me dreaming… 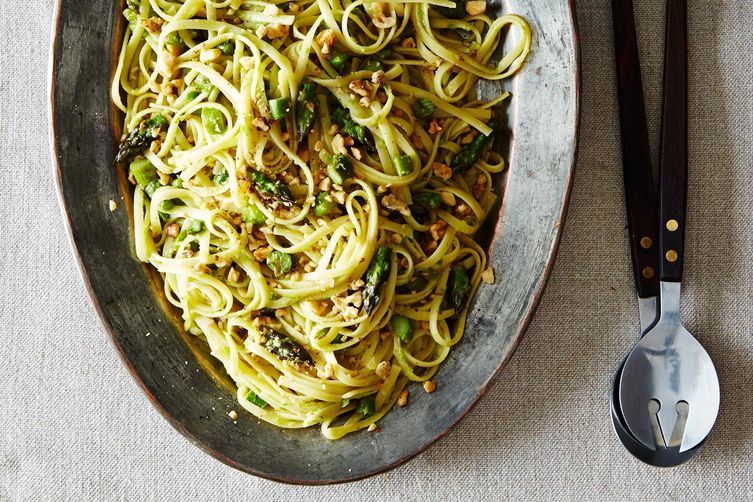 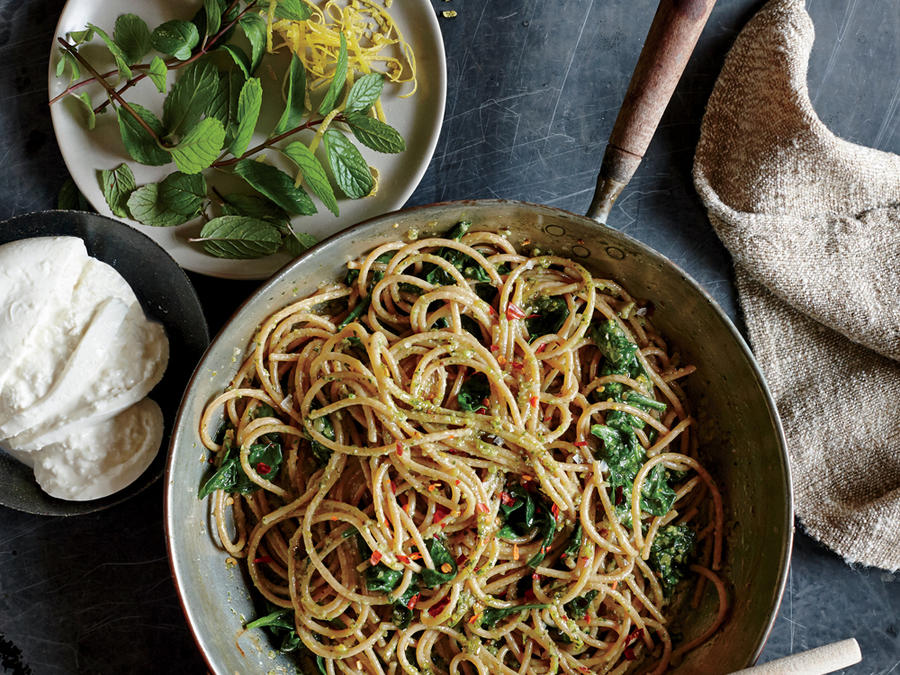 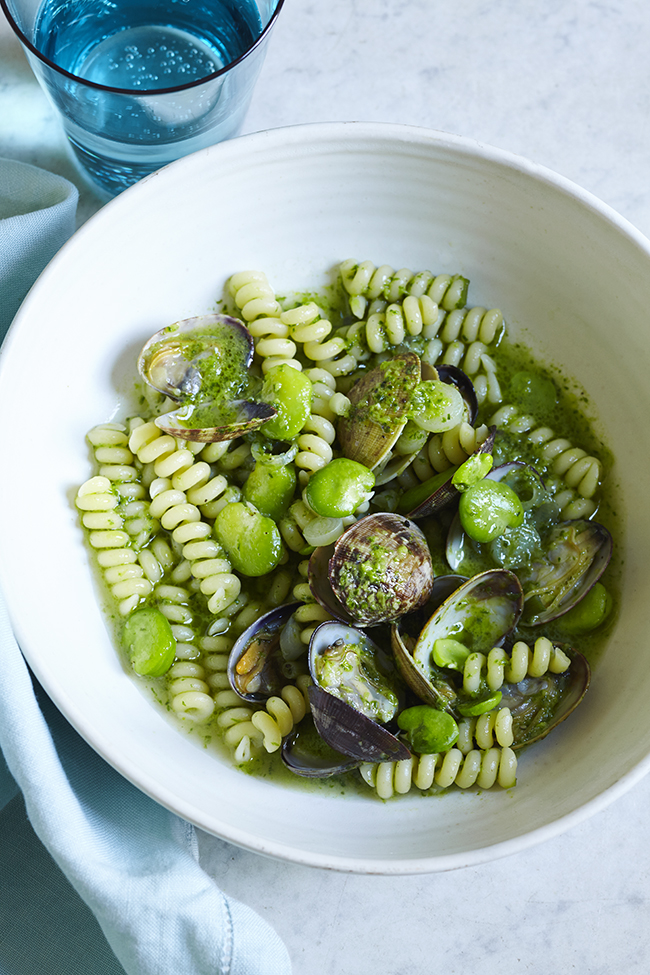 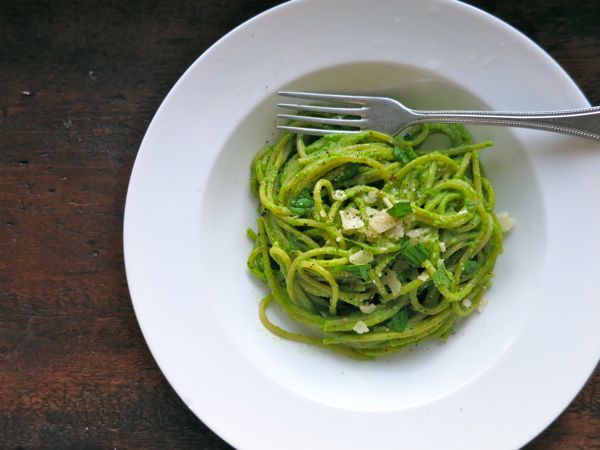 Spaghetti with Mint-Pea Pesto from…DALS. (Also: This homemade pasta with mushrooms and peas that we made exactly a year ago was pretty killer.) 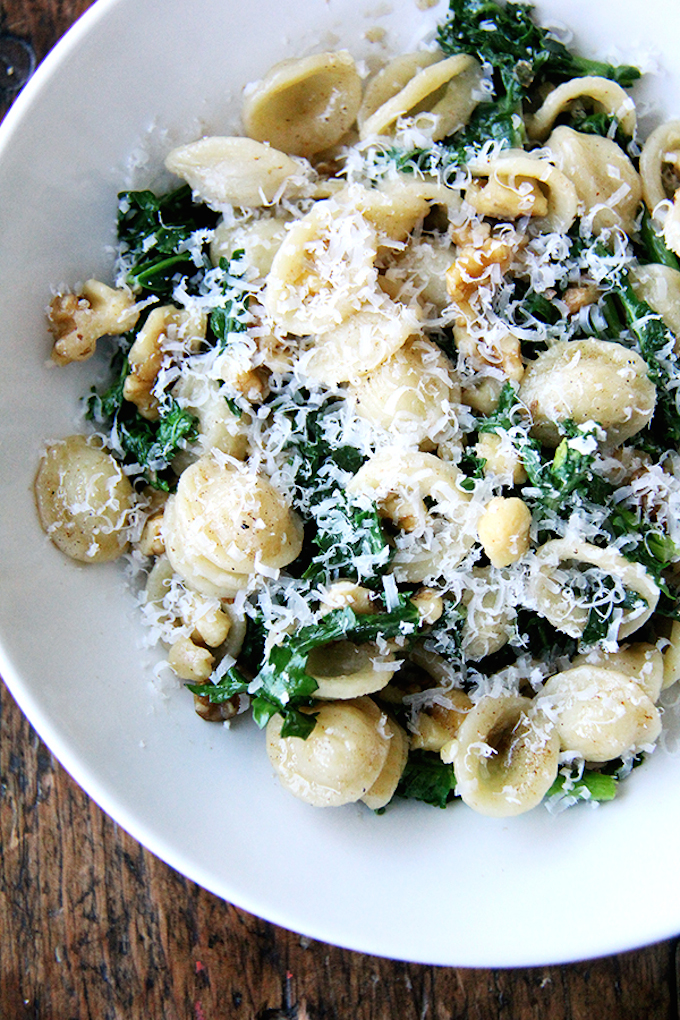 Pasta with Spring Greens (from Alexandra Stafford via Cup of Jo) 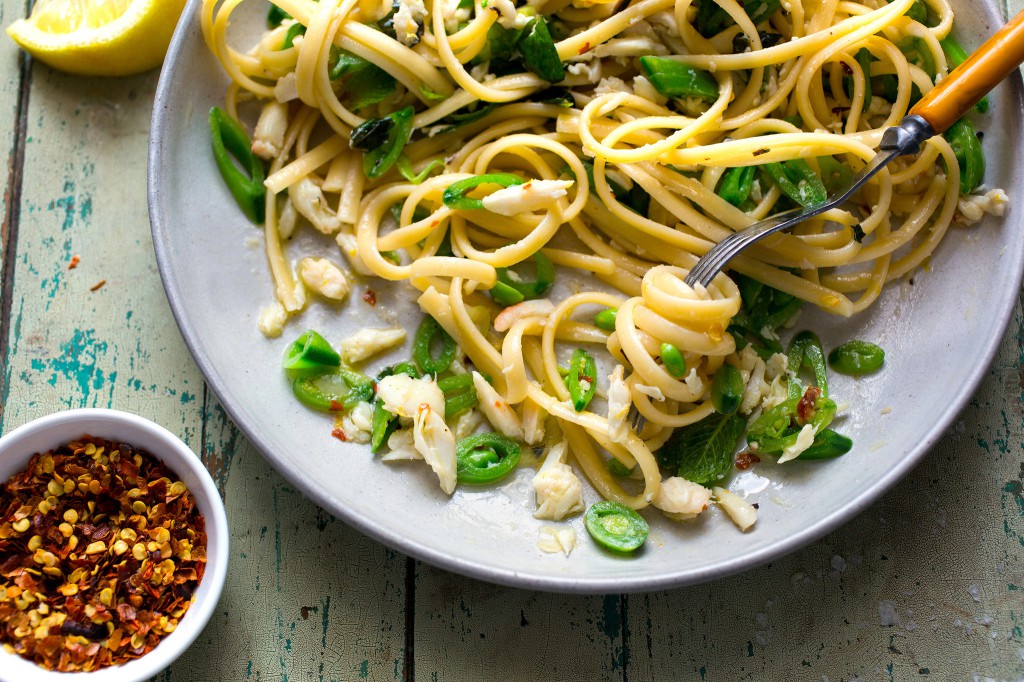 Two from Melissa Clark who always delivers: Crab with Snap Peas and Mint (above) and Pasta Primavera with Asparagus and Peas. (Both from The New York Times; Photo by Andrew Scrivani.) 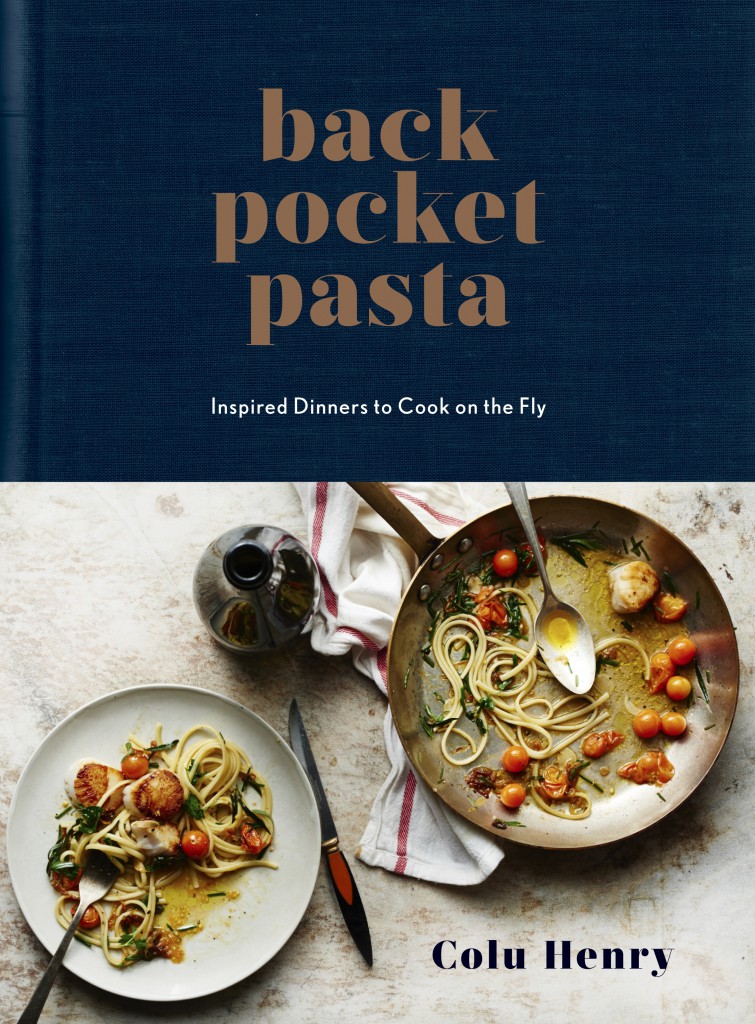 Lastly: Pasta with Bacon, Peas, & Leeks from Back Pocket Pasta, by Colu Henry. It calls for bacon, but you can use pancetta, or prosciutto too, and — lucky us — they let us run the recipe below.

Bring a large pot of water to a boil. Add 2 tablespoons of the salt and return to a rolling boil. Add the pasta and cook until al dente according to package directions.

While the pasta cooks, prepare the sauce: Cook the bacon until crisp in a 12-inch skillet over medium heat, stirring often to make sure the bacon does not burn, about 4 minutes. Remove the bacon and set aside on a plate lined with paper towels.

Pour off all but 2 tablespoons of the bacon fat, add the leeks to the skillet, and sauce over medium-low heat until they are translucent, about 4 minutes. Season with salt and pepper.

Add the pasta and peas directly to the skillet and toss to coat. Increase the heat to medium-high, sprinkle in the bacon, and toss again, adding 1/4 cup of pasta water or more (up to 1 cup), as needed to loosen up the sauce. Season with salt and pepper if desired.

Plate in bowls and sprinkle with parsley. Pass the grated cheese at the table.

Mmmm, pistachio-mint pesto… Lynne Kasper has several variations; the one posted here looks yummy. If you can’t imagine the combo of pistachio and mint–don’t try, just make it! And by the way, mint should be added to just about everything right now, from supermarket strawberries (sigh, it’ll be a month before we have local ones in Syracuse) to chopped meat to a pitcher of ice water. Basil gets all the love, but mint is even more flexible.

Thank you thank you! I have begun the endeavor of “cooking the seasons” and it’s both overwhelming and challenging to narrow down what to make. Thanks for helping me plan for next week!

I agree that Pod Save America is wonderful. Podcasts basically get me through the tedium of the week. And I consider a new easy pasta recipe a Godsend. Thank you!

This weekend I made your Beef and Broccoli and your bake sale cake! OMG, the kids loved it. Granted, only the adults ate the broccoli, kids stuck with carrots and corn. Both recipes were easy and soooo good!

Ramp pesto is one of my favorite things. I buy a ton of ramps (10 bunches so far) and turn them into pesto, which I freeze so I can have it all year round.

This is our first year on a summer swim team and meets are all day Saturday aka the only day my favorite farmers market is open every week. Which means I’m missing out on all springy-summery produce. The struggle is real.

Just returned from a cold, rainy, wet trip to the Green City Market with Pod Save America on the radio and starting to stockpile recipes for the beginning of CSA season. Going to make orecchiette with italian sausage and rapini tomorrow night because the girl who doesn’t like bitter greens is on her 8th grade rafting trip and the boy (who does) is back from his freshman year of college.

I was trying to figure out what to make for dinner tonight, without having to go to the grocery store. I just happen to have all the ingredients for the Bacon, Pea & Leek Pasta in my kitchen, just begging to be turned into a delicious spring dinner. Thank you for the dinner inspiration!

Nice set of recipes here, thank you for putting these together! Haven’t ever seen a lot of these variations before, so thank you!

I will have to check out the “Bon Appetit” one- these pasta’s look amazing.