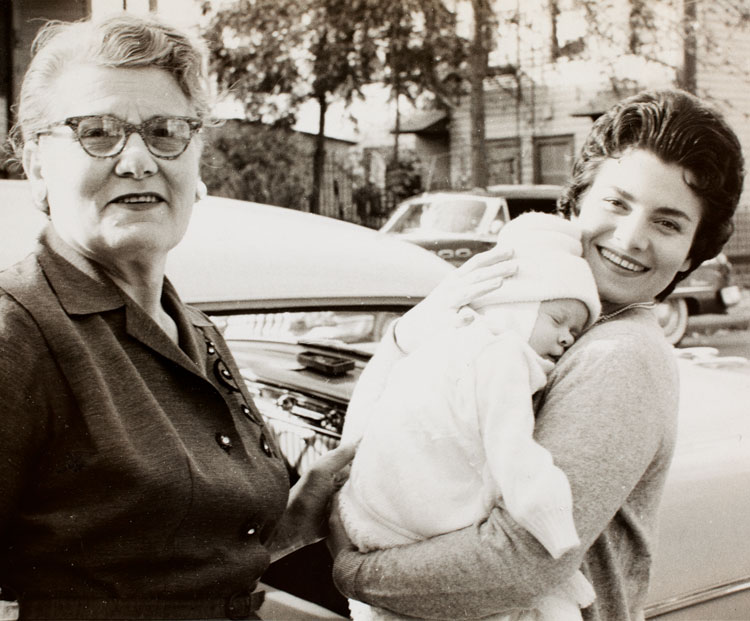 Once I was half way through Alex Witchel’s All Gone: A Memoir of My Mother’s Dementia. With Refreshments I stopped underlining passages and moments that I wanted to remember. There were just too many. Witchel’s mother, a college professor and one of the few working moms in their 1960s suburban New Jersey neighborhood, cooked more out of obligation than joy (“Del Montes was her farmer’s market. Everything was in season, and syrup, all the time.”) but it didn’t matter. The aromas of her mom’s cooking signaled a “safe harbor” for Witchel and once she began losing her bright, spirited mother to dementia, she looked to the kitchen to reclaim her. As Witchel asks, “Is there any contract tighter than a family recipe?” We are lucky to have Witchel, a longtime repoter at The New York Times, guest-post for us today about Hanukkah memories with her mother. – Jenny

When I was growing up, I realized early that Hanukkah was a raw deal. No tree, no stocking, no cookies, no carols – and school was open, at least every weekday. Eight nights of presents were little consolation. The first and last nights were for the good ones like Candyland, or the plush, cuddly stuffed animal I had spent weeks coveting. The nights in between fizzled with unloved items like Pez dispensers or calendars for the coming year emblazoned with the name of my parents’ bank. The Hanukkah gelt, those gold foil-wrapped chocolate coins were okay, though they never lasted long enough to make much of an impression. Certainly not as long as that spinning dreydl which was such a bore it made jacks seem like an Olympic sport.

Yes, we always had latkes and they were always great. It’s hard to fry potatoes and lose.

Dinner on the first festive night was built around them; my mom usually made her brisket, which for me was the side dish to the latkes.

By the last night of Hanukkah, after a full week surveying our long faces, she rallied. Now there was sufficient distance from Thanksgiving, so she felt free to roast another turkey. No more latkes – in those days, pre-Cuisinsart, pre-blender, she had to hand-grate the potatoes and onions, and after a full day at work, she had no interest in competing for Jewish saint of the year. But there were plenty of side dishes – kasha varnishkas, barley and mushrooms, spinach kugel. She bought the first two from the deli, but she made the spinach-spiked noodle kugel herself. It was my favorite. (I am not sharing the recipe because all you need to know are these three ingredients: stick margarine, non-dairy creamer and Lipton’s onion soup mix). Live and be well.

Unlike the first night of Hanukkah when we ate in the dining room with the white tablecloth and the good china, this dinner was served at the kitchen table. (That was her own present to herself). But every inch of its surface was crammed with serving dishes and the abundance of those choices was the essence of a holiday – all the treats we never got during the week. As the bowls emptied and the bones of the turkey were made plain, we forgave her the calendars.

Truthfully, my taste memory of my mother’s earliest turkeys has faded through time. I suspect that she seasoned them the same way she did chicken, with Lawry’s Seasoned Salt and garlic powder, what I like to call the kitchen crack of 1957. (Don’t knock it til you’ve tried it).

But in later years, she adopted the recipe of our beloved hairdresser, David, a Brazilian who loved to cook. His version became our gold standard, though here’s the thing: his idea of brining was to marinate the turkey in red wine and dried spices for 24 hours. This can discolor the breast meat and when my mom complained, he told her to just use white wine. Certainly not! Once something worked, she was loathe to change it, and 30 years later, here we are. She suffers from stroke-related dementia and can no longer cook, so I never even consider changing the dishes that are her legacy. There are worse things than a few pieces of wine-stained breast meat that are actually juicy.

Once I was in college, there were a number of years when my mom threw a Hanukkah party. What makes me laugh now is that it started at 8:00, which meant after all her suburban guests, who had children at home, had already eaten dinner. She made a hundred or more latkes (using her blender) and they were just as great as the originals. She had all sorts of accompaniments – sour cream and applesauce of course, along with crudités, smoked salmon, a vast cheese display anchored by Jarlsberg, green and black olives and Triscuits, rugelach, chocolate-covered marble cake and fruit. It was laid out on the dining room table (filled with all its extensions) on the heavy white cloth. Urns of coffee and tea were on a side table with a silver bowl of sugar cubes, and matching silver tongs. The bar, which my friends and I supervised, was of little interest to the guests who were full of dinner but still intent on grabbing latkes on their way to bed. We got most of the booze for ourselves.

I remember how festive the house looked with its lights blazing. The guests moved from room to room amidst the flowers my mother had arranged on every surface, and the swell of their excited voices, almost none fueled by drink, rose higher and higher. Because it was my mom’s sense of bounty, her generosity, that fueled the night. A table covered with choices. 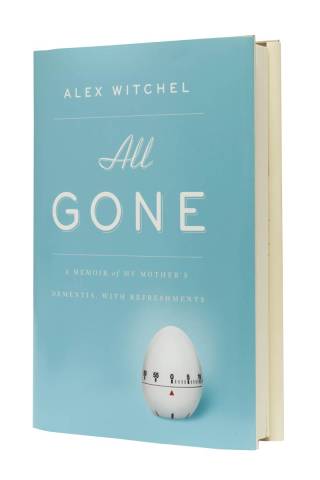 Last-Night-of-Hanukkah Roast Turkey
One of many passages underlined in my copy of All Gone: “The key to home cooking is knowing a good thing when you see it and having the sense to stick with it…I’m all for adventure, but home is about continuity. Some things should never change.”  —Jenny

One day ahead, rinse and dry the turkey, removing giblets and liver. Generously sprinkle all the seasonings inside and out, rubbing them into the skin. Place the turkey in a double layer of plastic trash bags and add the wine. Close the bags securely with rubber bands and place in the refrigerator. Let marinate for 24 hours, turning periodically.

Preheat oven to 400°F. Slice the 2 medium onions into rings and scatter them in a large roasting pan. Transfer the bird from the double bag to the pan, adding about half the marinade. Cut the large onion and stuff it into the turkey cavity.

Cover the pan with foil and roast for 30 minutes. Baste, then add one cup of water and cover again. Reduce temperature to 350°F and roast for another 2 hours, basting occasionally.

Remove the foil and roast until done, basting frequently and adding additional water to pan as needed; legs should move easily and skin should be brown, and a thermometer inserted into the deepest part of the thigh should register 175°F. (Depending on your oven and the size of the bird, this might require 30 to 90 minutes additional roasting time.)

so sweet. i’m gonna pick this book up. she’s so right…you should never mess with a good thing when it comes from home. perhaps that’s why i still make that campbell’s soup recipe for chicken and rice casserole. it was the only thing my mother ever “made” for dinner that wasn’t a TV dinner. that and her beef “stew” which was a can of veg-all with ground beef.

I am sure this was not what was intended, but the expressions “gyp” and “gypped” are potentially offensive. The terms are derived from the word gypsy, which is a pejorative slang term for the Roma people.

Looks like a book to read. I also agree with the idea that once you find what works you should stick with it. Too often I make something worth keeping and forget to make note of it…that is one reason I decided to start a blog.

My mother is an excellent cook – the things that stick out for me were the CLUNKERS. She once put a can of french cut green beans in PERFECTLY GOOD Kraft Mac n Cheese….it tasted metallic and was NEVER repeated again. 😉

This is so, so good. Thank you for sharing the memory and giving me a new book to be excited about. Happy Hanukkah!

I will not pick up a copy of her book although it is probably beautifully written. After going through Alzheimer’s and dementia with both parents, I would sob non-stop.

My mother was one of the world’s worst cooks – although she won a ‘Best in the West’ awards from Sunset Magazine for her Whole Wheat Nut Rolls that were a staple of every holiday meal. Half the family loves them, half gag at the thought of them, but Mum never succeeded in making them without charring the bottoms and leaving the inside doughy. Okay – so I am in the ‘gag’ half.

My grandmother was, however, legendary for pies, cinnamon rolls and biscuits. I inherited that skill at her elbow and now am the designated cook for those items. Family memories – food and otherwise – are what make the holidays sing. God bless all the good and bad cooks that went before us!

Just a followup to Julia’s comment about gyp: My 8th grader came home this week reporting on his language arts lesson about ethnic slurs now (or once) converted to common usage. His examples were “to gyp someone” and “to jew someone down.” My son asked his dad whether he’d ever heard “to jew” and was shocked when the answer was yes, “Dad, didn’t they know you were Jewish?” My husband replied that they probably did but at that moment were just using a word without thinking about the origin. It struck me then (and once again through Julia’s thoughtful reminder) that though “to jew” has declined, “to gyp” is still going strong and yet must still be every bit as offensive to the group that it names.

Maryellen & Julia – Thank you for your comments. Neither Alex nor I had ever heard that the word “gyp” could be interpreted as offensive. To get to the bottom of it, Alex asked her copy chief “guru” if she had any thoughts. Here is what she said:

“Funny, I don’t think I’ve ever come across this issue in all my years at the magazine. The dictionary says ‘gyp’ is ‘informal,’ and ‘probably’ from ‘Gypsy,’ where as ‘Jew’ is ‘slang’ (a higher degree of offense), and its derivation in unambiguous.”

That being said, we have no interest in offending anyone, so Alex edited the word out of the piece.

Thanks for writing.
Jenny