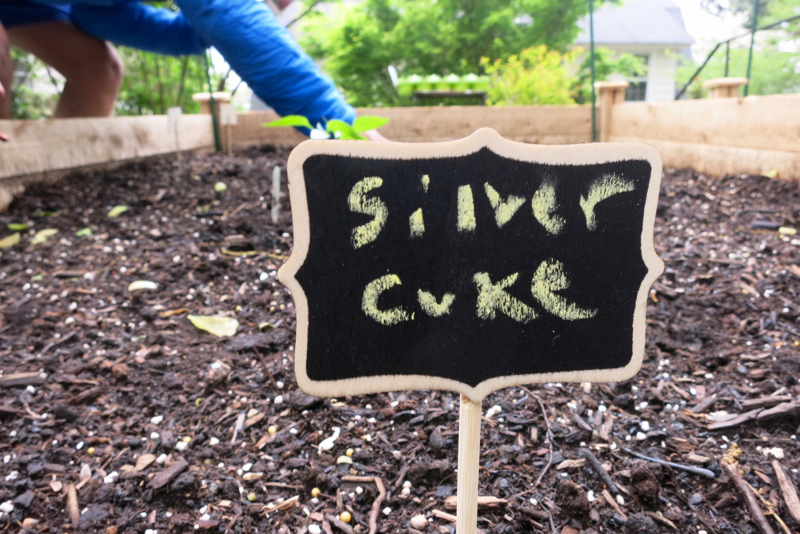 For my birthday last month, I asked for two things: A Shake Shack picnic dinner at our local Hudson River waterfront park — a success by all accounts — and a family vegetable garden. By “vegetable garden” I did not mean one-clicking a few raised bed kits on Amazon and calling it a day. I meant that I wanted everyone in the house involved. I wanted help building the beds, hauling the soil, researching what to plant, buying seeds, planting those seeds, weeding, monitoring, watering, and whatever else is required that I know my impatient, non-detail-oriented self would not be likely to stick with if I had to do it on my own. If one of the hallmarks of a good leader is knowing your limitations, I am ready to run for national office.

At this point in my suburban tenure — going on one and a half decades — you might be wondering why it took us so long. For most city-to-suburb transplants, setting up the backyard garden is way up there on the priority list. It was for us, for sure. The first summer we were in our house, Andy dutifully planted rows of chard and lettuces, only to watch them get stunted by the elements and eaten by a ravenous deer community our deluded city selves had once found so charming. There was also the issue of sunshine: We didn’t have any. Well, we had some, but the only bright spot where a garden might have had a chance happened to be right where the very heavy slide and swingset sat, and even still, we weren’t confident enough to move things around. That was thirteen years ago. Our kids slid down the slide approximately one million times. We discovered youth soccer. We wrote and edited a bunch of books. We forgot about the garden.

Until this past winter, when a few trees had to come down, a few more had to be trimmed (read: sunshine spilled forth) and the swingset…the swingset! Once the source of so much happiness, so much loud, neighbor-offending laughter, sat abandoned and cobwebby; the slide cracked on the side; the rusty chain-linked swings reminders of little bodies pumping their legs to go higher, and little voices begging for underdogs from their parents. Whoo boy. It killed me looking at that thing, I’m not going to lie. On the day it was dismantled, all those backyard memories loaded into the back of a 4×4, I made sure I was working in the city, far far away. 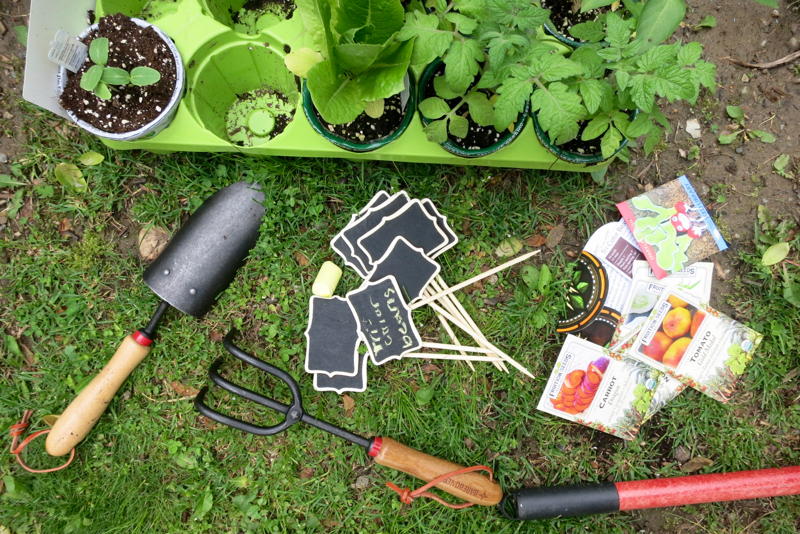 See where I’m going with this? I had no choice but to revisit that garden, and revisit it big, dragging everyone in the house with me, teenager obligations be damned. There was a brief period when I flirted with backyard chickens, but only brief. Instead, on my birthday morning, I opened a beribboned box of heritage seeds procured from nearby Stone Barns farm store and a gardening tool starter kit. I know you won’t believe me, but I didn’t even own a trowel. 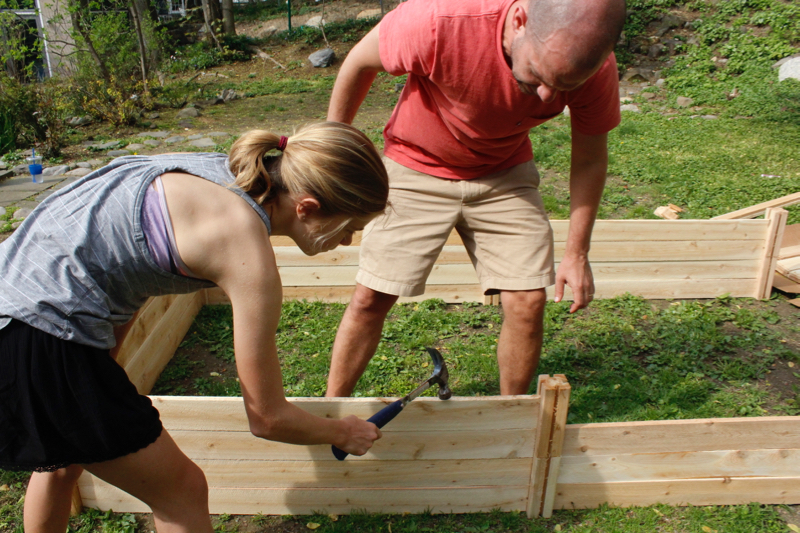 Later that day, Andy, Abby, and I spent a few hours putting together the two cedar raised beds, then we all went to Home Depot to find a few more things to plant not from seed. Our Uncle Mike, a master gardener and one-stop source for all my dumb questions, gave me a quick tutorial on soil, soaker hoses, hose splitters and weed blockers; I hired someone to haul sixty bags (!!!) of topsoil and compost up the thirty-three steps to the second level of our backyard which, like much of our neighborhood, is built into a hill… 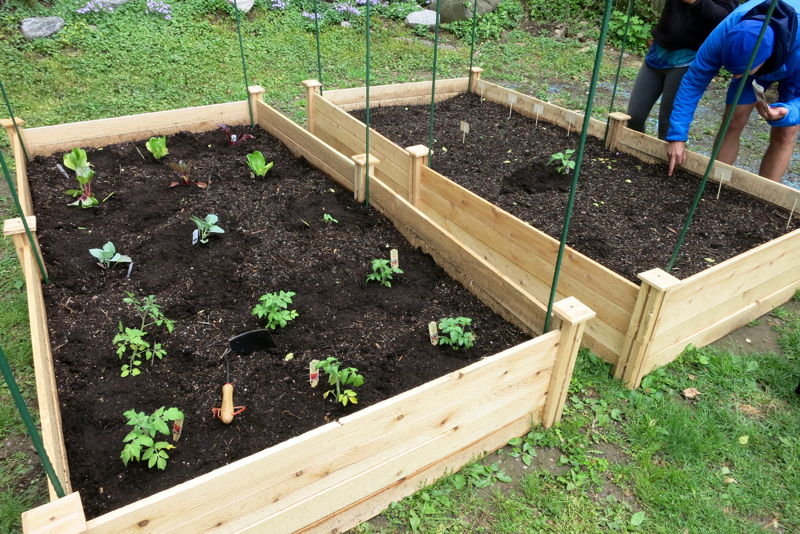 …We did a little improvising on netting and doorways to keep out the critters…and we were off. The left bed is all vegetables started from plants, the right bed from seeds. Except for that big yellow pepper sprout in the middle, which we didn’t have room for in the left bed. Phoebe did all the seed planting and is hard at work coming up with names for each bed (leading contender: Calvin and Hobbes) because we are unable to introduce anything to our orbit without naming it. (Our last four cars: Moozer, Rocky, Pepper, Percy…short for Perseus.) Eventually we will let the girls paint the names on the side wall. 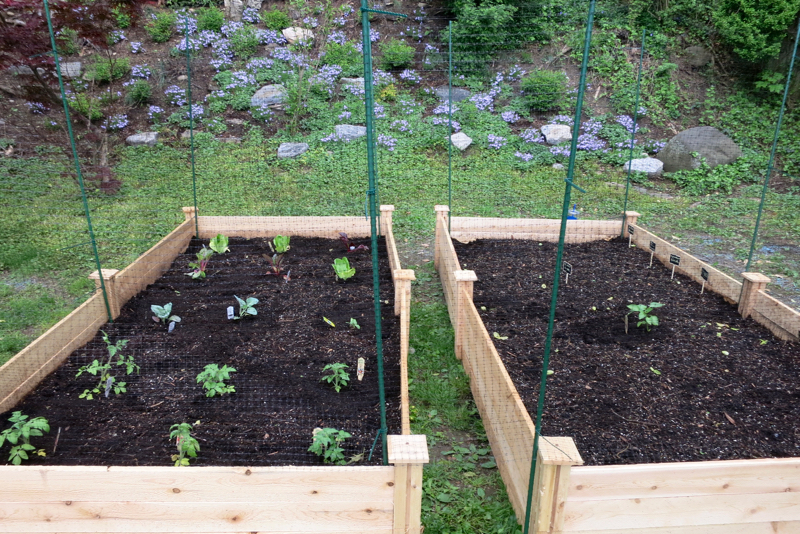 So far so good. It’s been two-and-a-half weeks but the beans and sparkler radishes are winning the race to germinate while only one of my gem lettuces have collapsed and disappeared on me. I fully expect to fail way more than that, by the way. I know that’s part of the “fun,” experimenting and figuring out what works and what doesn’t. But to be honest, I don’t really care. I’m just so grateful to have that corner of the backyard alive again, growing and thriving just the way it should be. 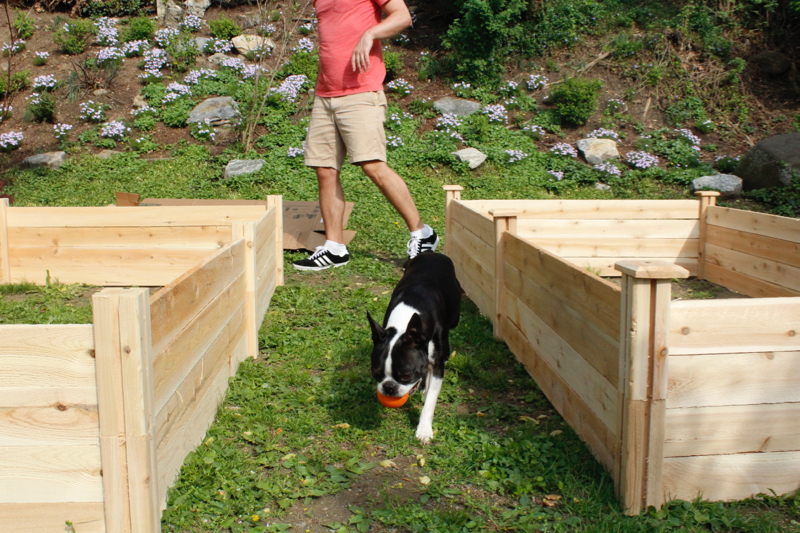 Iris is, of course, also expected to contribute. Follow our progress, whatever there is of it, on instagram. 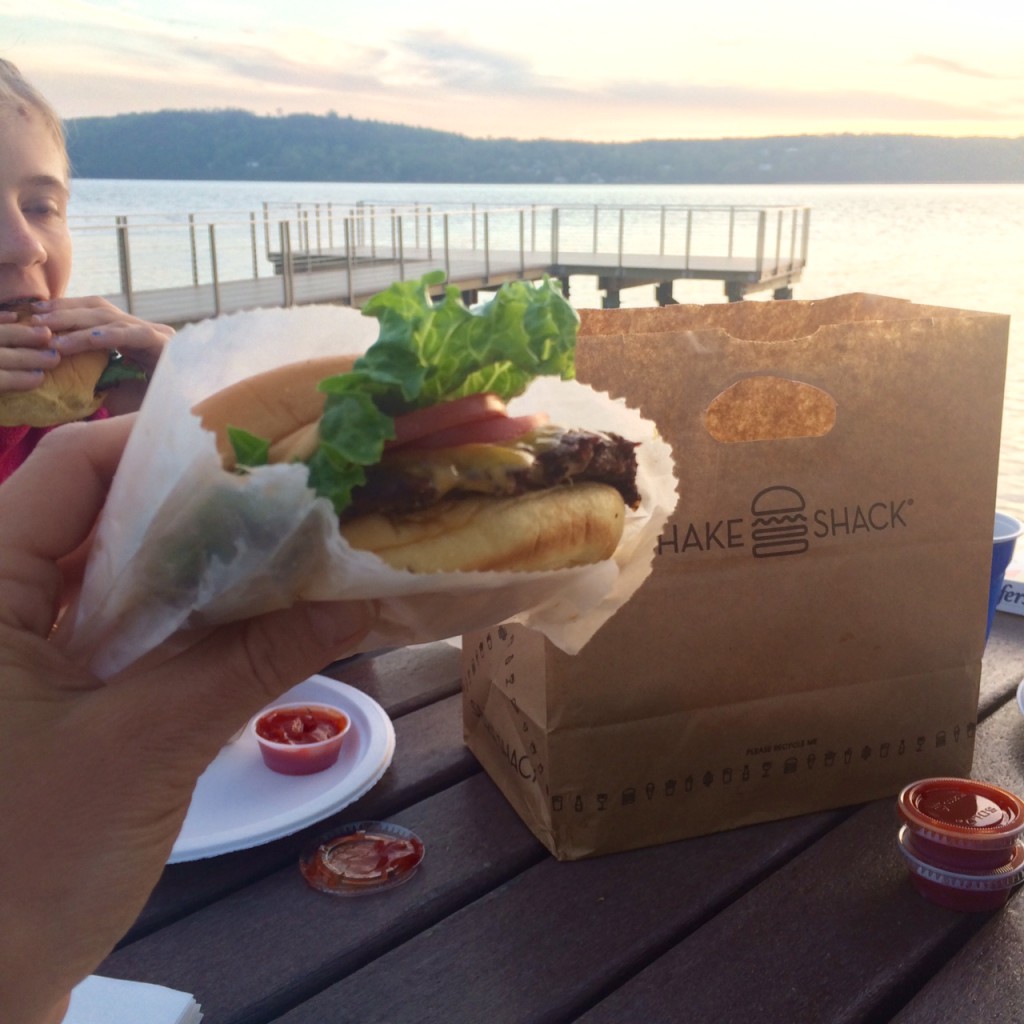 I need details about the fencing! We just installed some raised beds this weekend and need to keep the deer and bunnies at bay. How did you guys do it? Thanks, Jenny!

What kind of tomatoes did you plant? I’d love some suggestions for the best flavor fresh off the vine!

We planted a bunch, from seed we planted Gold Medals and Dwarfs; from starter plants: sweet million, husky cherry reds. But I have no idea if any of them will work out, so no guarantees.

Can you share some details on the bed frames? Were those pre-cut kits or did you build them from scratch?

pre-cut kits. these are the ones we bought, but the square ones I linked to in the post were cheaper.
https://www.amazon.com/gp/product/B00NP9O2UC/ref=oh_aui_search_detailpage?ie=UTF8&psc=1

Congratulations on your new garden! It’s so satisfying and (and also humbling) to grow your own food. Also, kudos on the decision to get some starter plants. Starting a new garden entirely from seed is BRUTAL. You have to experience some success to want to keep going. I can’t wait to see where this garden takes you!

Happy Birthday! Have fun with your garden!

Awesome I love gardening, When I was a child I love to plant trees in my school and Home area, I just got remember my childhood.