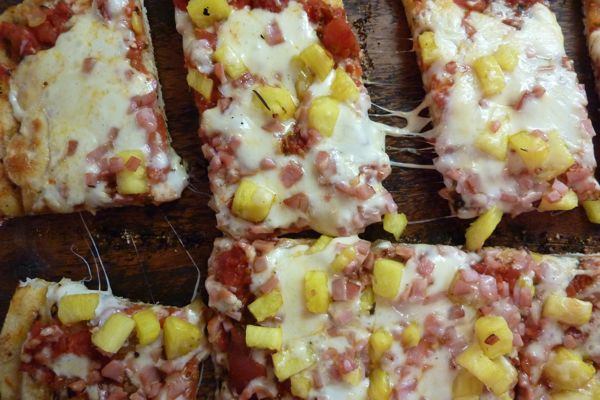 I once read an Q&A with Daniel Handler (aka Lemony Snicket) where the interviewer asked something to the effect of “What’s your secret? How do you know how to relate to kids so well?” This was a while ago – probably 2006ish – so I may not remember his answer word for word, but I remember the gist of it. He said he had just come from the grocery store where he was bored in line at the register so he started making gum packages talk to each other while a five-year-old standing in line in front of him looked on – utterly captivated. “Kids love it when they are in on something that doesn’t seem quite right,” Handler said in the interview. “They love the promise of the unexpected.”

I was thinking of this the other night when Andy and I decided to make Hawaiian Pizzas for the girls. Is Lemony Snicket’s theory the reason why they didn’t instantly turn up their nose at the idea of ham and pineapple on their beloved cheese pizza? Was it that ham and pineapple is an unexpected combination (and kinda wacky if you really think about it) whereas, say, mushroom and onion is just too straightforwardly gross for them to handle? Is Lemony Snicket’s theory why iCarly’s silly spaghetti tacos took the world by storm a few months ago? Is it why Abby, who won’t touch an avocado, seems so intrigued by those cooked grasshoppers that her friend Ellie ate in Mexico? Why she shoveled David Chang’s Rice Krispie-flecked brussels sprouts in her mouth like popcorn? I’m willing to believe it, especially if it means we might have luck taking the kids to Momofuku.

PS: By the way, how excited are we about Lemony Snicket’s next series, which, if you are to believe Google, is due out one of these days…

PPS: If you have a sec, head over to the always hilarious relationship blog Spousonomics today — I guest-posted about family dinner incentives.

Preheat oven to 500°F. Using your fingers stretch and push out one ball of pizza dough (homemade or storebought) on an olive-oiled cookie sheet. Top with pizza sauce (homemade or storebought), 1 ball of fresh mozzarella (in thin slices), 4 slices prosciutto or Canadian bacon (minced finely as shown) and about 2 cups pineapple chunks. Brush the exposed crust with a little more olive oil. Bake for 20-25 minutes until cheese is bubbly and crust looks golden and crisp.

I just wanted to say how much I have been enjoying your blog. I love that it is not just about food, but about the story too.

And I have the Slaw and chicken sandwiches saved in my recipe collection to try as soon as we actually get some warm weather.

thanks inthefastlane! let me know how the chicken sandwiches turn out!

Probably is! & That pizza looks good.

Daniel (aka Lemony) is a family friend of ours and he also graduated from my son’s elementary school, we love the guy around here!!! But sadly, I do not love the pineapple & ham combination. I have a strict no sweets-with-meats rule, but my husband would just love, love, love this recipe. Maybe I’ll have the ingredients ready for him on a night I won’t be home.

Amanda! Get OUT of here! Will you please ask DH to disclose the title of the next series right here on DALS? Tell him I will cook him some pork ragu.

Friday night pizza has returned to our house with no-knead bread dough stored in the fridge but sadly, neither the 5-year-old (plain cheese or pepperoni) nor the husband (sausage or pepperoni with a few mushrooms) is very adventurous about toppings. So we make individual pizzas instead. With warm weather on the horizon I plan to experiment with piadines for myself…daughter likes caesar salad, perhaps this will get her to try something new.

*a* has been obsessed with “warm” pineapple lately. I’ll have to try this. I’m begging you to come like up some of your awesome recipes to my recipe contest/linky, PLEASE!
http://www.bigklittlea.com/2011/05/concours-dcuisine-may-edition.html
~K

This looks delicious! Just had some grilled pineapple last night and this might be perfect for this evening. Thanks for sharing!