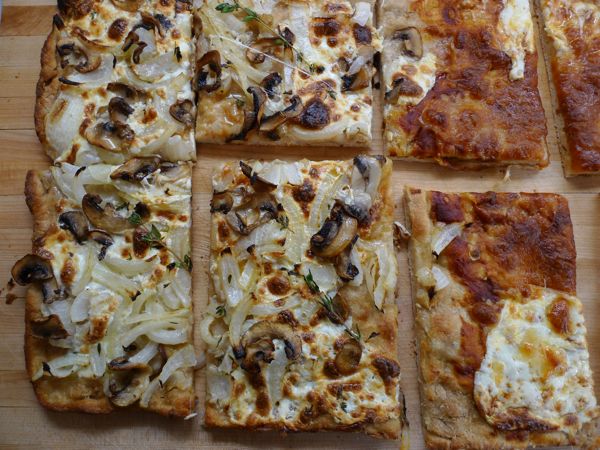 Careful readers may have picked up in yesterday’s post that we have decided to cut back on meat for at least the first two weeks of January in our house. (I say “at least” because secretly I really want to do it for the whole month, but to the girls, that’s like saying to them that they won’t eat a burger for 100 years.) It wasn’t that this holiday season was so much more indulgent than any others — though there was that party with the giant pig’s leg that might as well still have had the hoof on it —  it’s just that limiting meat is sometimes the easiest way for me to feel healthy and inspired about cooking again. I know this sounds strange, but when I leave meat out of the equation, it forces me flex other culinary muscles a bit more. I have to work a little harder to make things taste good and usually I end up discovering some random ingredient like, say, tamarind paste that I can’t believe I’ve lived almost four decades without. (Also, invariably, I end up eating too much coconut and avocado.)

As always, there are exceptions to our rules. We will eat fish. And if we are served meat at someone’s house, we would never for one second breathe word of our challenge to a single soul present. Oh, and there’s the lunch packing. As we all know, this endeavor is brutal enough already without worrying about restrictions, so we’re green-lighting the turkey sandwiches. So far, so good. As mentioned yesterday, we launched the year with Bon App’s cover recipe (replacing the chicken with shrimp); then Night Two we went with this basic mushroom and onion pizza. I experimented a bit with the whole wheat flour in our trusty Jim Lahey crust, and we couldn’t believe how good it was. As usual, the girls drew a line down the center of the dough with a knife and chose to adorn their side with marinara and mozz. Which was just fine with us. 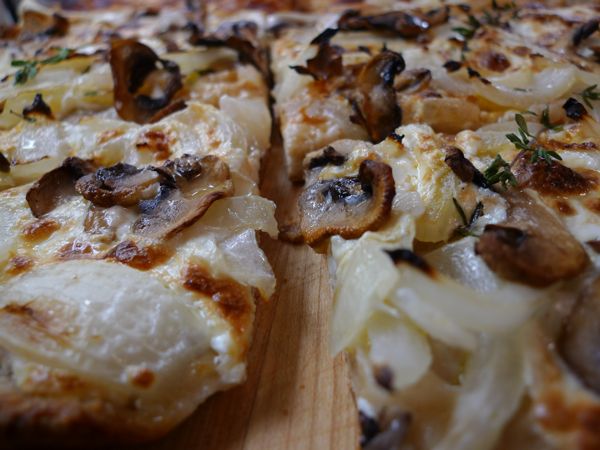 In a medium bowl, stir together the flours, yeast, salt, and sugar. Add the water and, using a wooden spoon or your hand, mix until blended, at least 30 seconds. The dough will be stiff, not wet and sticky. Cover the bowl and let sit at room temperature until the dough has more than doubled in volume, about 2 hours.

Preheat oven to 500°F. Smush the pizza dough into a ball and drop it on the center of an oiled rimmed baking sheet. Using your fingers, press out and flatten the dough so it spreads out to all four corners. This always takes longer than I think and makes my fingertips ache a bit, so I usually let the kids help. (If you are doing split-personality pizzas, draw a line with a knife down the middle of the pizza to divide the “kid” side from the “grown-up” side. Cover the kid side with marinara or pizza sauce and a few slices of fresh mozzarella.)

Place mozzarella slices on the grown-up side so it covers as much of the dough as possible. Sprinkle with onions, mushrooms, and thyme leaves. Brush any exposed dough (specifically the edges) with extra olive oil. Bake for 15 minutes until cheese is bubbly and golden.

We served with an arugula salad tossed with freshly grated Parm and basic vinaigrette.

Dang that’s a nice photo. On the meatless/semi-meatless avenue, we’re souping it…although I do have five pounds of short ribs begging to be braised. Got The Essential New York Times Cookbook for Xmas and it’s loaded with some great sounding soups.

I’m so impressed you noticed the photo MPT! I was not shooting with my Regular Panasonic Lumix this time. It was a special kind I think called the Super Duper Lumix which I borrowed from a very nice friend! Happy Souping!

My partner and I talked about maintaining a no-meat diet for some days of the week but I completely forgot about while listing some of my resolutions for the new year. Thank goodness you reminded me! Definitely going for vegan pizza.

Nice pizza, Jenny! It looks so deliciously indulgent, while still being healthy. We’re opting out of meat a few times a week as well and I’m secretly loving it, although my three men are a little less so. The trick for me is to make meals so satisfying they don’t notice the missing meat.

We did no meat between Thanksgiving and Christmas. While I fully admit to a few Chic-Fil-A “timeouts,” I really enjoyed it, and I don’t think we’ll return to a meat heavy diet for a while. You are right; restricting meat does lead to more kitchen creativity! Your pizza looks amazing, and I will be looking forward to reading in the new few weeks! 🙂

I like gourmet pizza, but there is nothing better than good red sauce and delicious mozzerella.

We set a goal to eat less meat this year. I have been using Mark Bittman’s Food Matters cookbook and have found some real winners. His idea is to include meat for flavor or an accent (he uses 8oz for 4 servings). It is working out well so far and the critics, I mean my kids haven’t complained so far!

This looks great. I have a questions re pizza crust or the Trader Joe kind. I used their reg pizza crust the other day and it took the center FOREVER to cook. Should I pre cook it? Or maybe my oven is not doing well. I might get that checked. I followd the package instructions but then had to cook it 20 min longer to get teh center cooked. Any ideas out there. Maybe I should just try making my own with this. Pizza crust and I don’t do well together so I have always avoided that part.

i totally agree with you about ‘flexing your culinary muscles.’ in any craft when you start to rely on something too much it’s great to take it away and see what new comes forth.

Hey, do you really do most of your pics with the Panasonic Lumix? I have one and my food pics are never as good … I really should dig out the manual and learn how to use the camera properly.

On another note, we’re right there with you when it comes to the meatless January … my body just screams “vegetables!” after the excesses of late December.

I love Lahey’s pizza dough! So much that in the last two weeks I’ve used it for zucchini pizza, butternut pizza, and on New Year’s Eve, everything pizza. Plus I blogged about the mushroom one a while back. Seriously, this recipe ROCKS.

Leah – Yes, all my pics are done with my beloved Panasonic Lumix, DMC-ZS3, the one with the Leica lens. It actually has a food setting in the Scan function…have you found that on yours?

What do I cover the dough with? A paper towel? Saran wrap the bowl?

Made split personality pizza last night and the gorditas from the cookbook tonight. The gorditas rocked!! My 5 year old Mexican food lover – well, he loved it. LOL I used vegetarian refried beans but lied and told the kids it was meat till they ate it. Picky eater cringed when told the truth. But open minded child could have cared less. Just had to share!!!

YUMMY! We just made this for dinner and it was AMAZING. I used half the crust on a pizza pan, and saved the rest of the dough for another day. Can’t wait for our next pizza – we’ll have to try some of your other topping suggestions. Thanks!