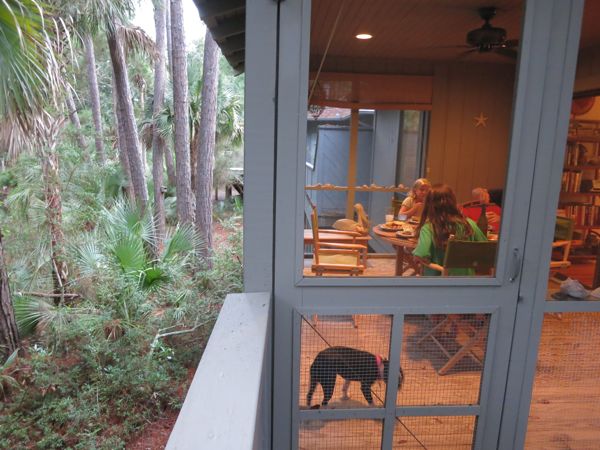 I can’t promise you this will be a very usable guide to exciting eating. As you know, on vacation, you can toast a pop tart for dinner and it will make you as happy as a four-course meal at Cafe Boulud. (In fact, maybe we’ll try that tonight.) But, as you can imagine, we are getting seriously into our South Carolina vacation dining, doing our best to adhere to the 50 Rules, outlined so dutifully last week so we don’t lose total control. Herewith our top six dinner moments this side of the Mason-Dixon line… 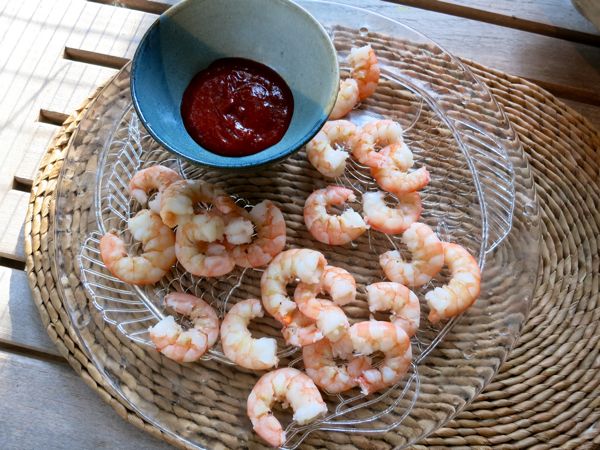 1. Shrimp Cocktail. I once read that if you’re not going to eat shrimp right off the boat in Southeastern US, you might as well always buy it in the freezer aisle — there’s pretty much no such thing as fresh, flavorful shrimp outside of this region. I think that’s why whenever we are down here, we eat shrimp like we’re never going to eat shrimp again. The run-up so far: Shrimp cocktail before dinner as often as possible (chilled with cocktail sauce, natch), grilled shrimp in salads at lunch; shrimp salad rolls for dinner. 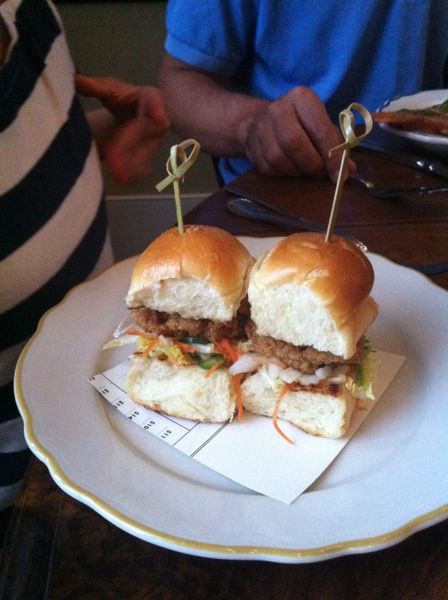 2. Oyster Sliders at The Ordinary. We’ve gone out to dinner a few nice places, but so far the winner has been The Ordinary — perhaps a tip-off was the fact that Bon Appetit nominated it for one of the country’s 50 best new restaurants this year. Or perhaps it was the oyster sliders with the crazy coconut action that Abby ordered and which put the rest of our meal to shame. And that’s saying something because the rest of the meal — lobster rolls, pickled shrimp, John Dory schnitzel — was pretty damn tasty. 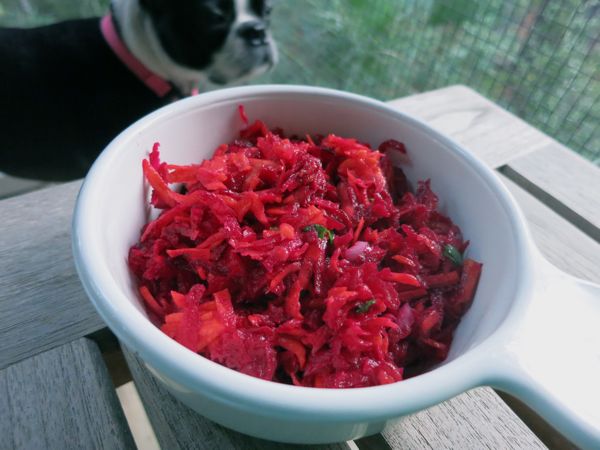 3. Beet & Carrot Slaw Our CSA pick-up was the day before driving from New York to South Carolina, so what were we going to do, give our neighbor that week’s share? I don’t think so. Not when, among other things, heirloom tomatoes and cylindra beets were in the box. We packed all our produce in a cooler and tended to the bundle like it was a third child. The love and care paid off because on our first night cooking we made some flounder and, not wanting to turn on the oven (Rule 45!), I shredded those beets on a box grater with some carrots, tossed in rice wine vinegar, olive oil, salt, pepper, cilantro and mint. (Full disclosure: There was no mint, but there should’ve been.) 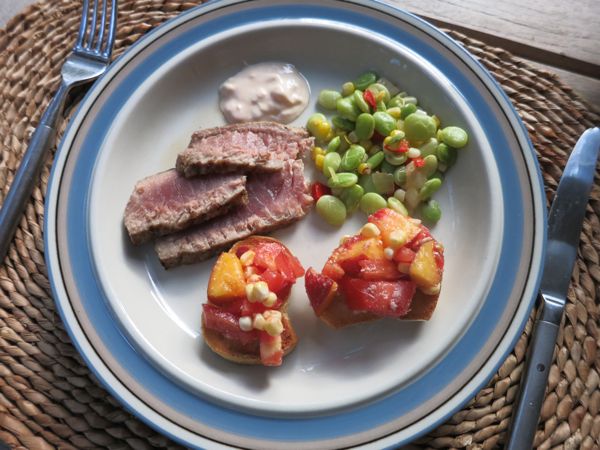 4. Phoebe’s Crostini You’re looking at grilled tuna (that Andy had spackled in mayo before throwing on the Weber) a very JV succotash made with butter beans, corn, red peppers, onion, sauteed in a little bacon fat (apologies to real southerners) and Phoebe’s crostini. At camp, Phoebe learned that if you toss chopped fresh tomatoes, fresh peaches, corn kernels, a drizzle of balsamic and some Parm, and put the whole thing on baguette toasts, then very delicious things ensue. “It’s like summer in a bowl,” she announced when she put together the topping. I’ll take it! 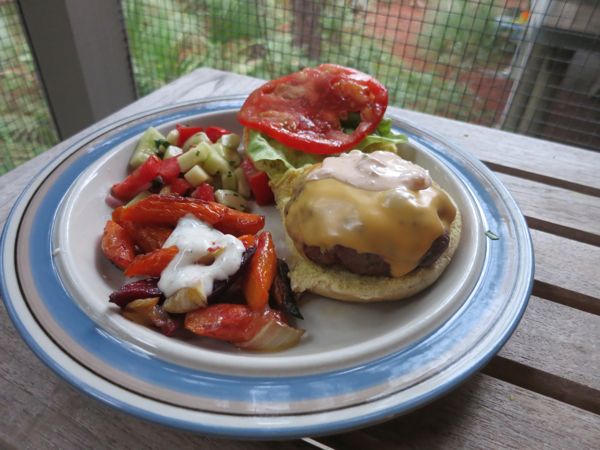 4. Roast Carrots with Garam-Masala Yogurt Sauce. OK, so fine, I confess: we turned on the oven once. Or twice. But the cause was a noble one — carrots, cut on the bias, tossed with a little chopped onion, olive oil, salt, and pepper, and roasted at 425°F for about 30 minutes (keep an eye on them). While they roasted, I whisked together about 3/4 cup plain yogurt with a teaspoon garam masala, lime juice, olive oil, chopped cilantro and mint. I’m not going to go so far to say it was the best thing on the plate — that’s an impossible honor when a grilled burger with special sauce is in the mix — but it was a clear leader in the side dish department this summer. 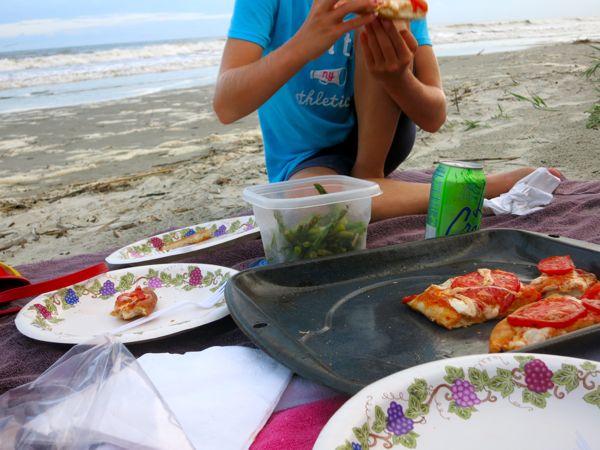 6. Beach Picnic The homemade pizza with fresh tomatoes was pretty good. So was the asparagus that Andy quickly sauteed in olive oil, salt, and pepper during the 30 minute stretch that the girls were totally, absolutely, relentlessly begging for a beach picnic. You promised! It’s so easy! I’ll help pack everything! Come on it’s vacation! Be fun! What parents know but kids don’t yet is that beach picnics are one of those things that always sound really fun, but are actually kind of a nightmare. Especially if you don’t have any of the right gear (see baking pan cum nonbreakable tray above) and especially if you try to take photos showing how ideal the night is (full moon, clear sky, silky calm ocean, etc), then get sand in your fancy camera making things a thousand times more stressful. So why is this even on my highlight reel? Because after dinner was over, we all jumped in the ocean. And there’s very little that beats a post-dinner sunset swim.

Looks great! Nothing like a South Carolina beach vacation. Everything tastes better!

Hope you all had a wonderful trip! We enjoyed SC in June – Isle of Palms area.

I laughed about your beach picnic, we’ve tried it a few times and failed but hey, you can’t beat the view…

swimming makes you so hungry, great idea to have the picnic right there for pre or post swim!
p.s. abby’s crostini sound delicious!

Wow! A camp where you learn to make that crostini sounds fantastic. A much better life-skill than creating lanyards.

Thanks for blogging on your vacation. That’s going above and beyond!

Yes to everything except the beach picnic. Food+sand+kids=Recipe for disaster. Learned this the hard way.

Okay, yum, and if you want to avoid turning on the oven, wrap the carrots in foil and throw the packet on the grill. We grill all kinds of vegetables that way (cabbage! radishes!) and they unfailingly turn out great.

It’s wonderful that your family is having such a great time! So few times do we get to have family vacations once they have reached a certain age.

It sounds like you guys have been eating really well on your vacation. Enjoy your family time at the beach!

Love the post. I feel like I’m on vacation with you! Tell Phoebe I’m dying to try the crostini recipe. Ditto the carrot beet slaw.

I love the 50 rules but I love your honesty most…every time I put together a beach picnic, sand ended up in something. That truly is one event where the imagination is more romantic than the reality.