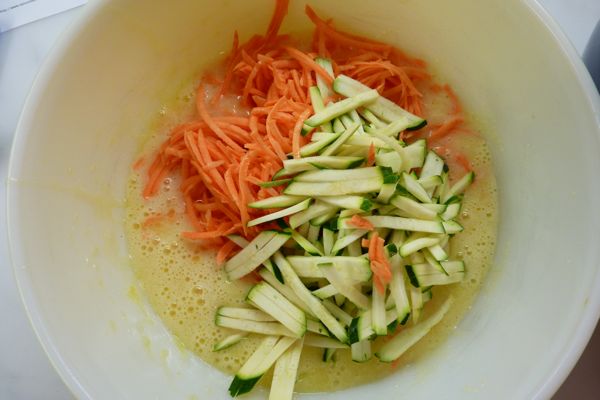 My 3-year-old nephew Nathan is not a big fan of vegetables. Or the idea of eating in general. I spent a few days and many meals with him on vacation last month and watched as his dad — my brother — agonized over each crumb that did and didn’t go down the hatch. Annie’s Mac & Cheese is pretty much his only ace-in-the-hole option — that is, the only food my brother can be sure Nathan will eat when you put it in front of him. “Oh, and cake, too,” he said laughing. But I got the distinct feeling that he found it the opposite of funny.

For the entire vacation I had to force myself not to say what every single family member, friend, and physician said to Andy and me when Abby went on her Great Food Strike of 2004:  She’ll eat when she’s hungry! Why are you making yourself so crazy? Man did that prescription make me crazy. While of course there is something to the idea of not giving the kid so much power in the struggle — i.e. by not pushing, not hovering, not worrying — try putting this in to actual practice when your kid eats one raisin over the course of an entire week (February 9-15, 2004).

In spite of my own grueling experience, it didn’t stop me from thinking that I could solve the problem if my brother was out of the house and out of the equation. I was determined to get Nathan to eat my golden crispy homemade chicken fingers (and therefore solve all his problems) in the time it would take my brother to play nine holes. So I made a plate of Nathan’s Mac & Cheese and a plate of chicken fingers then sat down with him to eat lunch on the porch.

“What’s that?” he asked with the same inflection he used earlier that week when he saw an albino alligator in the aquarium.

“Chicken fingers,” I told him. “But this is my lunch, not yours. You go ahead and eat your pasta.”

He studied “my” lunch carefully…skeptically, then watched me crunch into a piece of chicken and close my eyes with satisfaction. (I can really ham it up if the circumstances call for it.) His reaction? I think just to be absolutely sure that what I had promised him was true, he very gently pushed the plate of chicken as far as he could out of his placemat real estate, then scooped up a spoonful of his own lunch.

So guess what’s on the menu for the next time I see him? Cake. 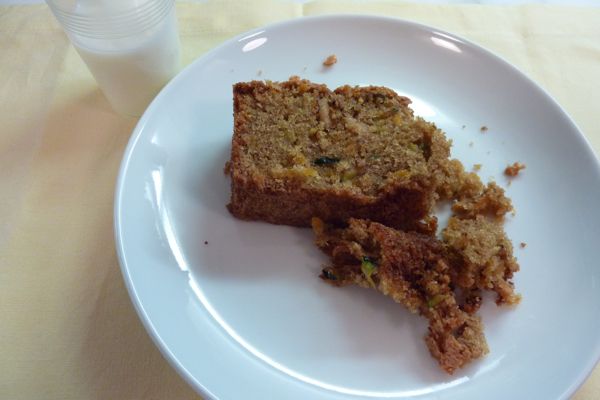 Vegetable Cake
I first found out about this recipe (which originated from Bon Appetit) from a reader who read my Babble posts. I love it because it feels like one slice for dessert gives the kids an official serving of veggies. This version is tweaked — I added whole wheat flour, and mixed up the vegetables. It freezes nicely, too.

Preheat oven to 350°F. Butter a loaf pan. Sift flours, cinnamon, baking soda, and baking powder into a medium bowl. Blend together sugar, oil, eggs and vanilla in another bowl. Mix in zucchini and sweet potato. Add dry ingredients to wet ingredients and stir well. Transfer batter to pan. Bake about 1 hour 20 minutes, until a toothpick inserted in the middle comes out clean. Cool bread in pan on rack 15 minutes before cutting around the edge and removing. Let cool completely if you are freezing.

I can relate completely. My kids are horribly picky and I have so many friends who think a day or two alone with them and they would fix the problem. I would gladly loan them out if that would work. We’ve made progress but not as far or as quickly as I’d like. I will add this bread to the repertoire. I currently make a zucchini/pumpkin bread that we call Zanzibar Cake. Whatever works!

I also have an 8 year old that is very picky, always has been. If he does not like the way it looks he WILL NOT eat it. He does tend to like cinnamon. So I will try this and see how it goes. It would be a great thing if he would eat this. Do you think it could be made into muffins? They would be great for the lunch box.

Even as a former picky eater I have no empathy for those who won’t try new foods.

Regarding this cake, does it taste like carrot cake or is it closer to something I would eat as a child?

I’ve made a similar version into muffins and they were a hit (my kiddo loves muffins, not so excited about veggies). I also doubled the recipe, as it doesn’t take that much longer to shred more veggies. I’ll try this version next time to get in more whole wheat!

Oh, and I don’t think I’ve commented here before. I’ve been reading along for several months and really enjoy it.

I was wondering the same thing as Trish O — would this adapt to muffins? I have two girls who are actually pretty good about eating veggies — but I make snack for our preschool once a month and there are some pretty serious vegetable resisters there. Muffins (esp. mini-muffins) are always eaten, though. I might have to give it a try!

Leah & Trish — I’ve never tried with muffins, but I will this weekend. My guess is that it will be fine…stay tuned!

This sounds exactly like my daughter. She’s been a vegetarian that doesn’t eat vegetables since birth. It is the most frustrating thing ever! We subsisted on Annie’s Mac & Cheese for about 5 years until I finally broke down and refused to buy them. The sight of those boxes makes me want to slit my wrists!

Over the past few months we’ve had some progress – 3 leaves of spinach! 30 peas instead of 6! It’s pathetic — but better than it was.

I’ve never been a fan of the sneaky chef routine but I’m almost to the point where I don’t care.

I too need to be a member of the MWPE (Mother’s With Picky Eaters) support group. I have one child who, when he was 3 would ONLY eat PBJs. That is it. He is still very picky, but one day he will grow out of it. I know this because I used to be just like him.
Thanks for the great post and recipe.

I love this idea! What can I sub in for the sugar without effecting the integrity of the cake? Honey? Agave? Other?

The vegetable cake sounds yummy for adults as well.

Vegetables can have a much more bitter taste to small children than to adults.

Just made this cake with a mixture of shredded sweet potato and carrots. I am planning on serving it tonight but I just snuck a piece (hey, quality control!) and it’s great. I probably could have gotten away with a little less sugar but it tastes great. Next time will try a few subs, less sugar, subing out some oil for applesauce, etc. I remember my grandmother doing a cake like this with just zucchini and adding chocolate chips to it. I feel like that’s a fair addition to make up for the zucchini but would be too sweet with carrots/sweet potato. I’ll probably eat leftovers for breakfast, this would be a great quick bread for a brunch.

I just made this for my 3 1/2 YO twin girls and my 20 MO son; all non-vege and -fruit eaters (*sigh*). I made them muffins instead if a loaf (calling them cupcakes) and the girls helped me make them (motivation for tasting them when done). I followed the recipe but the veges I used were 2 c. zucchini, 1/2 c. carrots, 1/2 sweet potato. I was flabbergasted when all 3 of them, immediately after cooling, gobbled up 2 muffins each. Hope this wasn’t a fluke and they keep eating them. Thanks for sharing this recipe!

It isn’t true that “they will eat when they are hungry”. My college roommate has never eaten a vegetable and she is 65 years old! I intend to “fool” her into eating some with this cake recipe. Glad Torrey mentioned reducing the sugar…something I always try to do.
“Do I win the GetMaineLobster.com feast?”

This looks delicious, but with two cups of sugar and 3/4 cup of oil, please treat it as a snack for your kids and not a vegetable. All that sugar and oil would totally cancel out any nutrition from the vegetables. Don’t kid yourself….NOT heath food people!

I also have a seriously picky 3 year old and one of our staple foods is my “veggie muffins”. They never fail to disappear completely at kid events. It’s quite similar to the above recipe, except for a couple of changes.
1. Puree the vegetables! It’s amazing how moist the muffins or cake turns into and the kids don’t have any clue that veggies are in it. I make mine with a whole can of pumpkin and then add in half a pound of carrots, a sweet potato or two and a couple zucchini.

2. Instead of 2 cups sugar, I use 1/2 cup molasses, 1/2 cup applesauce (reducing the oil) and 1/2 brown sugar. Still tasty, but not super sweet. Plus, it provides a little extra iron from the molasses, and it gives the muffins a richer taste. I also use more flour, so it’s a bigger recipe.

Yum, this is almost exactly a recipe my family has been making for years and it always gets past the non- vegetable eaters. We use shredded zucchini, cut the sugar to 1.5 cups, add a whole tbsp of cinnamon. Makes lovely muffins and has been served many times to adults who refuse to eat vegetables (often later astonished when we tell them). It freezes great and is perfect in summer when there are too many zucchinis.

Just made this last night w/ 2 carrots, a zucchini and a yellow squash. I got two loaves and baked them for an hour. Came out great. The kids and I discussed alternative names – vegetable cake just didn’t appeal to them. We settled on veggie confetti cake since the veggies look like confetti when you cut into the cake!