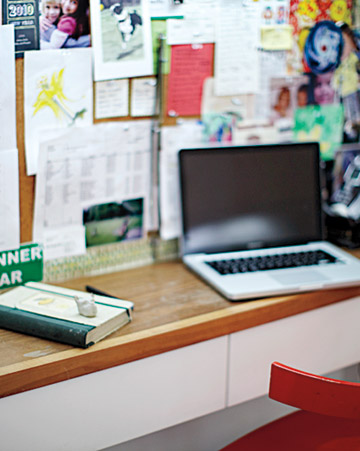 The first week of school was a little out of control. That weird bubble in the kitchen ceiling finally turned into full-blown leak. After five years of having not a single mechanical issue with the Mini, the brake pads decided to give way on the way to drop-off. Iris, our usually bordering-on-bonkers Boston Terrier, was slinking around lethargically for days before ending up in the ER until midnight on Wednesday. (She’s fine.) To say nothing of the general first-week-of-school anxieties from the kids that the whole house ends up absorbing.

When I have weeks like this, I find myself spending increasing amounts of time in front of Command Central, the kitchen desk and bulletin board pictured above where all the family organizing happens, and where I can pretend to have some illusion of control. It’s where I keep the laptop, the class lists, the printed yahoo calendar, the birthday invitations, the soccer schedules, the specials schedules, the afterschool schedules, as well as a random mix of photos and souvenirs from all the action, so that every now and then I can step back and remind myself that all of this chaos adds up to happy chaos. (BTW, tagline on back of the cookbook: Life is not chaotic: It’s rich.)

So even though I can’t control who is in my daughter’s class, I can make sure the class list is accessible for playdate arranging. And even though I probably won’t be able to predict the next time I’ll have to dry-wall an enormous gash in my kitchen ceiling, I know my handyman’s cell phone is always a few steps away, push-pinned to the cork. Right next to the list of take-out numbers for those nights when everything seems to be conspiring against a home-cooked dinner.

A few other details below… 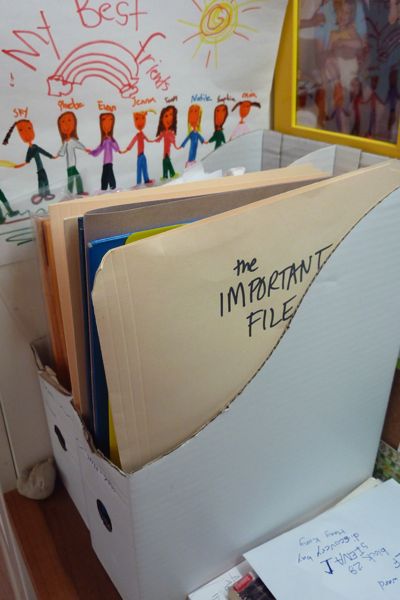 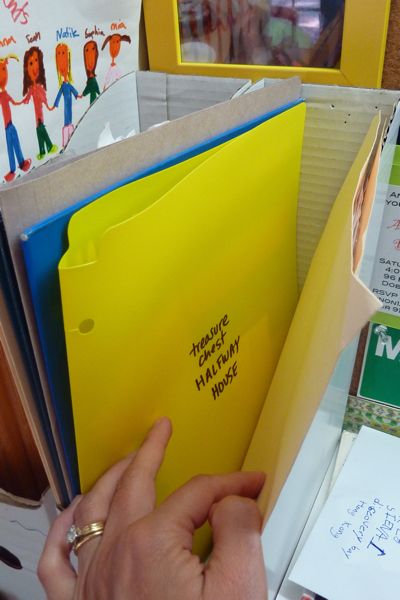 Two Files, Not Fifteen. I used to keep a huge three-ring binder for all school- and extracurricular-related handouts. It had many many dividers and files and tabs, but very little grounding in the way I am capable of organizing. (In my experience, three-hole punching is the task that rarely makes it to the top of the to-do list.) I’ve since decided that I need only two files in the kitchen to survive. The first is “The Important File.” In short this is where all the important things go — permission slips, activity registration forms, book order information, general hand-outs from school that will need to be dealt with. (As opposed to referred to — those papers go on the board.) The second I call my “Halfway House” file. This is, in fact, one part of a slightly larger system, the Treasure Chest System. Like most families, we have a large container in the basement where we keep all the artwork, animal reports, Mother’s and Father’s Day cards, homemade comic books, birthday invitations and everyday treasures that we think will be special enough to retain sentimental value down the road. The problem is, the “chest” is in the basement and I can’t be running downstairs every time an acrostic poem comes back in the homework folder. So I transfer those gems to my Halfway House folder in the kitchen. When that folder fills up, I make a trip to Treasure Chest. It’s not pretty, but it works. 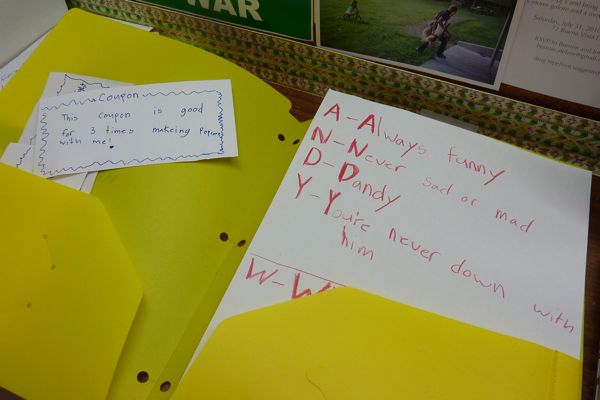 This is the kind of thing that passes the litmus test for the “Halfway House to the Treasure Chest” folder. Do you guys know about acrostic poems? Phoebe made one for Andy (above) and then everyone in the house started writing them for each other. Even Milky and Ralph, the gerbils, got their own. 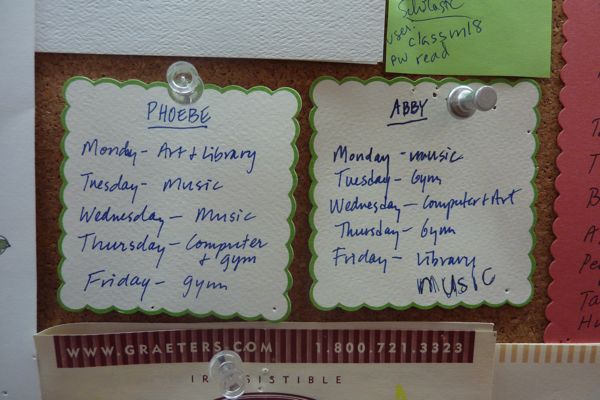 I am not neurologically built to remember which days of the week which girl has to wear sneakers for gym, or something not-so-nice for art. And neither are my daughters, apparently. These little reference cards help us all out. 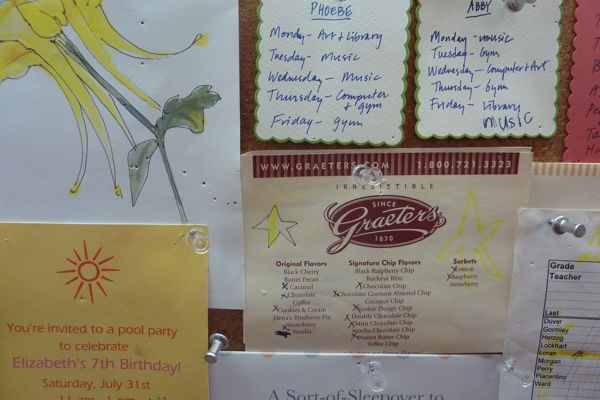 Birthday invitations, class lists, and a gift certificate my friend Rory gave me to the fabulous Graeter’s so I don’t forget to order my six pints of homemade ice cream. (Such a great gift for a family by the way…she gives it to us every year for my birthday.) 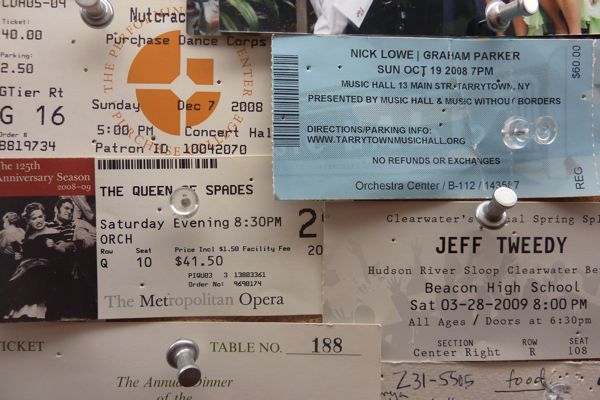 Concert tickets to remind myself that we occasionally participate in the outside world and sometimes even enjoy doing so!

I can so relate to the calmness I feel when I look at my desk, which is our Command Central at home. While I am more of a compulsive list maker and “pile” person. I make lists just about every day – on the train on the way to work and on the couch after the kids go to bed and I refer to them all week long. Nothing says calmness to me than looking at my list – it is a happy place for me.
We are just starting to receive copious amounts of art and I am contemplating using a pizza box to store art by year. Whatever fits in that box is kept, otherwise it has to go into recycling.

ahhh, this makes me feel better. I’m not the only one…
My daughter just started kindergarten & I’m a full-time working single mom (i mean- outside the home. aren’t all mothers working full time, all the time?) and already the first couple weeks of school have brought home so many papers- my ‘command central’ has been… to tape the schedules to the back of the front door! yes. really. it works. (secretly i’m hoping to absorb the PE/Music/Art schedule by osmosis just by seeing it every day. )

as for the ‘art projects’ I keep them in a pile & then ruthlessly go through them before deciding which one to keep for posterity- that pile lives on the end of my kitchen counter. oh well. now my secret is out!

it’s amazing how cleansing a little organization can be. all that stuff that clutters my table, shelves and other household surfaces definitely clutters my mind, too. when i take time to declutter, discard and organize i literally feel like a weight’s been lifted : )

our next kitchen will have an area like this.

is the mini 5 years old? the husband has been wanting one for ages.

I love seeing how other people organize their chaos. I like your systems – I’ve been doing something similar with piles, but I need to graduate to something less horizontal. I’m such a dork – I really truly like organizing.

Your Halfway House cracks me up. I don’t even kids and I had something similar before we moved (the box in the closet was upstairs, so we had a holding area downstairs). I have one shoebox per year.

We moved to a single-level apartment and my husband is trained so well. We went to a game and when we got home, he marched over to my craft table in the office and deposited his ticket.

That is a power nook if I’ve ever seen one.
Tour of your cookbooks would be lovely someday too, if you were so inclined :).

Love command central. Is it separate from the “home office”? or one and the same?

Loving the desk built in! Good to see how others keep it all straight! Can you show us how you organize what is for dinner? I am struggling with how to keep track of all the menu ideas and how to communicate them to the hubs. Notebooks? Digital? Really difficult to keep it all organized -menus, shopping lists and ideas. I just have lists,
piles of index cards and a yellow pad right now!

Love your command central. We just moved from California to Wisconsin (not for a job or family or friends, but for the adventure!)… daughter just started kindergarten and son is now in preschool. Just wanted to comment on Kristina’s question about planning dinner. Every Saturday (this day slips sometimes as I’m not always that motivated or organized), I sit down and plot out the week’s dinner menu. When I’ve figured out what I want to cook, I go through the fridge and make a list of what I need to get at the store, then go shopping. Now, this doesn’t always work out…but as a full-time working mom (outside the house), it’s nice to not spend the day thinking (and obsessing) “what can I cook for dinner that’s not only healthy, but the kids will eat (without complaints)”. It works most weeks, but honestly, I break down and get take-out pizza like everyone else.

I love seeing little details like this. The acrostic poem is fantastic!

I am busy building my command central, so I really relate to this post. I like yours!

Wow! You have a Boston Terrier too! I have one her name is Phoebe! I just adore your blog! I look forward to it!

New to your site. Love it. My systems of organization consistently fail. Yours seems straightforward and destined to succeed. I’m visiting now to get the mud cake recipe for my daughter’s 7th birthday this weekend.
Although I get out far too little as well, I was at that amazing Jeff Tweedy concert tacked to your board. Wasn’t it great?

Love the concert ticket collage…but i hate it these days that most tickets are electronic and so we don’t get the old-school ones to save for posterity like those! most of them are will-call with your name at the door. we’ve been to several this year and i only have 2 tickets to show for it, that would make for a pretty sad bulletin board 😉

I think we are living parallel lives:
http://www.valleyadvocate.com/blogs/home.cfm?aid=12338

I loved this & am now aspiring to my own Command Central.

Just started reading your blog and love it. I work full time with two little girls and can’t keep on top of the paper, art work, etc. My husband complains about once every three months after the paper gets out of control – I need to create a Command Central too!