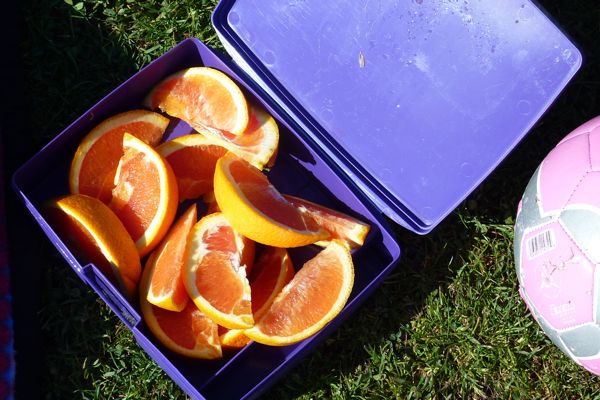 I don’t know what it is – the sudden blast of 90-degree heat or some kind of adult onset allergy or the first signs of a midlife crisis – but I logged some serious time this past weekend trying to recapture my youth. First, I went out and bought a tetherball kit – remember tetherball? – and instead of putting it in the basement and telling myself I’d set it up later, when I had more time, only to watch it gather dust on top of our treadmill for the next ten years, I actually dug a hole, got a bag of cement, and planted all nine feet of that sucker in our backyard. (I then spent much of Sunday afternoon dusting off my skills – skills that I had honed over a thousand summer nights by beating my dad, who I could usually coax outside to play with me after work, only he’d insist on doing it with a gin and tonic in hand.) I watched some Bugs Bunny on Saturday morning, too, which was just like the old days – only I watched it on youtube, with two little human beings who share my genes and my last name, which is most definitely not like the old days.  But the thing that really brought me back were the orange slices I brought to my daughters’ soccer game. When I was a kid, orange slices were the snack of choice after a hard fought game in swampy Virginia heat. No Clif bars, no vitamin water, no “fruit snacks.” When our games were over, we’d shake hands and rush over to the sidelines where one of the parents would put out his cigarette, smooth his mustache, reach down, open a red Igloo cooler, and pull out a huge Ziploc bag full of them. Cold, juicy, and sweet. We’d devour them right there on the field, tossing the skins aside, the juices running down our chins and onto our itchy polyester jerseys. Our hands would be sticky for the rest of the day. Can you tell I remember this fondly? Well, the same scene played out on Sunday, after the Arctic (our girls’ team) played valiantly for the first half but ultimately succumbed to the Blizzard, a crazily good and determined opponent who seemed to get stronger as we wilted in the heat (and picked dandelions). No matter, though. Just watching them eat after the game, mmmmming in pleasure, asking for more after the plate was cleaned, was enough for me. –Andy 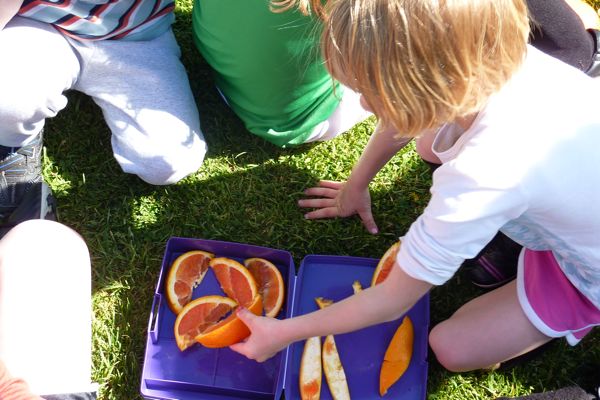 Andy– I also had orange slices after playing in my varsity basketball games in the 50s. Yummy is right.

My face would burn after eating so many orange slices after Reston soccer games. Recently, my daughter needed to bring a snack for a cheerleading event. When I suggested orange slices she looked at me like I was crazy.

Hi there – just found this blog a few days ago and LOVE it!! I’m planning some meals right now based on what you’ve written…..thanks! (And I remember well devouring orange slices after a soccer game)

Thanks for the inspiration.

What a great resource!

Oh, you’re killing me! This is great! I keep trying to recreate my 1970’s childhood with my kids – with so little success, truthfully – but here’s one more really, really good idea!

Jenny, orange slices are a magic part of my childhood too! My dad coached our soccer team for 10 years and at half time of every game we’d have orange slices. If someone forgot on their turn to bring them, a parent would have to dash off to the nearest store and quickly cut them up — we HAD to have orange slices! This is a really fun post — great reading.

Ohhhhhh I loved orange slices after my games (or even during halftime if we were feeling daring ha!). My mom cut everything up so nice and it was such a treat I really looked forward to. I definitely look back and remember that as one of my warmest memories of sports and growing up. Thanks so much for the reminder!