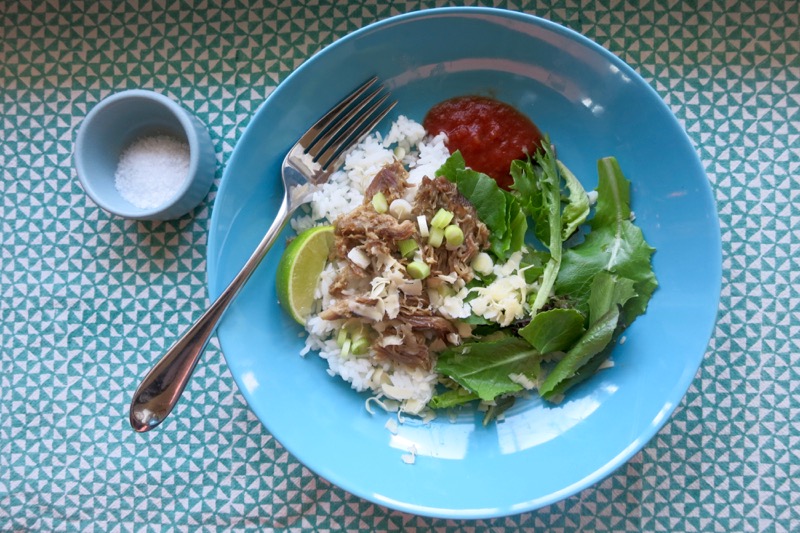 “We’re looking at a pretty dire situation here,” I texted Andy. It was about 5:30 on a Thursday and one of his coworkers was coming for dinner an hour and a half later. The situation in question was the dinner itself. Ever since reading about Diana Kennedy’s famous Carnitas in Genius Recipes, I’d been meaning to try out the recipe, which calls for three ingredients — pork + salt + water — and yielded a result, the book claimed, would prod me “belly first, into a state of frenzy.” That promise, plus the minimal ingredient list, made it seem like a no-brainer for a Thursday night dinner guest. I’d let the pork shoulder do its thing, simmering away in water and its own rendered fat, tenderizing and caramelizing into crispy bits, then maybe serve it with burrito bowl ingredients, the way my kids liked it.

Only problem was that there was not a single sign of that crispy caramelizing. “I might have to order pizza,” I texted again, looking at my unappetizingly gray hunks of pork simmering away. It was supposed to take about an hour and 10 minutes (“depending on the shape of the pot”) and I was nearing 1 hour 45. I walked away. That had been another big draw: the hands-off time. Only at this point, it was more like hands-up surrendering. I needed to come up with a Plan B.

It was low at first, interrupted by a pop here and there, and eventually crescendoed into a full-on Wall of Sizzle. All the water had evaporated and the pork had now reached the point of browning in its own fat. This is not exactly breaking news, but it turns out you do not need much more than pork browning in its own fat to induce a state of frenzy.

An hour later, I had carnitas that tasted like the most authentic dish I’d ever served in the four walls of my kitchen. Do I need to repeat here that it called for three ingredients, two of which were water and salt? It was easy to understand how it earned its keep in the pages of that book, flanked by other iconic recipes like Marcella Hazan’s Tomato Sauce with Butter, Nigella Lawson’s Chocolate Loaf Cake, and Dan Barber’s Cauliflower “Steaks.”

“False alarm,” I texted one more time. “All good.” 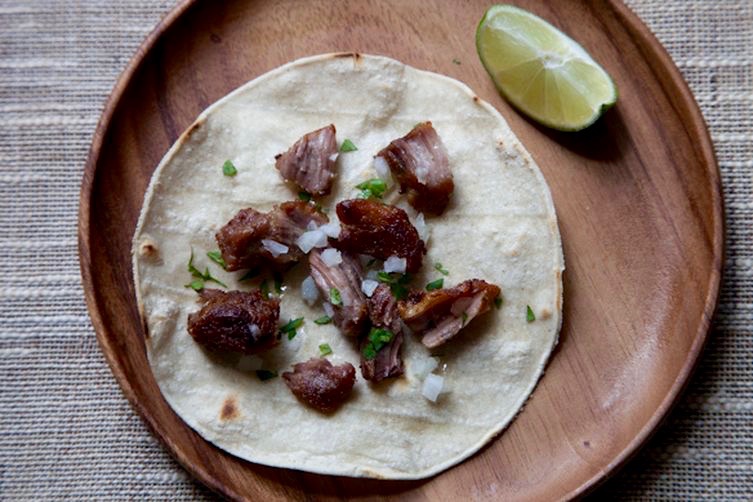 Food52 recommends serving the pork simply — with white onions, cilantro, and lime on a tortilla. Head over there for the recipe. Note: I used the Dutch Oven you see in the pic below — I’m guessing a wider, more shallow pan would’ve had the pork crisping on schedule. 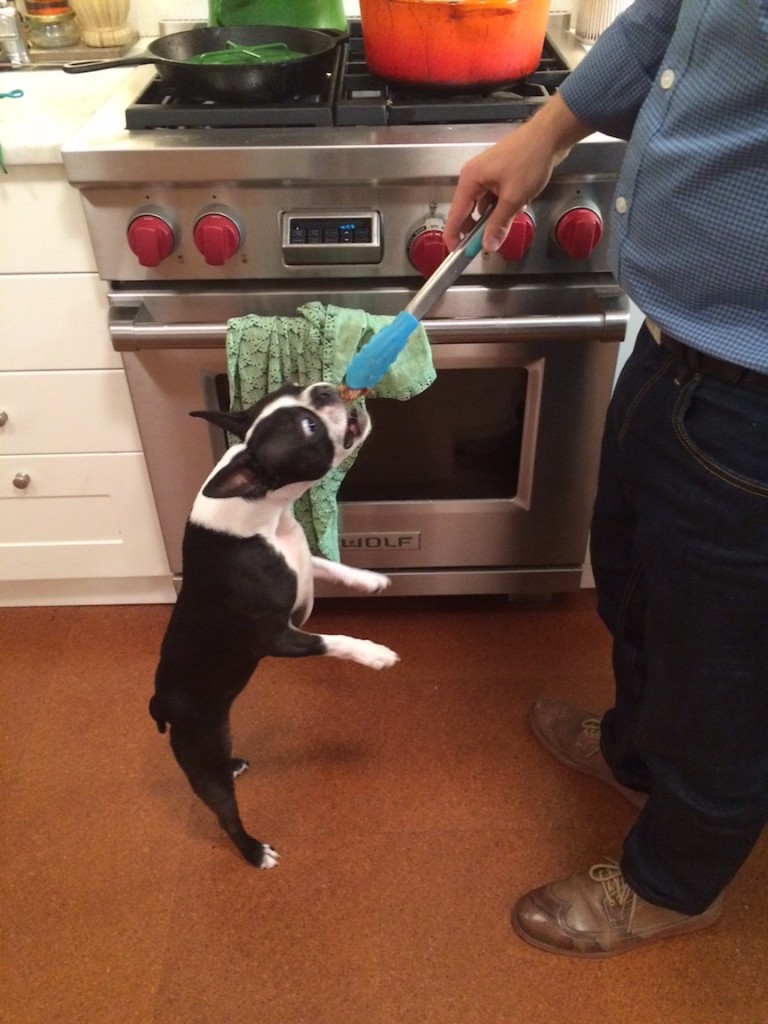 It’s not only the humans of the household who are cuckoo for carnitas.

P.S. I don’t expect you to believe me on this, but I started the post you just read about twelve hours before an editor at Food52 alerted me to the fact that our Pork Shoulder Ragu was officially anointed as a Genius Recipe itself. (I feel like I’ve won a Pulitzer.) Read all about it here.

We make this all the time in the dutch oven and it takes a good 2-2.5 hours. We’ve just started regular whole family meals with our two sons 2.5 and 4.5 and discovered that this meal, which used to last my husband and I for a week’s worth of tacos, when shared with our sons yielded barely enough left-overs for my husband’s lunch the next day!

My two oldest boys are home from college now, and we are definitely going to make this. It looks like a winner!

I LOVE carnitas. I’ve been making a version posted on the Year in Food that has two types of chili powders, cumin, garlic, and orange juice in the cooking liquid. Last week I decided to sub in white wine, and it was fabulous. I make this dish often because I’m a grad student living alone, and I like to do most of my cooking in a weekend afternoon. One large pork shoulder can turn into lunches (and maybe even a dinner or two) for the week. I always eat it with salad. 🙂

Maybe next time I’ll try it this way!

You know, I think the pot you used was fine – the recipe says it takes about an hour and a half to get to the point where the water has evaporated, then a further hour and ten minutes to the point where the meat is browned and ready to serve. Your experience wasn’t too far off from that. Thank you for the recipe . We’ll definitely try it soon, and we use the recipes in both your books all the time. Today I took leftovers of the Kale, Sausage and White Bean stew into the office with a whole wheat english muffin and had a great lunch!

I will definitely make one this weekend! Thanks for sharing this 🙂

My cat would be right there with your dog begging for a bite… sometimes I swear he’s a dog trapped in a cat’s body.

Yay for the “genius recipe” designation for your Pork Shoulder Ragu! We love this so, so much – always a winner when we have company or when it’s just the four of us. I probably make it twice a month in the winter.

Oh carnitas, how I adore you! I always thought it was a taco truck only kind of situation until I realized how easy it was to pull off. Yum!

My pork stuck to the pan – what did I do wrong??? I used pork butt.