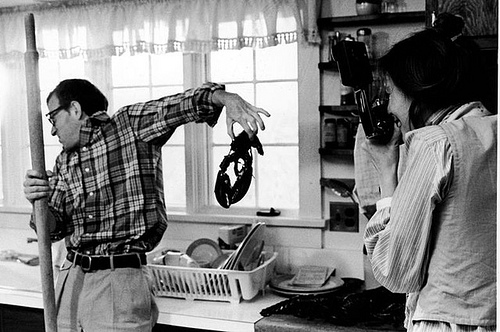 New Year’s Eve is so overrated. I realize I’m not breaking any ground with this statement — which became a mantra in our house long before we even had kids who would’ve insisted on playing Dora dollhouse at 5:30 AM with no regard for how much champagne was consumed the night before. All it took was one aggressively mediocre $100 prix fix dinner out — which offered nothing more special than what you’d find on the menu on a Tuesday night in March — to convince us that we’d be much less resentful of the New Year and way better fed if we just stayed home for the night and watched Larry Sanders re-runs.

That doesn’t mean we don’t properly recognize New Year’s Eve. (As my friend Rory noted the other day, my family has never met a ritual or an opportunity to celebrate that we haven’t seized upon.) Before the kids came along and before Andy’s brother, Tony, and his wife Trish had to go and move across the world to Hong Kong, we used to dress up in our holiday best (for me: black velvet Ann Taylor pants, chunky-heeled Nine West loafers, something shiny on top from Banana) and make multi-course dinners in each other’s Brooklyn apartments that almost always included something worth a splurge. Something special.

Something Special could mean just about anything: a bottle of Champagne that was not procured from the sale bin (1995); a tin of beluga caviar that one of us had received as a corporate gift, served on blinis with creme fraiche (1996); a bottle of 1963 Port that Andy’s dad had been saving for a big night (1999!). But if I am to believe my Dinner Diary — and why wouldn’t I? — the “something special” that, as of 2002, began dominating our New Year’s Eve celebrations was… is… lobster.

It might be dipped in Champagne butter. It might be part of a paella or served alongside a wild mushroom risotto or a citrusy salad or horseradish mashed potatoes. Early on in our parenting career, it was usually just the two of us feasting on 1 1/4 pounders after the girls went to sleep; later the lobster dinner became a family affair that would splinter into two teams: The Tail is Better Team (me and Abby) and the Claws are Better Team (Andy and Phoebe). No matter how the lobsters are prepared or who is eating them, there is a 100% chance that they’ll wind up in the family photo album, with Andy or me doing our obligatory imitations of Woody Allen and Diane Keaton in Annie Hall.

And that’s the plan for this year, too.

A big thanks to GetMaineLobster.com for this past week’s givewaway, the Lobster Feast for Four. (The package also includes 4 pounds of mussels and four jumbo crab cakes that may be the best crabcakes I’ve had in recent history.) GML hand-selects high-quality lobsters and seafood bought directly from well-established, trusted suppliers and ships anywhere in the U.S. Congratulations to winner “Carolyn”  and a reminder to those of you who feel like you missed something: To be eligible for giveaways, you must be a newsletter subscriber. Look for another great one next week. (What can I say? It’s the holidays!)

REMINDER: Advanced Recipe Search is now up and running.

Splurge-worthy Steamed Lobsters with Champagne Butter
Andy has recently favored steaming (instead of boiling) because it results in a more tender lobster. You don’t need to have a special pot for it, you just need a large one (or two large ones if you are cooking a lot — make sure they fit comfortably) that is fitted with a lid that goes on tight. A steamer rack is not crucial — it keeps the lobsters from getting charred on the bottom of the pot. If you don’t have one,  a bunch of lobster sites recommend using a vegetable steamer rack as a backup.

4 lobsters (we usually buy four 1 1/4 pounders)
6 tablespoons butter
1 tablespoon champagne (optional — in fact, I’m not really sure what this adds except that it’s really fun to say)
squeeze of fresh lemon juice

Put 2 inches of salted water in the bottom of your pot. Set a steaming rack inside and bring water to a rolling boil over high heat. Add the live lobsters one at a time, cover the pot, and start timing. (See GetMaineLobster Guideines below; Click here for boiling guidelines.) Halfway through, lift the lid (careful—the steam is hot) and shift the lobsters around so they cook evenly.

To make champagne butter: Melt butter in small saucepan. Stir in squeeze of lemon and champagne. Serve in small bowl alongside shelled lobsters. When eating, save the best (the tail) for last.

OK, here’s the problem. TERRIFIED to cook a live lobster. Love lobster, but I have only cooked meals that I could swing with the tails. Now I know that it would be amazing to cook a whole lobster for my husband( he would definitely swoon). But I don’t know if I can even imagine trying it in my kitchen. Should I get over it? How?

Sounds FAB! Our NYE plans always involve a big pot luck “Mexican” fiesta at my parents house. There are people from at least 4 generations, all friends, even the family. We play games, hang out and chat. Then my dad sets off fireworks in the backyard to cap it off.

Speaking of delicious lobster, Do I win the GetMaineLobster.com feast?!!! I’m a newlywed and would love to prepare such a meal for my husband 🙂

I’ve only ‘discovered’ lobster this year and (duh) LOVE IT. would love to make this a new years tradition!

I am so on the Claws Are Better Team. Sorry Jenny and Abby! 🙂

I think the champagne is completely necessary on the grounds that it is completely excessive. Lucky your lobster camps divide equally up!

Love your site. Thanks so much for it. And hopefully the fantastic sounding seafood haul. With a 2.5 year old I need all the help i can get. Delicious help is the most welcome sort.

As winner of this UNBELIEVABLE prize, I am swooning and doing my very, very best not to type something smug or juvenile. If I did, perhaps DALS readers would forgive me since I’ve never been an “online winner” and this prize is pretty freakin’ awesome. Thank you, Jenny! The lyrical writings of you and your hubby brighten my days!

Fabulous give-away! Would love to win this!

Love this blog! Funny coincidence – there is a deal on Groupon today for GetMaineLobster.com (you can find it under the Pensacola, FL area – not sure why since they deliver…) $99 for $200 Worth of Fresh Lobster and Seafood.

How can you tease us and then not post the pictures of you and Andy a la Keaton and Allen?? Come on! Please?

We have been lucky to enjoy Maine lobster on two (2!!) subsequent vacations. Would love to try this for New Year’s Eve.

Love lobster and love your blog. It’s filling the hole in my heart left by Gourmet. Happy Dinner!

Lobster Brunswick Stew—and marshmallow souffle
Our New Year’s Eve Tradition in Virginia!!!! It’s like a chowder with potatoes, bacon, and corn and, of course, heavy, heavy cream. (It’s only one night a year—and there is Crestor!)