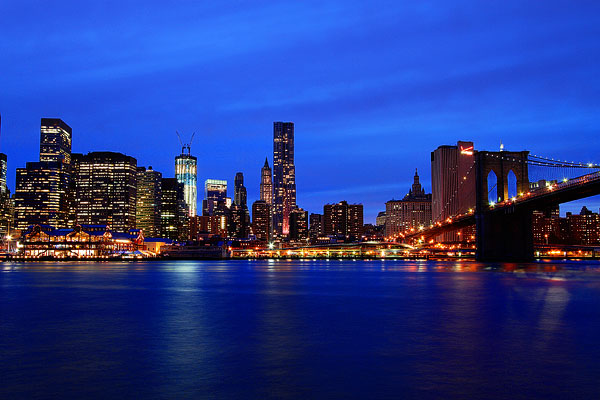 There are other benefits to keeping a dinner diary besides the fact that it offers daily meal inspiration as well as tangible, Pilot-Pen-V5 documented evidence of my obsessive-compulsive behavior. And that added benefit is this: It tells a story. It tells the story of how much my cooking has changed from the pre-Michael Pollan days of the 90s (asparagus is constantly showing up in the winter and butternut squash in the spring) and the pre-kid days (Andy and I would spend entire afternoons tracking down obscure ingredients so we could experiment with, say, a lamb kibbeh. Can you imagine having that kind of time?) But, I realized this week as we celebrated our 14th wedding anniversary, the diary also tells a short story of New York. By now it’s probably clear how much we like to celebrate birthdays and anniversaries in our house in a big way, and to that end, we almost always try to snag a restaurant reservation somewhere special. And special can be defined in a few ways: It can be personally sentimental (like our first one, with the view you see above, was); it can be trendy (as our 8th in 2005 was) or it can just be classically, insanely awesome (as Le Bernardin at 9 months pregnant was). No matter where we went, though, the dining room always seems be charged with the energy that only a special night out in New York seems to offer. Here’s the list…

We had our rehearsal dinner here (and got married right down the street), so it was the obvious first choice for our first anniversary. After our wedding, TRC would subsequently become the go-to spot for our extended family for celebrating big occasions like engagements and important birthdays. But the tables for two that seat both people on the same side  (so no one gets cheated of the view of Downtown Manhattan) was always my favorite way to eat there.

Second Anniversary (1999) Babbo We ate beef cheek ravioli, of course. But what I remember most is that a friend called ahead and picked up the tab, which we didn’t know until the very end of the dinner. This was so mind-bogglingly generous to me that I’ve since tried to surprise diners with drinks and bottles of wine whenever possible.

Third Anniversary (2000) Blue Hill (West Village) This was a few years before Blue Hill at Stone Barns would become the defining restaurant of my life and existence. I was working on a story about cheese for Real Simple at the time and the name “Dan Barber” kept coming up in my research. We wanted to check out the hype at the cozy West Village spot.

Fourth Anniversary (2001) Gotham Bar & Grill It wasn’t even a month after 9/11 but there was no question we were going out — there was no better way to support the city than by supporting downtown restaurants. I don’t remember anything we ate, but I remember there were photographs of iconic buildings and NYC landmarks around the room — including a black-and-white shot of the towers.

Fifth Anniversary (2002) Craft I will never ever get tired of this place with its copper pots and fresh, minimalist menu, no matter how many satellite locations pop up around the world. Doesn’t it seem like there’s one in every city now? No matter, in every single one of them I will order their hen of the woods mushrooms bathed in butter…and walk out happy.

Sixth Anniversary (2003) Le Bernardin What I remember most is the energy. It wasn’t the library-quiet vibe I was expecting of the midtown legend. There was a large family sitting around a table a few feet away and I remember a) being shocked that someone was paying these kinds of prices for kids and b) feeling like that kind of night with kids in a restaurant was as possible as a vacation on Jupiter. I was 37 weeks pregnant with Abby at the time.

Seventh & Ninth Anniversary (2004 & 2006) Rosebank Farms Café (Johns Island, SC) This was back when we could actually go away in October, i.e. during the school year, i.e. during times that the rest of the world wasn’t traveling with kids. That’s how we ended up in South Carolina for our 7th and 9th anniversaries. With the girls. Not our most romantic outings, but certainly more than satisfying in the shrimp-and-grits department.

Eighth Anniversary (2005) The Modern (The Bar Room) We didn’t love the food, and they made us wait for longer than seemed ok, but we had two kids under three and I needed a place that was capable of erasing Swiper and Boots from my memory for at least two hours.  This place — part of MoMA — more than fit the bill.

Tenth Anniversary (2007) Cafe Boulud. We had been in a downtown phase for a good part of our twenties and thirties and had lost sight of a fundamental New York truth: There really is nothing more romantic than Madison Avenue on the Upper East Side in the early evening. It was our tenth so we continued the celebration in Madrid (our first real vacation without kids) where we stuffed our faces with salt cod and jambon for five straight days.

Eleventh Anniversary (2008) Convivio This midtown Italian (which closed in 2008) preceded Michael White’s much heralded Osteria Morini. But Convivio will always have a special place in our hearts because it was two minutes from Grand Central Station. (Increasingly important to us as old hag parents for whom an earlier train meant more sleep.)

Twelfth (2009) Prune I lost my job at Cookie on the same day so much of the conversation revolved around where I was going, as opposed to where we had been. Now that I’ve read chef Gabrielle Hamilton’s memoir, I’m dying to go back to exorcise some demons.

Thirteenth (2010) Degustation The place only seats sixteen people, so I felt special even before I sat down. It’s elegant tapas — my most favorite way to eat — and every selection on the menu is a surprise (seared foie gras with grilled figs and cocoa and hazelnut butter anyone?) Afterwards, we walked down the street to the Scratcher and had some bourbon.

Fourteenth (2011) ABC Kitchen We celebrated at Jean-Georges Vongerichten’s temple to freshness over heirloom tomatoes and crab toasts with aioli, spicy meatball pizzas, beets with yogurt sauce. And we remembered our dinner fourteen years ago at JoJo, one of his first NYC spots. We called that meal our “calm-before-the-storm” dinner because it was the Wednesday night before the wedding, the night before family and friends were coming in to town to raise a glass to us.

Photo of Downtown Manhattan via KevinandAmanda.com.

Love this! We’ve celebrated 3 anniversaries so far, and many of these restaurants are on our list to try. Blue Hill was our first anniversary. 🙂

This is amazing. I love the history here, the story it tells. We lost my husband’s mom last summer just a week before our wedding and so our first anniversary was tied into that other first sad anniversary-we were just talking about having a belated celebration at the River Cafe. Thanks for the beautiful reminder and inspiration.

I must be in a sentimental mood; this made me a little verklempt for some reason. We play the “where were we…” game for special occasions, trying to name where we’ve celebrated or when we took certain trips; your notebook makes it so much easier!

Caitlin, I’m so sorry about your mother-in-law. My father-in-law died very suddenly while we were on our honeymoon (five years ago now, wow), and we are just now getting to a place where we are (sort of) able to separate the two events out. It’s a very hard thing, having those two memories tied so closely together–I remember one of my bad-person moments during the “anger” phase of grief was getting really upset that we’d never truly celebrate our anniversary. Now it’s finally starting to get a little easier. My thoughts are with you and your husband.

We were married in the same week! Hope your celebration was wonderful, with many more happy times to come.

Love Rosebank Farms Cafe! The fried green tomato BLT is to die for!

Love the River Cafe. We celebrated many special occasions there too! My favorite was when I took my grandparents there after I landed my first real job. I can still remember how proud they were to have their granddaughter foot the bill!!

I am planning my wedding for June and as I read this I get all teary eyed just thinking of the adventures we are going to have and I can’t wait to have many memories of places we ate on our anniversary. Congrats to you and Andy!!

We’ve had several anniversary dinners at Prune, and they’re always wonderful, but somehow we keep managing to miss River Cafe. Someday! Thanks for sharing your list.

happy belated anniversary! you were such a child bride! (and, for Andy, child groom!)

Rosebank Farm Cafe is one of my favorite restaurants! I agree that the shrimp and grits is divine. My husband talks about them all the time. My family likes it so much that the last time we were at Kiawah Island we ate there twice in the same week. The fried chicken is also amazing.

Nice article, thanks for sharing.

Around the time you celebrated your first anniversary I spent an evening at the River Cafe in Brooklyn – I knew the restaurant by the view in your photograph before I even read the rest of the post! Hard to forget that view – and the food was great, too, as I recall.

I feel so opportunistic but … I read your newsletter. Do I win the Inmod Teak Bowl?

We also make every birthday and anniversary a memorable food event! I’ve not visited any of those restaurants as I live in Chicago but your 2010 dining experience struck me as particularly delicious with intimate tapas and post-dinner bourbon!

Please tell more about Prune! I loved her memoir.

Please tell more about Prune! I loved her memoir and can’t wait to visit myself.

I am from Canada and recently celebrated my 40th birthday – a big one right? My husband and I and 6 close friends went to Craft based on this post. We LOVED it! Some of the best food ever! And amazing service! Thank you so much!!