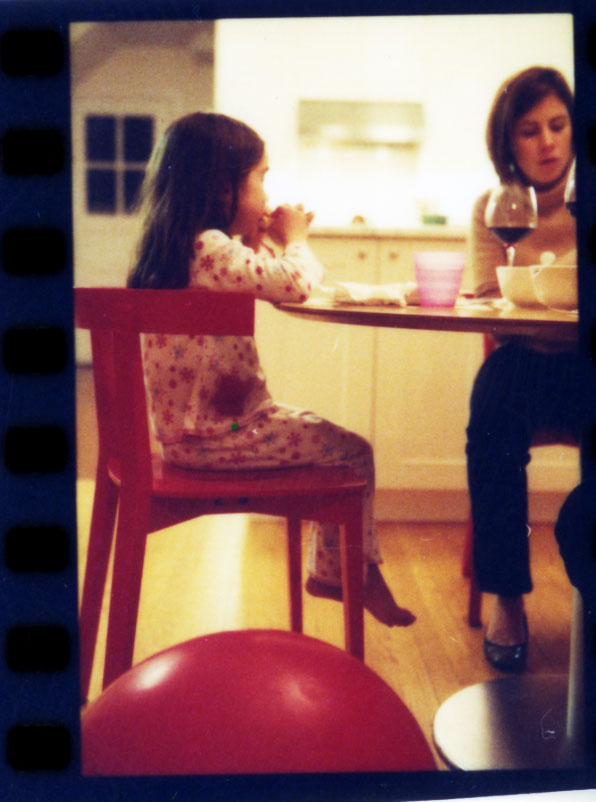 Is it clear yet how I feel about the dinner table? I think it’s kind of a big deal. And I don’t mean that it’s a big deal in the way all those studies tell us it is. Because for every study claiming that kids who eat with their parents do better in school and are less likely to be depressed or on drugs, there is research that questions it. (It’s the self-selecting theory — researchers argue that the kinds of parents who are more attuned to these issues in the first place are the ones more likely to organize quality family time around the table.) For me, it’s much more important to impart how meaningful it can be to sit down to good food with your family. Meaningful in both a micro way, i.e. the tangible, primal satisfaction you get from watching your kids eat well. And meaningful in the macro way, i.e. how what is on that dinner plate can be an entree to larger discussions about the environment, about nutrition, and other such lighthearted topics like the tyranny of mega-corporations and the food processed industry. It’s the macro way I have in mind as I launch what will hopefully be a regular column here at DALS. In it, you’ll hear what books, movies, articles, obsessions my family is talking about when we sit down to eat. Often, you’ll notice, we are not just talking around the dinner table, but about the food on our dinner table. And I guess that’s sort of the point. So with no further ado introducing…

Kitchenlightenment
Around and about the dinner table, June 14, 2010

What I’m watching: King of Corn, the documentary about the two college grads who go about planting, harvesting, and selling an acre of corn in Iowa with no farming experience whatsoever.

What I’m looking forward to watching: A screening of What’s Organic About Organic, followed by a panel discussion with Marion Nestle, June 27.

What the whole family is watching: The World Cup 2010. In my mind, it’s like the Olympics — it doesn’t count as Screen Time. It’s just something the kids need be a part of.

What I’m cooking from: Simple, Fresh, Southern, by Matt Lee and Ted Lee. The fact that I was heading into summer 2010 without this cookbook by the James Beard Award-winning team is frightening. Some of their recipes will be turning up on DALS this week.

What I’m somewhat surprised by: Gourmet‘s Next Life.

What words of wisdom from Jimmy Dean, Sausage King (1928-2010) I plan on quoting to my kids tonight: “You can’t take rejection personally. You have to say, ‘Well, that dumbass just didn’t know any better.'” (From the always brilliant What I’ve Learned column in Esquire.)

What I’m reading: The Unhealthy Truth, by Robyn O’Brien, Taste of Civilization, by Janet Flammang

What I’m supposed to be reading (for book club): Cutting for Stone, by Abraham Verghese

What Andy is reading: Manuscripts that will soon be books, proposals for books. But no books. (Though, he did just acquire a book by the Pulitzer-Prize winning Michael Moss tentatively titled Salt, Sugar, Fat.)

What Abby, 6, is reading: A Series of Unfortunate Events: The Bad Beginning (with Mom), Little House in the Big Woods (with Dad)

What Phoebe, 8, is reading: Athena, the graphic novel by George O’Connor, via Myles at You Know, For Kids

Have a good week.

Anyway, I just needed to throw that out. BUT, we did have meaningful conversations with mom in the car or on the bus.

As for the world cup, as a your Brazilian reader, I have to say that this makes me like your family even more.

I love this list.
When I watched King Corn it pretty much changed my life. It’s hard to say that about a single movie. But it seriously opened my eyes and got the ball rolling on eating local and cutting way down on HFCS.

I value family dinner time tremendously too & it’s sometimes hard for me because I work 3 evenings a week….I reeeeally cherish the nights when we’re all together.

Love your list, will look forward to more, and as one of your English readers whose life can grind to a halt during the World Cup I have to say – I like your family even more too!

really impressive on all levels.

what do you think of the book the unhealthy truth? is it worth the buy on amazon? anyone here read it? We are also watching the world cup…lots of fun to be part of a world wide event!

Cutting for Stone is an awesome book–read it! I love that you love family dinner. As a pediatrician it is one thing I consistently recommend to my families. Keep writing