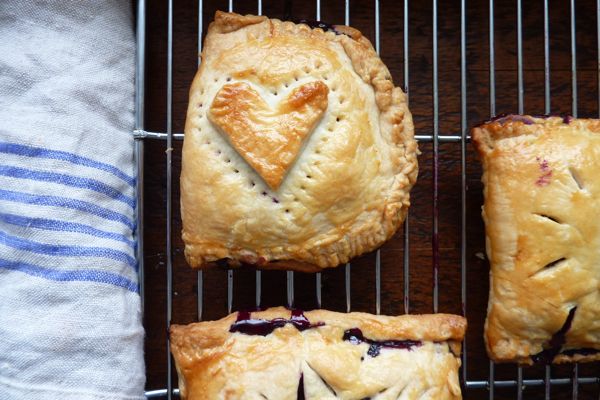 My first boyfriend in high school was so dreamy. He made me mixed tapes that introduced me to exotic artists like Steve Miller Band and Crosby Stills and Nash and Dan Fogelberg. When he wrote me letters, they were in all upper case — BECAUSE EVERYTHING I SAY IS IMPORTANT! he explained. He was different from the quarterbacks my friends crushed on, seemingly hailing from another, cooler era — wearing plaid pants to the prom, calling hot dogs “scorched poochies,” and saying over and over in between drags of his Marlboros that he was “mad about me.” He called me “Rosie” and, in writing, addressed me as his “Brown-Eyed Girl.” I was so crazy about him, and subsequently that song, that I recorded it on one side of a tape six times in a row so I could stare dreamily at my bedroom ceiling without having to get up to press rewind on the cassette player I shared with my sister. (You can imagine how my sister felt about him and his Van Morrison.)

“I don’t believe in Valentine’s Day…Cool?”

We hung up, I pressed play on my Peter Cetera compilation, crawled into bed and wept.

I was crushed — especially since I had planned on surprising him with some handmade card that listed all our superfunny private jokes — but not as crushed as I was a few months later when he dumped me, and, as I tried to talk sense into him, asked if we could finish the conversation later because his ride was here for the Jethro Tull concert. We did end up getting back together on and off for three more years, and in fact, laugh about all this now, but I credit him with turning me into a hardened Valentine’s Day Cynic long before it was cool to be one.

So Andy won’t be getting anything this year (not even a Mad Lib Love Letter like last year), but of course, the kids are a different story. We already have a bunch of chocolatey things wrapped up for them, plus some customized bookplate stamps, which were supposed to be stocking stuffers and which I completely forgot about until after the holiday. And if we have time, we might repeat the little un-ambitious baking project we worked on together a few weeks ago — hand pies with or without hearts. Just like last time, I’ll use storebought dough and whatever Trader Joes fruit is in the freezer. Maybe this time, for old times sake, I’ll introduce them to Van Morrison while we do it. 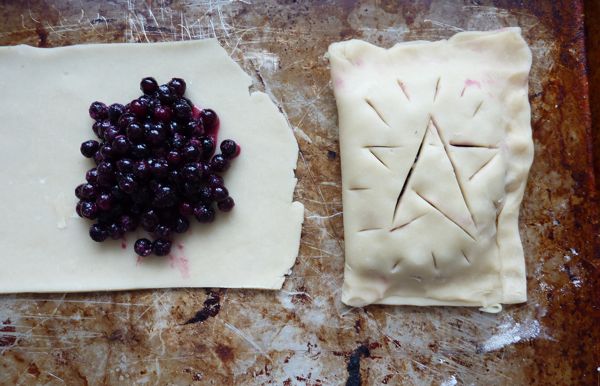 First, using a knife, we cut two rectangular-ish pieces out of one piece of pie dough. Then I mix whatever fruit I’ve got — these are thawed frozen blueberries, but you could just as easily do a few sliced apples (Granny Smith, Cortland, Northern Spy) or the Trader Joes jarred Morello cherries — with a little sugar, a squeeze of lemon juice, and a little cinnamon. I place a fist-size mound one one side of the rectangle, then fold over a shown on right, pinching the sides all around. 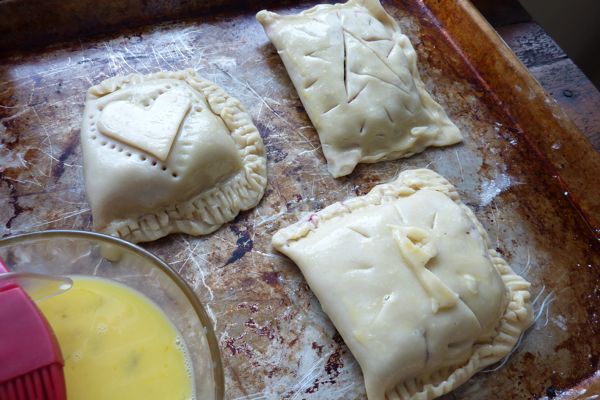 I ask the girls to make designs with the slits or hearts and initials from dough scraps. They also add the crimping around the sides (pressing down with a fork), and brush on the egg wash. (One whisked egg.) Then we bake at 375°F, for 30-40 minutes, until fruit is bubbling out of vents.

It’s a good idea to periodically check in on them to ensure they don’t look too toasty. If the crusts get too dark before filling is bubbling out, cover with foil and continue baking.

i am so glad that despite your vday cynicism you still “celebrate” with the kids. my grandparents could not afford to buy those lil vday cards kids give each other. i was the kid who did not hand out cards. i’m not a pessimist or bitter because of it by any means, but if i ever do have kids, i hope it’ll occur to me to hook them up with something to give to their classmates, if they still carry on this tradition in school…

Ha! Love the all upper case love letters. My cynic smoked marlboros too. And the mixed tape included R.E.M. and Led Zeppelin. Need to bring those songs into the kitchen!

Oh goodness, I talk in upper case too! BUT I DO IT BECAUSE I GET SO EXCITED! Like a toddler! Or a puppy. But I don’t pee on the floor. What is happening with this comment, I am so sorry! Boo on that wacky ex of yours. Yay for these hand pies, can’t wait to try!

Oh and I’m going to try these with some frozen cherries I have in the freezer — my husband daughter will be so thrilled!

Doh.’ husband AND daughter’. sorry for all the spamming, I’m way too excited today 🙂

Great idea, we are also Valentine’s cynics, and have been ever since too many over-priced and uninspired restaurant dinners on the 14th. Now we just use it as an excuse to bake, eat chocolate, and snuggle the kids more:)

Melissa – you made me laugh!

And these pies look easy and yummy, perfect project for my 3yr and I.

Ahhh, young love. My cynic had a pony tail and drew me a picture of the two of us together (it was pretty bad) and gave it to me in a frame.

We have a tradition of making a delicious dinner at home.

I’m a hopeless romantic who has no significant other in her life. But I put a few hearts around the house and have treats for my girls and heart plates. These pies looks gorgeous!

Love this! I am a vday cynic myself, having been dumped mere hours by my college boyfriend after our (cheseballs and forced) vday dinner. He wanted to get back together with his ex. I was crushed. He wasnt a marlboro smoking badboy but a pretty (and vain) italian guy that called me doll (i couldnt make this up) with brown eyes to die for. Thank god my current love hates this holiday too.

Hey do you know this website??
http://punchfork.com/
Have you ever consider signing up to it?

Whoa – I am not sure I remember hearing about this heart breaker?!!? No matter – he has no class for luring you in with Steve Miller and cigs, only to turn a classic Hallmark holiday into a “I’m too cool for school” event. Good thing you are holding the torch for your girls (and Andy too 🙂