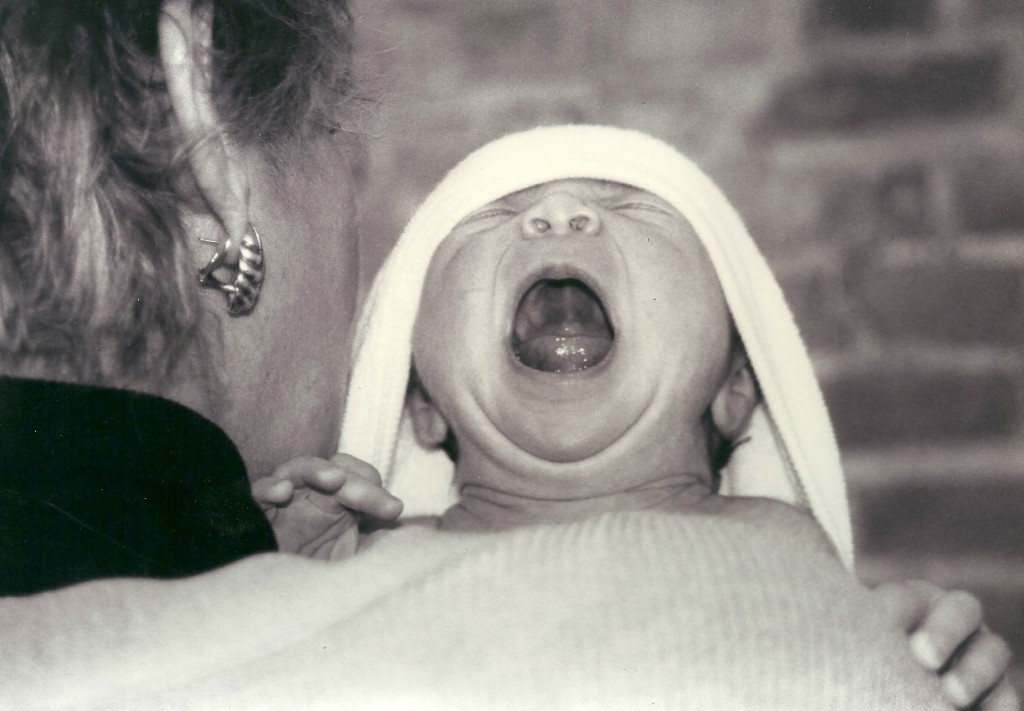 About a decade ago, when the girls were 6 months and almost 2, I showed up to the lobby of my office building just as I had every morning for five years and started rooting around my bag for the I.D. that would grant me access through the turnstiles. It was probably about 9:30, which meant I had likely been up four hours, and the caffeine hit from the single cup of coffee I allowed myself (breastfeeding, pumping, etc.) had long worn off. I seemed to find everything else in that bag — wallet, yellow-capped Medela bottles, Disney figurines — but not my I.D.  Watching everyone else glide through to the elevator bank was too much for my sleep-deprived state — so I stood there and wept. Surely this was the worst thing that could ever happen to any human. Where the hell was my I.D.? Why couldn’t it be right where it always was? What was wrong with me?

Had I read Jennifer Senior’s new book All Joy and No Fun I would’ve probably had the same outsized reaction, but I’m guessing I would’ve been a little more forgiving of myself. Because among the many things I learned in her meticulously reported book on the complex state of modern parenthood (based on her widely discussed 2010 New York magazine cover story), I learned that there wasn’t much I could do about my reaction — it turns out that the way we handle sleep deprivation is a fixed trait, with most of us fitting into one of three major groups: “Those who handle it fairly well, those of us who sort of fall apart, and those who respond catastrophically.”

This tidbit seems small and almost obvious, but as with most things, to understand the science, to read the hard research on why our houses have become messier than any time in history; why a three-year-old is biologically incapable of responding to logic; why I loved — craved — going to work when my kids were little (when I remembered my I.D.); why moments of unbridled parental euphoria are so hard to capture in the day-to-day life with kids…to drill down deep on all this stuff is both instructive and comforting. Especially when the reporting is interspersed with personal stories from parents across the country. All in all, I’d say that reading Senior’s book felt like one big exercise in what the medical folks might call normalizing.

All Joy is also a fascinating chronicle of the many paradoxes of modern parenthood including, but not limited to:

The most interesting paradox for me, though, was the fact that All Joy is really much more of an anthropological look at parenting than it is a parenting guide — Senior says this right away in her introduction — and is fundamentally based on the fact that raising happy children is harder and more elusive than it has been for any previous generation. And yet I came away the opposite of scared. Did I recognize myself in the story about the woman from Texas signing her kids up for tutors and football and softball without really knowing what the end game was? Yes. Did I freak a little when I read how a Brooklyn mom described her role in her teenage daughter’s life as “the pit crew?” (“I change all her tires, polish up the car, and get out of the way…then she peels out.”) Did the entire section on adolescence and its corresponding downward spiral effect on parental happiness scare the daylights out of me? Well, yes. But, oddly, when I closed the book, the more overwhelming feeling I experienced was that we were all in this together, struggling with the same (mostly unanswerable) questions — and even having a rough guide to the territory makes me feel just a little more mentally equipped to take the trip.

We’ll see how I feel about this theory in a few years. 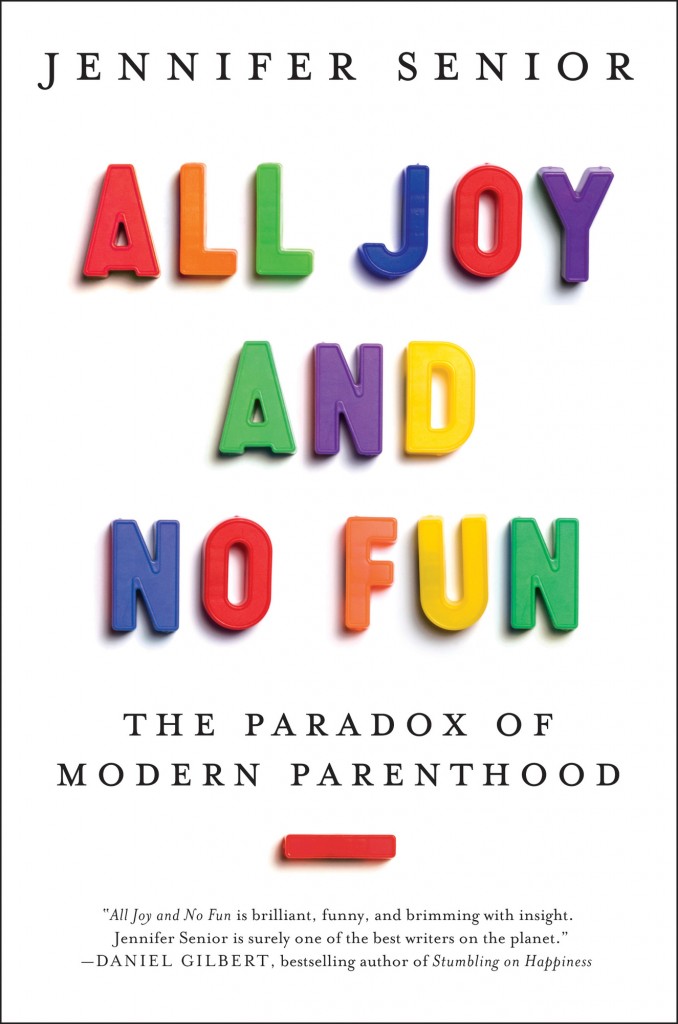 Related: Jennifer Senior on Fresh Air. Also: a few cool giveaways coming up on facebook and instagram this month, so make sure you’re checking in.

Purchasing this for spring break – now let’s see if my boys will let me read it…. 😉

P.S. I am one of those who fall apart with out sleep….! Killer.

I heard the Fresh Air interview and was captivated! I found the information to be wildly interesting and yes, made me feel better about my own state. I can’t wait to read the book (you know, in my free time).

I cannot wait to read this. xo

I’m going to order it today. I’ve always wondered why my husband handles sleep deprivation better than I do…and I always lament that I can’t send my kids out to play the way I used to growing up. This would explain it. Thanks for the post!

When I had my first kid, one of the best pieces of advice I got was from my Aunt Theresa. She told me to always talk to other parents with kids the same age as mine. She told me that I would almost always find that my struggles were normal. She was SO right. Adding this book to my list.

I heard an interview with the author on NPR a couple of weeks ago and have been intrigued about this book since. Thanks for sharing.

I read it after seeing a recommendation for it. I am still in the early stages of parenthood, but it was a great book with really great topics to think about. Many of the highlights that you pointed out, especially about being more connected but feeling more alone really touched home.

I SO relate to feeling like I’m my teenagers’ pit crew; I can almost guarantee I’d like this book. Thanks for sharing.

Just finished this book. I have little kids. The studies are great! My favorite part of the book is the Joy chapter, and the discussion about the word “duty”. Taking care of my children is my duty, and I get to love it too (when that impossible, which is most of the time).
I confess, I do parent like the Dad in the book (currently watching a soap while the kids nap), and I never felt bad about it. I do feel bad about the juice addiction….

it sounds fascinating, just added to my kindle. the number one thing i want for my son is to be happy — but i worry all the time that i’m not doing the right things.

I am so excited to read this. I have one son…want to have another, but it would mean quitting my job. I’m one of those “catastrophic” sleep deprivation handlers…but at least now I know. 😉

I can’t wait to read this. And I definitely feel like my daughter’s pit crew.

I read this and as the parent of 3 adolescents, I found that chapter fascinating – probably one of the best I’ve ever read. It gave me new insight to the questioning that’s been going on in my mind – I had never thought it could all be connected, my kids and all the recent pondering of my choices and career. It at least made me feel like I wasn’t crazy!

Thanks for the recommendation.

It seems like a must read. I must say that fourteen years into being a parent of four that I am still sleep deprived. I am now staying up to help with homework, I am out until ten watching foul shooting contests, I am up at six cooking the kids a good breakfast to start the day…It is so hard to often see the light since I am so caught up in the day-to-day, which can be lonely, hectic, and a bit monotonous. My husband often tells me to try to step outside of it so that I can enjoy it more, it is fleeting.

What a great review from such a personal perspective. I remembered when the book came out that you had previewed/mentioned it on the blog before, and I’m really inspired to get my hands on it now. As the mother of a two year old with one on the way, any encouragement I get to be more forgiving with myself is worth its weight in gold!

I’m halfway through this book and i LOVE it. My husband and I don’t have kids yet but the “when” discussion is starting to happen. I definitely echo your sentiments of feeling more mentally equipped from reading it.

I had been following this book, but after reading your write up, bought it. I totally relate to the your out of proportion exhausted weepiness re ID. Also my purse is a running joke among my coworkers as it is a bottomless pit containing all sorts of Inspector Gadget type problem solvers for toddlers, babies, and coworkers alike. Tide Pen? Sure, I have one. But it usually takes me a few minutes to dig out my work ID.

Bought this yesterday based on your review and am captivated already. It’s really well written and the information is so relevant for my hustand and me – parents of 2 boys ages 2 and 5. We are planning to read it together – us adults, not with the kids 🙂

Yeah, forewarned is forearmed, esp. regarding teens. Will check this out, thank you.

I am definitely intrigued enough to read the book. The paradox of being connected digitally 24/7 yet isolated has been on my mind as well. However, I am having a hard time accepting as normal things like being pit crew for my teenage daughter (or toddler for that matter. They can start early). Or that empowering kids with life skills leads to them rejecting parents’ authority. Or that a parent can sign a kid up for an a
activity and not know the end game. It makes me feel sad, if that is “norm”. I have four kids ages 15 months through 15 years old. My parenting experience taught me that is is ok to fall out of “normal” (meaning generally accepted) approach, and have kids to be their own pit crew.

The title speaks volumes. This book is on my to read list, thanks for the tip!

As a mother to three teen boys, I just can not relate. I am thrilled my boys are teens and my husband and I have never been happier as parents. Truthfully, in talking with friends and parents of our boys, most parents seem to feel the same way.

My boys are independent which frees up my time to enjoy myself and to spend more time with my husband. We love these teen years and find them truly fulfilling in ways parenting babies, toddlers and young children could never be.

This sounds like a fascinating book, even for those of us who are already through the trenches of parenthood. Kind of like reading reviews of a movie you’ve already seen . . . thanks for the thoughtful review.

Just finished the book and came to comment first thing. I LOVED it! The last chapter had me in tears. I was leery because the beginning was making me feel a little hopeless (I have two little ones) but in the end it actually inspired me and made me feel less pressure to be the perfect parent.