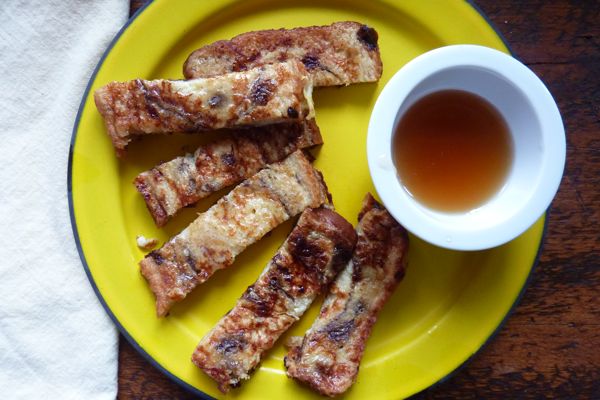 In the very early days of DALS, I wrote a short post about my Aunt Patty, who introduced us to the life-altering pleasures of (a) Marcella Hazan, and (b) Marcella Hazan’s milk-braised pork loin. Patty did a lot of things well in the kitchen, that rare person whose talents matched her ambitions. Porchettas; marinated, butterflied, grilled legs of lamb; real tiramisu with real, espresso-soaked lady fingers and hand-whipped cream; lemon-zested ricotta cheesecakes in spring-form pans: the woman could flat-out bring it in the food department. But like any artist, no matter how inspired, she had things she was good at, and things she was great at.

She was great at breakfast.

I can remember coming down in the morning and seeing Patty, in her New Balance running shoes and ankle socks – she usually got up at 5 am and knocked out six miles – standing at the butcher block island in her kitchen, surrounded by greased Pyrex dishes and cracked eggs and softening sticks of butter and the wrung-out skins of oranges she’d juiced by hand and boxes of powdered sugar and waffle irons with decades-in-the-making grease patinas so thick you could scratch your name in them, and four burners blazing. On the stove, she’d have the whole package of bacon splattering away, oatmeal – real oatmeal, the steel-cut McCann’s kind – simmering in the back, and a pot of coffee, percolating (!), which she drank black and in insomniac quantities. Could anyone possibly eat all this? No, of course not, but that wasn’t the point. The point was: There was some part of Patty that took great comfort in preparing an ungodly, nearly pornographic amount of delicious stuff in the morning — cooking is therapy, she always used to say — and I was fortunate enough to be the beneficiary. The best thing Patty made, though, was French toast. There were a few key reasons for this: one was butter. Patty did not fear milkfat, and was morally opposed to margarine. Another was cream. (See above, re: milkfat.) Still another was vanilla: she always used a bit of it in her soaking mixture, which really elevates the whole deal, but not in an obnoxious, cloying way. Finally, though, what made Patty’s French toast so absurdly good was that it was never just French toast. She was known to soak her bread in egg nog, and the bread she used was never just boring white sandwich bread: it was thick Pullman bread leftover from the night before, or challah, or even rounds from a baguette, or, best of all, slices of sweet, cinnamon-raisin bread. For a kid, this was the breakfast mash-up from God. It combined three great things – French toast, butter, and cinnamon rolls – and turned them into something a thousand times more greater. It was some kind of joke, it was so good.

I busted a version of this out for the kids last week, in an effort to get them out of the breakfast rut that has been driving Jenny and me insane lately– Pancakes. Bagel. Cheerios. Toast-n-jam. Repeat – and I didn’t hear any complaints. In fact, when Abby made her way downstairs, she said, “Mmmm, what smells good?” (As opposed to, “Where’d you put my socks?”) I cut them into sticks, which they dipped into syrup, and they licked their plates clean. Jenny, who is currently trying to be healthy, said, “How dare you do this to me?” Don’t blame me, though. Blame Patty. And by that I mean, thank her. — Andy 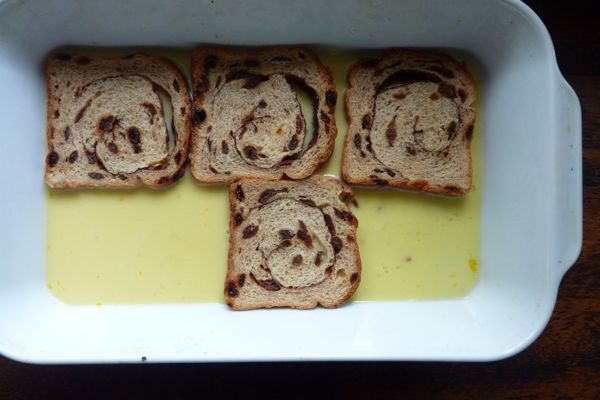 Cinnamon Raisin French Toast (serves two little ones)
We store our cinnamon raisin bread in the freezer. Not only does it last longer that way, but when it’s time to make Patty’s French toast, the bread retains its structure better when soaked in the egg mixture. You won’t have to worry about it breaking apart.

2 eggs
1/3 cup milk (In an effort to not clog arteries unneccesarily, I use 2% milk, but I’m not going to sit here and tell you it doesn’t taste better with cream)
1 tsp sugar
1 pinch salt
1/2 tsp vanilla extract
4 slices cinnamon raisin bread
unsalted butter

In a baking dish, whisk eggs, milk, sugar, salt, and vanilla until mixed thoroughly and sugar is dissolved. Heat skillet — we use our cast iron — over medium heat and add a decent pat of butter. As the pan heats, nestle slices of bread into the egg mixture, and let them soak for about one minute per side. Remove slices, letting the excess liquid drip off, and transfer to the pan. You want to hear a little sizzle when this happens. When the bottoms are golden brown, about 2 minutes, flip — maybe adding another pat of butter here — and repeat. Remove from pan, cut into strips, serve with a dipping bowl of maple syrup, and watch the magic happen.

Cinnamon Raisin Bread was such a treat by itself in my youth, I can’t imagine the taste delights in store if I made french toast from it.
Yum.

If Aunt Patty was morally opposed to margarine, then we are probably soulmates on some level.

My mother makes an absolutely unholy french toast with chocolate chip challah and sneaks a bit of Grand Marnier into the egg mixture prior to dipping. I pinky swear this will change your life. Not in the same way as Aunt Patty, but don’t think, just do.

My “secret” ingredient is vanilla bean paste–it smells so good and tastes even better!

There is something about the “details” involved in preparing breakfast foods that make them truly special. Or perhaps it’s just that so many of them take kindly to butter. (It seems I too have a thing for milkfat.)

I need an Aunt Patty! Seriously! Great story-I can just picture her making breakfast. I can’t wait to try this-Thanks for sharing.

We made these this morning. Yum! Glad to have something the kids like for breakfast besides pancakes and cereal. Thanks for the good idea (and thank Aunt Patty for me too.)

YUM! I love breakfast at breakfast time, and even at dinner time sometimes. The sticks sound like a fun way to entice the kiddos! Thanks- I can’t wait to try this out.

This looks like a fab idea for the little one. She’s turned into a fussy eater – has strange likes (sushi and terryaki beef). I might try this in the morning.

I made these on Sunday morning. They were amazing! I used Challah bread and 2% milk. Fabulously tasty! My husband, kids and I all thank you for the many wonderful recipes that you share! Your cookbook is my meal bible! I look forward to your posts everyday. From a mom who is learning to cook!

Jenny–You & Nephew give me way too muc credit. So much so that it has earned you a forever permanent place in my coveted Epic category. Love to The Debs.
Auntie
p.s. Why do I have to answer that stupid dopey dumbed-down question when you know full well I am not human. YOU ANSWER THIS: What is 9 + 3 + 7 – 3 x 17 -9 +11 x73 divided by 99?

I make French toast and freeze it in plastic bags to pull out and de-frost for breakfast but have not tried the cinnamon-raisin kind. What a great idea!

We tried this over the weekend and the 1.5 year old gives it two thumbs up. Yum! (PS: Your newsletter sent me. Do I win the apron?)

Aunt Pattie sounds like the best person ever! That morning set up is my lifetime goal, people settling in for an amazing stomach lining breakfast and coming back for lunch/dinner. such a great family environment.

I am also very jealous that I had instant oatmeal for breakfast and not cinnamon french toast.
… May if I could run 6 miles……

Oh my! I made this on Sunday, using homemade cinnamon bread from Saturday.

Pure heaven! Thank you so much for changing the way I look at french toast!