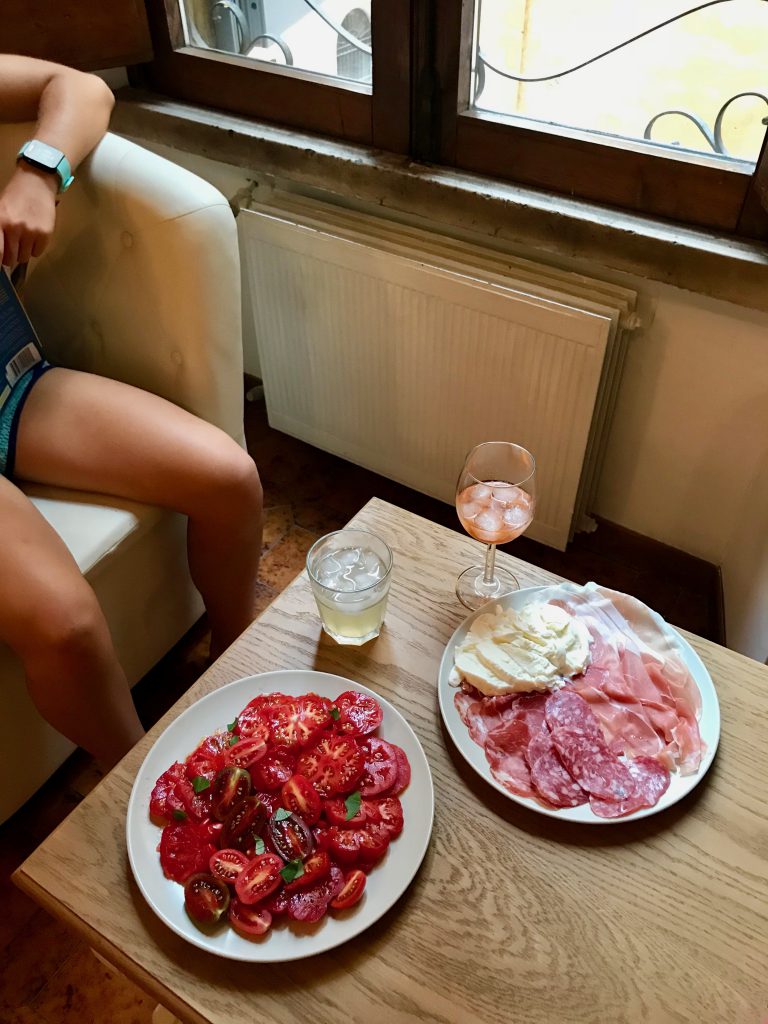 Forgive the radio silence over on my end. Those of you who follow me on instagram likely know by now that we are traveling in Italy (Sicily via Rome) and eating our weight in pasta, gelato, and pizza everyday. It’s the trip of a lifetime, and I know I say that every time we travel, but what can I say? We have only a few summers left with the kids, and that adds a layer of appreciation to every trip we take. Anyway, you can be sure you’ll be reading a detailed play-by-play of the trip soon enough, but for now I wanted to share two meals we’ve made at home, by which I mean, in our airbnb kitchen’s that essentially come equipped with salt and pepper.

The first was in Rome. I think this was the day we clocked over 10 miles on Phoebe’s Garmin watch, and we decided we’d make our own spritzes and cook in, because we had a huge lunch and because…well, why am I explaining myself? You guys know we love to cook in our own kitchen we we travel. A big part of the fun is collecting things as we wander. And luckily on this day we were wandering through the Mercato Testaccio, a huge market that sells everything from produce and meat and fish to sandwiches and pizza and salads. (Or at least that’s what I read, not saw, since it was August, many of the vendors were shuttered.) After I inhaled a sausage and spinach sandwich from Mordi & Vai, I looked across the aisle and bought… 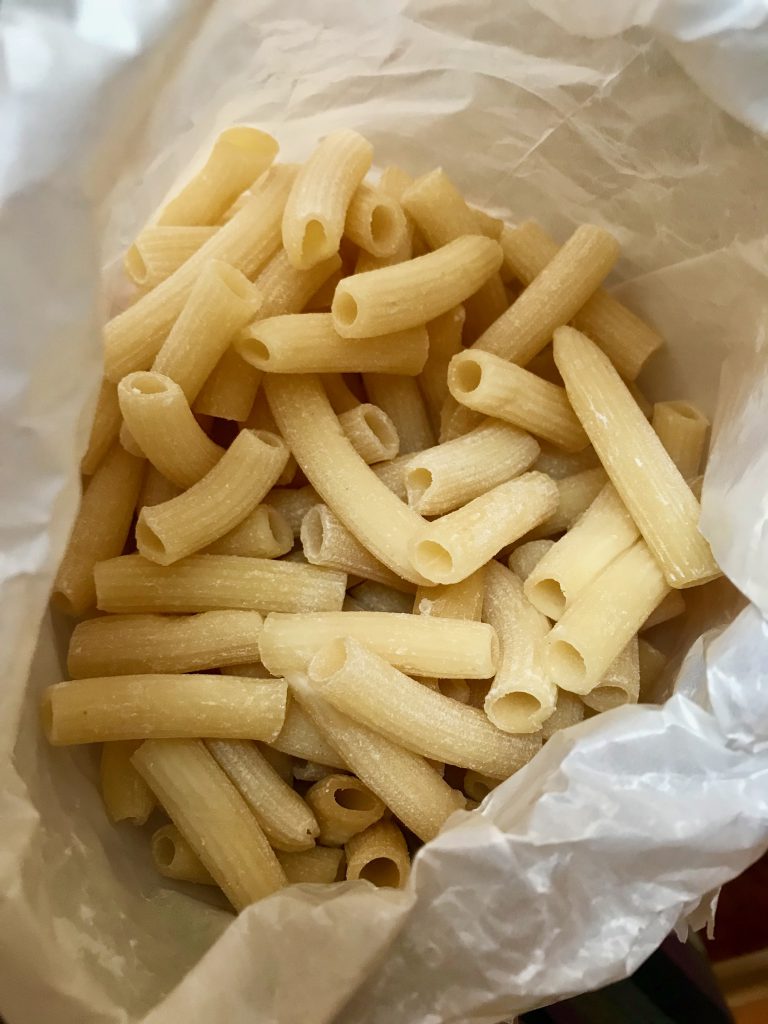 .
…a pound or so of this beautiful rigatoni, which they were making behind the counter. In Abby’s words, “You know it’s fresh because they are all different lengths.” Next… 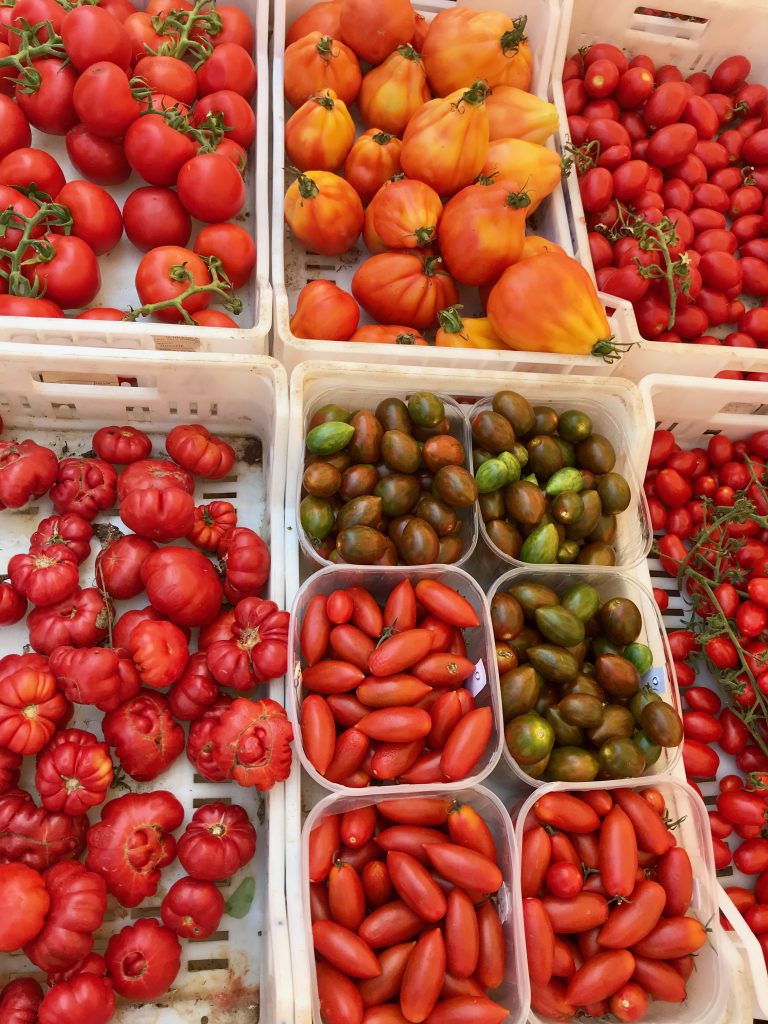 .
…while we were weaving our way around the charming streets of Trastevere, we came upon an outdoor market and picked up some greens and some tomatoes. Although “some tomatoes” doesn’t exactly do that purchase justice. They were deep red — like that deep red you only get for, like, three minutes in New York in late August — and aromatic and perfumey even from a foot away. 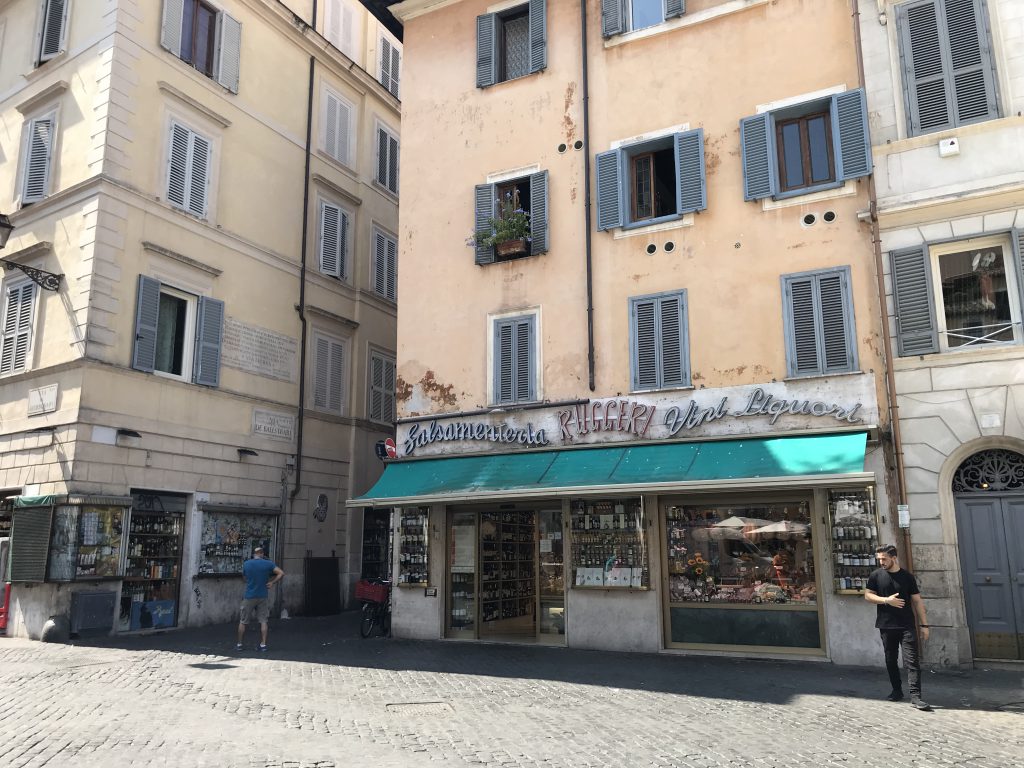 .
Later, in Campo de’Fiori (the huge outdoor market, which was only a few blocks from where our airbnb was), we stumbled upon this beautiful little store and bought some crazy fresh mozzarella (I thought it was burrata, my bad, but we survived), and then right next door at Roscioli (boy you will hear more about that place), a little jar of Cacio e Pepe sauce. I know what you’re thinking: A jar? Consider our options, though. We were only cooking one night and we didn’t think it made much sense to buy a hunk of parmesan, butter, olive oil, and pepper. (The apartment did have salt.) Plus, this was not Chef Boyardee sauce. Thinned out with a little pasta water, it looked like this… 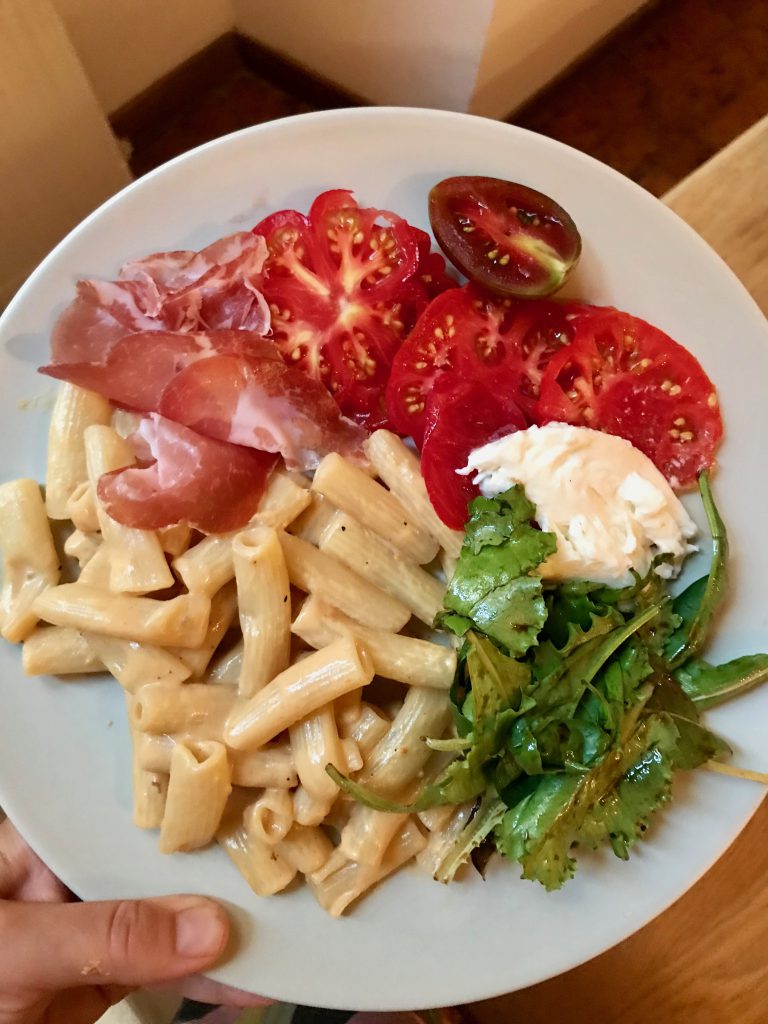 .
And tasted like heaven. Nice right? Oh, and the meat? We bought a pack of speck, prosciutto, and salami at the local supermarket that I would’ve paid a fortune for back home. All in all, as simple as it was (it would’ve been fine even without the pasta, actually) it was one of the more memorable meals of the trip and I plan to recreate it at home with Andy’s recipe for cacio e pepe and a nice spritz. 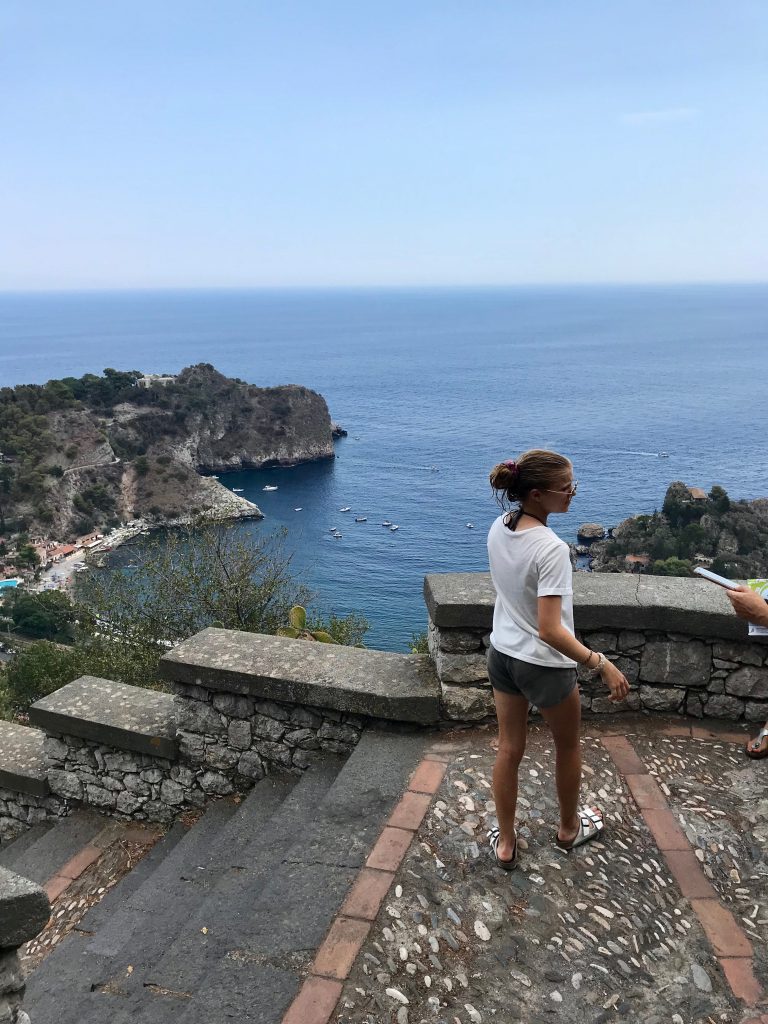 .
The second meal we made at home was in Taormina, Sicily, where, at every turn, you see a view of the Ionian Sea that looks like the above. Naturally, we were craving seafood.  And it’s not like we were sick of pasta and pizza and focaccia and arancini  (not even close), but a light dinner appealed to all of us, especially if we could find something local and fresh and pair it with…a spritz.

We figured, how hard could it be to find a fish market on a tiny little hilltop seaside town? Turns out, almost impossible. I guess this is where you’re supposed to feel sorry for us, because all we could find… 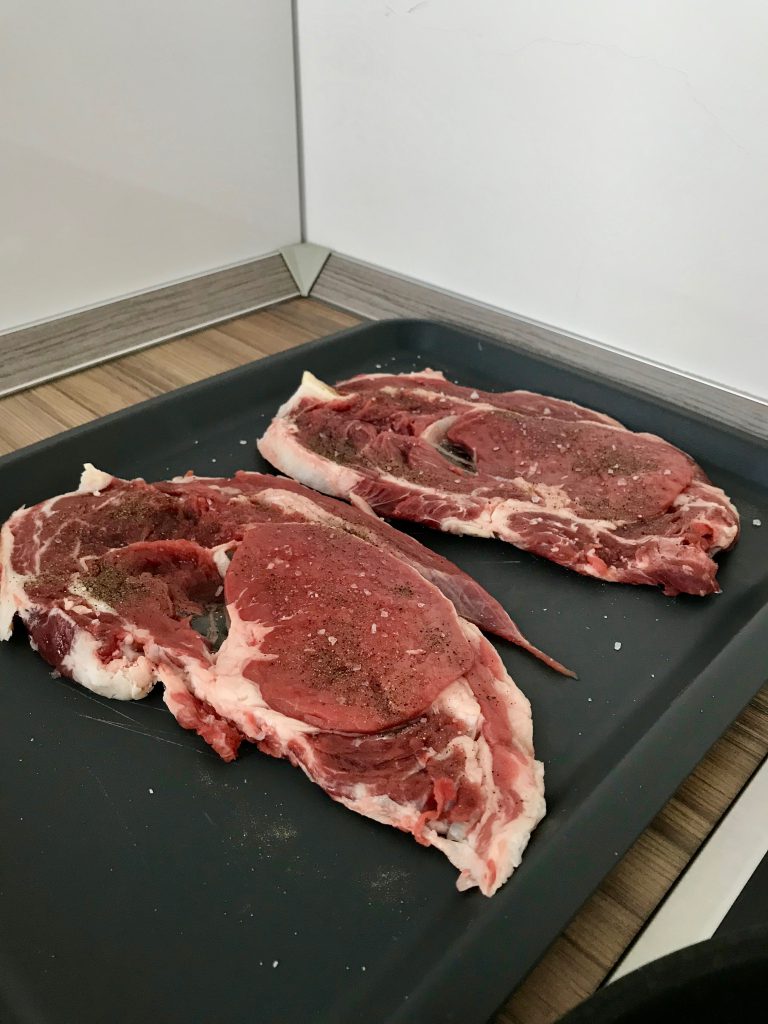 .
…was the greatest local butcher who spoke no English and sold us these beauties, a bottle of local wine, and some bocconcini. (I did find a fish market the next morning…message me if you want to hear details.) 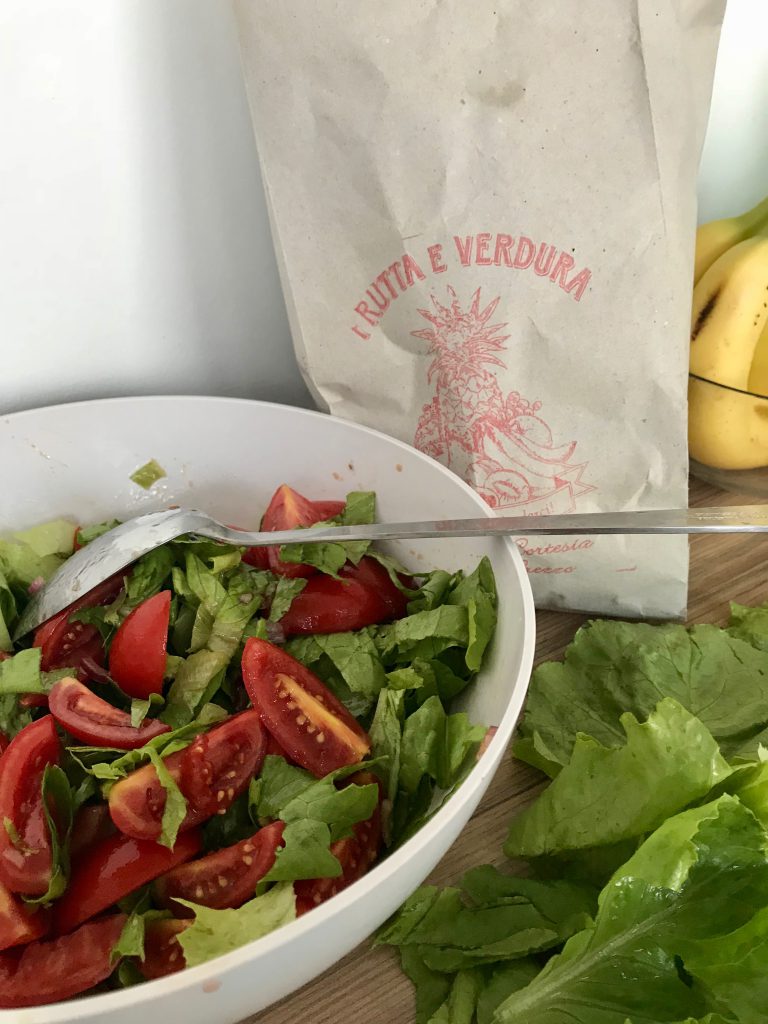 .
Andy pan-fried the steak, sliced it up and we tossed it with tomatoes, greens, and shallots (procured from a produce stand on our street; look at the beautiful bag the vendor gave me to hold the bounty) and bocconcini, balsamic vinegar, olive oil, which the airbnb miraculously had in the pantry. I might’ve added parm or grana instead of the mozzarella, but trust me, I’m not complaining. It was fresh and light and left us with just enough room in our bellies for a gelato up the hill. 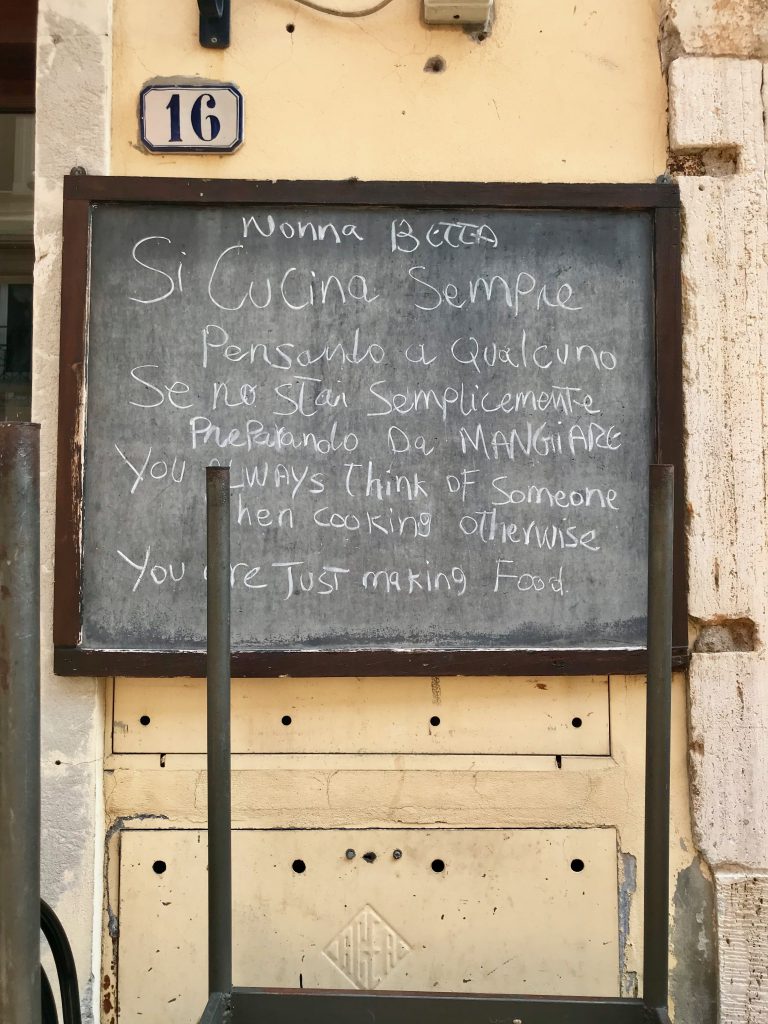 .
And I’ll leave you with a nice little reminder no matter where or what you are cooking. It was written on a chalkboard outside Nonna Betta, a popular Roman/Kosher restaurant in the ghetto: “You always think of someone when cooking, otherwise, you’re just making food.”

Have a great weekend!

What a lovely post–your pasta with the parm sauce, the saying outside Nonna Betta . . . The comment about only having a few summers left with the kids struck me–I’m 38 and even though it’s been a long time since I lived at home with my parents, some of the best, most memorable and hilarious trips of my life have been with my parents since turning 30. I can see you doing that with your grown “kids,” too. Enjoy!

Yes what a lovely trip and I agree with Em some of my best trips with my parents have happened after 30 where we can do things together that we couldn’t or I wouldn’t when I was a teenager. Though I love these recaps as it makes me want to go and see, Sicily has now been added to my must see list.

We were in Italy last summer and enjoyed some of the same food (and miles walked) as you are! How is your pasta-hating daughter faring? Has she come around yet? Now would be the time!! (my one regret is only bringing home one half-eaten bag of taralli. i recommend you hit a larger grocery on your way out –COOP or Pam–and get as many goodies as your bags will hold!)

Man oh man, that meal is just what I want! I’ll take the second one too!
Have tried many times to subs to your posts but I never get them, can help?

Oh I still dream of my trip to Sicily a few years ago. Are you going to Cefalu? Go to Cefalu.

Would you mind sharing the airbnb links, if you’d recommend!? Apologies if I missed seeing these somewhere.