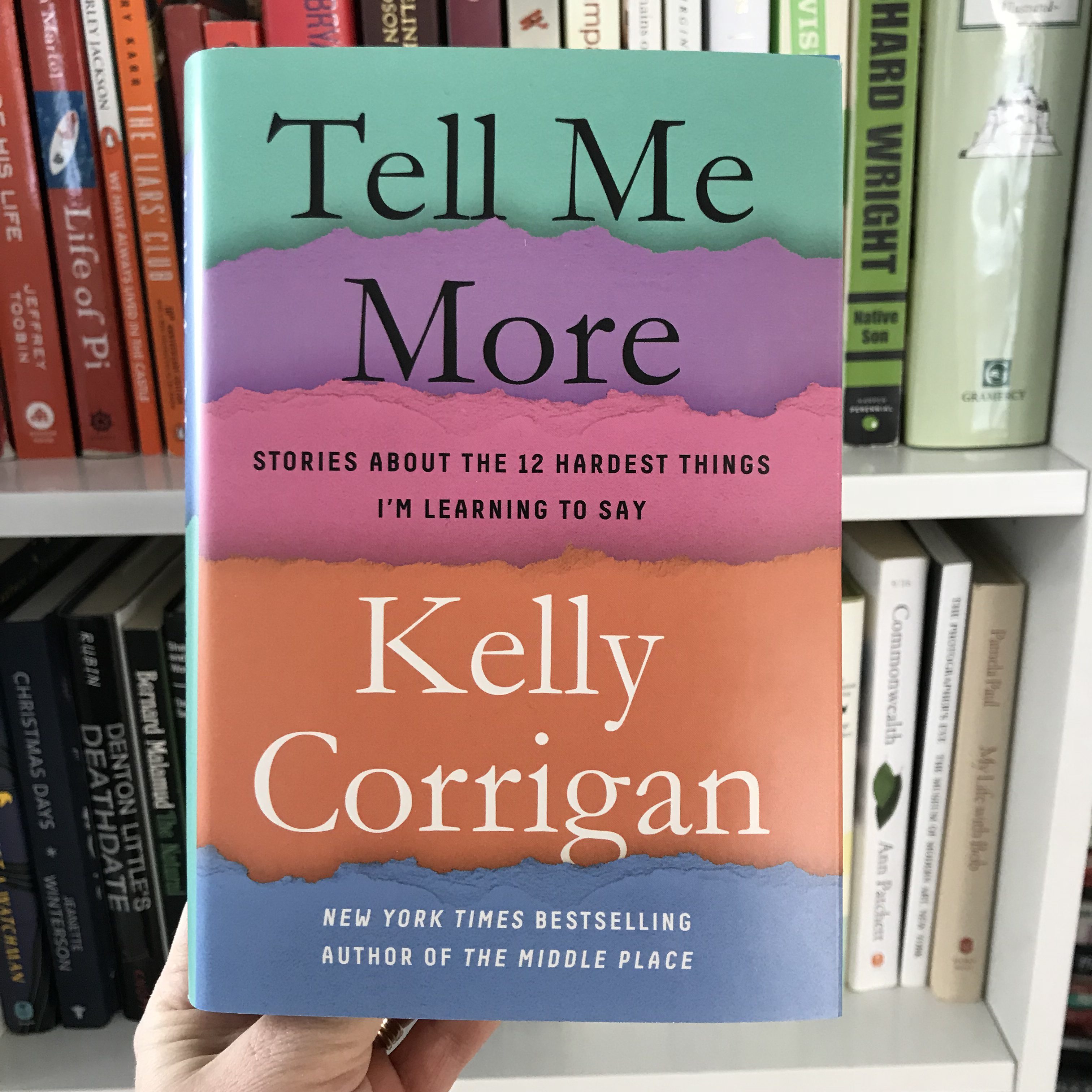 Last week, we here in the Northeast found ourselves trapped in the clutches of some pretty fierce negative single-digit winter weather. Remember that love letter to my Fitbit I wrote less than week ago? It’s still on my wrist, but all I will say is that as of Thursday morning, when the first storm hit, it was in zero danger of short-circuiting. No school, stores closed, activities canceled, roads too slippery, it was all I could do to even change out my pajamas in the morning. I’m not complaining, though. I always think of Amy Krouse Rosenthal’s quote about bad weather: “[It’s] your pass to stay inside, to retreat. It’s cozy and safe, hanging out on this side of the gray.” For the past week, hanging out on this side of the gray meant, of course, cooking (predictably ragu and granola made cameos), but it also meant Netflix binge-watching, reading things beyond my twitter feed, and lots of family hang time. I wanted to share my top three highlights. 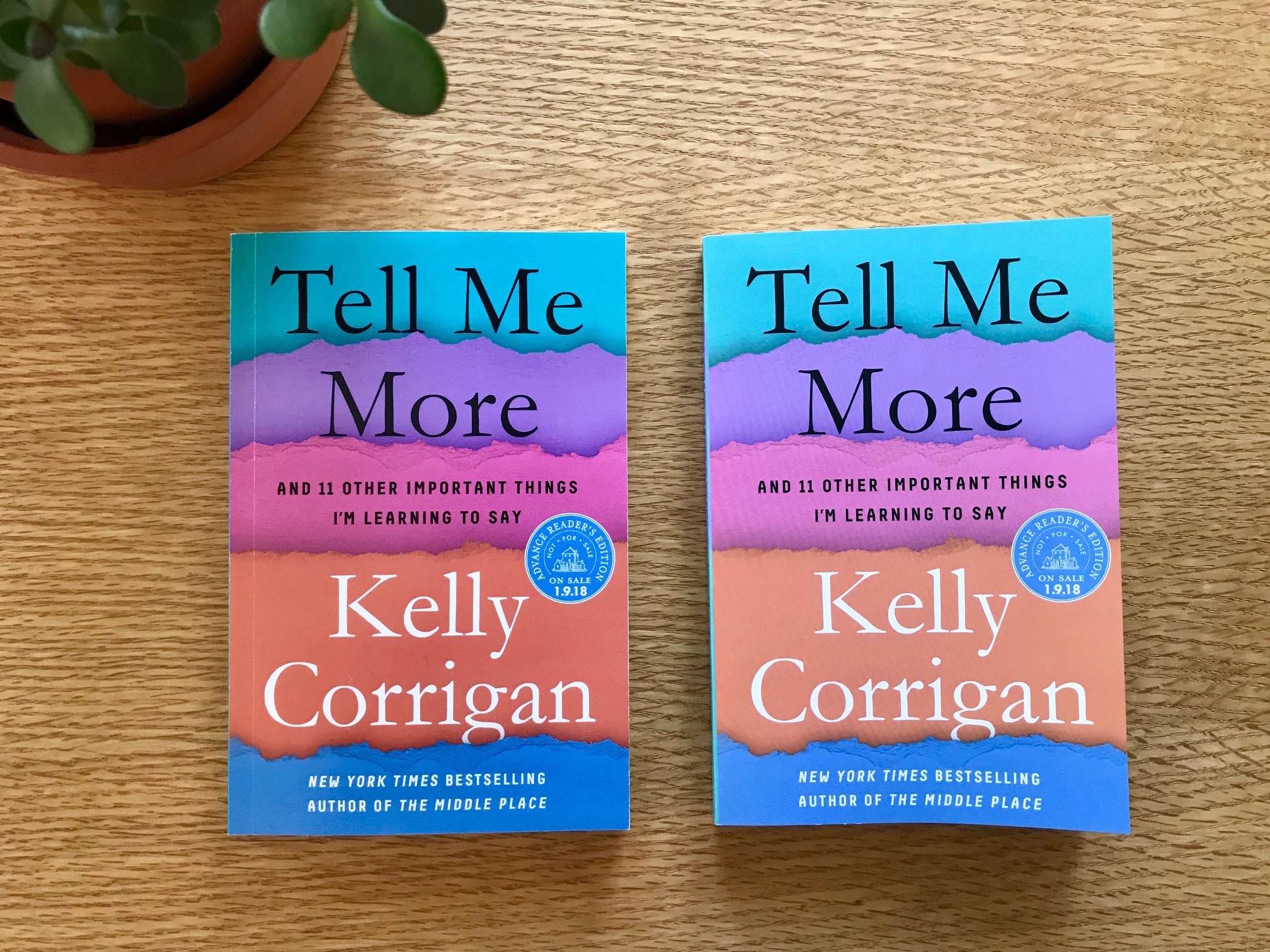 Tell Me More For those of you paying attention, the first time I read and loved an advance copy of Kelly Corrigan’s book was a few months ago, but it wasn’t available to the wider world yet, so I didn’t want to give it the full write-up it deserved if you couldn’t run out and read it right away. Now it’s finally available, and let me be the first to tell you to please run out and read it right away. Right away. Like many of you, I’ve been a Kelly Corrigan fan for a long time, but this book has stayed with me longer than any of her others, and I was so happy to have an excuse to read it again, this time under seventeen blankets in front of a roaring fire. It’s a collection of essays, organized by a dozen important phrases she believes she must learn if she is to call herself a grown-up, i.e. “Good Enough,” “I Love You,” “Onward,” “I Was Wrong,” “I Don’t Know.” Corrigan’s gift is the way she is able to tease out wisdom and joy from the most quotidian moments of family life and then a few pages later drill deep on the heaviest episodes of loss and grief. “I Was Wrong,” my favorite essay, begins with a story about her dog, Hershey, who has a propensity for eating the, uh, solid contents of toilets (you will laugh your ass off) and ends with the death of her grandmother, who she regrets not knowing better in spite of her father’s (Greenie’s) insistence: “What took me much longer to understand is that too love someone is to love the people they love, or at least, to try,” she writes. “It’s so obvious to me now: My father wasn’t asking me to keep a regular visitation schedule with [my grandmother] as if she were my dentist. He was asking me to know her, to enjoy her, not to let her go to waste. That was my mistake. I’m sorry I missed her, Greenie. I was wrong not to know her.” Loss is a recurring theme. As is Greenie, who we all fell in love with in The Middle Place, and whose presence and spirit appears un-diminished in Kelly’s life in spite of his death two years ago. In the title essay, she zeroes in on the magic of asking questions and listening, and marvels at the enlightenment and happiness it brings people (including the listener) when they are really truly heard — that goes for everyone from her sixth grade daughter dealing with mean girls, to the guy sitting next to her on the plane, to her father on his death bed wanting to communicate regrets big and small in his final moments. (That scene will break you.) All you have to do, says Corrigan, is say “Tell Me More.” Like much of her advice, I want to apply it immediately. Or at least as soon as I’m finished binge-watching… 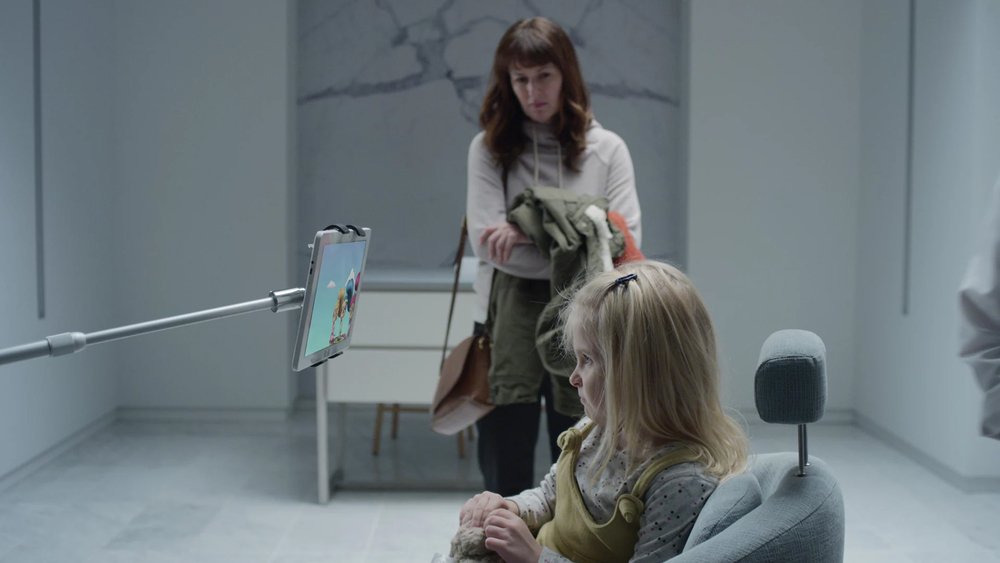 …Black Mirror I was into this series a few winters ago, but it wasn’t until Season 4 was released a few weeks ago that I started to really “crave” it, as Phoebe would say. For those of you new to the BBC sci-fi series, each episode is like a stand-alone mini movie, Twilight-Zone style, and you can watch them out of order. They range from psychological thrillers to straight-up cover-your-eyes horror films, but they all deal with an ambiguously dated future where technology that is supposed to make our lives better has somehow gone wrong. Darkly, horrifically wrong. (What is perhaps most terrifying about the series is that the plots don’t actually seem very far-off.) Three favorites so far are “Metalhead” (it’s like Terminator meets The Road, and possibly the most pared-down man vs. machine plot one could dream up); “U.S.S. Callister,” which we keep calling the “Landry episode” because FNL’s Jesse Plemmons plays the creepy villain (and is stunning); and Arkangel (shown above; and directed by Jodie Foster!) which is about what happens when a mother implants a chip in her daughter’s head so she can not only track her whereabouts, but also see through her daughter’s eyes, and read her daughter’s vitals with the tap of a screen. You can probably imagine how that one turns out. As Phoebe says, there are never happy endings, only somewhat-less-uncomfortable endings. 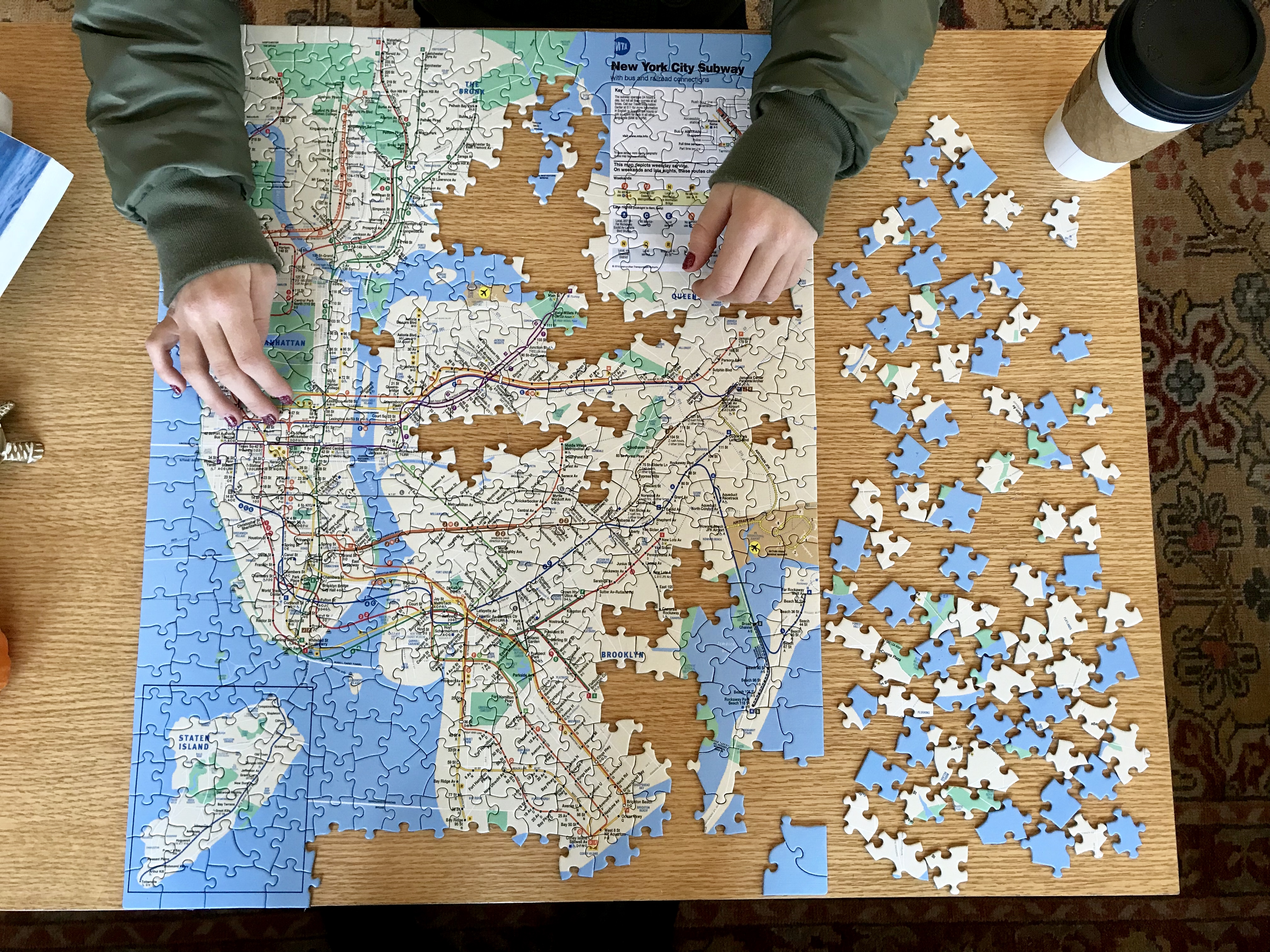 Puzzles I gifted this 500-piece NYC Subway Map Puzzle to the girls for Christmas. They are old enough to be exploring the city on their own now, and I thought it would be fun for them to literally put together the subway system as a way to get more acquainted with it. (So far, they have mastered the 4, 5, 6 in Manhattan.) Maybe it’s not so surprising that I ended up being the one who had to get everyone excited about actually assembling it. When I dumped the 500 pieces on the table in the living room, Andy wandered in, stopped in his tracks and asked “Are we the people who do jigsaw puzzles now?” I replied “Boy you are hilarious, bet you can’t put together Brooklyn?” You know how this ends. All of us figuring out our own corner of New York, sometimes in silence, sometimes in frustration, eventually in triumph. I was a little surprised by how comforting it felt to sit there sharing one simple, but collective, goal. (I ordered two more: next up.) Also, wow Queens is large.

Full disclosure: Andy edited Tell Me More, so if you feel that compromises my opinion somewhat, please check out this starred review in Kirkus and this one in USA Today, neither of which were written by anyone related or connected to Corrigan.

Puzzles are also great for parties!! I’m not a puzzle-lover or an introvert, but my roommate is and she taught me a great trick. We are at the point in life where we make friends in small pockets of life and they may not all know each other, but we sometimes put them all in one room for a celebration. Last year for her birthday, we set out a puzzle which became an excellent way for strangers to bond over an activity, and gave the introverts something to do so they could feel part of the party without necessarily having to get up and talk to everyone. And if no one ends up wanted to put it together, it can just go back in the box for the next event.

We break out a puzzle to work on all week during our extended-family spring break in the OBX. I’m not really a puzzle person, otherwise (a girlfriend once said, “aren’t jigsaw puzzles for people who don’t read?” because, really, why not pick up a book.) But i do appreciate the social aspect of it. [cooked up a storm during our cold snap…roasted chicken, and then from DALS: tortilla soup, chickpea/broccoli rabe pizza, chili, pasta con ceci, and from HTCE: sour cream coffee cake!]

We have a Christmas jigsaw every year. It sits on a table and people come and go from it. It’s a wonderful non-confrontational way to sit comfortably with someone you perhaps haven’t seen in a while, talking when you want to or just been quiet in each other’s presence.

Can I just say how much I love DALS? It’s everything I want and love. Food, family, books – such a delight!

If you really are becoming people who do puzzles now, I recommend Liberty Puzzles. They are gorgeous, wooden puzzles with unique shaped pieces. Next level puzzling for sure. https://www.libertypuzzles.com/

wow, those are gorgeous. Thank you for the tip Melissa!

When we were in Boston last year, we picked up a puzzle of the metro system as one of our souvenirs. Our girls quickly rushed to put together the green line and a handful of others they knew like the back of their hand!

I’m going to read Tell Me More just on the strength of how good The Middle Place was. Having a chance to hear more about Greenie is alone worth the price of admission.

Hi! A Brit here…just wanted to let you know that Black Mirror is a Channel 4 production as opposed to BBC. Channel 4 are known for being the edgiest and most experimental of the terrestrial channels in the UK. Think Shameless, This Is England, Skins…the back catalogues are worth a look when Netflix has been exhausted!

Thank you for recommending Tell Me More. I have struggled to find a new normal in the aftermath of profound personal loss a little over a year ago. The author’s stories perfectly articulated things I have felt, but couldn’t quite give a voice to.