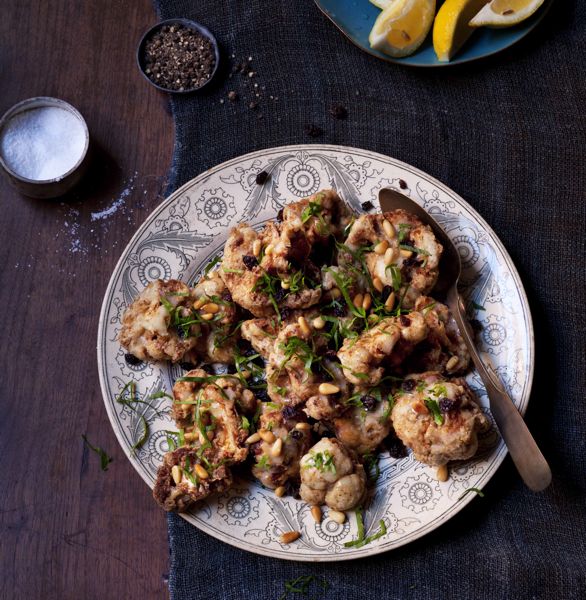 Some days I look at this screen and wonder how on earth I can spin a story out of thin air about a pork chop or a kabocha squash. And then some days, like today, I can’t believe how much I have to say about a head of cauliflower. So many different roads I can go with this, I’m not sure which one to take.

I could tell you about my brother-in-law, Nick, who is famous in our family for his habit of eating an entire head of cauliflower (raw, unadorned, stem and all) as soon as he walks in from work. But the guy deserves an entire post (character study?) all his own, so look for that one soon.

I could also tell you about my dinner last week downtown, and how I almost didn’t go because the day had been long and there was some babysitting drama and instead of getting on a train and a subway, then back home again, what I really wanted to do was just pick up the girls at soccer and not have to worry about someone else finding or not finding the field in the dark. Well, guess what? It turns out you do not need an advanced degree in astrophysics to drive at night and follow directions (insane, handwritten directions with lots of maps) and I was worried for no real reason. The little snag reminded me of a rule I used to live by, but haven’t been so great about following: When I have the chance of doing something or not doing something, I’m rarely going to regret getting my butt in gear and doing it…in partaking.

Especially when, on this particular evening, the partaking was happening with one of my more favorite dinner dates, Lia, at one of the more exciting restaurants in New York, Einat Admony’s Balaboosta on Mulberry Street. The name is Yiddish for “perfect housewife, wonderful mother” and also serves as the title for Einat’s gorgeous new cookbook geared towards home chefs…who aren’t necessarily perfect housewives or wonderful mothers. Her food is what I would call modern Mediterranean (Harissa-spiked hot wings anyone?) and I swear I could’ve eaten everything on the menu (and everything in the book). But Lia and I managed to narrow it down to six or seven small plates — including shrimp kataif, shredded kale and brussels sprouts, burrata, and a crispy cauliflower dish that was topped with pine nuts and currants and was, to be honest, mind-blowing, worth the commute in and of itself.

Lastly, what I could also tell you is that the following week when I pulled a head of cauliflower out of the CSA box, I found myself standing next to my daughter, who I felt like I hadn’t heard from in a while. I mean, I had heard about the math test, and I could see her working on her soccer juggling in the backyard, and I knew she was thinking about being a vampire for Halloween. But I hadn’t really heard from her, if you know what I mean. And it just seemed to be the exact right time for me to hand her the recipe for the Balaboosta cauliflower, teach her how to cut off the florets with a paring knife, shake up the vinagrette in a jam jar, and talk about some real stuff. On principle, I can’t get into the details on what the real stuff is these days, but let me just say that because of Einat’s beautiful little recipe — simple enough for a tween to help with, but complicated enough to keep her talking and standing next to me for a good 20 minutes — I’ll probably be relying on this recipe a lot in the next few years. 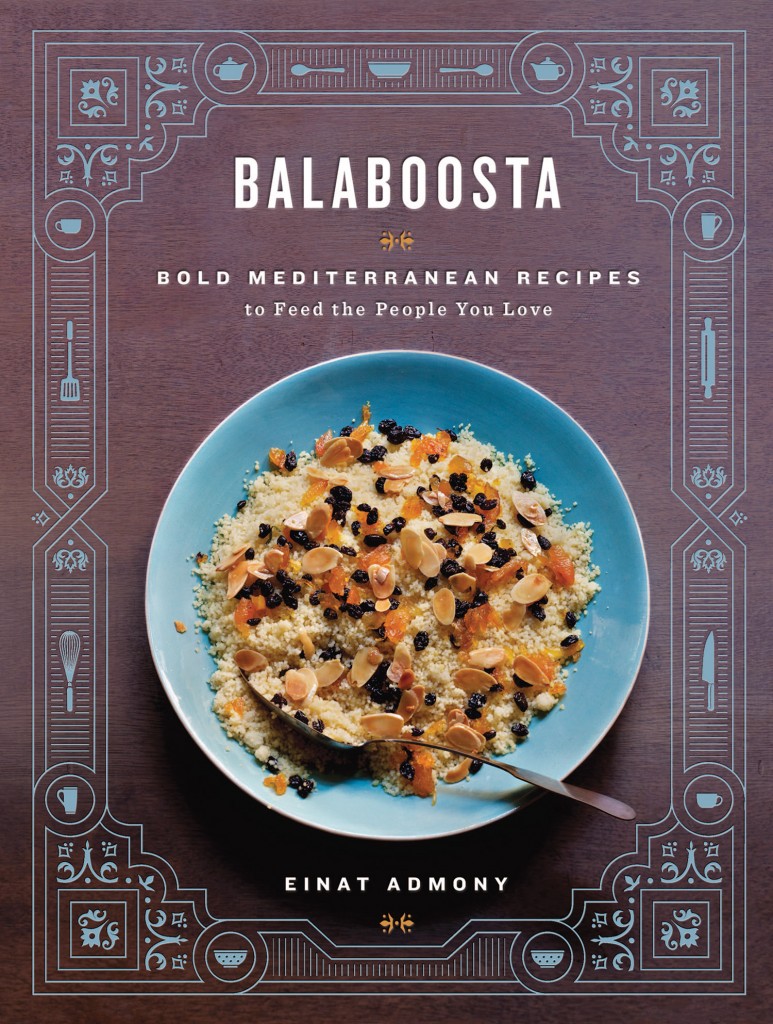 Cauliflower Everyone Loves
I’m not the only one who finds this dish magical. Apparently, it’s one of Einat’s most-requested items on the menu. I cut back on the amount of oil called for (5 cups) in the book, but trust me the dish still lived up to its name. I served with a simple roast salmon and green salad. Serves 4 to 6; recipe from the beautiful Balaboosta: Bold Mediterranean Recipes to Feed the People You Love.

1. Whisk together the vinegar, honey, and mustard. Slowly drizzle in the olive oil and whisk to emulsify. Add salt and pepper and set aside. (Or add all ingredients to a jam jar, seal tightly, hand to your kid, and have him or her shake it like crazy.)

2. Bring a large pot of water to boil. Add cauliflower and boil for 2 minutes. Remove with a slotted spoon and drop into an ice bath to stop the cooking. (Or just put it on a paper-towel lined plate, like I did.)

3. Combine the flour, salt, and pepper in a large resealable bag. Throw in the florets, seal, and shake until thoroughly coated.

4. Heat the oil in you large skillet or a Dutch Oven to medium-high. Working in small batches, carefully drop florets into the oil and fry until golden brown, 3 to 5 minutes. Using a slotted spoon, transfer to paper towel-lined serving bowl.

Hmmm. Just bookmarked this for the next time we eat cauliflower. Just convinced my daughter (3 therefore logic is still fluid) that she since she like broccoli she will also like cauliflower.

You also may have made my favorite image of the day–if your brother-in-law eats the cauliflower in any way other than like a giant apple out of hand, I’m not sure I want to hear the truth.

Jennifer, you should be good! Cauliflower is just “white broccoli” after all…or at least it is for our 5 year old 😉

I love how just a few ingredients can transform cauliflower. Looks like I’ll be picking up a head at the farmers market this weekend, and maybe a copy of this book too! Thanks!

Wow, that makes me wish I had a large head of cauliflower in the fridge (as well as pine nuts and currents). I’m going to have to get the ingredients soon — and check out the cookbook, too.

That would be “currants.”

I am mad about cauliflower at the moment. It is so versatile, cheap and delicious. Indian, middle eastern, lovely gratins and soups too, even with pasta. Ottolenghi is a top bloke for a cauliflower recipe but this one sounds great too!

So perfect! Was just wondering what to do with the head of cauliflower that I got from my CSA the other day! And I can leave the sauce off for the kiddos!

Will you promise not to laugh if I say I just started salivating while reading this?

Oh Jenny once again you get to the heart of motherhood at every age – I know exactly what you mean. My heart ached while reading your post
I’m thinking some cooking with my girl might just be what we both need…

What a perfect title for a cauliflower dish that sounds so delicious, and a perfect post about how our days are just there. Sometimes something comes out of what looks like nothing, am I right? Loved this post today.

We’ve been getting a ton of cauliflower lately, this dish sounds perfect for trying out soon.

I agree that your brother-in-law and his cauliflower noshing habit require a post of their own!

I visit your website thinking I am coming here to find a recipe (which I am) but am reminded that one of my goals as a parent is to keep the conversation going with my kid–and these reminders are what keeps me coming back. Thank you!

You wrote something quite awhile ago about being glad the one thing you taught your girls is the importance of talking to you and your husband. I can’t find the post. Does this ring a bell?

Cauliflower is the most under-rate vegetable. Spice enlivens it, subtle flavour brings it to life and to me its just a beautiful blank canvas ready to absorb anything thrown it’s way – wonderful recipe!

I would love to try this, sadly I don’t think I could get the rest of my family on board. It looks beautiful though!

Isn’t it funny how sometimes the words flow so easily and other times you really just don’t have a story for the recipe? I struggle with that at times!

I love cauliflower, and this looks delicious. My MIL, a great cook, taught me this very simple recipe, too:
Steam cauliflower florets, with some sliced garlic, until tender (about 10-12 mins).
Dress with lemon juice, olive oil, Maldon sea salt flakes, and a sprinkle of chili pepper flakes.
It’s also good cold.

Sounds along the lines of the indo-chinese dish -cauliflower manchurian. This is a lighter version (not in terms of the oil obviously! but rather the dressing ).

This was truly awesome. Fried cauliflower is great, but the addition of the pine nuts/currants/parsley and the dressing took it to a whole new level. I saved a tiny bowl in the fridge, which I just ate cold -so good!

I made this over the weekend. I really liked it, is it bad to say that it might have bee even better before adding the dressing and toppings.

The Washington Post just had a fried cauliflower recipe with a lemon tahini sauce (http://projects.washingtonpost.com/recipes/2013/10/02/crisped-cauliflower-lemon-tahini-sauce/) It doesn’t have the blanching and flouring part – just dumping the cauliflower straight into the oil – and it was pretty darn good. I’m wondering if you tried it that way at all – does it even get better with the extra steps?

Tried this. Loved the vinaigrette, but cauliflower frying was WAY too much work. Love my roasted cauliflower ant time (from Bon appetite). Prep and walk away. Yum. Will use dressing on other stuff. Thanks!