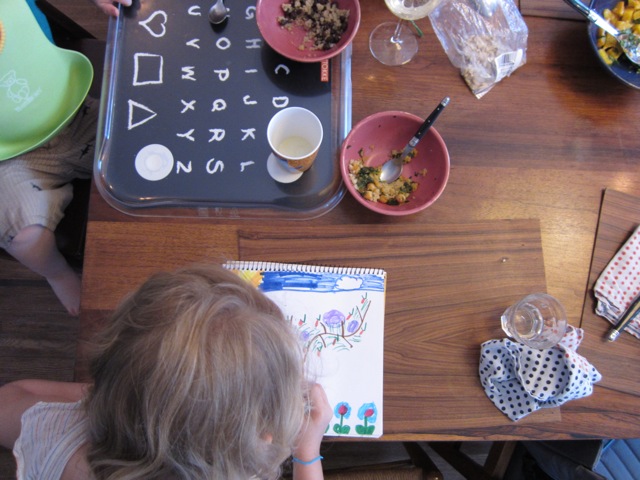 I’ve been a runner for over two decades now. That doesn’t mean I’ve been a runner consistently for two decades. Or that I’ve run marathons or get up early to run the Central Park loop every morning like my best friend and mother of three (including twins) has done for most of her adult life. Since I was a teenager, I have gone in and out of intense phases of jogging addiction — when I was 16, I remember deciding I would run four miles every day for the entire month of August. (Perhaps because my Central Park Loop friend had done it for the entire month of July.) The problem with that kind of regimen, of course, is that it’s not psychologically sustainable. Even for my younger psychologically-robust self. I can’t remember exactly, but it’s likely I didn’t lace up my Nikes for six months after reaching that July goal.

The same feast-or-famine scenario played out year after year until 1994 when my then-boyfriend, now-husband told me that he was going to come up with a realistic exercise plan for himself — to run every other day. Trying to do it every day was just setting himself up for failure. I remember the exact corner of Brooklyn where we were standing when he said this — Carroll and Smith Streets — probably because it was so unlike the pep talks I was reading in Mademoiselle (1994, remember?) about sticking with a fitness plan (“Grab a running buddy!” “Sleep in your sports bra so you’re ready to go first thing in the morning!”) that didn’t seem to address the bigger problem: How am I going to keep this up for the rest of my life? Andy’s strategy was the first to feel like real advice. It required no cockamamie scheming. No fancy head games or running partners or special gear. Like most of the best strategies, it was simple. And in the 15 years since — with the exception of two pregnancies — I’ve managed to (mostly) stick with the plan.

You know where I’m going, right? Take the pressure off. Don’t set yourself up for failure. Think about the long-term. No fancy gear or trickery. Sounds a lot like…hey, how about that?…Family Dinner. Simplify the routine and simplify the psychology behind the routine. It’s summer. With camp and later bedtimes and Tivo’d World Cup semis that demand your entire family’s presence in the TV room instead of the dinner table, allow yourself some nights off from the grind. Allow yourself to order in a pizza tonight if it means later in the week you’ll be excited to spin those vegetables into gold. Allow yourself a night where your son’s vegetable serving is the oregano on the Trader Joe’s frozen pizza. Chances are you’ll be more likely to stay in the race and go the distance.

BTW: Photo courtesy of DALS reader Cory J. of Brooklyn. The family dinner they are eating here is Curried chickpeas with spinach, a vegetarian adaptation of a DALS favorite. Thanks, Cory. Hope the kids enjoyed it!

I totally agree. I know I have to throw my kids a bone occasionally or they will revolt. And by taking a night off here and there, I don’t get burned out trying to feed them well. This site really has been inspirational for me giving me new things to try. In the last month alone, I’ve made the rigatoni with mushrooms, quack and cheese, smores pie (with a vegan, dairy-free rice creme that no one suspected!!!!), and waffle-iron grilled cheese 2x (they loved it!). Can’t wait for the cookbook. 🙂

here here! Last night was one of those nights where I was on SPD (Single Parent Duty) and I threw caution to the wind, ignored the meal planned for that night and turned to my freezer for dinner. I pulled out my emergency stash of Trader Joe’s frozen orange chicken. I think my son nearly fell off his chair with his newly discovered luck. No vegetables either, just chicken and some rice. And you know what? He will survive just fine.

I am starting to think we were separated at birth! Same running/jogging strategy..add to that I never run more than 1-2 miles. I have tried to challenge myself here and there. But I usually just go back to my routine of every other day or so.

Tonight it is tacos for all…then off to a concert for the grown-ups. I figure all the cheese, meat and veggies on a taco count as a real meal…and a quick escape for me!

Sweet! If pizza oregano is a veggie, we’re doing much better on that food pyramid than I thought!
I love this advice! Thanks!

Found you today after the Times article and just in time! I’ve got a toddler at home with another on the way and my husband and I keep saying we need a better dinner strategy. I look forward to reading all the past and future posts!

Great advice! We shouldn’t set ourselves up for failure, just give family dinner a try a couple of nights a week. Eat the same thing as your kids, sit down at the table with them, even if one partner’s not home. Think of it as a time to connect, not to hit any particular goal and all will enjoy more.