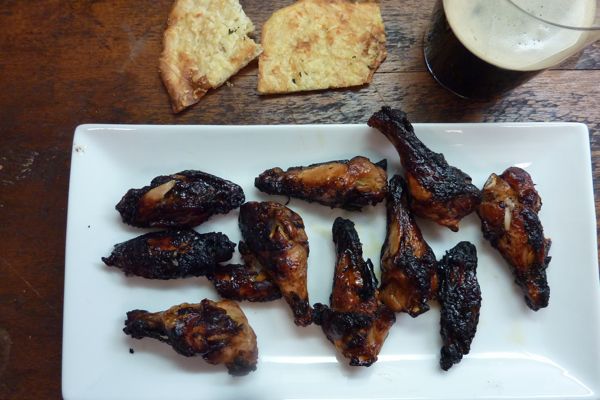 About fifteen years ago, Aunt Patty scribbled her recipe for chicken wings on an index card and clutched it into my hands with the urgent instruction Don’t Lose This. The way she said it and the way those wings tasted, I figured it was some secret family recipe that went back generations. I didn’t lose the recipe, but I never made the wings either. Somehow I had a sense that this was one of those things that wouldn’t have tasted the same had anyone else attempted to cook them for me. The title of the recipe was “La Brea Tar Pit Chicken Wings” so named because they were dark, sticky, and gooey and I had pretty much forgotten about them until a few weeks ago when I was flipping through my Gourmet Cookbook in search of a dinner we could eat with our fingers in front of the Super Bowl. Turns out Patty’s wings hadn’t quite earned the secret family recipe status I had conferred upon them all these years, because they were! Right there on page 55! (And submitted by some imposter in Boston named Metta Miller! What??) I felt a little better when I finally read the recipe and saw how easy it was, how perfect it was for the kind of meal I craved that night: minimal hands-on time, and something that worked equally well with chocolate milk and Guinness.

Chicken Wings
This is from The Gourmet Cookbook. It makes 48 wings, but for our Super Bowl dinner I halved it since it was only five of us. (The family plus Todd.) I added a few drumsticks to the mix, since Abby has never met a drumstick she didn’t propose to.

Put a rack in middle of oven and preheat oven to 400°F. Arrange wings in one layer in a roasting pan. Combine remaining ingredients in a small saucepan and heat over moderately low heat, stirring, until sugar is dissolved. Pour evenly over wings and drumsticks. Bake for 45 minutes. Turn chicken over and bake until sauce is thick and sticky, about 1 hour more. They are supposed to be dark and gooey, but start checking them at about 45 minutes so they don’t get more charred than you prefer.

I’ll have to try this recipe. I’m always looking for new ways to make chicken.

I make chicken wings with a recipe very similar to this, but I use vinegar instead of red wine (not much – not making buffalo wings; also, brown sugar and fish sauce), cook the wings naked for an hour, and then toss them in the sauce and serve them. I appreciate that you get that nice blackened, grill-look if you bake them in the sauce for an hour and forty-five minutes, but they’re so much easier if you toss the sauce on at the end. After an hour in the oven, the skin is nice and dry and crispy, and absorbs all of the sauce.

We’ve never made chicken wings! My brother in law owns a pub so we often end up there for finger foods like that, but this sounds great. I bet it would be awesome on thighs and drumsticks done on the BBQ.

Hey Jenny! Thanks for this recipe. I hate making chicken (ever since an 8th grade field trip to the Empire chicken factory, I have avoided handling raw poultry), but this was so easy, and so so delicious! I did drumsticks, and we devoured them. Thanks!

ah, what a beautiful sight. i had grand plans to make your classic barbecued chicken tonight (albeit in the oven), but now i’m waffling. what’s a girl to do?

i think i’ll go with this tonight, the barbecued next week. far be it from me to slight a chicken recipe.

We made these last night (using 8 drumsticks) and they were fantastic! My husband served them with french fries and steamed broccoli, but I think they’d be good along side a healthy dollop of macaroni salad. Thanks!

These looks delicious yet a breeze to prepare. Is it strictly calling for regular Sugar? Could Brown be substituted without harming the flavor?

Made this for the Butler game tonight. It was a hit! My Sis-n-law suggested that the sauce would be really good for kabobs… I agree. Gonna try that once this silly winter whiplash is over!

I just discovered chicken wings this year myself and it’s such a good dinner. I’ve had them with BBQ sauce. It was actually something I bought by mistake and turned out I wouldn’t them any other way. It’s one of my favorite meals now.