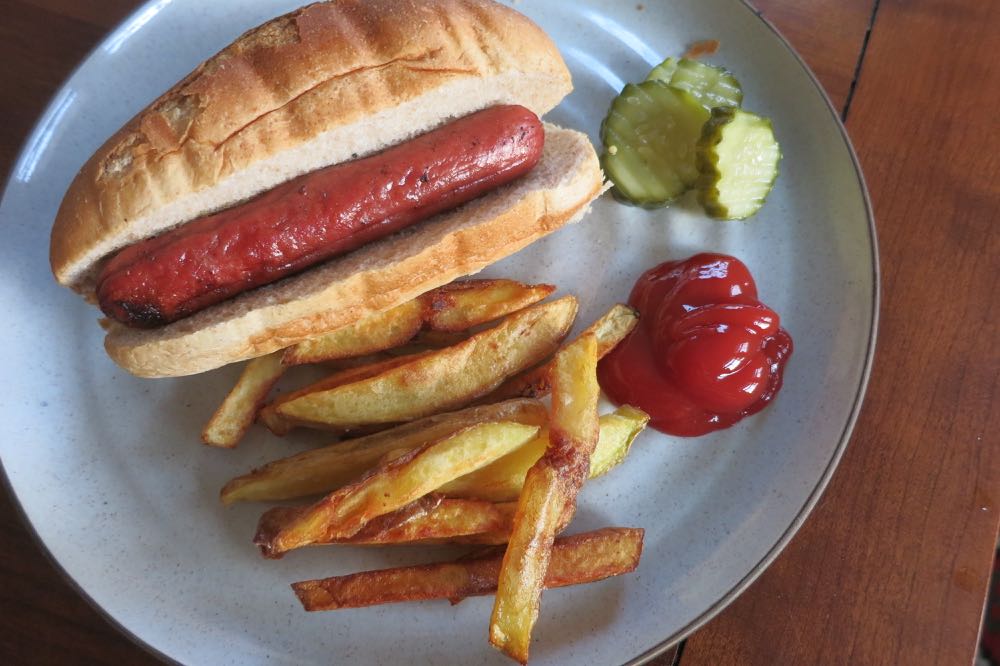 Every Friday, like clockwork, the text comes from the mom or dad of one of my 11-year-old’s friends. “The girls are asking for a sleepover. OK by me if OK by you!?”

I got this exact message from my friend Annie late Friday afternoon while Phoebe, Andy, and I were sitting on the grassy berm beside the school track where I sometimes run. I had just logged three miles after putting it off all day and felt good. I was psyched to go home, shower, drink an icy gin and tonic on the patio, and chill. We had been in a hundred different directions that week, and our Saturday and Sunday didn’t look any less busy, so I wanted all four of us home for dinner, a little breather before we ramped it up again.

I said no to the sleepover. First of all, if Abby has a 15-minute window, the kid finds a way to make a plan, so it’s not like she never sees her friends. Second of all, my daughters are 11 and 13, and it feels like any day I am going to lose them entirely on weekend nights, and I won’t even be in the position to say yes or no. Am I right, seasoned veterans/parents of teenagers out there?

So maybe that’s why when Abby requested French fries along with burgers and dogs, we decided we weren’t going to go with the healthy, homeworky baked russet kind of French fry. We were going to have real fries, gold and crispy, hot and salty, enticing enough to compete with any possible plan that teenagers will dream up for the next 400 Friday nights we have them under our watch.

Problem is, we don’t know how to make those kinds of fries.

“I think we can just use a Dutch Oven,” he told me as he cross-referenced a bunch of googled recipes.

“Doesn’t the oil have to be a specific temperature?” I asked. “We don’t have a thermometer.”

“Do we have the right oil?”

He’s always been much better at winging it than me.

Turns out making real fries — the fried kind of fries — is not very complicated. You don’t have to own a deep-fryer or a thermometer or possess any special knowledge beyond recognizing the look of a French fry when it’s done. Andy poured about an inch and a half of peanut oil into the big cast iron Dutch Oven, set it over medium heat, and sliced up some unpeeled Yukon golds while it heated. First he sliced them cross-wise (so he had seven or eight flat disks per potato), then lengthwise into matchsticks. He rinsed them, patted dry with paper towels, then dropped two or three into the oil to test the temperature. They sizzled like crazy before settling down a bit, then added the rest. After 15 minutes, he removed with a slotted spoon onto more paper towels, let the oil drain off, then salted them like the sea. 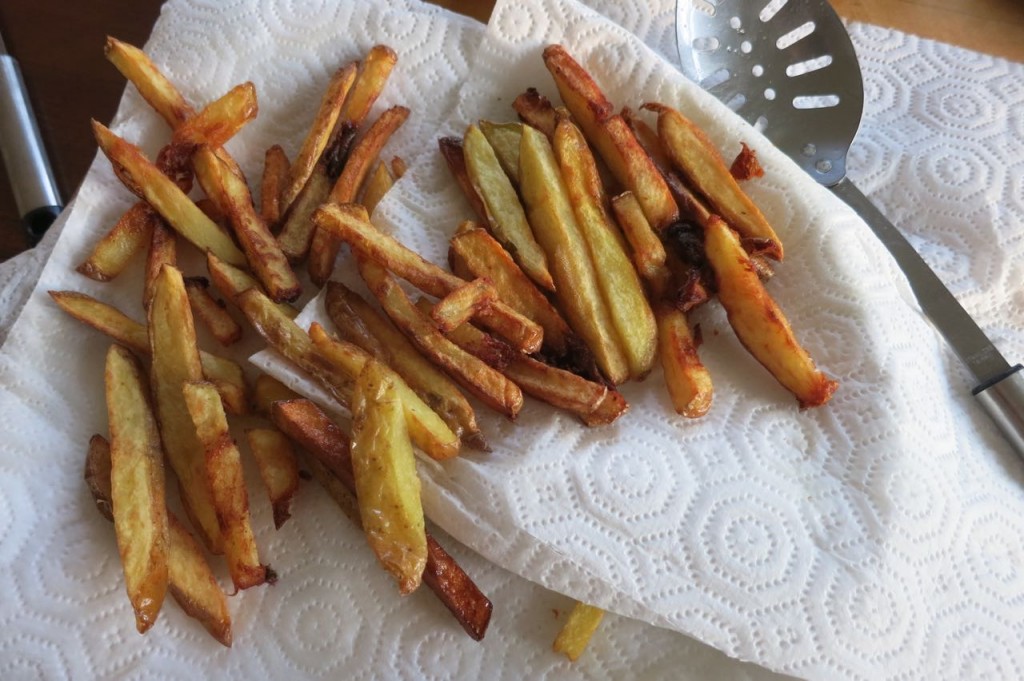 And it worked. “We should make these every Friday,” Abby said as soon as she tasted one, eyeballs wide.

I got no problem with that plan.

I agree. I don’t make them often enough. I don’t have a thermometer either. I use a Dutch oven also. That whole theory of frying them twice at different temperatures is a waste of time and extra messy. The way you made them is how I’ve always done it and they are perfect! Also, my daughters are 18 and 22 and those teenage years disappear in a blink. Enjoy every Friday that you can nab from them. 🙂

I think peanut oil is supposed to be the best for fries. I’m pretty sure I read somewhere that the fancy restaurants who serve chips jenga style use it. (or maybe use it twice?) Sounds yum.

what did you do with the oil after you used it? that’s my problem with deep frying anything (well, that and the health aspect)…all that oil! where to toss it? or do you re-use (ick!). I just don’t think i can go there….but my family is pretty happy with oven fries.

Working with teenagers I can tell you there is never a wrong time for French Fries. For myself either really.

This method I heard about on America’s Test Kitchen is the easiest! And the fries turn out really well. Also works for sweet potato fries. You can re-use the oil, they say up to three times for frying, but I use it for cooking also.

This brings back memories. My mother used to make homemade fries that looked EXACTLY like the ones pictured above, but I’ve always been too nervous to try them at home myself. You’ve given me some confidence to just go for it! And yes, they are delicious!

Same here-my mom’s fries used to look exactly like this!!! We had them pretty much every weekend with grilled burgers. She used gasp! Crisco! I think Canola would be just fine but never had to courage to make them.

Thanks a lot for sharing

We only eat French fries this way at home. And my son (who was 5 the first time I made them) calls them “potato French fries”. As if the frozen kind aren’t… They always remind me of my grandmother who fried everything growing up!

You are sooooo right! Keep them home while you can, you will NOT have any control over their schedules in the very near future. I constantly say to my hubby, or anyone who will listen, ‘remember the days where we’d wake up and say ‘what should we do today?’ (not sure if I got all my quotes right, probably not) Point is it only gets busier in middle and high school with sports, clubs, concerts, award ceremonies, banquets….sigh, and then they turn 18 and they’re going to prom, graduating ( I have a senior and prom was last night). So enjoy whatever freedom you have, no matter how small…

what a sweet post. you guys are the nicest parents. xo

Cute story! Good for you for saying no to the sleepover – my niece is only 10 and she already is started to ask to bring a friend to family events that my husband and I host. What? No! Btw your blog post title reminds me of “Stir Friday” from Archer, ha! Anyone else watch that show? So bad, but so good! – Charlie, http://www.lemonbutterlove.com

We are fortunate that our kids, even our teens, are home most weekend nights and we take full advantage of that! Nothing better than a family meal and going to bed knowing all of us are under the same roof- it goes by too fast and I know it is something I will deeply miss when my oldest goes to college… fries look great, but as another commenter asked…what do you do with all the leftover oil??!

You might want to try homemade potato chips, too, if you haven’t before. Make them exactly the same way; a mandoline helps with slicing the potato thin, but if you don’t have one, a good knife will do. Sweet potato chips are wonderful homemade, too. Whenever we make them, it makes me never want to go back to store-bought again.

I actually purchased a little deep fat fryer, they are cheap! I love real fries and its worth the extra calories to have them occaisonally

You have the incredible gift of hitting just what I feel as a mom to a 12, 9, and 6 year old
Times are changing – it’s not the little kid days anymore
And I want to hold them close for as long as I can!

Fries are my week spot. Anytime, any day. Today is my 28th birthday and I think this girl needs some stinking FRENCH FRIES! #makedinnernotwar

These looks delish! I’ve made the shoestring variety in this way, cutting them thin, and soaking them in cold water first to draw out the starch. So good. #makedinnernotwar

Ooooo, I could eat these every Friday too! #makedinnernotwar

I’d love to try making these! Thanks for sharing. #makedinnernotwar

I’ll give you a partially true on the teenager part. Lives get really busy when your kids are teenagers and there are some things you have no control over – late nights doing homework, away games in the middle of the week, the teacher who thinks it’s a good idea to assign a paper on Monday that’s due on Wednesday. That being said, as parents we always have veto power and even our 21 year old will ask politely before making plans that would have him miss dinner.

This weekend we have SATs, a championship track meet, a night at his job for the middle son (all of this on Saturday), and finally, studying for final exams which start on Monday. Tonight, however, we’ll all sit down to dinner together and be grateful for it before going to bed early.

Nice …….. I agree. I don’t make them often enough. I don’t have a thermometer either. I use a Dutch oven also. That whole theory of frying them twice at different temperatures is a waste of time and extra messy. The way you made them is how I’ve always done it and they are perfect! Also, my daughters are 18 and 22 and those teenage years disappear in a blink. Enjoy every Friday that you can nab from them

I love peanuts…….. I think peanut oil is supposed to be the best for fries. I’m pretty sure I read somewhere that the fancy restaurants who serve chips jenga style use it. (or maybe use it twice?) Sounds yum.

Good…… This method I heard about on America’s Test Kitchen is the easiest! And the fries turn out really well. Also works for sweet potato fries. You can re-use the oil, they say up to three times for frying, but I use it for cooking also.

Yes….. Same here-my mom’s fries used to look exactly like this!!! We had them pretty much every weekend with grilled burgers. She used gasp! Crisco! I think Canola would be just fine but never had to courage to make them.

Anything you can say YES to while raising teenagers is a good thing–helps to balance out the many more NOs that are ahead. And French fries are a good thing. So are warm baked brownies as a surprise when they get home. Nobody outgrows that!

French fries is so delicious ididnt know they made of potatoes.Igrew up in country side where potatoes were grown in plenty.

Loved the french fries i can have all through. Thanks for this

This same thing just happened to me (before I saw this post)! I was craving french fries-the real McCoy, and decided to just wing it. It turns out it really is as easy as chopping the yukons and putting them in a bit of oil. Since I’m only cooking for one, I can really keep the portions small. Now, might I suggest a sprinkle of truffle salt and a dipping sauce made from pesto and a tiny spoonful of mayonnaise? Heaven.

hope my doctor will not find out about this after i eat it:))