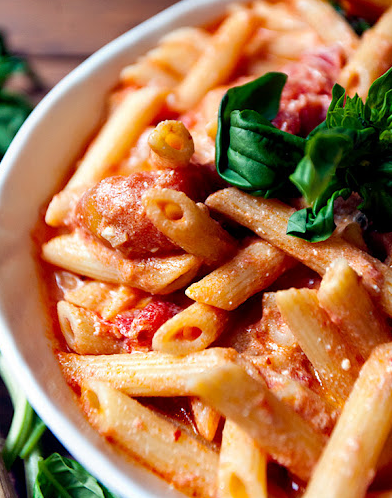 Are you guys following Joanna’s cooking series over at Cup of Jo? She’s 33, mother to a 1-year-old, and sick of not knowing how to cook. So in her words, her plan is “to try to master–really master–the classic recipes: scrambled eggs, mac n’ cheese, tomato soup, chocolate chip cookies, that kind of thing.”  Each week she’s highlighting a new recipe courtesy of her favorite food bloggers. This week The Wednesday Chef weighed in with “the best tomato sauce you’ll ever have” which does indeed look as though it lives up to its name.

Here are a few other things I’m excited about this week.

The new Everyday Food video series on youtube. Editor Sarah Carey makes dinners in (almost) real time. How easy does this this one look?

Jennifer Steinhauer’s ambitious attempt at recreating hostess cupcakes, Twinkies, and ho-hos in “It’s Not Junk if I Made it.“

How many times have I announced to the girls that we are embarking on a baking project only to find myself abandoned in the kitchen as soon as something more interesting comes along? The upside, as Melissa Clark points out in her Hamantaschen story, is that when you’re in charge, at least “the cookies turn out very very good.”

Am I the last to know about this super simple starter? I think I’ll make it for my friends coming over for dinner tomorrow.

Those of you following DALS on twitter know this already, but Bon App’s hoisin meatloaf was every bit as satisfying for last week’s Sunday dinner as I had hoped it would be.

“Whether anybody was home meant everything to a house. It was more than a major fact. It was the only fact.”

And, on the next page: “And if you sat at the dinner table long enough, whether in punishment or in refusal or simply in boredom, you never stopped sitting there. Some part of you sat there all your life.”

LOVE the last quote…. thank you for all of these fab links too. Lined ’em up for weekend reading/inspiration!

Oh my goodness, that meatloaf. Hello!

loving Joanna’s series too. the best egg sandwich was a winner, and i might try the best chocolate ice cream this weekend. mmm.

Hoisin meatloaf? I am SO THERE!

Love Everyday Food! Very excited to check that out. And I didn’t know about that feta thingy either, that sounds soooo great.

I JUST made that pasta last night. It was as amazing as it sounds. Maybe better. And thank you for those wonderful book quotes. How inspiring.

Wow. I love those quotes from the Corrections. Have you read Freedom yet? If not I highly recommend it.

Have a good one!
btw, left you a thank you note here http://www.dinneralovestory.com/fettucini-with-sauteed-brussels-sprouts/
🙂

MMMmmm thanks for all the yummy pointings. I am definitely heading over to see what that hoisen meatloaf is all about.

I love these Friday/weekend posts! Thanks for the link to those Everyday videos. I will probably give a few of those a try this week!

thank you so much, jenny!! was catching up on blog reading tonite and so happy and honored to see this, thank you!!! :):)