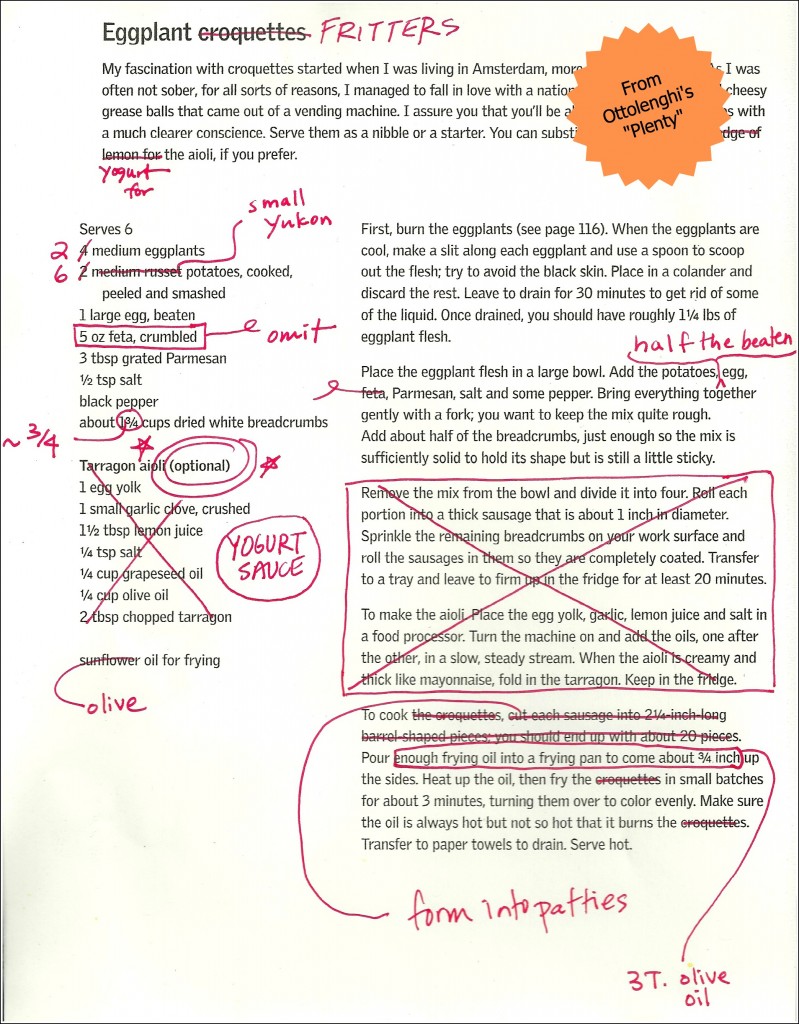 When I was first learning how to cook — which is another way of saying “When I was first plowing my way through The Silver Palate Cookbook in 1994″ — I remember coming across a recipe for an Avocado Dip that called for a cup of homemade mayonnaise. Homemade mayonnaise? Did such a thing even exist? Apparently it did — the ingredient list bumped me to page 339 where I could whirl a few eggs with oil and come up with something that promised to be both “luscious and versatile.” Maybe for other people. For me, a beginner, it just promised to be intimidating. I skipped the homemade mayonnaise. And, get this, I also skipped the Avocado dip. Obviously I couldn’t make the dip if I was only using regular old Hellmann’s. Recipes were recipes and you didn’t f#@k with them.

Fast forward twenty years (are you freaking kidding me by the way? 20 years!) to last Friday. I found myself in the possession of two beautiful eggplants, which, being married to Andy, was a surprising place to find myself. For him (OK for me, too, I’ll admit it) an eggplant falls into the category of Thing That I Would Probably Not Choose to Cook, but Would Eat if it’s in Front of Me. Well, on Friday, they were in front of me — right there in the CSA box nestled in with the corn, tomatoes, sage, carrots, and beets.

So what to do first? I did what any self-respecting CSA member would do — I pulled Plenty from my cookbook shelves, possibly the most inspirational vegetarian cookbook that exists in the world. The cover featured eggplants drizzled with a buttermilk dressing and bejeweled with pomegranates. I knew my kids wouldn’t go for that, but maybe Ottolenghi had some other ideas for me? Something where maybe I didn’t have to tell my kids that they were actually eating eggplant? I flipped to “The Mighty Eggplant” section…there was the cover recipe, then Soba Noodles with Mango and Eggplant, then Lentils with Broiled Eggplant, then Eggplant Tricolore, then…oh my God, jackpot: 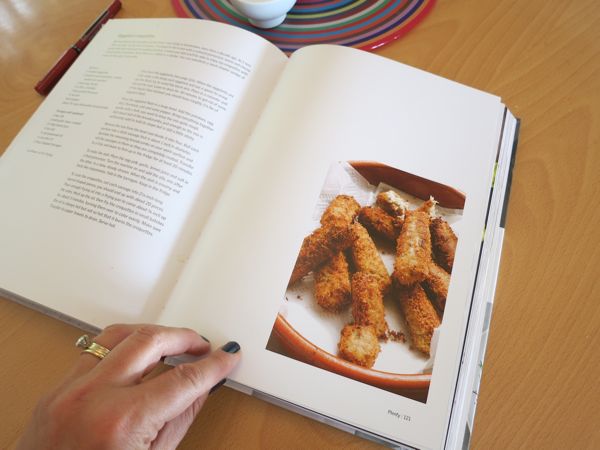 Other than turning something into pizza, there is no more foolproof strategy for marketing a potentially offensive food to kid than turning it into a golden-fried, handheld, dip-able, glorified mozzarella stick. (At least none that I can think of.) I scanned the recipe…hmmm, russet potatoes, don’t have those. Feta, darn, just ran out yesterday. Tarragon aioli? Homemade? (1994 flashback!) That was not going to happen.  Neither was the chilling in the fridge for “at least 20 minutes.”

In other words, the recipe was perfect!

I had some Yukon golds, which are generally not as fluffy as russets — I knew that — and I had Parm, which wouldn’t quite be feta, and, just by dumb luck, Blue Hill Farm had sent me a sampler of their brand new savory yogurts* (tomato, squash, carrot, and beet), one of which (tomato) I figured would be an excellent stand-in for the aioli. Other adjustments I made along the way: Instead of shaping the mixture into sticks, I shaped them into patties — a decision that was validated when Abby spied them frying in the pan and cheered “Are we having latkes tonight???” (Um, yeah, totally.) I was not in the possession of sunflower oil for the deep frying — pretty sure I never have been in my entire life — and so I used 3 tablespoons of olive oil for regular old pan-frying.

And the result? They were kind of genius. Not Ottolenghi genius, but On-the-Fly genius. Vegetarian, nothing wasted, kids ate it up, and, when served with roasted carrots tossed with sage and carrot yogurt and a classic tomato-corn salad the whole thing was the perfect Friday night dinner. I think my 1994 self would have been impressed. 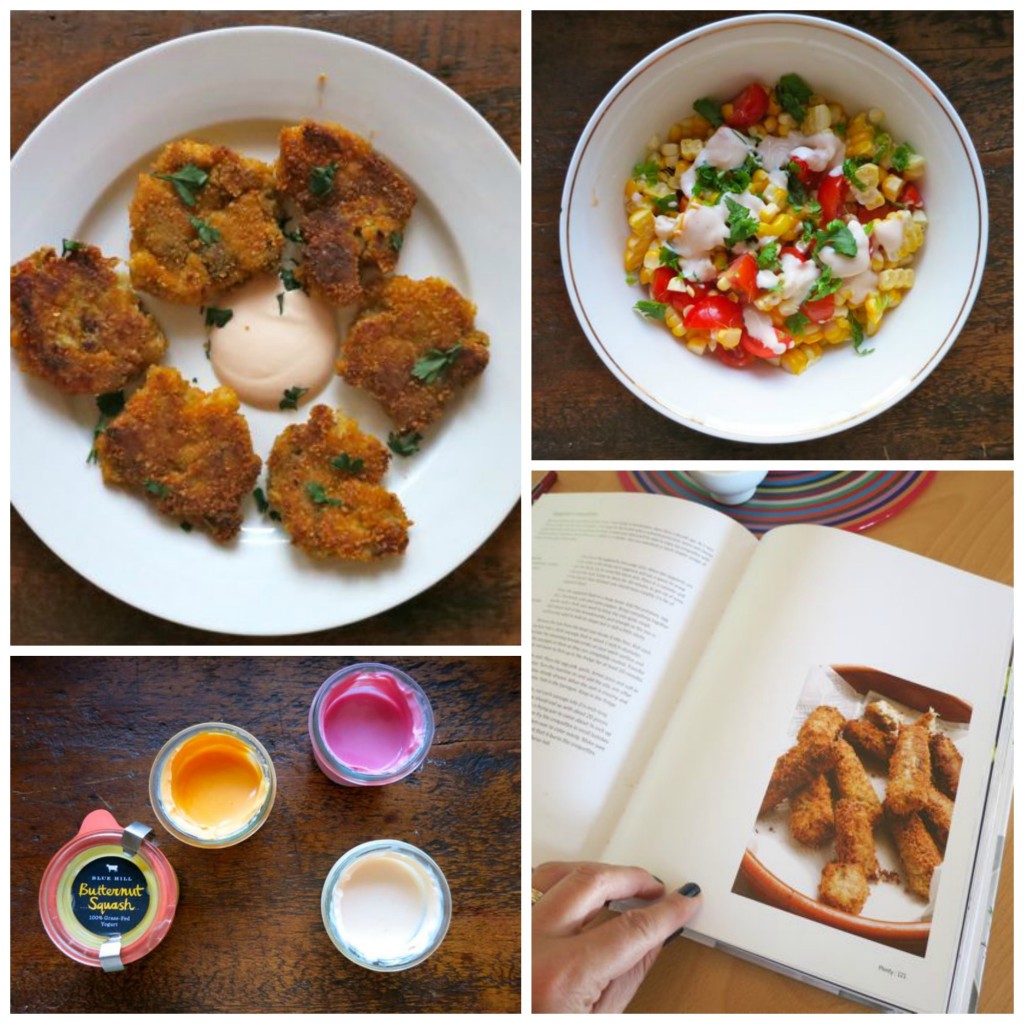 Clockwise from top left: The eggplant fritters with tomato-yogurt dip; tomato-corn salad with cilantro and tomato yogurt; a photo of the Eggplant Croquettes in Plenty the way they were supposed to look before I decimated the poor recipe; savory yogurts (squash, carrot, beet, tomato) new from Blue Hill Farm.

*Editorial disclaimer: Samples get sent to me all the time, but that does not mean I always write about them. I only ever write about products that have a real use in my kitchen.

I don’t know why I have been holding off getting Plenty, and the other two cookbooks they have, but I have just put them in my cart on Amazon! The fritters look yummy even if they don’t look like the book. Those savory yogurts look really yummy as well!

I had to laugh at this because I was just having the same conversation with my sister. She wanted to make a lasagna but didn’t have nutmeg and called me to ask if I thought the recipe would still turn out OK if she skipped it. I was like that once too. I think we all were and it’s how we learn to cook!!! 🙂

my husband is in the anti-eggplant category, but really, what does he know? i think your “fry it and trick ’em” tactic would work on him (and the boy!) with this idea.

I had never bought sunflower oil either, but they now sell it at Trader Joes! It is mild tasting, has a high smoke point and is now in my cabinet for popcorn making!

I’m with Reynaul….why oh why do I not own Plenty? Well, that would be because of my meat and potato husband…

Those fritters look perfect! Yours and the ones in the book 🙂

The thing about Plenty is that it’s not necessarily a “Vegetarian” cookbook. It’s more like a Vegetable cookbook if that makes sense. Ottolenghi himself is not a vegetarian. He just loves them, and the recipes in this book are incredibly inspiring. You should definitely own a copy! I don’t own Jerusalem yet, but that’s next up on the wish list.

This is very impressive and something that constantly stops me from cooking many recipes – I’m out of this, I don’t have this, no food processor to puree this – etc, etc.
And my family basically hates so many vegetables, it’s hard to do anything with them. This is perfect, thanks for sharing 🙂

If you ever do get around to making the roasted eggplant with buttermilk yogurt sauce, it is divine. Highly recommend!

Eggplant Parmasean is also great on a bed of spaghetti or on a roll for your pasta hater. I was in college before I realized what was actually in it!

Love your approach! I do this all the time: read he recipe, then adjust for what I have or don’t have on hand. It’s all about inspiration and whatever works for you and your family!
Love your blog, it always brings a smile to my face reading about your family’s antics! Keep it up!

I love Ottolenghi, but dear god in heaven, his recipes are fussy. Glorious, but fussy. It makes me so happy to see cooks I respect a lot decimate them to good effect! By the way, the eggplant-soba-mango salad is so delicious. You could probably get it past your eggplant skeptics. And while the tomatoes are still in season, the tomato party with multicolored tomatoes and two kinds of couscous is terrific (and you can totally wing it with whatever fresh herbs you have around).

I second the recommendation for the mango eggplant soba salad – it’s delicious – and vegan and gluten free if the buckwheat noodles are the genuine article! Jerusalem is excellent too – the spinach and date salad is amazing.

It’s so easy to relate to your dilemma – too many recipes are made too complex! Often times I start with the key ingredient e.g. chicken and then look for inspiration from recipes and finally create my own (usually shortcut) version with the rest of the ingredients I happen to have. I find eggplant tricky to cook, it can have such bitterness, get too rubbery or too soft. Your recipe sounds simple and tasty for the whole family, thanks for the idea!

I’ve recently been converted to eggplant by one of the recipes you skipped over in Plenty-the soba noodles with mango and eggplant. I think I’m the third reader to say this! They are astonishingly good-but I’ll try the eggplant croquettes next-thank you!

I do actually cook most Ottolenghi recipes as written but ONLY because they are amazing. But your marked up version made me laugh!

I am always amazed/ delighted to find an Ottolenghi that can be cooked in less than 30 minutes without insane amounts of prep. Just as well they are brilliant recipes because the work involved can be quite offputting (and I say that as someone who loves prep). But there is no one like him for innovation and amazing flavours (another big YES vote for the aubergine/ mango/ soba sald – it is gorgeous)

Here’s another one:
Slice eggplant.
Dip slices in milk, then in flour.
Deep fry.
It’s delicious.

Good recipe, but here is an easy one: grill eggplant and peel skin off, mix your mushy eggplant with a dash of soy sauce and scrambled eggs. Fry. Its like an eggplant scramble. Serve with a squeeze of lemon.

I absolutely love this concept and try to use it in my kitchen as much as possible.

I encounter people all the time who are intimidated by recipes or feel the need to follow things to a “t.” Its so refreshing to see you take this and make it completely your own!

Another favorite of mine is the “use what I have” or “what can I make with some random ingredients”? It always turns out delicious and really fun!

Thank you for sharing this; have been getting lots of eggplant from our CSA – and still have two left after making breaded eggplant over the weekend before I ran out of steam.

I am going to give this a try tonight.

Ha, this is great, and I loved the visual diagram!