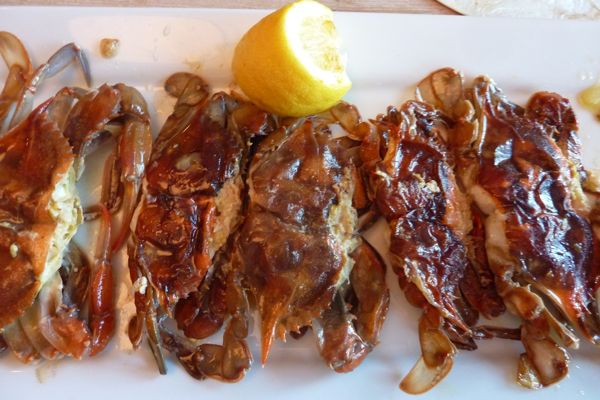 For a good long stretch, when the girls were little, Finding Nemo was in the DVD 24/7 and quickly became the Annie Hall of my 30s — it seemed as though I couldn’t go a day without quoting Marlin the Clownfish or Bruce the Great White, who belly-belted the titular line of this post (you recognized it, right?) before attempting to gobble up Marlin and the lovably loopy Dory. It’s nearly impossible for me to watch a Pixar movie (particularly Nemo, Monsters Inc and The Incredibles) without asking myself at the end What am I doing with my life? And why can’t I be John Lasseter? 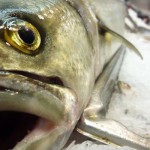 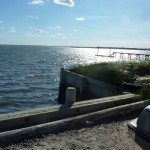 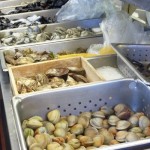 In the meantime I can be content with the fact that Pixar and Nemo and Co launched an underwater obsession with Phoebe that still lasts to this day. She’s been to a half dozen aquariums up and down the Atlantic coast and once even emptied her piggy bank to donate to a favorite, the South Carolina Aquarium. “Please use this money to help take care of your sharks,” she wrote to the director. The letter she received back, acknowledging the $30 donation for tax purposes, still hangs on her bulletin board. 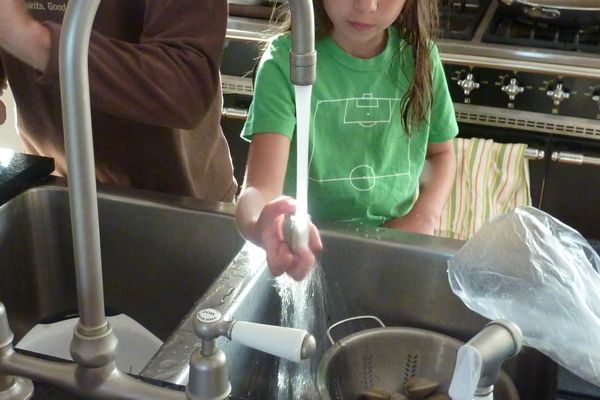 For now, though, all her love for sea life seems to be translating to consumption as opposed to conservation — give her time…she’s seen Wall-E once and was only six. One of her favorite activities is going to a seafood market and picking out a new kind of fish to try. Last weekend, while we were staying at my sister’s house, we went to her idea of Disneyland: A Long Island seafood purveyor who might as well have reeled in the catch right to our shopping bag, it was so fresh. (That view of the bay up there is the store’s “backyard.”) With a little encouragement to go local — easy at a place like this — Phoebe pointed at the soft-shell crabs and two dozen lovely little Little Necks, which she and Andy cleaned and prepared together back at the house. 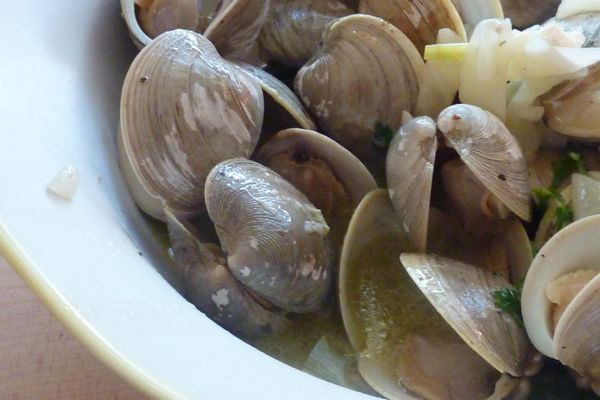 In a large stock pot, set over medium heat, add three tablespoons olive oil. Add half a chopped onion, 1 clove of minced garlic, and a few shakes of red pepper flakes. Sautee for a while until the onions are soft, about 5 minutes. Add 1/2 cup of white wine and 2 dozen clams. Bring to a boil, then quickly turn down heat to medium-low so it’s simmering, and cover. Starting at five minutes, check inside the pot every minute or so to see if the shells have opened. (There will always be one or two that don’t and they should be discarded.) Dump into a bowl along with all the juices. Add handful of parsley. Serve with bread for sopping. Important: You won’t need to add any salt to this recipe — the clams are briny enough without it. 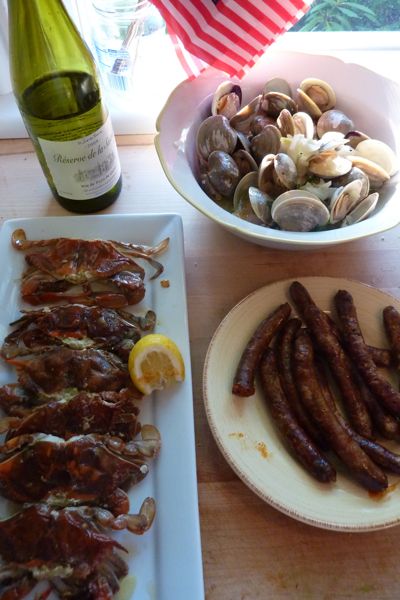 Add two or three tablespoons olive oil to a large frying pan. Add two cloves of garlic (minced) and some freshly ground pepper (no salt). Add six soft-shell crabs and saute 3 to 4 minutes a side until they have a nice pinkish-red color. Squeeze half a lemon into the pan, then serve on a platter as shown. Drizzle the pan sauce on top.

What’s that sausage in the photo? Grilled merguez, a delicious contribution to the menu by my brother-in-law’s niece, Claire. We also had my sister’s super fresh arugula and tomato salad, and some whole wheat couscous that had been tossed with caramelized onions.

This is perfection. This could be my “last meal.” I’d for sure make hot dogs for the kids (and my wife if I could get away with it) so I wouldn’t have to share this!

This is my idea of heaven.