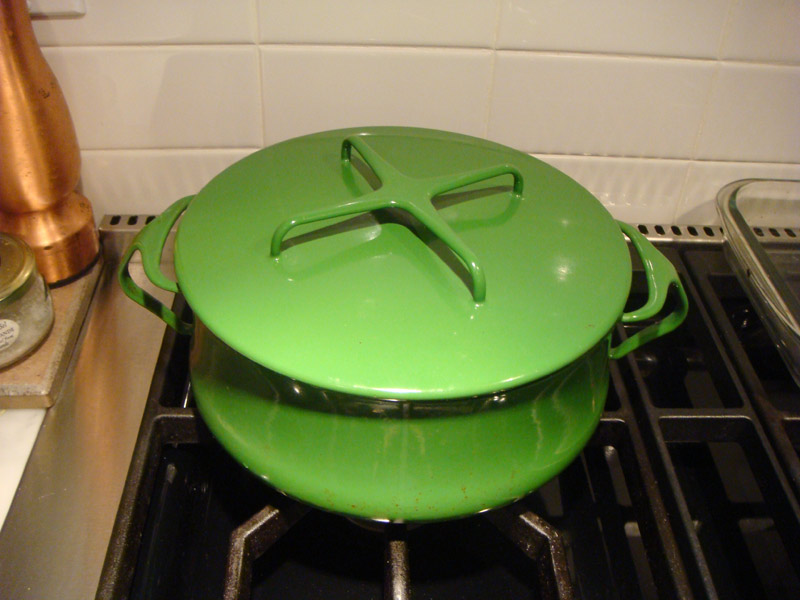 For a good part of my life, my mother made dinner using her three-quart mustard yellow Dansk enamelware frying pan. To her, no other cookware could compare. It browned meat beautifully, it was responsive to heating and cooling, it moved from stove top to oven easily. Even when its signature wooden handle fell off in the mid-80s and she couldn’t find a new one to replace it, she continued to use the pan. (But at that point, transferring it from stove top to oven became a more precarious proposition, involving fast hands and elaborate layers of dish towels wrapped around its rim.) It wasn’t until a full decade later that the stalwart of the kitchen was retired. So you can only imagine how happy I was when, scavenging around on eBay, I found the very same one in the very same color for $10. I gave it to her for Mother’s Day and bought myself a little something, too. This green one lives on my burner because I use it almost every day (for marinaras, soups, pastas) and because it reminds me of my victory.

how am i only now just seeing this? that green might be the best color they made. (tho the yellow and light blue are nice, too.) my mom gave me her full collection, but–because they were only ever special-occasion pots (her christmas eve lasagna, manicotti, and jumbalaya)–i can’t bring myself to actually use them. if you tell me they’re easy to clean, and comparable to the le crueset, i’ll be all over it, tho.

It’s so funny, isn’t it, how evocative these things can be? My mother was an excellent cook but the one thing I wanted from her kitchen was her 1960’s orange Le Creuset Dutch oven (from before Le Creuset was cool. ha ha! Was there ever such a time?!). I love it for all the reasons you mention. I’m glad I’m not the only one!