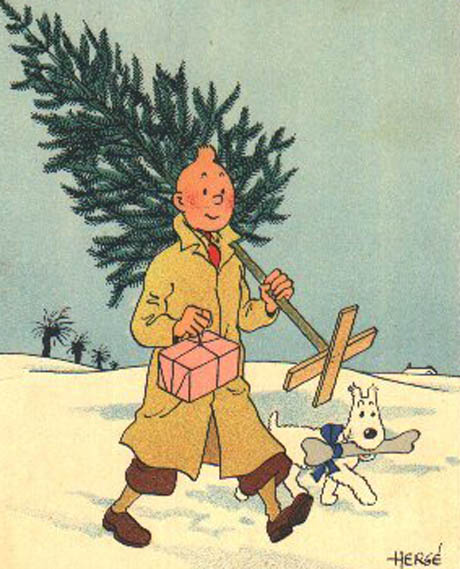 A few months ago, when we took the girls to see Rango, we settled back in our seats with some popcorn to watch the movie preview marathon. (They’ve gotten  longer, haven’t they?) It was all the usual stuff — Chipmunks and Gnomes, nothing terribly exciting — and then, suddenly, a huge ship plowing through a dark sea. On the side of the ship was written the word UNICORN and I heard Phoebe gasp. TINTIN! She screamed, then shrank back down in her seat when she saw that it wasn’t coming out until December 2011 — an eternity from then. I don’t know how I’m going to wait that long, she kept saying after the movie and seemingly every night at the dinner table since. It’s going to be torture. Phoebe has had a love affair with the adventure stories of the Belgian boy-sleuth, and his sidekick wire fox terrier, Snowy, since we handed her all eighteen volumes back in 2008. For her, waiting for this movie to come out has been much harder than waiting for Christmas morning. (But it’s been great fun for us — nothing makes me happier than watching kids build up their patience muscles, since it seems there are so few opportunities left to do so.) But now she only has to wait a few more days — it’s Number One on our Holiday Break To-Do, To-See, To-Read, To-Cook List. In case we don’t have time to weigh in next week, we thought we’d share the rest of the list, too.

1. See Tintin (and The Muppet Movie if we can swing it.)
2. Make a paella. (Recipe to come, but my friend Jen from Martha Stewart said she threw a few shrimp into this one and it was simple.)
3. Steam a few lobsters on New Year’s Eve.
4. Sit down to my mother-in-law’s Cranberry-Port Marinated Tenderloin.
5. Read Haruki Murakami’s IQ84 (after I finish Art of Fielding for book club).
6. Catch up on Homeland — I believe we are the last people on earth to watch this series.
7. Read this and this with the girls, if Santa honors their requests.
8. Download every single one of these “Apps to Keep Kids Happy” for our looong drive down south.
9. Organize the basement.
10. Throw back a Clover Club Fizz at Husk!
11. Dig into some of the Jasper Hill Farm Bayley Hazel Blue cheese that Andy’s colleague (who is from Vermont, and knows from cheese) was kind enough to give him for Christmas.
12. And listen to this as we eat said cheese.
13. Read an advance copy of Katherine Boo’s first — and, by all accounts, amazing — book, Behind the Beautiful Forevers.
14. Indulge obsessive compulsive tendencies by assembling Harry Potter Lego stuff.
15. Take one for the team, and pretend to have fun while doing a little ice skating.
16. Eat.
17. Nap while watching a football game.
18. Encourage kids to have some Christmas cookies for breakfast. And then join them in eating Christmas cookies for breakfast.
19. Gain about 17 pounds.
20. Make some resolutions (#1: eat less).

As for #9…the folks here at Busy Bee Organizing would love to help. In the words of Mary Poppins, “in every job that must be done there is an element of fun”! Offering a complimentary day of organizing!

You’ll love homeland – I’m happy to say that we caught up only a couple of days after the finale. We actually subscribe to Showtime every year from Sept-Dec just for Dexter and, now, Homeland.

I will be all over some of those iPad apps. We only have a 3 hour car trip planned (back and forth in the same day, no less) but I think some of those will come in handy!

I second #12!! That Ella Christmas album is the BEST!! Only Vince Guaraldi’s “A Charlie Brown Christmas” is even in the same league. These days when every pop-tart of the week puts out a holiday album, it’s fabulous to listen to jazzy, auto-tune free, swinging Christmas music. I have to admit, I’ll listen to both of those albums until well in to January!

i am SO excited for tin tin! we used to read the books when we were little, and the preview makes the movie look so exciting! the muppet movie is also definitely worth watching, both for the kids and the grownups, who actually remember the muppet show 🙂

I love this list. We love Tintin, have two more of the books under the tree and plan on going to the movie over break. And the muppets (although that might take bribing if you can believe it).

You are not the only ones who haven’t seen Homeland – I now HAVE to start.

I may also steal your Paella idea – though do that for New Year’s early with the kids (my 6 yr old loves mussels, go figure).

I also plan to gain 17 pounds and am about halfway there since the beginning of December.

And maybe I’ll read something The Whole Brain Child and The New Yorker, like the new Jeffery Eugenides that I’m trying to not gift away.

Hi- I just wanted to let you know that I got my copy of “pulphead” by john jeremiah sullivan just in time for the holidays and I love it! that’s one copy sold that can be completely attributed to DALS. merry christmas!

I won tickets to an advance screening of TinTin & it is amazing, you’ll love it!!

My husband and I are going to indulge with lobsters and champagne butter on NYE. Thank you for the great idea!

Our son is getting The Invention of Hugo Cabret and Wonderstruck – thanks to your recco’s! We’re so thankful to have a voracious young reader on our hands 🙂

Tintin is on our list too, as is Hugo. And I’m hoping I get a chance to read the biography of Cleopatra that I received LAST Christmas. And Harry Potter LEGOS will figure prominently, too, based on the gift wrapping I just did and the intelligence I’ve received from the in-laws (YOU GOT THEM HOGWARTS??? HOLY COW!”) Happy New Year and safe travels. And thanks for all the great recipes. You guys rock.

Thanks for all the fun posts all year, you two! They’ve brightened many a day and many a meal around here!

Nice! Love the Tintin christmas drawing! Great find! I want to see the movie too. Hope you guys enjoy it!

Thank you for writing DALS, this awesome and inspiring blog that is about so much more than just food, and may 2012 bring only good things!

All the best from Uruguay,
Julia

5. Read Haruki Murakami’s IQ84 (after I finish Art of Fielding for book club).

YES! 1Q84 is outstanding! I’m reading it right now for my December Book of the Month! Feel free to stop by and comment! Final reviews will be posted on January 3!

Love this site and your writing…wish the hubs would share a blog with me, so when I go days(maybe weeks) without writing…he could step in.

Hello from Ireland. Just a note to say that I ADORE your blog + writing…you have me in stitches with some of your posts. Love the candor. Stumbled upon you via Saveur’s ‘Sites We Love’ where another blogger listed you as a favourite. Look forward to following along! Imen x
Oh, I used to live in Brooklyn Heights as well.

Earlier this year I found your blog and it’s given me many hours of enjoyment and discovery. Thanks for that. All the best to you both in 2012! Cheers from Calgary, AB, Canada.

I first loved your blog for all the family meal/recipe ideas – but I was so pleasantly surprised to see the amazing reading traditions you’ve passed on to your kids! Beautiful & inspiring! 🙂

My family requested Paella so like I now do for all new recipes, I did a search for “DALS, Paella” and found this page. While you promise to provide a link later for Paella 🙂 I couldn’t find any DALS paella recipe, so I made the Martha Stewart one you mention. It was so good and so easy. Everyone loved it. I added shrimp as well.