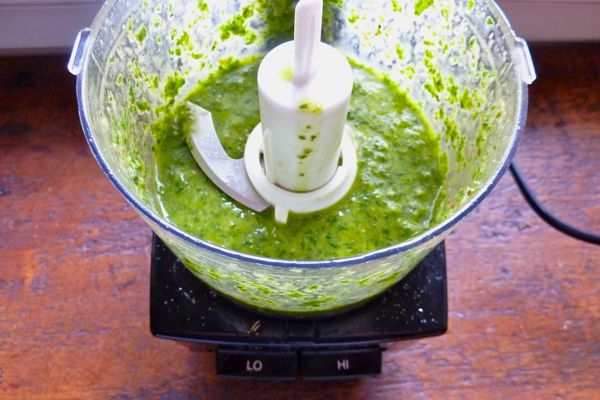 I’m going to keep this simple. Because I made it twenty minutes ago, and Jenny and I both said, “Why haven’t we written about this on DALS yet? It’s so easy.” So here it is, a good five-minute sauce that goes with just about anything. It’s awesome with grilled stuff, from fish (we had it last weekend with striped bass) to chicken to steak to lamb chops. It makes veggies better, from corn salads to fresh tomatoes to roasted potatoes. It’s good on toast, or grilled bread. You can even mix it into scrambled eggs. It’s a pretty simple formula and you can improvise within it, if you’d like — using, say, cilantro instead of the more traditional parsley or, even, if you’re feeling crazy and lamb is on the menu, mint. It’s basically a salsa verde, but what the version I make is a distant, less refined cousin. Our kids called it green sauce, and they don’t know it contains one anchovy. If that bothers you, too, you could leave it out, but I promise: even though you won’t taste it, you’ll miss it if it’s gone. — Andy

Process all ingredients except oil in a mini food processor or blender. Then, slowly add olive oil as you whirl and  the sauce emulsifies. Remove to a small dish and spoon over fish. Or chicken. Or meat. Or veggies.

Thanks for the great recipe. Tons of parsley in the garden. Might try over some pasta and grilled ship for the kids tonight. They always love a new addition.

In some parts of the world this is called, chimichurri. But you knew that. LOVE this sauce. Freezes well, too. Thanks.

Now I know what to do with the parsley that is going nuts in my garden. Thanks!

I love a good bastardized sauce. And anchovy. And tossing of capers. What I’m trying to say is that this is my kind of wonderful.

It will soon be had on fish. Or chicken. Or meat. Or veggies.

Hi Andy – You guys had a green sauce with the grilled haloumi post too. Which do you prefer? The addition of anchovy to this one is tempting. I think I might like it better, but haven’t tried it yet.