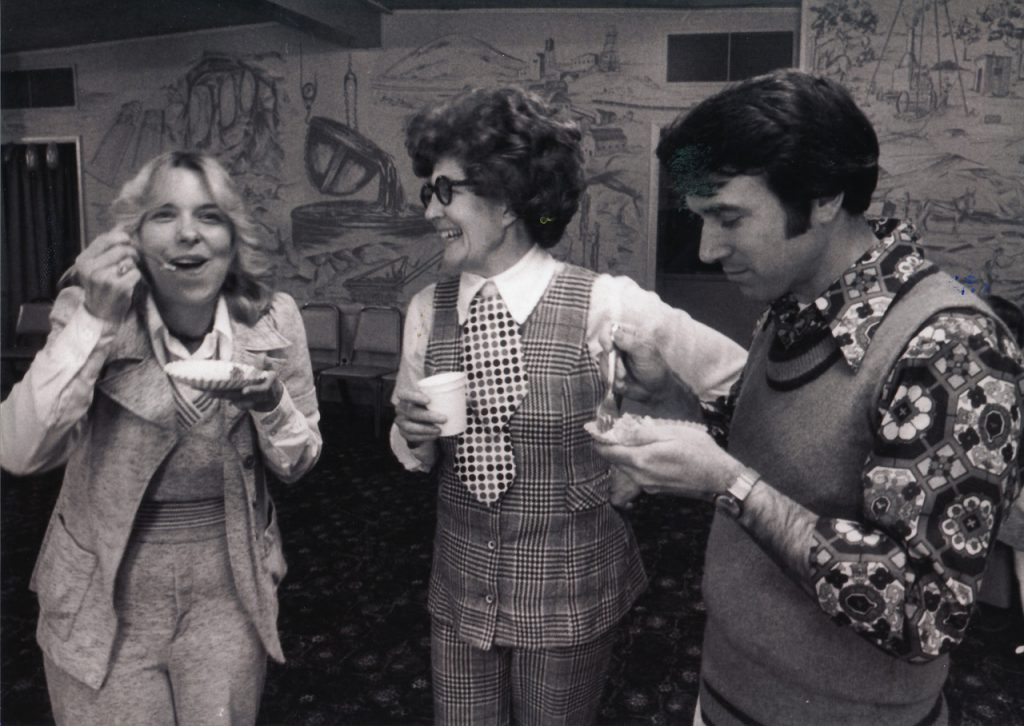 I’m so pleased to introduce you to today’s guest-poster, friend and beloved magazine veteran Mindy Berry Walker, who was, most recently, executive editor of Parents. (She’s now helping out on the content end at her sister Cheree’s company, Cheree Berry Paper.) I love this story about her mom, shown above on the left eating cake with Mindy’s aunt and father in the late 70s, and I can already tell that “What Would Mrs. Berry Do?” is going to be my new favorite mantra. Take it away Mindy…

Last night, I made braised chicken thighs for dinner. The night before we had turkey Sloppy Joes. If you’d told my teenage self that someday I’d be roasting carrots while sautéing chicken, I would’ve said that’s bananas. Back then, I assumed I’d figure out meals the way my mom did—with fast food.

Here’s how it went down: We’d all tumble in from our day of work, school and activities (basketball games, pommie practice, church choir…), and my mom would place of bag of takeout on the kitchen counter. Staples included chicken and broccoli and crabmeat rangoons from Ho Wah, the local Chinese restaurant, and burgers and fries from Lamplight Inn, the cozy restaurant the Berry side of my family owned. Fast food chains were still making their way into our rural Midwestern town, about 70 miles south of St. Louis, so options were not robust. When Taco Bell finally opened its doors, my sisters and I could not believe our luck that MexiMelts could be added to our weekly rotation.

I didn’t think much about my childhood dinner routine until about a year ago when I was out with fellow over-worked, over-stretched friends, and we were discussing the impossibility of finding time to exercise. I mentioned that my mom had played tennis nearly every afternoon after teaching when I was growing up. “How did she squeeze it in?” they asked. I explained it probably helped that she didn’t have to rush home to prep dinner. Brows furrowed in question. But the audible gasps didn’t come until I said, “And she never felt guilty about her choice! I never heard my mom say, ‘What’s wrong with me? I should cook more.’”

Part of me would like to imagine my mom deciding not to cook as a form of 70s-era protest. Against the rule that she had to wear dresses or skirts, not pants, when she first started teaching, or the lingering notion that pregnant teachers shouldn’t work up until their due date because their appearance would distract students. But I know her reason, in fact, was much simpler: She didn’t like to cook. She didn’t find it relaxing or rewarding to “have something in the oven.” Her own mother didn’t get satisfaction from making meals, and she didn’t encourage my mom, or any of us, to take it up. Sure, two to three times a month my mom would brown ground beef, open a bag of Doritos and call it taco night. She could also bread pork chops and heat up canned green beans. But once she decided that she could be a good mom—the best mom, I’d venture—without being on stovetop duty every night, and that she and my dad were okay with the cost, the routine was set.

As adults, my sisters and I have all learned to cook. Out of the three of us, I probably enjoy it the most, and I give full credit to my husband Peter, a Brit I met at a crowded New York City apartment party about a year after I’d made the move from Missouri to Manhattan. He cooked the very British Delia Smith’s leg of lamb for our third date, and I was in awe. It was a revelation to me that sifting through recipe books and chopping vegetables could be a worthwhile pursuit.

Now when my parents come stay with us in suburban New York, we cook for them, and they gush over my chicken piccata or Peter’s ribs. My mom doesn’t frown upon the mess or wonder why I go to the trouble. She’s proud of me, and I realize that’s because her goal wasn’t to raise me to be just like her, but to be empowered like she was. To make my own choices and do what works for me.

It’s a lesson that’s carried over to my friends. Says one of my oldest friends Heather: “When I start to feel guilty about relying on the drive-thru more than usual for dinner, I think, ‘Look at Mindy. She turned out fine!’” And Kerry, one of the women who was at the table when I first revealed my fast-food childhood, recently told me how my mom has inspired her. She said, “I was running home to cook after a long day, and I thought, “What would Mrs. Berry do?” 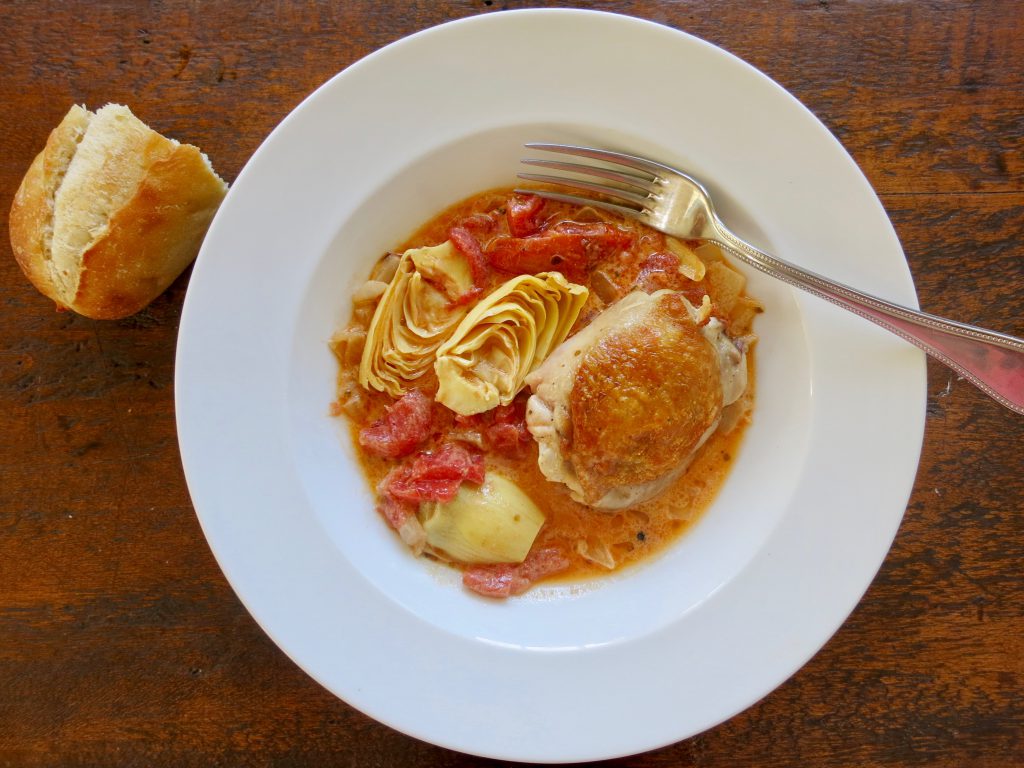 On My Dinner Rotation…

I’m a long-time fan and reader of DALS—the blog and the cookbooks! It’s my cooking inspo nearly every week. Here are a few of my faves:

-Chicken with Artichokes in Creamy Mustard Sauce (above) p. 90 of Dinner: The Playbook and also here. I use boneless, skinless thighs and everyone is happy.

-Turkey Sloppy Joes, p. 98 of Dinner: The Playbook. My 13-year-old loves her sandwich even more with the Dilly Cucumber Salad, p. 161, and I agree it’s a great pairing.

-Black Bean and Avocado Salad, p. 143 of Dinner: A Love Story. The salad is part of a full dinner recipe with fried flounder, but I often just make the salad for potlucks.

–Game Day Dip. I’ve taken this to so many gatherings it might be called “Mindy’s Artichoke Dip” in some circles! Oops! As a Midwesterner, I can’t resist an easy dip that calls for mayo. Neither can my mom. I gave her the recipe and she even makes it for her book club!

Mindy shared the take out advice with me many years ago. It was just gently suggested that maybe I had too much on my plate that day and maybe a lovely take out would bring my sanity back. I have filed it away and credit her. I should have known that her amazing Mom is to be credited with this advice.

Great story! I love the understanding the author shows towards her mother… No blame for what some may see as shortcomings, just acceptance!

Love this in so many ways! Two of my favorite women collaborating (Jenny & Mindy!) And a story about one of my working mom hero’s, Jackie Berry. I still ask myself a few times a week, “what would Mrs. Berry do?” Mrs. Berry, You’ve done wonders for my peace of mind!

I love this post for so many reasons! As a mom it reminds me that while I really do like to cook dinner there are nights when it is totally ok (more than ok) to get dinner to go – that we can still have family dinner together – and that making it all work while being true to your self is so very important.

” She’s proud of me, and I realize that’s because her goal wasn’t to raise me to be just like her, but to be empowered like she was. To make my own choices and do what works for me.”

So nice! And so evolved of DALS as a food blog to offer us readers a little breathing room.

My mom was a boxed dinner and cream of something cook. Chicken and Rice (cream of mushroom soup, minute rice and skin on chicken) will forever be my favorite meal. Tonight we are having tomato soup (from a carton) and grilled cheese sandwiches because I forgot to take out chicken. Everyone will be ok.

I enjoyed this post. I, like Mrs. Berry, started teaching before slacks were allowed, and had to resign when I found out I was pregnant. I had to re-apply for a position after the birth of my daughter. And take out was an important part of my meal planning! I did not, however, spend the saved time playing tennis, although I should have. My extra time was probably spent reading, as well as school work. My three daughters seem to be healthy and are great cooks. None are teachers, so their bank accounts are healthier too.

As a mom of two young boys with a partner and a full time job, this post brought tears to my eyes. What an original gangster for the self-care movement! Tennis over cooking cause that’s what was right for her? Goddess BLESS. Thank you so much for sharing. “What would Mrs. Berry do?” Adding to my mental playlist now.

This was a great read and much needed. We rarely ever get take out, but I do wish I did it more often. I will however get the occassional cooked chicken (maybe once every month or two) from our local supermarket and make a salad and feel sooo lighter and relaxed that I won’t be cooking, but there is a sense of guilt. And there totally shouldn’t be. This read made me feel better! But, I do have a question. Did eating take out on the regular evoke any weight/health issues? It seems in the US, (I live in Europe) obesity stems from a lot of junk/take out food?

Hi Tina!
You ask a great question! My parents, thankfully, were always mindful of portion sizes. To this day, they usually order one meal and share it between them. When we’d get burgers, for instance, they’d order just two things of fries and then we’d split it among the five of us. No one could every supersize their meal! 🙂

I just love this! I love “She’s proud of me, and I realize that’s because her goal wasn’t to raise me to be just like her, but to be empowered like she was. To make my own choices and do what works for me.” I hope to be that Mom, and learn to embrace my own choices. Thank you!

My mom also didn’t enjoy cooking. I was in 11th grade when a guy offered to make lasagna for me. I laughed SO HARD. What was so difficult about that? Just set the oven to 350 degrees for 45 minutes. (That’s the day I leaned that everything that in the grocery store could technically be made at home — a true revelation.) I think my experience growing up enabled me to appreciate food later on. I don’t take a home cooked meal for granted (and sometimes still eat fast food).

What on earth is pommie practice?

Thank for this post. Truly. Tears in my eyes. As a full time working mother it truly means everything to read this. I enjoy your beautiful blog posts and pictures and it just feels so far from what I am able to accomplish right now. I enjoy seeing your gorgeous meals so much more without the internal pressure that my dinner table look the same.

i just stumbled on this post accidentally looking for a recipe and it really struck me. my mom did not like cooking either. once my brother called the local burger joint to order for dinner and the guy who answered the phone said “doesn’t your mom ever cook”. and we both turned out fine. we both like to cook, but more than anything we both agree that we had the best mother in the world and it had nothing to do with her home cooked. meals. thank you for reminding me of how lucky i was.