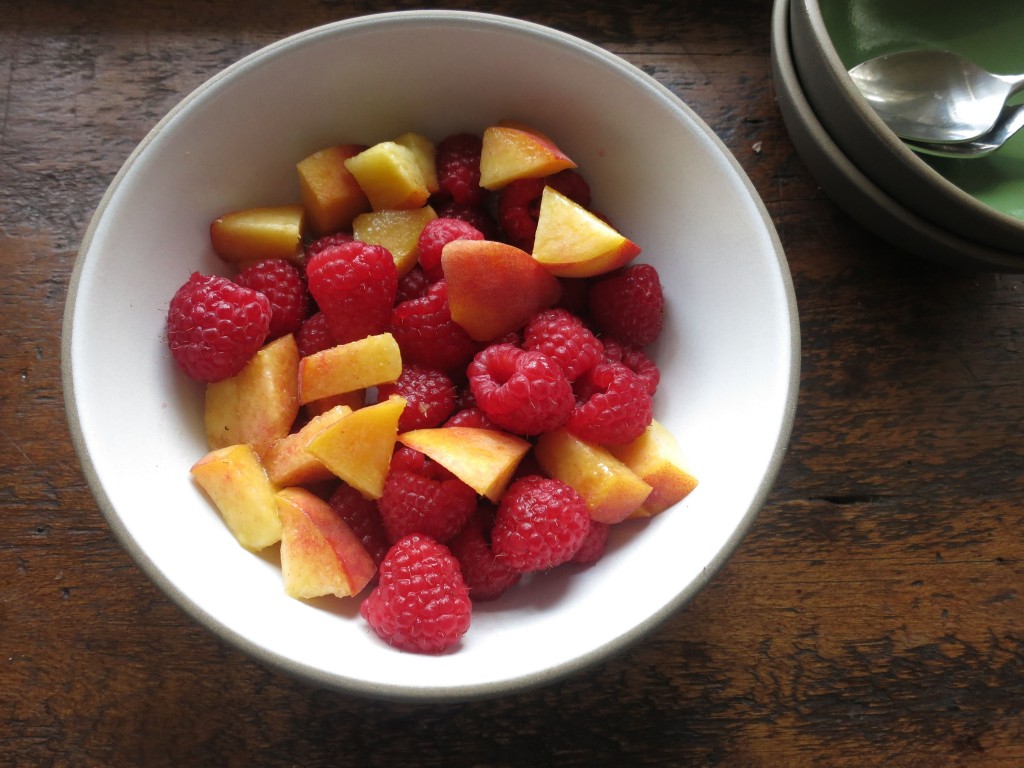 Last year, we sent our then 11-year-old to sleepaway camp for two weeks, where she did all the things kids do at sleepaway camp — she paddle-surfed in the lake, slept in an open-air cabin, competed in color wars, roasted marshmallows in bonfires after dinner, complained about that dinner (and lunch and breakfast), and wrote her parents letters during her free time summarizing it all. Wow, were those some good letters! Though, as anyone who sends their kid away to camp knows, it doesn’t take much for a letter to qualify as “good” — regardless of the contents, it’s almost enough to just know that they are merely surviving without us, and have the wherewithal to put a pen to paper.

Anyway, as you know, I generally don’t share personal details about my kids — let alone personal letters from them — but Phoebe did grant me permission to publish one sentence, which I just re-read the other day, and which I thought you’d appreciate as much as I did:

“I eat fruit before breakfast. I seriously think that if I don’t, my brain will get confused.”

In the same letter, there were multiple tales of her overnight adventure, camping far into the woods (glad I didn’t know about that one til it was over) and swims in the lake at sunrise, but the fruit at breakfast, sadly, was what captivated me. Ever since she started eating solid food (when is that, New Parents?? Eight months, nine months? Can you believe I forget!) we would always start her day with peeled peach chunks, or a mashed banana, or, her favorite, strawberries, chopped up into little pincer-grabbing bites, just to ensure that she got the healthy stuff in before whatever followed. As she got older, and as she was joined by her sister, we just never stopped. To this day, every morning starts with fruit. It’s an honest-to-God healthy habit that stuck. Apparently, it’s so sticky that it happens when we’re not even around to enforce it. Amazing! Something we did actually worked!

I think because Abby’s elementary school graduation (sorry, “stepping up”) is next week, I’ve been more prone to nostalgia and regret — so these kinds of ridiculously small triumphs have been making my heart swell a bit more than is probably normal. But if you are lucky enough to have a baby starting on new foods, try it out. One day, they might even write home about it.

How totally sweet! Glad she wrote home during her time at camp — I know tons of kids don’t do that (me being one of them, I believe….).

I remember reading that you did that with your kids, and was so inspired that since my son (now almost 2) started solids, we’ve done the same. He’s a fruit-lover through and through!

Preview to “tomorrow’s post” made me chuckle. You’re not alone. 🙂

Loved this post. I am finding myself nostalgic as well because I have one finishing sixth grade and another finishing first grade. Every morning when I see my girls, I feel like they grew another two inches overnight and I am overwhelmed at how quickly time has passed since they were babies. I love how independent they have become but I miss the chubby fingers that would grab for the little bits of fruit, veggies and cheerios on the high chair tray. Thanks for bringing back some wonderful memories!

Isn’t it so nice to know that you have done at least one thing right?
One year we never heard from my son while he was at camp. So my husband and I crafted a letter similar to Mad Libs. All he had to do was fill in the blanks and send it back in the addressed and stamped envelope. Nope. Not a peep. The letter came back in his trunk, still blank.
The one right thing that I did as a parent was to never buy a video game system. I’m still patting myself on the back for that one.

I wish I had the foresight to do it at breakfast, but as a crazy working mom I was focused on making sure their breakfast was hot and hearty. But lunches- well lunches are packed (thank you Jamie Oliver) and everyone gets some sort of fruit depending on the season. The only time you may not get an actual fruit is when you take baby carrots or celery or cherry tomatoes. But they would always eat the fruit and make requests- we don’t like plums stop buying them. I don’t enjoy apples without cheese or peanut butter – my three girls cannot get enough of them now. Just yesterday my youngest who is misisng the last week of school for basketball camp so she is finishing her final labs during lunch with her teacher told me: “Mr. Baylor says he wishes you would pack his lunch because I always have a tasty looking sandwich with lettuce and tomato and my fruit looks yummy. I told him that you were the best lunch packer.” My soul danced for hours. Good job mom!!

the one thing i feel we’ve done right is insist that our boy (almost 7) take at least ONE bite of everything on his plate, even if it’s a food he knows he doesn’t like (tastes change!). He doesn’t even think about it anymore. He tries everything and pronounces whether it’s a thumbs-up or a thumbs-down. Sometimes he forgets that he doesn’t like kale and eats it all (he loves broccoli).

So easy and so smart. I’m definitely going to implement this with my kids (and myself!).

I’m feeling some of the same (mine’s 14). I hear in his tone that he pities other kids who eat poptarts and chocolate milk for lunch, but then I cringe when he (slim, healthy, athletic) asks me if 400 calories is too much (oh god what have I done). I know I don’t have control over what sticks but I hope the good I’ve done outweighs the bad, or at least that the sale of the house will afford him therapy for the food issues I’ve inflicted.

The peaches and raspberries look amazing. How pretty! What a great habit you have developed for your family.

You know as a child, visiting such camps is a wonderful thing. A child get out of their comfort zone and learn the aspects of change. I am glad that you initiate and promise such endeavors for your child. I remember my mother was always scared and worried about sending me alone ( with 30 other children and teachers). Learning is an endless process in such camps. Feel good after reading this 🙂

Read this post last night just before falling asleep, drifting off to notalgic memories of raising my three girls. Don’t want to nag, but it’s so important that this yummy-looking fruit not be full of pesticides, etc. I cringe at how expensive healthy fruit can be. Any tips on how to deal with this!

Happiness is … when you daughter tells you the morning after a sleepover party that at midnight, after eating a ton of candy, she asked the parents if she could have a carrot.