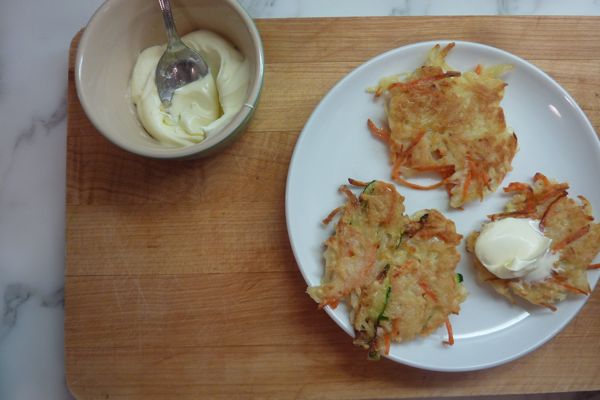 I know — such a buzzkill that mom has to go ahead and add shredded vegetables to the latkes. But how else am I supposed to justify potato pancakes being the only thing on the dinner plate? 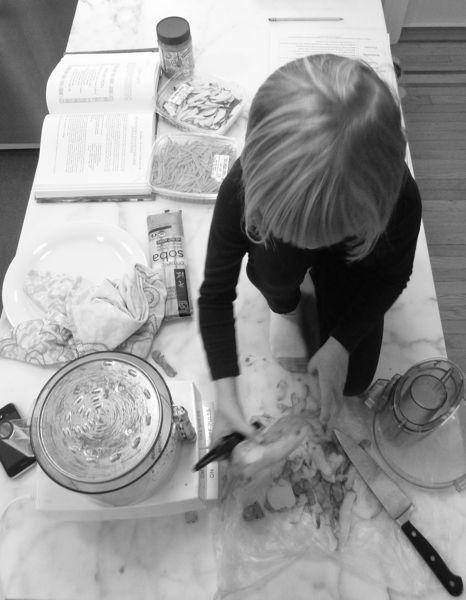 Grate 3 large russet potatoes and 1 small onion in a food processer using the shredding disk. Drain in a colander and add to a large mixing bowl with 1 egg, 2 tablespoons flour, 1/2 teaspoon baking powder, a handful of shredded carrots and zucchini if your kids will stand for it (recipe still works if you omit), salt and pepper to taste. (I go heavy on salt.) Fry large dollops of the mix in vegetable oil (flattening with a spoon) for about 4 minutes a side and serve warm with sour cream and apple sauce. 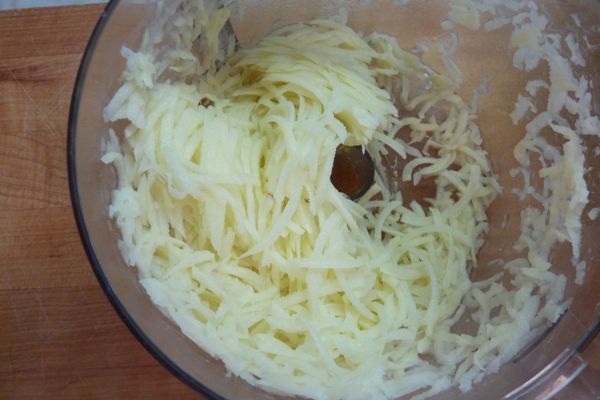 My child despises all form of potato – I am jealous of that.

Totally making these tonight. Thank you.

Perfect timing. We are not Jewish but my eight year old asked if we could try to celebrate Hanukkah one night this year, so we’re making latkes with this recipe.

I love Faye Levy’s recipe–it’s my go-to. Made some last night, in fact. Although I didn’t veg them up, I did fry in very little oil & finish cooking in a hot oven. Mmmmm.

Recipe looks great–I love latkes. Will try them out Friday night. But the pic confuses me. It looks like a kid sitting on the counter with a knife precariously sitting close at hand. Is that what we are looking at? Or are the knife, kid and Cuisinart in the floor? Maybe the perspective is skewed.

No, you got it right. I was using the knife to cut up an onion nearby and put it down to take the pic. But even so, I’m starting to teach the girls how to use knives safely — they are 7 and 8, so old enough to learn some basics.

Made these Thursday night – loved them and will be making them again. Am guessing I’ll do even better with them the 2nd go ’round. (Was a little uncertain about doneness and amt. of oil this time.)

These sound soooo good. My mom used to make latkes all the time when I was growing up – completely forgot about them until now. I have to try this recipe tonight! Perhaps my daughter who only eats green vegetables and will only touch a potato in a french fry form will be willing to try these….thank you for posting!

Omg I need this in my tummy immediately. I haven’t had latkes since elementary school but I remember LOVING them.

We actually make ours with half zucchini, half potatoes–but our son is a teenager, so he can handle all that green. A little parmesan in the mix is yummy too.

I make left over mashed potatoes into pancakes. Form a heaping spoonful into a patty shape, dust with flour and fry in butter…..delicious and reuses the mashed potatoes!

Any sense of how many pancakes you can get out of this recipe? thinking of making some for my son’s class holiday party. thanks!