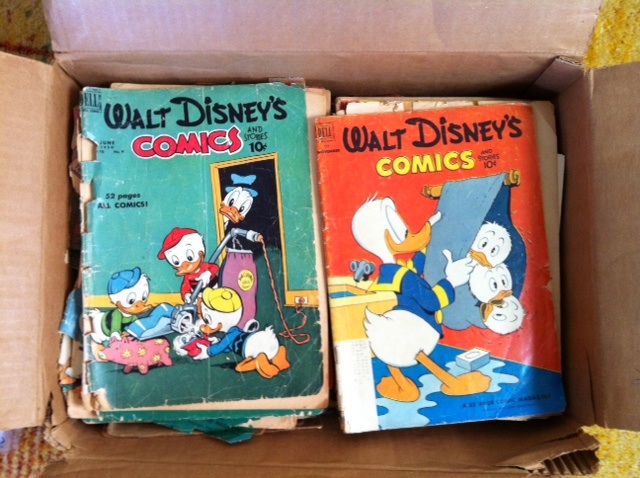 Like Santa Claus, my mom never shows up empty-handed. When she visits, the kids gather at the door, waiting to see how lucky they’ll be this time. Will it be the new Lemony Snicket book? That turtleneck Abby had circled — hint, hint — in the Land’s End catalog a few months ago? A pair of earrings for Phoebe’s recently pierced ears? If a grandmother’s job is to shower love and affection (and presents), my mom is in the running for Awesomest Grandmother of All Time. She also brings things for me, however. Not presents, exactly. Things she has saved. Things that have lived in the boxes that sit in her  incredibly well-curated basement for thirty years — her version of what Jenny and I call “the treasure chest,” the stuff from your life that you can’t bear to picture in a landfill somewhere — which she is now parceling out, bit by bit. Little dolls from her childhood, my old soccer jacket with all the patches sewn on the back, the mimeographed newspaper from my elementary school containing a story I wrote, in second grade, about Arbor Day, the light blue cable-knit outfit I wore on my first birthday, photos of my eighth grade dinner dance (I wore my dad’s tie and WHITE PLEATED PANTS), my old Looney Tunes T-shirt with Tweety Bird on the back and “Rent-a-Kid-Cheap” on the front, an old Wilson A2000 baseball mitt, my freshman course guide and assorted college detritus, and once, I crap you not, an Easter bonnet I made in pre-school out of a paper plate, some plastic flowers, and a light blue ribbon. (Me: “Mom, come on, what am I going to do with this thing?” Mom, actually attempting to tie the bonnet on my head while simultaneously applying the guilt: “But you… made it.”)

As you see, there are upsides and downsides to her role as family archivist.

Not too long ago, though, she showed up at our door carrying an old cardboard box, and when I say “old,” I don’t mean, like, six months old. I don’t even mean thirty years old. I mean, the cardboard on this box had that kind of waxy sheen that truly old cardboard gets, as if it has been holding fried dough and candles for a few thousand years. Stuck to the top of it was a mailing label that had my mom’s maiden name on it, and the mailing address of the house she moved out of more than fifty years ago. And inside, she announced, was a special present for Phoebe. Inside, as Phoebe soon discovered, was my mother’s comic book collection from her childhood, preserved here, as if in amber. Scrooge McDuck, Donald Duck, Mickey Mouse, Bugs Bunny, Kit Carson, Hiawatha, all in various states of parchmenty disrepair, motes of dust rising from the box, the pages literally falling apart as Phoebe turned them. Our oldest daughter is a well-documented comic book enthusiast, but man, I haven’t seen her sucked in so completely, so deeply in a long time. (“Sometimes when I’m reading them, I imagine that I’m grandma, sitting in her room when she was little,” is how she put it.) She spent a couple weeks reading and rereading them, and I joined in, too. The slightly fuzzy, saturated colors of that old ink are so satisfying and the writing — and yes, I realize I am talking about Donald Duck comic books here — is kind of amazing. Scrooge McDuck: Wait, that guy is a metaphor! There’s stuff going on here! These comics are saying something!

Given that they were written in the 40s and 50s, they occasionally veer into uncomfortable, not-very-sensitive cultural observations, but as with TinTin, you can turn that to your advantage. Think of it as an opportunity to talk about how dumb we used to be and how much we have learned and how times have changed, mostly, and for the better. Phoebe loved them so much, we secured another, more pristine shipment, each copy wrapped in plastic, and she currently keeps them all under her bed, stacked nearly in that old cardboard box. Sometimes I’ll be upstairs, on a quiet weekend afternoon, and I’ll peek in and see her there, laying on her floor, propped up on her elbows, reading them. Get to the end, put it back neatly, reach in and pick up the next one. The good news is, you don’t need to have a gift-dispensing mom who doubles as an obsessive family archivist to give this stuff a shot; old comics are practically what ebay was made for. They’re not hard to find — but even if they were, they’d be worth it. — Andy 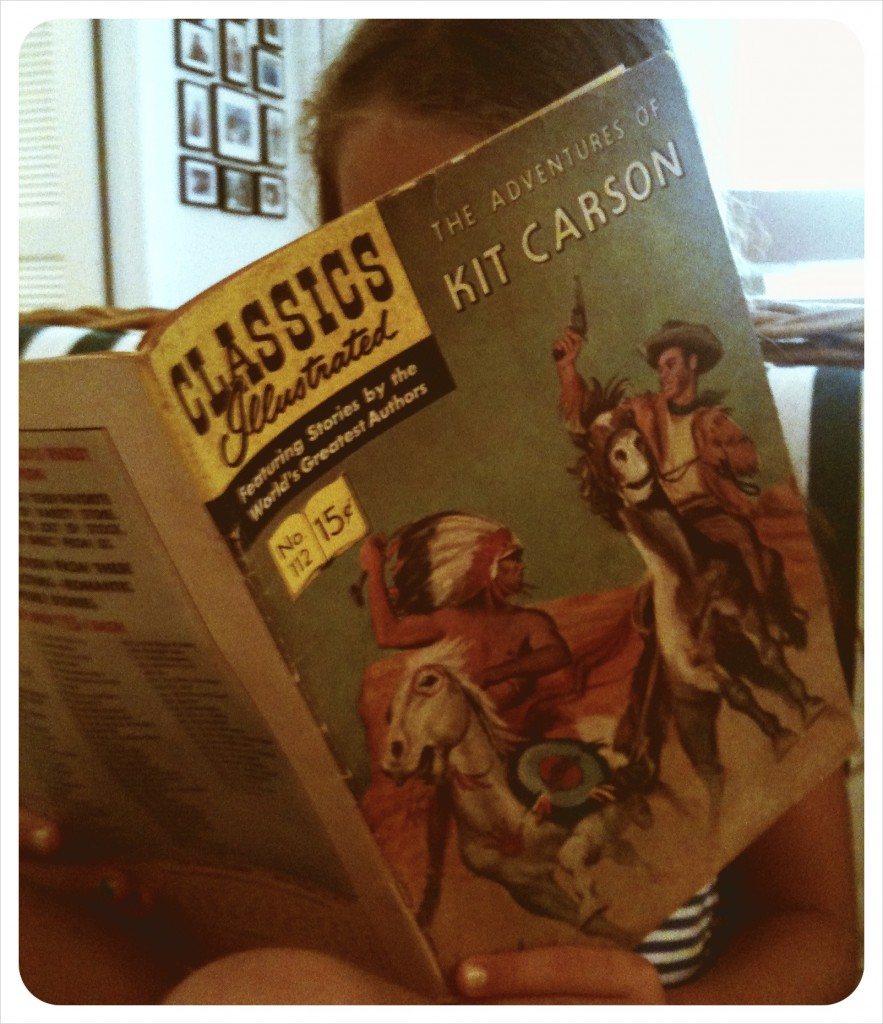 What an amazing and special gift! I love this post 🙂

My husband has all of his old comics (including tin tin) and he reads them with the kids. It is nice to be able to share a bit of our childhood with them.

I love this idea — what a perfect present. I’m going on eBay right now!

I know exactly how Phoebe feels – when I was young, my grandpa doled out my Dad’s old Peanuts books one at a time. Grandparents are the best.

How wonderful! I have a box of Archie comics in the garage waiting for the right moment to be passed on to my kids. My husband has already started the Asterix comics with my son. And while its not as old as any of the above mentioned, currently my 7 year old is laughing himself to tears reading ‘Calvin and Hobbes’. I miss Bill Watterson.

My second favorite part of this post:
(I wore my dad’s tie and WHITE PLEATED PANTS)

My absolute favorite part:
(“Sometimes when I’m reading them, I imagine that I’m grandma, sitting in her room when she was little,” is how she put it.)

so awesome. grandmas really are the best. my husband’s mom saved all of his john deere toy tractors. the metal ones that were made in des moines, ia still. she gave them to our son and they are his most prized possession. out of ALL the toys he has…even his friends always go to those things first.

Aww, your mom sounds so fantastic and loving. I’m finding myself to be more sentimental than I thought possible, too. My son’s 1st birthday was a month and a half ago and I just finally took down his birthday banner and balloons (and it wasn’t laziness, I just couldn’t bear to do it!) I saved one balloon and the banner, now neatly tucked in our newly designated keepsake drawer. My husband was like “Oh, just throw it away already!” Not gonna happen.

I really hope I have a daughter like Phoebe.

Woke up cranky and this made my day, already and it’s only 6:40 a.m. I just bought my husband a whole collection of Classics Illustrated on eBay because his mom threw out everything. He cried when he opened the box. These were wonderful, old comics too and you are SO right about the uncomfortable stuff as a way to discuss important things with kids. Hi Andy — I’m Jenny’s cousin (second cousin once removed!)

I’m looking for the homemade hummus recipe (not lemony snicket!)

this is lovely – but where’s the hummus recipe? 🙂