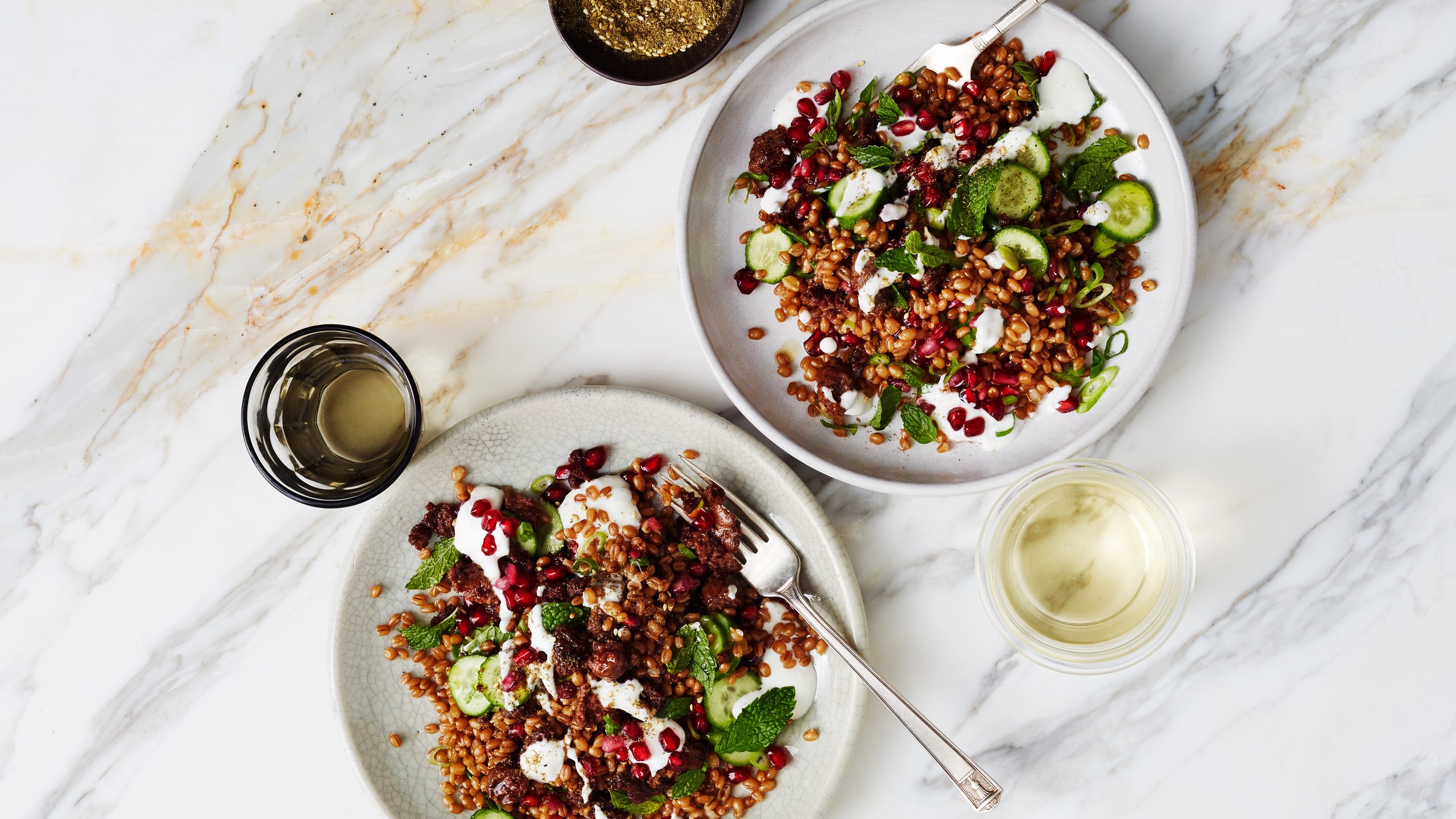 A few years ago, I got in an argument with an anonymous commenter after posting a recipe that involved pan-fried sweet Italian sausages. The gist of the person’s complaint was that cooking any recipe using sausage was not cooking from scratch, and furthermore, if you are someone who makes a living writing recipes, you are breaking all kinds of rules by suggesting this qualifies as a “real” recipe.

It’s cheating, the commenter, wrote. Sausage has so much flavor and so many spices that you don’t need any skill to make a sausage-based dinner taste good.

Because as you know, in addition to being in the business of recipes, I’m in the business of feeding a bunch of ravenous, drowning-in-homework children every night, which means I put a high premium on dinners that practically cook themselves, like this grain bowl made with merguez, a lamb sausage spiked with Middle Eastern spices. Merguez is a little harder to find — a good butcher will usually carry it, or look for D’Artagnan brand in better supermarkets — but it’s also such a special switch-up from the regular old Italian or chorizo links that normally grace the table.

I like using wheat berries in this grain bowl — they’re nutty and firm and hold their own flavor-wise alongside the lamb — but you can also use quinoa or farro if that’s what you’ve got lying around. I toss in the crispy merguez crumbles, add mint, parsley, cucumbers for a cooling crunch, then a punchy yogurt dressing, and the result is a low-effort, high-reward dinner that earns regular rotation status, especially if I’ve been my best self and thought to prepare a batch of wheat berries the day before. (The grain simmers for just about an hour—remembering to do this in advance is the most technically challenging part of the recipe.)

I’ll add here that, in general, the girls aren’t huge proponents of bowl dinners (unless it’s of the sushi or burrito variety) and this recipe can easily be turned into a plate of sausage, cucumbers and pomegranate seeds, with a dollop of yogurt dipping sauce, hold the grains. And if that’s cheating, I’m totally cool with it.

Head over to Bon Appetit‘s Healthy-ish for the recipe. Photo by Bobbi Lin for Bon Appetit. 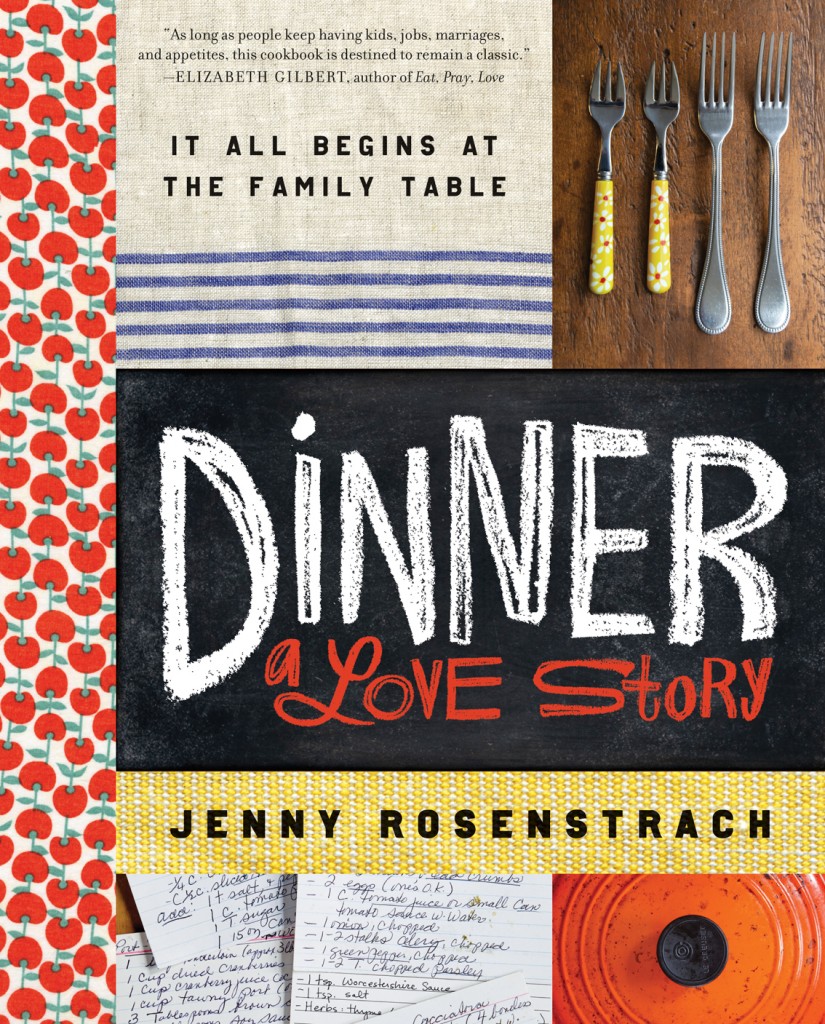 As always, for more quick and easy dinners, check out Dinner: A Love Story or Dinner: The Playbook.

That looks like the perfect dinner to me: easy, tasty, fast. What’s not to like? I’m often in the position of making dinner on a tight timeline so we can get to after dinner homework or extra-curricular activities so I appreciate having some recipes that require minimal effort.

Oh gosh, people slay me….people’s opinions and constant scrutiny slay me….and by people I don’t mean you, Jenny, I mean “people”. Glad you could laugh it off and keep on “cheating”. I rely on it daily.

I have this crazy thing I do with blogs that bug me-I stop reading them. Keep doing what you’re doing. Don’t let those kind of people get under your skin.

Andrea/Laura – Just want to be clear that I thought the whole “argument” with the anonymous commenter was actually kind of funny. It didn’t bother me in the least. (One day, when I’m brave, I will write about the ones that do.) But I love the support from you guys anyway! Make this bowl, it is DELICIOUS. xoxoxoxoxoxoxo

I feel like Charlie Brown – good grief! I am impressed you found some humor. Looking forward to trying out the recipe.

That is crazy – you might as well say that you shouldn’t cook with bacon or smoked fish. They have presumably never eaten cassoulet. Funny how people like to find fault and have a dig.

Your cookbooks and website were my saving grace when I was figuring out how to navigate family dinner with two toddlers, and many of those same relatively easy, reliably good recipes have become regular favorites years later. Many thanks.

Haha, and while you’re at it, packaged pasta- cheating, you didn’t mill your flour yourself- cheating! You’re telling me you didn’t raise and slaughter your own meat before dinner? Disgraceful cheating 😉

Thank goodness for cheaters like you, Jenny! I’ve adapted your breakfast sausage recipe in Celebrate Everything to whip up many a dinner. I substitute the maple syrup for fennel seeds to create a meaty sauce for veggie noodles or as
a taco filling. Just last week, I served these sausage patties alongside butternut squash soup. If sausage is wrong, I don’t want you to be right!

I love sausage as an easy way to get a head start on dinner, especially when staying in a vacation house and I can’t count on a well stocked spice shelf! That said, no mergueze was to be had in any of my grocery stores when I decided I had to make this. Not a problem, it’s very easy to turn a pound of ground lamb into sausage with the addition of a few spices (I followed a recipe from David Lebovitz’s book, MY PARIS KITCHEN). It turned out great and will definitely be repeated.

This looks delicious and nice and easy to make. I love “cheating” with quick recipes the family will love.

Make your own sausage? Really?

OK, I have a Martha Stewart pie recipe that starts with planting the pear trees. She said that she didn’t expect her readers to do that even though she’d done that herself, but still . . .

I’m a sometimes-reader, first time commenter, and I just find that hilarious! Too too funny. MAKE YOUR OWN SAUSAGE OR YOU DON’T COUNT! HA. I’m all for making things from scratch and eschew recipes that involved canned cream of chicken or whatever… but sausage???

We made this tonight and it was so delicious! I added a little avocado to hit the creamy texture end of the spectrum, (would’ve used feta if we’d had some around). Seriously – the perfect meal.