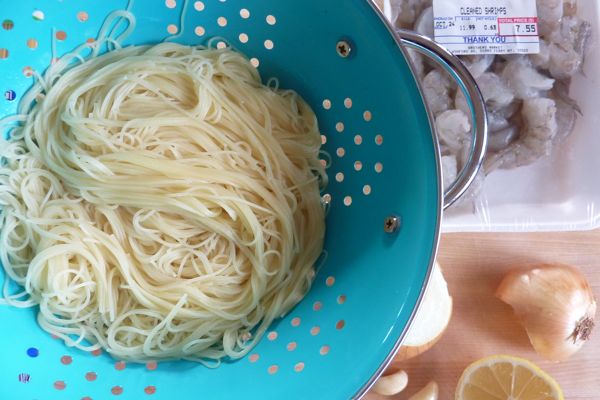 My daughters are 20 months apart in age. When they were babies, people would take one look at the hollowed-out shells that once housed our functioning selves and say It’s tough now, but you’ll be so grateful later when they play together. I thought these people were lying just to make me feel better. We were so in the thicket of “now” that we couldn’t imagine a “later.” I could not fathom these helpless little things entertaining each other, or a time when we would trade in defensive parenting — hovering, watching, reacting — for active parenting. Nor could I imagine a time when they’d actually sit down to a real meal with us. The sitting part stymied me, as did the “real meal” part. Their plates held not so much dinner as a poor man’s tapas selection: cubes of raw red peppers, microscopic pieces of chicken or shrimp, a little bowl of noodles. But I turned a corner the day I decided to marry two of those foods to make one: Angel Hair with Shrimp. It’s so simple it seems almost stupid, but it worked as a perfect inaugural family dinner because the shrimp and pasta mix together without fully integrating. So if it flops, you can always send the ingredients back to their separate corners. And if it works, the kids get a real meal, and you get a glimpse of your future.

In a medium pot, cook angel hair as directed on package. Drain and toss with olive oil in the colander to prevent noodles from sticking. Return the pot to the stovetop and turn heat to medium. Add more olive oil, one chopped shallot (or 1/2 onion), one clove of garlic (minced), a few red pepper flakes (optional), salt and pepper, and cook about one minute, nestling garlic amidst the onions to prevent it from burning. Push to the side, turn up heat slightly, and add 3/4 pound of cleaned shrimp. Cook about 1 1/2 minutes on one side, then when you flip them over, pull in the onions and toss until everything is cooked through. Squeeze a little lemon on the shrimp, then add the angel hair, tossing to combine. Add a handful of chopped parsley, unless you think it will render prospects of consumption null and void.

I will try it tonight. I’m nearly certain the shrimp will be extracted *cue shrieking* but it’s worth a shot!

Sounds like a lovely dish–I’ll have to try it soon. I might have better luck with scallops though (more white, less noticeable).

It speaks ill of my state of mind that after I read this post, the first thing I wanted to ask was, “OMG! Did you really get them to eat cubes of red pepper?”

yum, I’m getting hungry. one of my favorite combinations. we add arugula and some good parmesan cheese too.

So tasty! My boys are 20 months apart as well and I got the same comments. I’m happy to say that at 10 and 8.5 they are incredibly close and they do entertain each other.

My sister in law made this over the summer but had broccoli in it too–so delish–thanks for the reminder!

I just made this for my kids. It was exactly what I was in the mood for tonight because I didn’t feel like cooking and it was so easy!

Mine are 17 months apart (2.5 and almost 4), and I hear you…on all counts. Family dinners are really tough for us – especially since my oldest is allergic to dairy and shellfish. So usually the girls eat, then my husband and I eat. It’s kind of a bummer. But I am definitely working on making them adventurous dinners so that we can someday all enjoy the same food!

Our two children are 14 months apart. Jeffrey is 3 and Catherine is 2. We manage now to sit down for meals together as a family. Mostly dinners. It’s often chaotic, messy and loud. Someone will refuse to eat. Someone will spill their drink (hopefully not Mommy). But in these past few months I have seen the kids enjoying their meals. I am pleasantly surprised to see them eat some rather exotic foods. I try not to make something separate “for the kids.” There are no hot-dog-mac-n-cheese dinners. Offer them what you’re eating, and eat well.

Pasta works great. My son and daughter love shellfish. It’s always a winner in this house.

Did you mix two pastas together there in that photo? It looks like angel and linguine together?

“I read your newsletter. Do I win Placemat Art?”

And why did I never think of making this combo before?