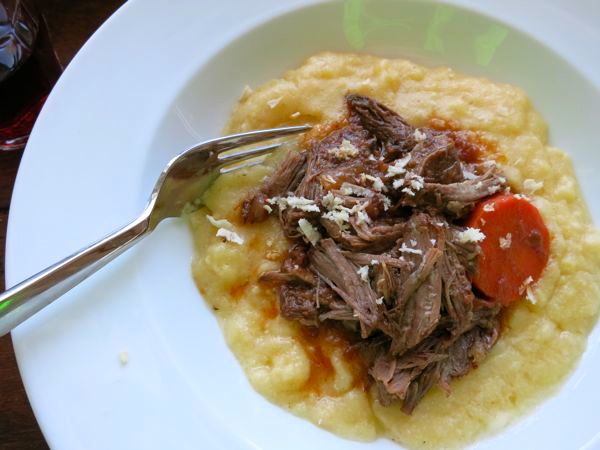 It’s been so long since it snowed in our neck of the woods — and by “snowed” I don’t mean the one-inch dusting that disappears as soon as the sun rises, or the icy kind of snow that lands in October on trees with autumn leaves still clinging to them. (What was that?) The snow I’ve missed so much these past few weird winters is snowman snow, snowball fight snow, sledding snow, snow so bright, you see blue when you walk inside after being outside for too long. Snow that gets everyone talking about the snow. Snow that gets everyone talking about what kind of dinner they’re going home to after a day in the snow. My friend Tom swore by his 2-ingredient slow-cooker pork  (“a bottle of root beer and a pork loin, and that’s it!”); my friend Bonnie had a big ole pot of minestrone simmering on the stovetop. There was chatter about a stromboli and at least a bolognese or two. Me? I had only one vision: short ribs and creamy polenta — which should go down with Cake and Ice Cream, Peanut Butter and Jelly, Bagel and Cream Cheese as one of the great romances in culinary history. Unless you are 9 or 10 years old, in which case, just the beef, no polenta please. But when it came to warming up snow-chapped faces, the shredded melty beef on its own still seemed to do the job just fine. 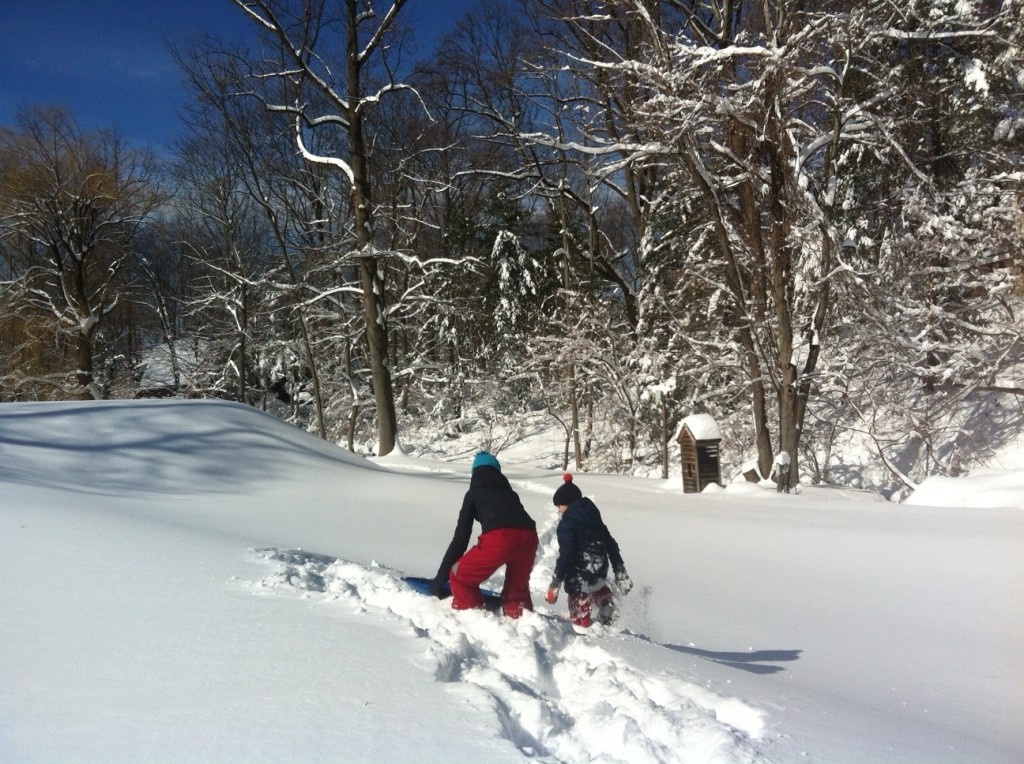 Beer-braised Short Ribs with Harissa
Adam, the editor of Bon Appetit, was the first to give me the idea for serving short ribs with freshly grated horseradish. Just a light dusting cuts the richness a bit and gives the dish a subtle kick. It’s purely optional though. Especially if you are the type who wouldn’t know what to do with a leftover knob of fresh horseradish.

3 lbs short ribs, salted and peppered (we used boneless for this recipe, and they were great, but we both agreed that bone-in tastes better)
olive oil
2 garlic cloves, minced
1 onion, chopped
2 carrots, chunked
1 pint dark beer
2 heaping tablespoons harissa
half of a 14-ounce can diced tomatoes (about 3/4 cup), reserve the remaining tomatoes in case you need to add to the pot later
5 sprigs fresh thyme
freshly grated horseradish (optional)

Preheat oven to 325°F. In a large Dutch oven, brown short ribs in olive oil over medium-high heat. Remove once brown on all sides. Reduce heat to medium, and add garlic, onions and carrots. Cook until onions are soft, about 4-5 minutes. Whisk in beer, harissa, and tomatoes to the pot, then add back ribs and thyme. Bring to a boil, then cover and place in the oven for 4 to 5 hours. Toss every hour or so. (And add more tomatoes if liquid has boiled down too much and it looks dry.) After 4 hours, ribs should be falling apart.

Serve over Creamy Polenta with a sprinkling of freshly grated horseradish.

Could I use my crock pot for this? It looks delicious!
We do something similar (and surely straight from the White Trash Cookbook) with a beef roast, onion soup mix and a bottle of coke in the crock pot.

I promised my husband “man food” for Valentine’s Day – this qualifies and then some.

Jess – I’m sure it would work in crock pot. I’m hoping that my more well-versed crockpot readers will weigh in on that, though…anyone?

I am proud to say my little ones love polenta! I served your pork ragu over parmesan polenta last week. The three year old inhaled it and exclaimed, I am lovin’ this polenta! I prefer to do my short ribs in the dutch oven as they do need more attention throughout the cooking process. I did do the pork ragu in the crockpot though – fantastic!

Mmm, I love to serve a sort of French beef stew over polenta for Sunday dinner. I make the stew on Friday or Saturday and either let it warm in the crockpot while we are at worship or just heat it on the stove while I make the polenta. Have you ever tried the gussied-up polenta with herbed tomatoes in The 150 Best American Recipes? http://www.amazon.com/150-Best-American-Recipes-Indispensable/dp/0618718656
It works well with summer tomatoes or winter grape type.

Definitely a crockpot. I am a true lazy, er, busy cook. And it seems a little like magic when you can throw everything in and have it ready by dinner. Living in Northern Californian foothills, getting snow is a big deal. I think it’s been 3 years since we saw any at our altitude. But maybe the short ribs will work like some kind of culinary rain dance. They definitely look delicious.

We didn’t even get snow, but I think I’ve been having sympathy-cravings for comfort, snow food.

Jo, how many hours did you do the pork ragu in your crock pot? On low or on high? I made the pork ragu last week and had to borrow my neighbor’s dutch oven because I was too terrified to try it in the crock pot without explicit directions. It was a delicious dish in the (borrowed) dutch oven. Every recipe that Jenny features with ‘dutch oven’ in the instructions is a “page turner” for me. I don’t want them to be page turners! I know I need to break down and buy a dutch oven….sigh.

Oh WOW. this is….just beautiful. this will be making its way into my kitchen asap.

Snow food is very important up here in Maine right now. I just got finished clearing the 35.5 inches of snow we got off our deck! I’m definitely ready for the meal pictured above. I am, however, too tired to make it! Lucky for me there’s some left over beef stew in the fridge. But I’ll put this one on my list for later this week.

As a strict no alcohol person, what can I substitute for the beer?

We were all over stromboli for our snowed in meal – yummy!!!

This sounds delicious. Where do you find harissa in the store? Thanks!

Sigh. I’d love to make this but I still can’t get to the store! I did manage a big pot of freezer/pantry soup yesterday, which we shared with some similarly housebound neighbors. Maybe today (Tuesday) our street will get plowed? Forty (yes, 40) inches of snow does start to wear on a person after a while.

I would totally make this in the crock pot! I make your pork ragu in the crock pot too and it’s awesome. Just cook on low all day 6-8 hours, depending on how much you want the meat to fall apart. Also, what kind of Harissa do you use? I have never heard of this and looked on Amazon and they have a sauce, powder and a paste. I’m sure any would do, I just wondered what you prefer. Thanks for all your recipes. I bought your book at Christmas and love it!

I’m pretty sure short ribs are the #1 cold weather comfort food. They are just. so. good.

Enjoy the snow, we have some pretty rockstar snowmen sitting in our front lawn!

I made these for dinner today and they were awesome- thank you! I got them going early, then went out to deliver Girl Scout cookies, and when we came back in a few hours later the house smelled so good! Our menu; short ribs, polenta and salad for dinner, Thin Mints for dessert….Next time I’ll try the horseradish for sure.

We just made these short ribs and polenta for dinner and they were amazing! We love your blog! You guys rock!