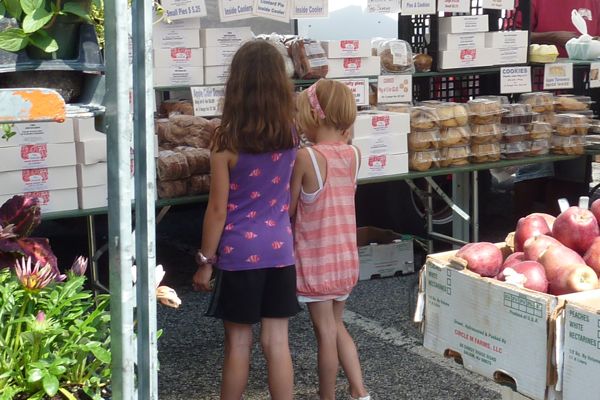 Here’s a question: how do you get your kids to try something new? We’ve deployed various methods over the years, including but not limited to: bribery (eat this, get that), blackmail (you don’t eat this, you don’t get that), begging (dear god, I am begging you, just one bite), guilt (but poor mommy spent twenty minutes making these fava beans for you!), rebranding (well, yes, if you want to get all technical about it: white broccoli is cauliflower, happy now?), and camouflaging (what? the pancakes taste weird today? Hmmm. I’m sure it has absolutely nothing to do with the flax seed we put in the batter). Each of these techniques has its place, depending on your level of existential dread and desperation, but each always tends to leave us feeling a little cheap or duplicitious (but only for a second). Which is why, these days, we’ve been so into the idea of getting the kids to invest in their own food, and their own choices: if you involve them in what they eat from the beginning, they’re a lot more willing — excited, even — to give it a shot. I think there’s a basic management principle in here somewhere, which I could articulate if I knew anything about basic management. My best attempt: if you give your li’l employees a seat at the table, they’re a lot more likely to care.

At the Farmer’s Market on Saturday morning, we handed Abby and Phoebe a ten dollar bill and told them to spend it however they wanted, as long as they promised to eat what they bought. They came back five minutes later, after some truly epic hand-wringing — should we get the cider donuts? apricots? a pound of bacon? special juice? a mini cherry pie? we don’t know what to get! — with a small bottle of lavender honey and two artisanal sourdough rolls in a brown paper bag. Once we got home, they immediately made themselves sourdough and honey sandwiches; not a classic combination, I’ll grant you, but really, what’s not to like? Then, at the supermarket on Sunday, we tried it again. We told Abby she could pick any new thing she wanted, as long as (a) she’d never tried it before, and (b) was willing to try it now. This is what she came back with: 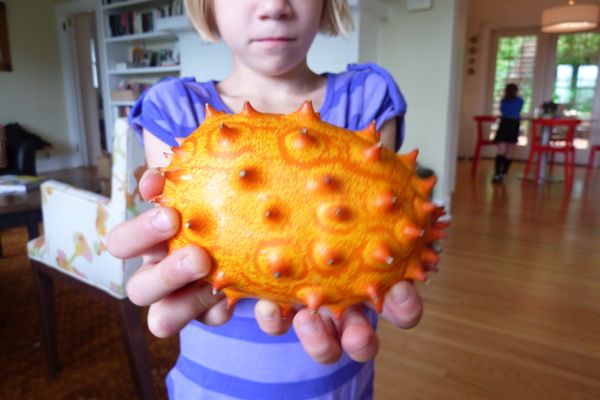 And this is how she described it, along with the whole idea of shopping for herself and taking a little responsibility for what she eats. Getting invested, I suppose, is another way of thinking about it. Buying in. Committing. Anyway, in Abby’s words:

Can I actually tell a story? So I walked into the supermarket and we decided to look at the vegetables and fruits first. I looked at all those yummy green beans. Then we walked towards the fruits. I love raspberries! We saw a big orange fruit with spikes coming out. I asked my mom, ‘What the heck is that?’ My mom told me, ‘Oh, that’s bitter, you won’t like it.’ But then I went over to my dad and said, ‘Look at that weird fruit’ and he stared at it in a freaky way. He picked it up and said, ‘Oooh, you wanna try it?’ And me and Phoebe said, ‘Okay!’ Once we got home, I was having a playdate with my friend Madeline and my dad said, ‘Let’s see what it looks like inside’ and me and Madeline were really interested. Inside, it was green juice with grayish-green seeds. And — hey, you can’t start a sentence with ‘and,’ Daddy. Stop! No! Okay, so we took a spoon and tried it. My dad told us we could spit the seeds out, because they didn’t taste that good, but the juice was delicious! I love that fruit. Well, I like it, not love. Every weekend, my whole family does stuff like this. We go to shopping and buy fun snacks, vegetables, pasta, and all different things. I always feel like I’m part of the family when I shop because I get to shop, too, and get to try a lot of different things. I like picking food out by myself  because it gets me excited to try it just because I picked it out. I usually pick out new things. Like miso soup and the spiked fruit that I had today. It usually goes really good, but sometimes it doesn’t work out so well, like when it’s something I don’t like. I’m a good shopper. 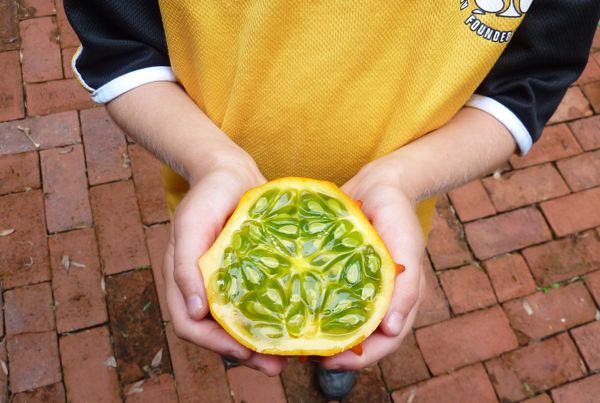 OK, I’ll bite. What IS that fruit?

Your kid just said “yummy green beans” so I’m not sure you need our help.

How awesome does it feel to read those words:
“Every weekend, my whole family does stuff like this.” A reminder that kids love routines and being with their families. Congrats — and thanks!

something that’s happening for us (i can’t call it a technique because we didn’t really do it on purpose): our son (7.5) wants to try things he’s seen his fav TV chefs (currently jamie oliver & chuck from “chuck’s day off”) make. it’s pretty cute to hear him say “that looks delicious!”

Your first paragraph is dead on, that is so how it is with young kids and food. I’m going to have to deploy this strategy with my kids at the farmers market the next time we’re there.

a relative of the cucumber!

We might just need to try this with our Phoebe. I think that would work! Thanks!

I use this strategy too, at the co-op and the farmers’ market. My daughter loves the story of how my husband, when he was eight, decided he would try to like a new food every year. The first year it was tomatoes, then mushrooms. Sometimes I make a fuss about a new food (how fun! it is), other times, I just stick it on her plate. It might get left behind, but it might not. After about a year of doing this with asparagus, she finally ate it, declared she loved it, and asked for more. Unfortunately, the adults had already eaten the rest of it. She said next time she’ll eat her asparagus first.

Have your children in the kitchen to help you prepare meals. They will be more interested in trying something new.

sengler: as our pal 654 points out, it’s a horned melon, aka kiwano. And they ain’t cheap!

i can’t blame her, that’s what i would have picked out too 😉

Love the idea of giving my boys money to spend at the market/ grocery to get them more invested. Going to give it a try this week!

I read this post this afternoon, and immediately tried it. My daughter and I went straight to the farmer’s market, and had great success. (Full story here: http://housepants.blogspot.com/2011/06/farmers-market-experiment.html)

Thanks for the wonderful idea.

This really inspired me. My son is only 21 months old, but I really want him to enjoy food as much as we do and whenever I’m cooking I give him little bits and pieces to munch on until the meal is ready. Until now he’s not a very picky eater so I guess I’m doing something right or I’m just lucky! Thanks for sharing this and keep on blogging! 🙂

that is a fantastic essay! we have always had a non-negotiable rule that our son must try one bite of something, and if he doesn’t like it then he doesn’t have to eat anymore. He’s usually pretty good about that – sometimes he likes the new stuff and sometimes not, but he really does like trying it. This week though, he asked to try the zucchini, ricotta, and feta tart/quiche I made for dinner, and after one bite said he didn’t like it. Which was totally fine. Except that a minute later he said, “but I’m going to eat it anyway.” I nearly fell out of my chair. He’s 5 years old, and I am wondering when he grew up. He graduates preschool tomorrow so maybe he thinks he has to ba a big boy now. 😉

That is a weird fruit if you can call it that!

I love this post- everything about it… especially the end :).

I always appreciate reminders, and this reminder to *get and keep them involved* comes at a perfect time, so thank you!

My oldest daughter was very picky from the get-go so I’ve been working on her for years. I have a method that has been mostly successful so far. I first have her try the tastiest version of an ingredient I can think of, then I incorporate that ingredient into other recipes.

For instance, I had bought some spinach-cheese nuggets, the kind that are breaded and look like chicken nuggets. Anything nugget-shaped is easier to get them to try I’ve found. Well she liked them ok but they weren’t great. I was not ready to give up since I had finally gotten her to eat something with spinach in it.

A few nights later we were at a restaurant and they had spinach artichoke dip on the menu. I had a big “Aha!” moment and ordered it. She was skeptical at first, its not the prettiest dish. But I said, “oh that’s just spinach, you know, like those nuggets you had the other day, only this has tons of cheese all over.” It worked! She tried it, loved it and spinach has been on the menu at our home in various, healthier, forms ever since.

This has worked with many, many vegetables? I got her to start eating broccoli by ordering a delicious broccoli cheese soup at a restaurant. Unfortunately, nothing I’ve tried will turn her into a green bean eater it seems!

My son is often enthusiastic about picking out and/or helping prep our food…but freezes up when it comes time to eat it. We have long employed Ellyn Satter’s advice for trying new foods: he has to taste one bite of everything—at each meal it is served—but he doesn’t have to swallow it. Because tasting something new is one thing, but actually having to swallow it is something else. Giving him an out in case he doesn’t like something has made it easier for him to try it in the first place. Only rarely has he opted to spit it out…which we coach him to do discreetly.

I must say: I love using this rule. I love its simplicity. I love that we can apply it easily and consistently. I love that it leaves the door open for his personal tastes to change and evolve. And I love that with it, we avoid bribery, cajolery, sneakiness and threats.

Not to suggest this makes everything perfect; our mealtimes still have their hassles (45 minutes to eat spaghetti? Really???).

Oh, if I gave my son $10 at the farmers market, he’d buy ten bucks worth of donuts. (I know that’s why I’d need to stipulate he buy something he’s never eaten before). PS: I read your newsletter, do I win the wine?

I got my daughter to eat miso soup by calling it “Little Mermaid Soup” (because of the seaweed or whatever the green stuff is), and the tofu is “cubes of cheese”. Also, anything served on a stick is a winner.

1. So what on earth was the freaky fruit?

2. My daughter hates to try anything new, but I am going to try your Pick-Out-Something-New-But-You-Have-To-Eat-It strategy on our next shopping trip.

3. I’ve discovered that she will try new things if they are just lying around. Yesterday there was a bowl of pecans on the counter and she ate them all. If I’d asked her to try one there would have been much whining and wringing of the hands.

How was the strange looking fruit!

I LOVE to try new things and now have a picky and non picky boy… I say that they have to try everything just once. And some times they like it!