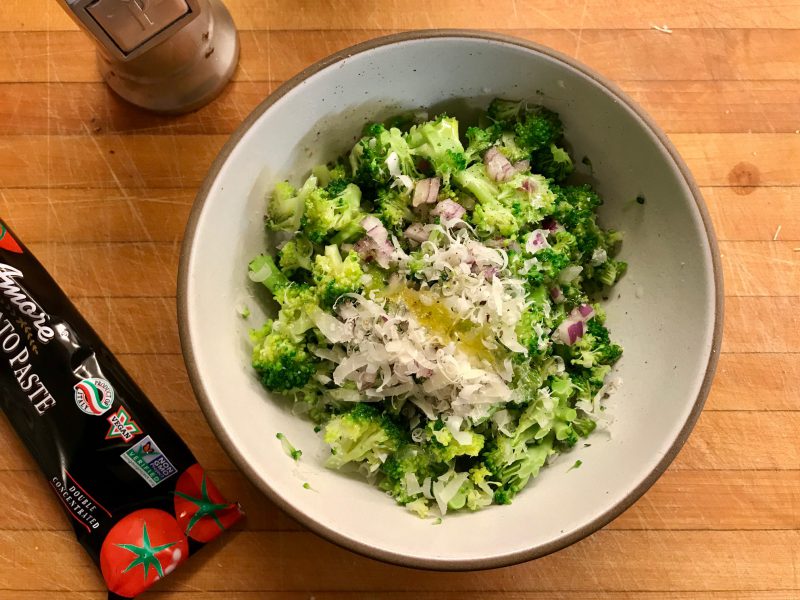 .
An abbreviated list of what I feel grateful for on a daily basis: I married a guy who is a Yankees fan even though he grew up in Virginia; I live five miles away from a restaurant that is a destination for diners around the world; and, most relevant for today’s purposes: My children like broccoli. And by “like” I actually mean “love.” Though at one time in their lives they’d only deign to put a floret in their mouth if it was drenched in ketchup, nowadays, they routinely request that “crispy glazey” recipe to accompany whatever prosaic protein is on the plate; they are genuinely dejected when there’s more chicken than broccoli in the Chinese takeout; and then a few weeks ago, when presented them with my new favorite chopped salad, Abby turned to me and said, “Why do we never have enough broccoli?”

It’s a good question. And, now, one that might be filed under the category of Be Careful What You Wish For.

Because very soon after that, I was listening to Tom Colicchio on Marc Maron’s podcast when the conversation, naturally, turned to broccoli. Maron made some point about how when you know a basic technique, like, for instance preparing vegetables, you can apply that technique to anything. Colicchio agreed but countered with (paraphrasing) Well, it depends, sometimes I want my broccoli to be roasted but sometimes I need it to be fresh. Hmmmm. And then, a few days later, I was working at Bon Appetit and a recipe came across my desk called “Broccoli Bolognese” (I’ll link to it when it’s live) that called for the broccoli to be finely chopped, stems and all. It made me realize that I’ve been stuck in a roasted-broccoli rut, and maybe it was time to get back to fresh, and also everybody should have my problems. I bought two heads that weekend, then simmered and shocked them, and stored in the fridge for…whatever came up.

I didn’t have to wait very long. That night I chopped up half the batch and tossed with my fave vinaigrette, finely minced red onion, and Pecorino Romano, in the process realizing I could just use broccoli instead of lettuce for any of my favorite salads… 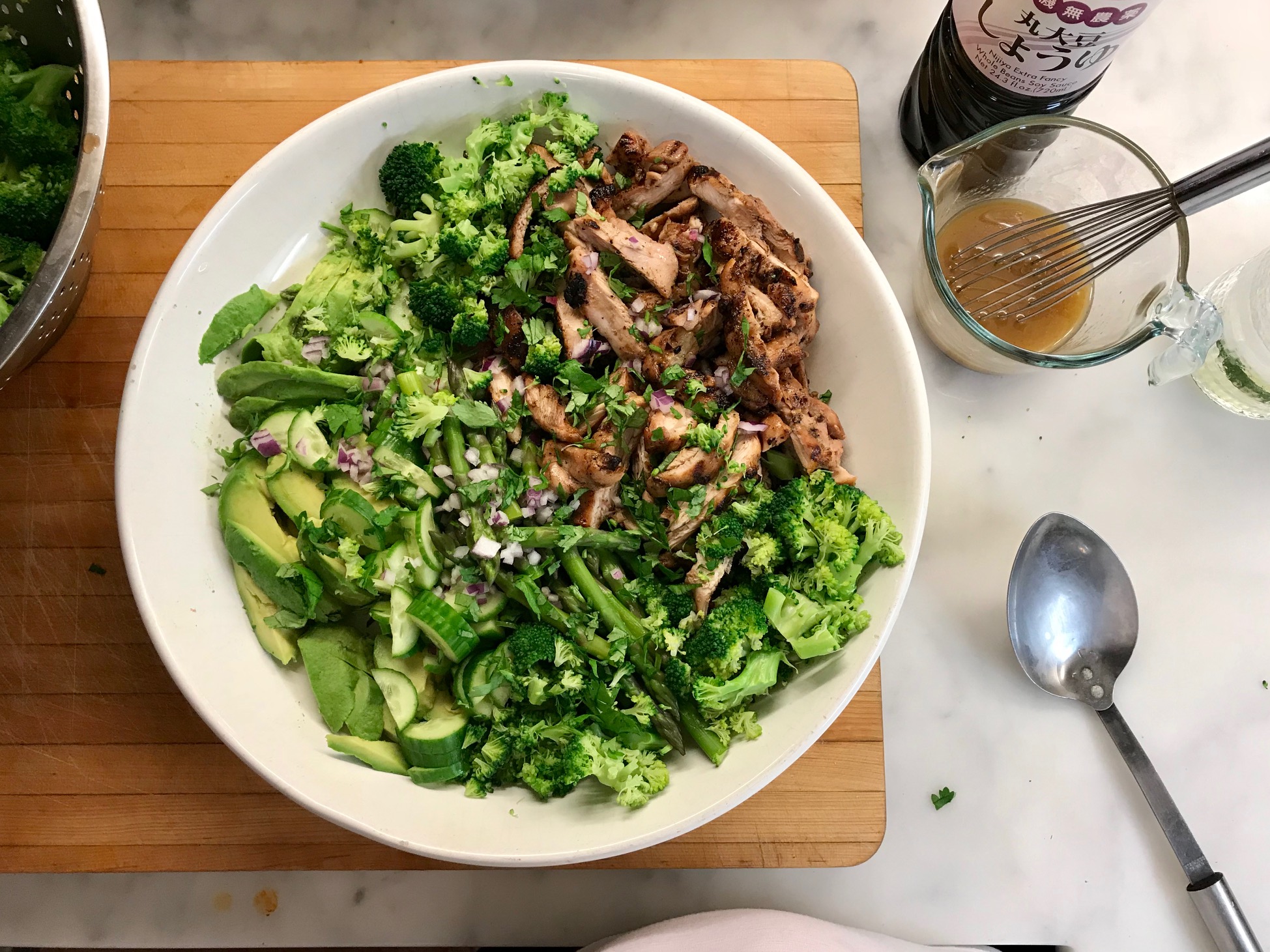 .
…then later in the week, on an atypically warm late September night, I grilled chicken, then going down this road, basically piled in any green I could scavenge up, including cucumbers, avocado, green beans, and my broccoli… 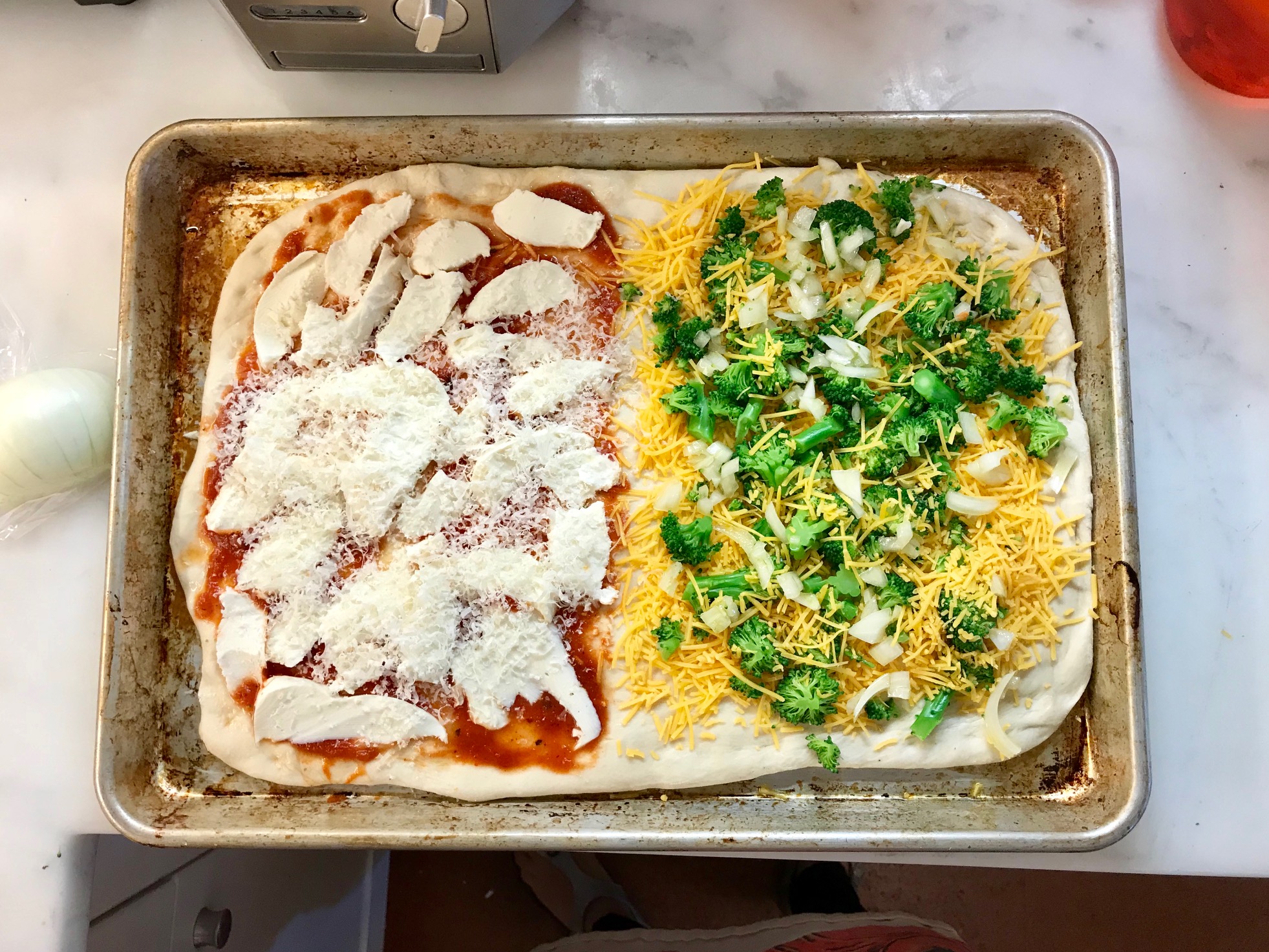 .
…A week-ish later, late on a Friday afternoon, we were loading up the car for a grandparents visit in Virginia, trying to figure out the dinner plan for our five-hour drive. Andy suggested grabbing pizza in town, which made me remember that we actually had thawed pizza dough in the fridge and, hmmm, is this enough mozzarella, wait, there’s cheddar and broccoli. Before I knew it I was baking a roadie pie, half margherita, and half broccoli, cheddar, onion. Guess which side went first?

Chopped Shocked Broccoli
Remove broccoli florets from head, preserving most of their stems. Boil in salted water for four minutes, then immediately plunge into ice water. Strain, remove ice cubes, and spread on paper towels to dry out. Once dry, chop into small pieces as shown in photos. Toss into salads and pastas, or add to pizzas and sandwiches.

Broccoli and Cheddar Pizza
Update: I’ve made this without shocking the broccoli first. Just make sure florets are cut into small pieces before baking the pizza.

4 tablespoons good-quality olive oil, plus more for brushing
1 16-ounce ball pizza dough (store-bought is fine) preferably sitting out at room temperature for about 15 minutes to warm up a bit and rise
6 ounces sharp cheddar, shredded
1 large bunch broccoli (see note), chopped into small pieces (it’s fine if they have already been shocked, but it’s not necessary when you are blasting them in a 475-degree oven)
1/2 small onion, chopped
pinch red pepper flakes
kosher salt and freshly ground pepper
chopped fresh chives, optional

Preheat the oven to 475°F. Using your fingers or a pastry brush, grease a 17 x 12-inch rimmed baking sheet with 1 tablespoon of the oil. Drop pizza dough into the center of the baking sheet and, using your fingers, press out and flatten the dough so it spreads as close as possible to all four corners. (This takes time, but you want it to be thin so it cooks evenly and quickly.) Sprinkle with almost all of the cheddar, leaving a ½-inch border around the perimeter. In a large bowl, toss the broccoli, onion, red pepper flakes, salt and pepper and remaining olive oil, then give it all another toss. Using your hands, add the broccoli mixture on top of the cheese in an even layer. Sprinkle remaining cheddar on top. Brush the exposed edge of the crust with a little oil. Bake for 15 minutes, until the crust looks golden and cheese is bubbly. Remove the pizza to a cutting board to cool. Top with chives. Slice into eight rectangular pieces and serve. (Or wrap in foil if you’re hitting the road.)

Also: This one from the archives just cause, you know…ALDS champs.

Can one chop broccoli without musical accompaniment? I think not.
https://www.nbc.com/the-tonight-show/video/dana-carvey-performs-choppin-broccoli-with-orchestra/2797783

hahahaha greatest comment ever and can’t believe i didn’t think of it.. one of my all time fav sketches.

I recently read this book, “Eating on the Wild Side” by Jo Robinson. Each chapter covers a fruit/vegetable. Quite fascinating. In it the author mentions that broccoli loses its nutrients very rapidly once it’s harvested. So eat it within a day or two of buying it. Also, many of its nutrients are water soluble so, you actually should not boil it. Steaming or roasting are the best methods to cook it. The process of chopping it also causes loss of nutrients. So, it’s best to cut right before cooking.

‘sometimes I want my broccoli to be roasted but sometimes I need it to be fresh.’
I don’t understand this distinction – presumably the broccoli you roast is also fresh.

Sorry if that wasn’t clear, Ellen. What I mean essentially by “fresh” is not cooked. (My general rule for a dinner plate is that one thing should always be fresh, and that usually happens in the form of a leafy green salad.) But in this case, you’re right, I’m actually calling for “shocking” the broccoli (simmering for a minute or two, then plunging into ice water to stop cooking and preserve green color) so that’s a form of cooking. HOWEVER, the end result is that it loses a little of its crunch, but it’s still bright and clean tasting. Unlike a roasted broccoli which has a deeper, more concentrated flavor, and crispier texture. Both preparations are delicious depending on what else you’re serving. Hope that makes sense.

My son’s favorite vegetable is broccoli (followed closely by Brussels sprouts). A few years ago he had to contribute 2 family recipes to a class cookbook and he wanted my recipe for his favorite broccoli. I had to laugh because all I do is steam it and toss it with butter and a lot of grated Parmesan. I love that he loves it so much.

I am a huge broccoli fan, roasted, raw in salad like a slaw or just steamed sitting pretty in my bowl next to my best chicken curry
More ways to devil sift and love broccoli is fine by me
Thanks

I make a version of the the typical broccoli and bacon salad. My dressing is a little plain yogurt, a spoonful of good mayo, a bit of vinegar, hot sauce, s&p, and the tiniest pinch of sugar. Good with dried cranberries and sunflower seeds or almonds. Apple chopped quite small is also good in it. I cannot make enough to have leftovers, but there are worse problems.

I made that half-broccoli/half-margarita pizza last friday night and it was a huge hit! Broccoli was our gateway veg (“look, it’s a tree and you can pretend to be a giant!”) and now my son eats all kinds of vegetables w/o too much balking.

I am so envious that your family like broccoli – my husband and sons find it incredibly bitter and can barely choke it down. But it’s one of my favorite vegetables!

I’m a little confused on the chopped shocked broccoli directions, when you remove the florets do you boil only those? You say to preserve most of the stems but what do you do with the stems?

Sorry if that is confusing Doris. You are basically removing (and boiling) the florets and their small stems — chopping off most of the large stalk.

A few months ago my 3 year old twins suddenly went from hating broccoli to loving it. I was so excited until I realized that now my husband and I would have to share with them. Same goes for cauliflower. At least they still wont try roasted fennel.
Thanks for reminding me of shocked broccoli! My favorite is with flaked tuna and too much lemon juice.

Made this for lunch today, adding a garlic béchamel sauce for the base and some chopped sausage for my boys. It was fantastic!

Ohhh but you can use the stalk too! It has more calcium, iron and Vitamin C than the florets and when you chop it up it’s a crunchy bite to stirfrys, roasts well, great grated for coleslaw and perfect for this salad… plus no waste! I need an I love broccoli t-shirt!