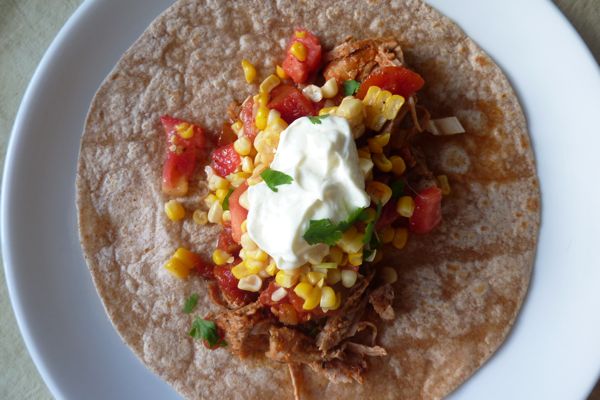 Let’s say you just went shopping at Trader Joe’s so your refrigerator is stocked with staples like pork and chicken and onions and olive oil as well as some fun little extras like prosciutto and Whole Wheat Naan. Let’s also say that on your way home from your weekend in the Berkshires, you picked up some fresh corn and tomatoes and blueberries at a roadside farm stand. So you’re set in the Fresh department, too. And then, for the sake of argument, let’s pretend that you have spent the last decade working on the food team at two major magazines, write a daily food blog, and in fact have even co-written The Book on family dinner.

If all this was in fact the case, you probably don’t imagine that you would ever find yourself in the position I was in last night. Staring at my full fridge at 6:20 with not a single idea of what to feed my family. Zero. When I was working at Cookie, I used to regularly get 6:20 emails my friend (and co-author) Pilar who found herself in the same predicament. Tabula Rasa, she’d write. Complete Tabula Rasa.

Since Tabula Rasa strikes more often than one might think, I’ve trained my brain to default to one of three settings: The Omelet Setting, The Risotto Setting, and the Taco Setting. Any one of them would have made good use of the staples in the pantry as well as my roadside score. Last night I went with Pork Tacos. 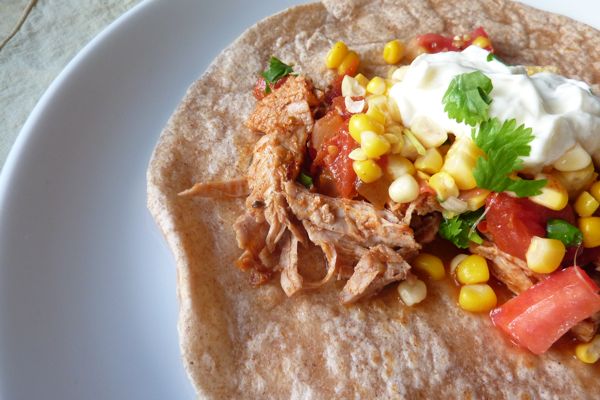 Pork Tacos
Warning: This is not a throw-it-together tabula rasa meal like an omelet might be. It requires about 45 minutes of hands-on time. And if you like to pan-fry your tortillas (instead of heating in oven) it ends up being a three-pot meal. But, delicious, delicious. And worth the investment for us because both kids will generally eat some variation of it, which means we are rewarded by a nag-free meal.

In a small Dutch oven or a medium, straight-sided pot, heat 2 tablespoons olive oil over medium-high heat. Add a salted-and-peppered pork tenderloin (about 1 1/4 pounds; the standard size) and brown on all sides. (It does not have to cook through.) Once it’s browned, remove from heat and to the same pot, add 1/2 onion (chopped), 1 clove garlic (minced), a dash of red pepper flakes, salt and pepper. Cook until onions are soft, about 3 minutes. Add one 15-ounce can diced tomatoes, 1 tablespoon chili powder, 1 bay leaf, and a few hefty shakes of dried oregano. Stir to combine, then add pork tenderloin back to pot, nestling it in the liquid. Bring to a boil, then cover pot and simmer for about 30 minutes. (If you have to go pick up your spouse at the train because you forgot to tell him you took the car home from the station yourself, well, now is the time to do it.)

When pork has cooked, remove from pot and, using two forks, shred it into pieces as shown above. (There is no art to this; in fact the less artfully done, the better.) Add shreds back to the sauce, stir everything together, then assemble tacos as shown. Top with sour cream.

Boy do I feel foolish, I thought tabula rasa was another name for pork tacos!!! A quick Wikipedia search made me realize that John Locke didn’t have pork tacos in mind when he coined the term!! Great recipe. We had fish tacos on Monday night so I used up one of my settings already this week. A Trader Joe’s just opened up three blocks from work and I think I have died and gone to heaven.

Amanda – you are funny…and instructive. Had no idea John Locke coined the term. I’ve always just thought of it as Blank Slate. Nothing going on. Zero. My brain. So happy for you re: Trader Joe’s. You’ll have to report back on your finds.

Your tacos look wonderful. I found your blog by chance but consider it to be a happy accident. I love your recipes and will be back often. Have a great day. Blessings…Mary

This looks so good…if only I had some pork tenderloin at home! Maybe tomorrow…

This looks delicious! I’ll add it to own blank slate list!

I made this tonight but I used the TJ’s taco seasoning mix to simplify further. A little spicy for the kids, but delicious for the adults!

We are really into tacos and this recipes looks good!

I just wanted to let you know that I have been making this about once a week since you posted it. It’s got such great flavor for such a quick meal. Oh, and it’s great with some scrambled eggs in a breakfast burrito the next day too! Thanks!

Great idea! We had cooked pork loin leftovers in the fridge and an avocado corn salsa we made with our leftover grilled corn on the cob. Quick stop for tortillas (which we microwaved), some shredded cheese from the fridge, some hot sauce and we were set!

Made these last night and they were delicious! My family has loved all your recipes I’ve made…so I thought it was time to say thanks 🙂 Keep up the good work!

I Liked Bodum on Facebook. Do I win the Newsletter Prize?

Any reason why I couldn’t use TJ’s wonderful-tasting canned corn (one of their all-time staple items)? I have made corn salad with this fresh-tasting corn and it is yummy.

I do that tabula rasa thing in front of the fridge more nights than I care to mention. I have a hunch your blog is going to be a great help. Thanks!

PS. You may wonder why I’m here on Thanksgiving. This has been a day like any other with laundry and chores. DH and I are looking forward to celebrating Thanksgiving tomorrow with my grown family, who are bringing dinner. I will provide pie. They will provide food and fun. Yippee!