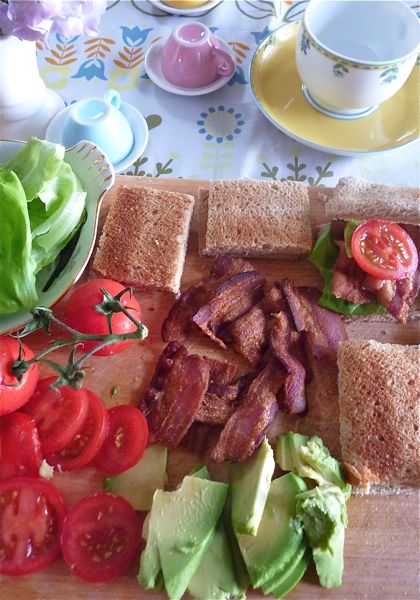 This is not exactly a traditional tea party spread, I realize. What you’re looking at is all the makings of one of my daughters’ favorite dinners: The BLT with Avocado on whole wheat toast. The girls get to assemble right at the table and it’s almost always good for a giggle: Sandwiches for dinner? Mom, you’re craaazy!

On this particular night, they turned into quartered tea party sandwiches because Andy had plans and wasn’t home for dinner. When Andy is out, I can go one of two ways. I can go Maverick where we barely sit down at the same time let alone eat the same thing. (This is the usual direction I head.) Or I can go Supergirl where we break out one tea cup from my wedding set (for me) and a few tea cups from their Ikea tea set (for them) and I announce that we’re having a juicy-meaty girl talk over our meal. So far, juicy-meaty girl talk amounts to the exact same thing as regular old dinner table talk, but my plan is to start getting them used to telling me those awful Queen-Bee-and-Wannabe friend stories now so they don’t shut me out down the road. I think I already hear mothers of teen-age girls laughing at me. (And this post isn’t even live as I type? how does that work?)

No mother-daughter Life Lessons were imparted over the Niman Ranch Applewood Smoked bacon that night. No therapeutic confessions or burning questions that required the wise counsel from someone who not only made it through second grade, but actually went on to survive middle school (me). Instead, my eldest decided to unload later that night — telling a dramatic story involving a lunchroom bully — while she was lying in bed with the lights out. With Andy. 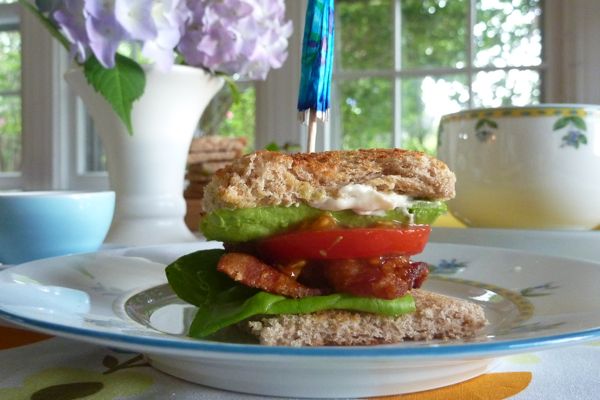 Wow, your daughter has great taste in food. My tea parties consisted of imaginary tea and air popped popcorn!

I’m doing dinner-with-daughter-sans-spouse tonight — wish I could get my girl to eat a BLT! Instead, we’re going to have her favorite, ravioli, along with a giant salad of farm-fresh greens & veggies. You can guess who’ll be having what…

I am always trying to get playground gossip out of my son at dinner and sometimes we do get some pretty tall tales. But, like your daughters, he also saves the real stories, fears and dreams at bedtime.

We are big fans of BLTs at our house too, my son once said and (we still quote it to this day) “Go easy on the T, but heavy on the B for me!”

PS- we made your Quinoa with spinach and egg and ohmygod!!! That was amazingly good! I would have paid top dollar for that at a restaurant. With the leftovers, I made a lovely black bean, quinoa and tomato salad for lunch today. Great recipe!!!!

Ooooohhh. My daughter would love the whole dinner tea party thing! We’ll have to try it …

i’m thinking you gave your daughter such a positive space during the tea party that the bully didn’t even enter her mind.
(of course, i say this after i asked my two year old for a kiss and she turned her head away and yelled NOOOO and then turned to her dad and said “daddy kiss.”)
le sigh.

what an adorable idea. (also, i just got the chronicle books catalog, and i’m out of my mind excited for your cookbook!!!)