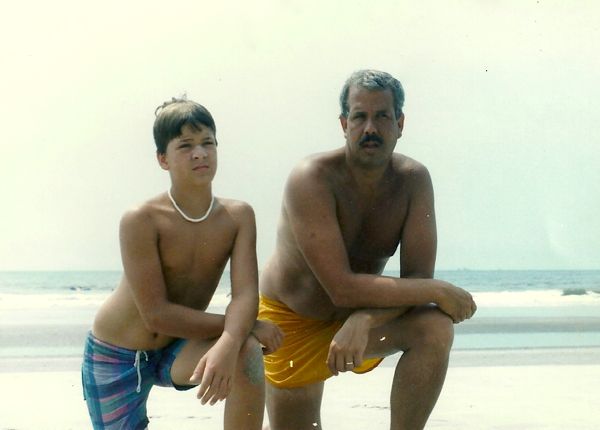 I remember this vividly. When I was six years old, I was in the basement of our house on Aldenham Lane, playing with my dad. Our basement was the kind of basement I feel bad that my kids don’t have today – a concrete floor, an old wooden workbench, high metal shelves sagging with caulk and stains and Maxwell House cans filled with screws, a queen-sized foam mattress, a pool table (with ivory inlays and broken slate), and a paint-splattered station where my older brother would lose entire afternoons building these intricate models of Spitfires and Messerschmitts. The kind of basement, in other words, where you could dismember GI Joe dolls in relative peace.

Anyway, we were sitting on the floor, building something with my Erector Set.

(A parent now, I know what he was thinking.)

He looked at me.

Cue sound of bowling ball crashing through giant pane of glass. The bracing, ammoniac sting of honesty like that! Wow. Damn! I still, to this day, give him grief for this. (Me: I can’t believe you just came out and said it. Dad: Well, what was I gonna do, lie?) This could be the adult in me talking, but I feel like I remember the room going all wobbly, like the staircase shot in Vertigo. Clearly, my dad did not believe in secrets.

Except when it came to his cooking. And by cooking, I mean the one meal he was responsible for making all by himself, from start to finish. His lone specialty was known around the house as The Dadoo Special, a name which, it’s true, does have a certain grandeur to it, but which – no offense, Dad — also sounds a lot like something a dude with zero chops in the kitchen would name the one dish he figured out how to make on his own. I loved the Dadoo Special. Partly because I loved my dad, but also because it did, in fact, feel special. It tasted really good, and appeared only in the warm summer months, when school was out and the Weber was up and running and the grown-ups enjoyed their grown-up drinks outside, in the woodchipped area out back, behind the azeleas, where my dad had set up – this was the seventies, after all, the era of lawn sports, mandals, and non-ironic mustaches – a freakin’ horseshoe pit. Looking back, the Dadoo Special was nothing more than a souped-up burger – a little sweet, a little spicy – that, amazingly, required no ketchup at all. I would tell you exactly how my dad made it…if he had ever let me watch him make it. The Dadoo Special, you see, was always prepared in private, behind closed doors, on a need-to-know basis only. And I, apparently, did not need to know.

“Get out of the kitchen,” he’d say, and to stay and risk not having Dadoo Specials for dinner always seemed a risk not worth taking.

I still don’t know exactly what was in the things, and – since my dad probably hasn’t made one in thirty years – I doubt he does, either. But I do remember the taste, and the slight crunch of the onion, and feel fairly confident that I can recreate it – heck, maybe even improve upon it — here. We’ll be making these on Father’s Day, in honor of my dad, and in the spirit of openness. No more secrets, not in this house. — Andy

P.S. Re the photo above: Yeah, that’s a puka shell necklace I’m wearing. And yeah, that’s zinc oxide on my nose. And yeah, I’m wearing plaid JAMS. The thing on my dad’s upper lip? That would be a mustache. Viva los 70s! 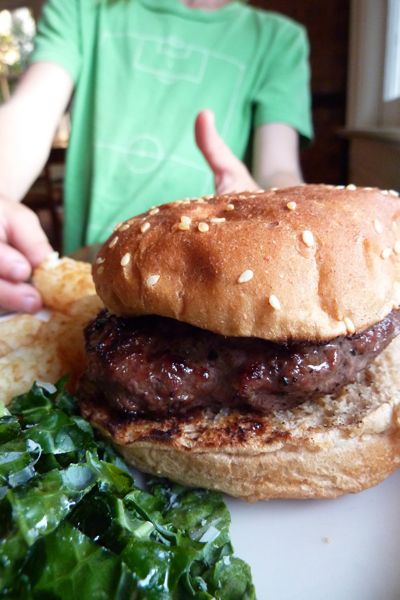 Okay, so the Dadoo is basically meatloaf on a bun. Pretty sure my dad used Heinz barbecue sauce, but the homemade stuff is better. (See our recipe for that on page 238 of Jenny’s book.) In a large bowl, combine 1 ½ pounds ground beef, 1/3 cup barbecue sauce, ½ cup of finely chopped Vidalia onion, a couple dashes of Worcestershire, and lots of salt and freshly ground pepper. Combine gently, as you want to preserve some of that loose texture of the meat. Grill over medium high heat for about 3-4 minutes per side.

Reminder: Tell me your favorite part of the book (not on the comment field of this post, but through the official contest survey) and be eligible to win some pretty awesome prizes. You have until July 9 to enter so get reading!

I’m going to guess it had Lipton Onion Soup mix in it. That was pretty much standard in its day and, though I’m reluctant to admit it, made things pretty damn good. Your recipe is probably better though!

Puka beads! Paint splattered basements! Burgers! I loved this post. I lost my dad in March– and for the first time, I’m remembering something about my dad that’s making me smile and not cry: his classic meatloaf sandwich. Thanks, Andy. (and yes, I bought the book!)

I love the photo. Plaid JAMS! The post made me laugh out loud. Twice. I can’t wait to try The Dadoo Special.

When I was very young, my dad used to make something he called Hamburger Souffle, which was basically ground beef with a couple of eggs thrown in, loosely fried up in some kind of grease. I adored it topped with substantial amounts of ketchup. A close cousin of the Daddoo Special! (A few years later, when he met my stepmother, she told him in no uncertain terms that they would be SHARING the cooking in their new home. The first dish he learned to cook was Supremes de Volaille a la Moutarde. He’s now one of the best cooks I know.)

it was totally lipton onion soup mix, i bet! my dad made something similiar, but added crushed saltines as well. it was delicious. i had a craving for one the other day and put it on my menu for next week. thanks for sharing!

…sending to my husband now (only do this with the ones i know he’ll really appreciate :))…

Ha that’s awesome! Love the pic, and you just described my childhood basement spot on. I miss that basement. Can’t wait to try the Dadoo Special!

love the picture! classic 🙂
btw, just made Arroz con Pollo from page 52 in the book…and wow!!! all 3 kids loved it, the husband loved it, i loved it…win, win, win! and leftovers to boot! yay!

Non-ironic mustaches and meatloaf hamburgers. A perfect post for fathers day. Thanks guys.

(Also – JAMS! But while yes Andy you look stunning, your dad is rocking it more. Are those running shorts? Whatever they are, they win the party.)

Oh, God you just reminded me of the one meal my Dad used to make for us kids growing up- “Daddy Burgers”. They were some crazy ground beef concotion burned almost a crisp with “American” cheese melted on them while still in the skillet- Oh, yeah and served on Home Pride wheat bread (because that was healthy!)Good times.