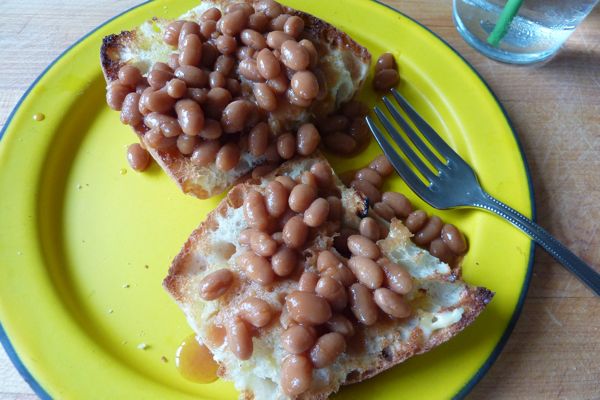 Last summer, on the final day of school, I drove Phoebe up to Skaneatles, a beautiful postcard-y town in the Finger Lakes region of New York. It was a belated sixth birthday celebration, and an opportunity for a little old school father-daughter bonding. The plan was to stay two nights in the Sherwood Inn, go for a cruise around the lake on the Judge Ben Wiles, do some hiking up at a nature preserve in Baldwinsville, and, of course, eat our faces off at the famous (locally, at least) Doug’s Fish Fry. Doug’s is one of those places that feels like it’s never not been there, where you grab a red plastic tray and order at a long counter, cafeteria-style, the kind of place where every entree comes with a side of slaw, and where there’s a model train running on an endless loop around the main dining room. Our first night, we went to Doug’s and ordered our fish and fries, and I got a side of baked beans. Now, let me back up for a second: at this point, Phoebe had never eaten a bean in her life. It wasn’t that she didn’t like them; she was appalled, repulsed, and disgusted by them. When I made chili, I’d have to keep one half of the pan bean-free or risk her not touching any of it. When I put a small bowl of black beans on Phoebe’s plate, to go along with her quesadilla, she would pick up the bowl with the tips of her fingers and remove it from her plate with utter contempt. Anyway: back to our night at Doug’s. We carried our trays to our table, got our ketchup and tartar sauce and tabasco, and sat down. Damn, did my beans look good — thicky and gooey, dark with molasses, with chunks of pork product floating in it. “Come on, Phoebe,” I said. “How can you not like this?”

I pressed on, trying to reason, trying to make her see. “Okay, but let me ask you,” I said. “Do you like ketchup?”

Well, I explained, that’s what is in these beans! (Plus, you know, beans.) I offered her the standard deal: just one bite. Try it once and if you hate it, spit it out. She finally relented, had her one bite, and, to her eternal credit, swallowed her pride and declared her undying love for baked beans. I was relieved that she had seen the light, of course, but frankly wondered what had taken her so long. Baked beans were a staple of my youth, the perfect food; they were what we ate with our hamburgers and hot dogs, only we called them “Cowboy Beans” for the picture of cowboys sitting around a fire of on the label of the Campbell’s can. They were practically engineered for kids!

The beauty of Phoebe’s conversion at Doug’s was that, once she had fessed up to liking baked beans, a whole new world of family dinner possibilities opened up to us. No longer could she say she didn’t like beans. Black beans (for our burritos), white beans (for our chili and our white bean soup), garbanzo beans, refrieds (to go with our tacos), lentil salad: One by one, the dominoes fell — except for lentils, which we’re still working on. And in addition to being an easy first step to incorporating beans into the family repertoire, baked beans are — for my money, at least — an ideal default dinner. When we need a super quick lunch before soccer, if the refrigerator is empty and we have nothing to make for dinner, if we’re exhausted and don’t feel like cooking and can’t bear another frozen pizza, we get a couple of pieces of baguette, dump half a can of beans on top, hand out the knives and forks, and we’re done. — Andy

PS: Cookbook owners, though the Maple Baked Beans on page 256 take 5 hours and 55 more minutes than this version, you will love having them bubbling away in the oven during any Sunday afternoon in autumn. They smell as good as they taste.

Though I may be the only person in the world to feel this way, I really dislike baked beans. I love beans in general, but I’ve never figured out what there is to love about baked beans.

I’m with you, Amanda. But I think my kids would love them. In fact, I’m thrilled about the idea of slapping them on some bread and calling it a meal. That might actually be dinner at our house tonight!
I love the title of this post, btw. I’m constantly searching for those “gateway foods” to (slowly) expand my kids’ food choices. Thanks!

B & M Baked Beans served with brown bread from a can, essential components of a New England childhood. Haven’t tried them on my kids yet, though, but perhaps soon. Great suggestion.

Two recipes got my kids to love lentils, Hearty Lentil Soup with Fragrant Spices from Cook’s Illustrated. The cinnamon makes it smell amazing. (http://www.cooksillustrated.com/recipes/detail.asp?docid=6022)
And a really simple vegetarian red lentil soup (onions, garlic, olive oil, canned tomatoes, broth, red lentils) that gets pureed and seasoned with a bit of lemon juice. Huge hits with my picky kids, especially if there is plenty of bread or biscuits for dipping.

We discovered bean sandwiches only about a year ago when that was the only possability for my vegetarian daughters meal at an event we were attending. I don’t call myself a vegetarian because I do enjoy some meat occasionally, but I usually pick the vegetarian option when posssable and I followed right along with her that night and I fell in love with it. I have to say I usually choose the canned baked beans, but I love them on a sandwich with cold slaw on top. I think I know what we are having for dinner tonight! Sad to say I thought we were the ones to invent bean sandwiches..tehe

Amanda, I totally agree, I also don’t like baked beans but I pretty much like every other kind of bean there is. Garbanzo, black, white, kidney, you name it. But I do also like the general idea of a gateway food for my son – he is very logical (for a 4 year old at least) and he will take to the idea that if he liked one type of bean (or whatever) then maybe he would like another type if he tried it. And we are lucky that he’s fairly willing to try a lot of different foods. As long as there’s no yucky sauce on it, anyway!

Read this post yesterday and it gave me my plan for last night’s supper for two. Instead of toast, I cut a large sweet potato in half and microwaved it, heated a can of “grilling beans” on the stove (adding some yellow mustard and saracha sauce for zip), and served them over the sweet potatoes with a little shredded cheddar on top. Yum

I’m a little late to the commenting here (just found your website via Brooke @inchmark), but this made me smile. One of my favorite dinners as a child was “Bean Buns”- leftover hamburger buns split, then topped with Campbell’s pork and beans and a slice of cheddar and broiled till bubbly. I think I’ll try it out on my kids soon. Thanks for the inspiration.

the “gateway bean” ha ha ha ha YES! I need one of those. My kids have rejected lentils, black beans, white beans, garbanzo beans, etc. Someone told me to try refried beans but I’m not seeing it. I will try the humble (and much loved, in my childhood) baked bean. Yes!

My picky eater daughter will eat refried beans on a tortilla. I was shocked and thrilled. Protein!

In England, they eat baked beans in jacket potatoes (baked potatoes). You get the crispiness of the potato, melted butter, gooey melted cheese and a generous dollop of baked beans (in tomato sauce). Lovely!