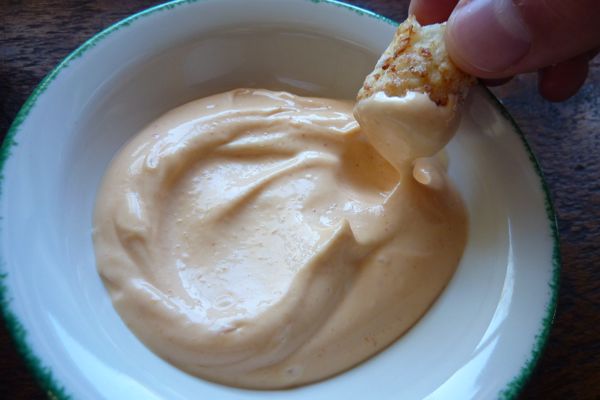 Universal law of childhood eating, #217: Kids like to dip stuff in stuff. At least, our kids do. They dip roasted potatoes in ketchup. They dip baby carrots in ginger dressing. They dip sausages in yellow mustard, cookies in milk, and breaded chicken in ketchup. They dip salmon in Soyaki, grape tomatoes in ketchup (not sh*tting you!), burritos in salsa, apples in Nutella, bacon strips in maple syrup, Hershey’s kisses in peanut butter, ketchup in ketchup in ketchup in ketchup. I’m not sure what evolutionary quirk is playing out here re: the dipping impulse, but as long as the food goes down, it is all good in the hood, right? A couple of weeks ago, I added another one to the rotation. It was Sunday night and we had grilled a couple of tuna steaks and I was standing in the kitchen, trying to think of something to help seal the deal with the kids. Tuna is not always easy. What goes well with it? Spicy mayo! So I made one, using Hellmann’s and Sriracha. (About 1 teaspoon Sriracha to every 3 tablespoons mayo.) It had a beautiful, peachy color. It had some serious umami action, without being too spicy. It went over huge. Not only that, I’ve since discovered it’s a pretty versatile tool. It’s not just for dipping, in other words. You can use this on turkey sandwiches, in canned tuna salad, in potato salad, in slaws, and, maybe best of all, with – yeah, you heard me Henry John Heinz – Tater Tots. — Andy

Ooo, definitely going to try this. We love Sriracha!

My toddler loves to dip. In fact, we just refer to ketchup as “dip.” She’s taken to dipping her veggies in ketchup, but whatever gets the job done!

Too cute! And hey – adults love to dip stuff too! 🙂

Mike is gonna love this.

My grandma mixed mayo and mustard and called it poor man’s hollandaise–I was not a fan, but my brothers would eat it with steamed broccoli!

dude. tater tots make the world go round. my 3 1/2 year old will eat anything. ANYTHING. if it can be dipped into something. those pork gyoza (sp??) dumplings in soy sauce are his new favorite and he doesn’t eat meat. also, the reason he likes your salmon and brussel sprout dish…he dips into that delicious ginger+scallion “dip”.

We discovered this delicious combo a few weeks ago – used it on bahn mi style turkey burgers (also amazing). I tried adding a little sweet pickle relish last time and it was seriously good too. Another variation to add to your dipping arsenal.

Ha. We love the spicey mayo around here. We own a little restaurant on the Canadian border and when we’re not serving spicey mayo with sweet potato fries, were putting it on our burgers and slathering it on our sandwiches all. the. time. Best sauce!

2) What a great idea! Never would have thought of it.

We’ve gone down the spicy mayo route as well. My favorite version is Hellman’s, one or two chipolte peppers, some smoked paprika and a pinch of coriander all whipped up in the blender. Delicious.

I’ve been eating this for some time, will almost. I don’t like ketchup, so I needed a dipping sauce.

So, like your mayo and Sriracha, but I add a bit of Dijon Mustard, too.

My husband and I also put mayo-Sriracha on sweet potato fries – it is really amazing.

Looking at the picture I thought it was going to be what we in Utah call “fry sauce” ketchup and mayo mixed. Turns out the same orange color. Add that one to your arsenal.

I do like it. Mayo with soy sauce stirred in is pretty magical too (try it with artichokes).

I love that your kids will eat Sriracha – that’s fantastic! We do a mix that’s 50/50 Sriracha/mayo and haven’t found anything yet that I don’t love it on. I love to make a weeknight banh mi that’s just some grilled chicken, quick pickled carrots in rice vinegar, and Sriracha mayo. Delicious!

My son dips raw carrot sticks in ketchup. Weird, but you should see the quantity of carrots he can put away, as long as they’ve been ketchup-ed! We’ll have to try this one next.

Ooh we have a burger joint in St. Louis that has this sauce… it’s called Rooster Sauce! I love it with fries. If you’re ever in town, try out their delicious burgers (and boozy milkshakes)… it’s called Bailey’s Range.

Haha! My brother and I have never liked ketchup. When we were younger my dad was always said, “I don’t understand! Ketcup was MADE for kids!”

For a real treat add ponzu (it is a citrus soy sauce-lime is best) and if you can’t find the lime ponzu, add a splash of lime juice with the lemon ponzu. I put it on everything, and it makes a great base to a creamy salad dressing (bleu cheese ESP).

an awesome grilled cheese place in my hometown mixes sriracha and ketchup to serve with… TATER TOTS! it’s actually kind of delicious. and i may or may not have recreated it at home… psyched to try the sriracha mayo too!