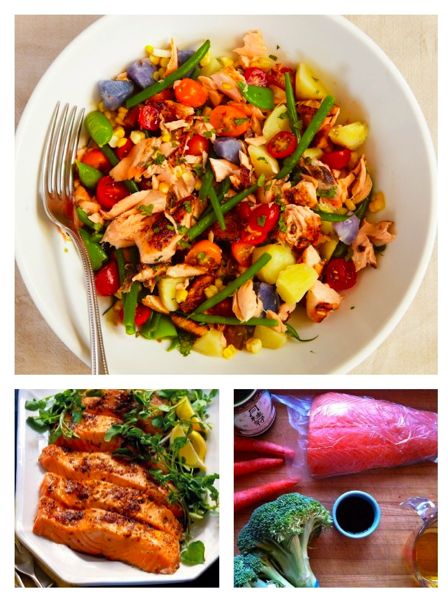 I know this is likely to ruffle a few feathers, but I’m going to say it anyway. Ready for it?? Here we go: Weeknight Entertaining is the New Dinner Party.

You heard it here first, don’t forget that.

So, um, why? Why would any of us want to throw one more variable into the dinnertime scramble? One more variable who actually needs to be fed? Simple: Because the bar is so much lower. As much as I love to have people over on a weekend night, it’s a production. And that’s good. I like some theatrics on a Saturday night. That’s what Saturday night is about when you are over 40 and your idea of excitement includes a Baltimore Oriole sighting during your morning run. (Forreal!! Right at the bottom of my street!)

But the other night, our friend Kendra came over for dinner. It was Monday, kind of a last-minute plan, and since we had already decided on Salmon Salad for dinner — I’m telling you, the recipe is MVP in our house — that was going to be the meal. No special cocktail, no special meat and cheese starter, or homemade dessert. (At least no homemade dessert homemade by us; Kendra rocked our world with this little number.) Starters would be chips and salsa; the milk glasses would be set on the kitchen table (not the dining room table) by Phoebe; and Kendra would essentially be folded into family dinner. When expectations are low, you can only be a hero.

Anyway, igniting dinner party trends (just watch!) was not supposed to be point of today’s post. What I really wanted to remind you about was how amazingly easy salmon is for weeknight cooking, dinner guest or not. That Salmon Salad (page 62 of DALS) is so clutch. This time, I tweaked the technique a bit — I used yellow potatoes and tossed them in the dressing before tossing the rest of the salad, so they were like silky German-Potato-Salad potatoes. It’s the only way I’m going to make it from now on.

I’ve also been looking for an excuse to really sing the praises of this Salmon with Mustard-Brown-Sugar Glaze over at Martha. I’ve linked to this before, but I just need to say again how genius it is. With red wine vinegar and sugar in the glaze, it has the sweet-and-sour thing going, and it could not be easier to whip together. The first time I made the recipe, Abby declared it the best salmon she’d ever eaten, and seven or eight times later, she still stands by that claim.

Lastly, there’s this basic salmon teriyaki recipe that is a good compromise to have in your back-pocket when, say, the kids are begging to go to the local Japanese place for dinner instead of Not another boring chicken, pleeeease? With a side of sushi rice and some magic teriyaki onions, it tastes like the version they order in the restaurant, only it’s a heck of a lot cheaper.

Preheat broiler. In a small saucepan, whisk together everything except the fish. Let it simmer about 10 minutes until reduced and slightly syrupy. Brush sauce on top a salmon and broil for 10-12 minutes (depending on thickness of salmon), brushing sauce on every four or five minutes to get a nice caramel-y color. Serve with sushi rice and teriyaki onions.

We do most of our (dinner) entertaining on weeknights, actually! I joke to my mom that I’m bringing back the dinner party one Thursday at a time 🙂 Glad to see others do it too. It’s so much easier (you have to make dinner anyway), there’s a time limit for people to stay or we can kick them out with no remorse (have to go to work tomorrow!), and it feels like such a treat to have friends over during the week.

our neighbors have been inviting us over on weeknights and its so refreshing! i need to get a little ahead of the game and prepare something in the morning that can easily be slid in the oven before i get home and plated right away. oh and i need to clean house too.

What are the chunks of blueish purple in the salad? I don’t think they are potatoes. Are they onions or shallots? I am embarrassed to admit that I don’t do salmon so it is a page turner for me. BUT this salad looks so delicious. Do you think it could be made with chicken instead?

I had to throw something together last minute for a grill out, and did Ina Garten’s Asian Salmon – so delicious, and so easy! So there, anecdotal evidence that salmon is the best, amazingly easy and yummy!!

In spring and summer I’m totally with you. We always up the meat a little bit on the green egg grill hoping it will lure a neighbor or two over. It normally does and we have the best (and relaxed!) times.

@Bea, they are purple potatoes. That photo was taken in September when they were all over the place. As for the chicken — you can of course replace it. Then you can call this “Salmon Salad Hold the Salmon.”

Was the oriole sighting a bird or a baseball player? (I assume the bird, though either would be fun!) Thanks so much for this gentle reminder about “entertaining”—it’s so much easier when it can just be about “doing life with people.” And I love salmon—-yummy.

Not quite first (http://theyellowtable.com/day-58-midweek-dinner-parties/), but I agree that it is a great idea as it’s way less pressure.

I think you are on to something. I just had my two nieces over for dinner tonight and we love “folding people”into family dinner.

@Jenny, Wow they ARE potatoes? They are beautiful! I love the gorgeous pop of color they provide. I am definitely going to put this on my monthly menu. I am tired of all of the stale (winter) meals on there and with spring coming (I am in NY too and I am hopeful it will finally be here here next week) this looks like the perfect addition. Thanks Jenny. I love your blog and your book.
Can’t wait for the new one too. Happy weekend!

In my continued exploration of your cookbook (I was in a rut of making the same few recipes from your book, but have been trying to branch out!), I made the Salmon Salad last week, and I LOVED IT. It was easy, it was fresh, and it was delicious. It also made for very tasty leftover lunches for a couple of days!

Once again, I relate to your every word. We pretty much only entertain this way, especially as parents of an almost-two-year-old. And, my husband is a rookie cop with Mondays and Tuesdays off.

Anyway, thanks for linking to the Martha recipe. I’m going to try it tonight.

Don’t forget Royal Salmon. That is a favorite of mine, made at least once a month. Healthy, easy, tasty. Ticks all the boxes. I’ll give these a try too when I wear that out.

I love dinner entertaining on a weeknight. With 3 children 4 and under inviting a friend with similar aged kids makes the “witching hour” a bit less witchy for all of us. The children have a playmates to keep the, from fussing and it is easy to stretch the salmon or chicken a bit further. Plus everyone goes home at a reasonable hour. Win win win.

Monday night is the new Saturday night!!! Dinner was the best, guys. Thanks!