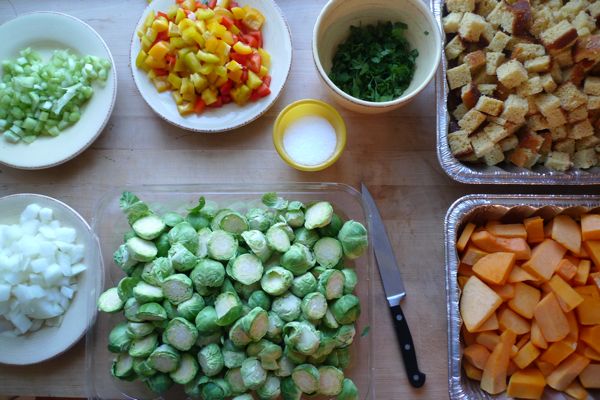 Given that I woke up yesterday at 3am worrying about how early I need to leave work on the day before Thanksgiving to make sure I get my pumpkin pie made in time for a seamless departure the next morning, now seems like the perfect time for the last installment of our series featuring Sam Sifton and his new book, Thanksgiving. As we head into the final weekend before the feast, we asked him for advice on planning ahead — more specifically, we asked him what three things he takes care of in advance to make the big day a little less stressful. In his (elegant, reassuring) words:

I do this on the weekend in front of Thanksgiving, usually on Saturday night, as a way to say to myself: This thing is starting now. I dump a bag of berries into a pot with some sugar and orange juice. I get that cooking and wait for the berries to start to pop and bubble. It’s the culinary equivalent of priming a pump. It gets me started. As the sauce cooks, I sit in the kitchen and make lists I should have made days and days before. I make lists of dishes, ingredients, guests, needs, wants and, crucially, jobs. By the time the sauce is done — and that, by the way, is when a goodly portion of the berries have popped and released the pectin that binds the dish together — I have a pretty good idea of what I need to get done in the next couple of days. I dump the sauce into a serving bowl, let it cool off and put it in the fridge under some aluminum foil. There’s that job, DONE. I cross cranberry sauce off my list.

Too many people come to the idea that they’re going to brine their turkey on Wednesday morning (even Thursday morning!) and that is a little late in the game. Better to make the brine on Monday night, tip the bird into it when it’s good and cool, and then remove it on Wednesday morning so you can dry it, first with paper towel and then in the cool air of the refrigerator. That way, when you do cook it on Thursday the skin of the bird is really and truly *dry*, important because then the heat of the oven won’t have to evaporate anything before it gets to work tanning and crisping the bird. Science! It’s a Thanksgiving secret weapon.

Or ensure that someone is making them. It’s hard enough dealing with all the stress of cooking the savory side of the meal on Thursday when you’re also trying to bake sweets. That’s why pastry chefs get to work at three in the morning. The kitchen isn’t as hot as it is when the line cooks are in there, and the butter and lard in their dough doesn’t melt until it should. Make pies on Tuesday night. Make them on Wednesday. They’ll be better for your thinking ahead, and you’ll have more things crossed off your list on Thursday morning besides.

You can even make and freeze whole fruit pies now, then bake them on Wednesday. (Instructions here.) Or if you’re making custard pies, you can roll out and freeze the dough now.

I’m the master of squeezing pie-making into the little crevices of free time I have with the help of the freezer!

I am making the pies for my mom – Wednesday before Thanksgiving it is my zen to do the pies.

And if you are in the make-ahead mood, double the cranberry sauce recipe and freeze some (Ball canning jars can go right in the freezer, or a ziploc bag will work too.) You will have homemade cranberry sauce for some future roast chicken dinner this winter.

Great idea on the cranberry sauce… And the brine timing. We’re hosting Thanksgiving this year, for 25 people. (Gulp.)

I roast a few turkey legs on Sunday evening and make stock so gravy becomes less of a last-minute scramble. As an added bonus, my husband is assured of his favorite part of the bird and can be effortlessly gracious on the big day.

the brine tip is key. i was going to start on wednesday but now i know i need to start on monday. great tip.

Funny, I was writing about the same topic yesterday. My five are more global; love the three specific jobs here. Here’s another specific, although it may be shocking:
We roast our turkey on Wednesday! For real! We’ve never gotten into the whole “present the bird at table” thing, so we do the deed the day before at our leisure, carve, wrap, and chill the meat to be reheated on Tday. Benefits:
1. Fridge space frees up faster.
2. OVEN space free on Tday, which is huge.
3. Gravy can be made a little earlier than normal and kept on the simmer burner.
4. Stress is reduced.
It works for us.

Fabulous! And my daughter (who’s 12) just informed me last night that she would like be in charge of pie making.

I have always been the queen of the Wednesday brine, and now I know better! Question, though — before roasting, I always rub a mixture of butter and herbs under the skin of the bird because I feel like it makes it special. But does the moisture from the butter keep the skin from getting that beautiful brown crispiness? I do always feel like that’s lacking and I’m not very good at science.

How excited I was to see Sam Sifton on ABC’s The Chew. I felt like a bit of an insider. Also, he was very witty!

Love the idea of brine and cranberry sauce. I’m preparing for 20 guests for Thanksgiving.
Now I have to make more room in the fridge and relax!
Maybe I’ll look for someone else to bake the pies.

This sites reveals the thing that, most of the love builds with a dinner together.

Thanks for this outstanding recipe. I absolutely love cranberry sauce. Going to giving this one a try!