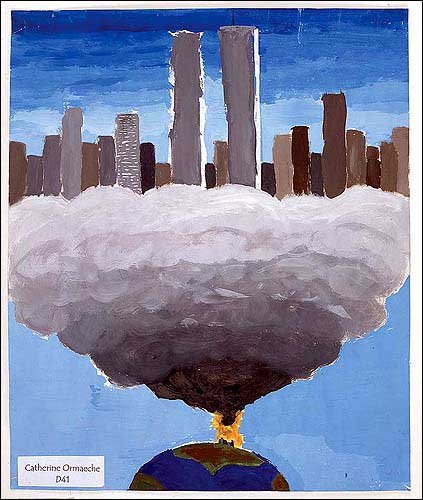 “Who?” Phoebe asked when she heard her parents talking (rather animatedly) about the death of Osama bin Laden.

“Osama bin Laden,” Andy said. “You know? The guy who made those two buildings come down? He’s dead.”

To hear Andy oversimplify the most harrowing day in both of our lives like that made me think that maybe by now we should’ve talked about it with our kids a little more comprehensively. Because to express someone’s death, out-of-context, with even the slightest hint of satisfaction has got to be confusing for a nine-year-old. I was four months pregnant with Phoebe when the towers came down. I spent the day tracking the news of my best friend’s husband Michael, who worked on the 81st floor of the first tower to be struck. He survived by picturing his wife and six-month-old son living their lives without him, as he clawed around in darkness and rubble trying to escape.*  How could we expect anyone (let alone a kid) to wrap their head around that one — or any of the other far more traumatic details of the day for that matter? But at the same time, how can it possibly be that neither of my children have any visceral reaction when they walk by our favorite 1997 wedding photograph: Andy and me and all 142 attendees standing on the Brooklyn Heights Promenade, the towers gleaming in the sun behind us like two honored guests themselves.

In other words, I was grateful when I saw my friend Claudia’s facebook status update announcing that she had just posted about OBL on her news website for kids Here There Everywhere. Claudia isn’t just someone with a passing interest in the news — she was a producer for the Today show until she became a mom seven years ago (on 9/11, while I was watching the news, she was in a gas mask at Ground Zero helping report the news) but in some ways never left the job. She’d read the headlines to her kids when they were in the bath (calling this “The Bathtub Report”) and later started discussing current events in her son’s second grade class. On the site, Claudia writes to elementary-school-aged students without talking down to them (“The world’s number one bad guy was killed yesterday”) and gives just enough information to spark a kid’s interest. So now, when I’m making dinner and Phoebe asks if she can play on the computer, lately I’ve been going all Joe Kennedy on her (official Kennedy family dinner table policy: If you didn’t talk world affairs, you didn’t talk) and tell her to pick a topic of conversation for the table from HTE. That way, even if we don’t figure out how to explain all the answers, at least we can say we’ve started the conversation.

Illustration is by Catherine Ormaeche and is from the book The Day Our World Changed: Children’s Art of 9/11 (Abrams).

*Andy, who was working at Esquire at the time, somehow convinced Michael to tell his amazing story to the world two months after the attack.

Hi, thanks for sharing. And sorry for the pain you have gone through since the attacks. I never comment on blogs (that would be my “page turner” = comments. But I wanted you to know that I found your comments on Bin Laden thoughtful and caused me to think of how to better talk to my kids about current events, like the earthquake in Japan that my dad survived but certainly still moves us. Anyway, thanks for the link to H, T, E and for your great website – we love cooking with you! Best, Lilly

Thank you for this. My husband and I discussed if we should or shouldn’t tell our daughters about the killing of Osama bin Laden. I hate that they have to know about how much evil there is in the world. My 10 yr old came home yesterday talking about it, thank you for this link that will help me put it into child-sized words.

Wow. Thanks for sharing the Esquire article. It is the most gut-wrenching thing I have ever read. As my local Congressman said, I feel bad for the sharks who have to eat Bin Laden. What a monster. I hope his death brings some sense of relief/calm/happiness to those affected in 9.11. Your friend is a hero!

thank you for this post. we haven’t really started that discussion but I feel like we are getting there. and that it is important.

Thank you for posting the link to the Esquire article. I am sitting at my desk with tears running down my face. I have not read such a visceral account in years. While the searing pain of those few days and months in 2011 comes back, I feel inspired. Bravo, Andy, for the foresight to capture what at the time was an important account in the almost immediate aftermath, but now 10 years later is an important reminder of, as Michael himself said, what people are capable of – good and bad. Most important, you did it in such a sensitive, respectful way.

I didn’t know about Here, There, Everywhere. What a great resource! Thank you Jenny!

Thank you for sharing that website. My boys are 9 and 11 and definitely interested in chatting about what’s going on in the world, including the death of OBL. My oldest son obtains most of his news info from his friends, which is often very embellished, before we have the chance to talk with him about it, so it’s nice to find a site that he can access for good information.

Thank you for this. I spoke to my 11-year-old about this a bit yesterday, but I don’t feel like the conversation is over yet.

Subscribe to TIME for kids. It’s so worth the money. My children are US born with two parents from elsewhere. I love that they know what’s going on in the “whole, wide world” even if it is at a simplistic level. They can join in conversation with a bit of background information and it’s so much more stimulating.

I love Claudia’s site !! Thanks for the heads up

Excellent links today, all, but the Esquire link was one of the most gripping things I’ve ever read. It took me right back to that day.

I clicked over to read Michael’s article and should have known better. Eating a late lunch and decided I could take a few minute break, now tears are streaming down and the few minute break has turned into a half hour one. Thank you for sharing both sites. I don’t have children yet, but I have wondered how I would go about explaining that day to them. Or something like Sunday night.

Thank you for sharing the Esquire article link. It was heart wrenching and I am in tears, but it has given me time to reflect and express thanks. I continue to pray for all survivors and hold them in my heart.

Thank you so much for sharing the story in Esquire. I’m far on the other coast and have vague memories of 9/11. Thanks for sharing some insight.

Nearly 10 years later, and it’s still so raw. Thank you for sharing the Esquire link. Tears, of course. I’m grateful that my kids, at 3 and 1, can still be shielded from the news and for a good resource to help when they get a bit older.

Michael’s article is the most profound, human thing I’ve read about that day.
My nine year old, whom I was pregnant with that day, knows the story of 9/11 and followed the recent news closely—but now I need to answer my six year old who wants to know what I was reading this morning that has made me cry. I’d much rather he know Michael’s name and that story of survival than be introduced to the history with Osama’s name.

Thank you. Tears streaming down my face from the Esquire article. I have three boys (one that I was pregnant with at 9/11) and I have no idea how to talk about the bad things in the world. It is just too overwhelming sometimes. That link will be very helpful for me.

Thanks so much for this link – it’s really awesome. Our conversation with my 8-year-old went something like this:

Dad: Did you talk at all in school about Osama Bin Laden?
Kid: No. Who’s that?
Dad: Well, he’s a very bad person who the US soliders finally got.
Kid: How bad?
Dad: Very bad. The worst.
Kid: Did he … *pause* … hurt animals?
Dad: Uh … well … worse than that.

At this point, I changed topics. I figure that when hurting animals is as bad as you can get to my son, I don’t want to be the one to break it to him that there’s so many more horrible things in the world than that. Pandora’s Box will stay closed a little bit longer in our household…

But that site does an amazing job of explaining the tough issues.

In winter the actual ugg sheepskin boots Australia wall socket gets the really advantageous materials to assist you maintain support instead of that will its polar environment cool, it is made welcome deliver offthe globe and has a great number of the actual insane funs ugg sheepskin boots wall socket keep, it really is real require the various charming ugg Quarterly report wall socket inside the chilly [url=http://www.bootsdomain.com/]uggs on sale[/url]
[url=http://www.bootsdomain.com/ugg-australia-bailey-button-boots-chocolate-5803-p-24.html]UGG Australia Bailey Button Boots Chocolate 5803[/url]